Inside The Molly Maguires, The Secret Society That Fought Bloody Battles For Workers’ Rights In The 1800s

When mine owners cut wages in 1870s Pennsylvania, the Molly Maguires fought back. But with a private military on their side, the mine owners ultimately won what would become the first labor war in U.S. history. 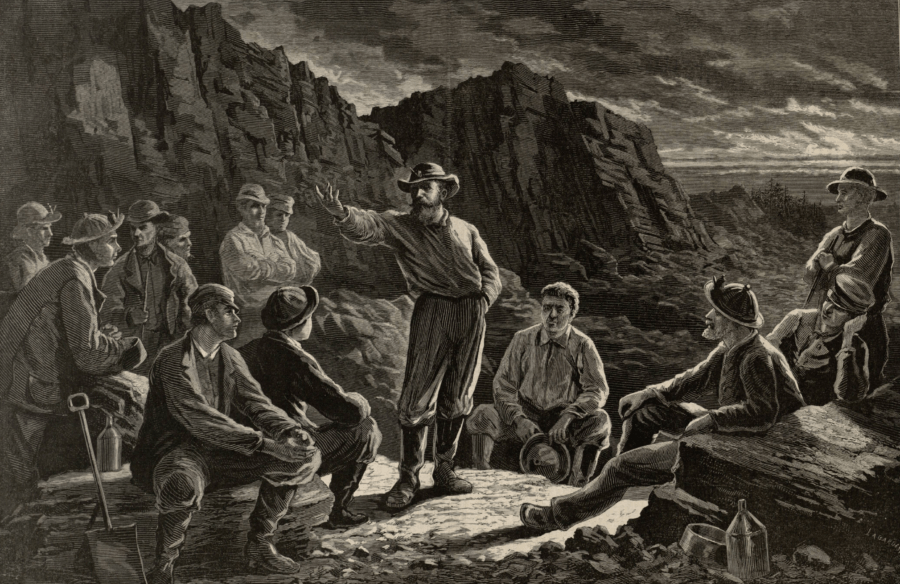 In the 1870s, the Molly Maguires assassinated 24 mine foremen and supervisors and sent “coffin notices” to scabs during mining strikes. The secret society carried out assaults, arsons, and murders for years before a Pinkerton detective infiltrated the organization to bring them down from the inside.

The Molly Maguires fought for better working conditions in the deadly mines of Pennsylvania. But their violent methods caught up with them in a trial that sent twenty men to the gallows. Were the Molly Maguires vicious murderers or desperate workers fighting for their rights?

Who Were The Molly Maguires?

The Molly Maguires were a secret society of Irish mine workers. They borrowed their name from a secret society back in Ireland, where members dressed in women’s clothes to disguise themselves.

According to one legend, a widow named Molly Maguire led the Irish protestors in a group called the “Anti-landlord Agitators.” The gang adopted her name as their calling card when fighting against English landowners.

Like the Irish Molly Maguires, the American society fought against injustice – including their treatment in the mines.

The Great Famine drove over a million Irish immigrants to America. In the 19th century, many businesses discriminated against the Irish, even hanging signs saying “Irish need not apply.”

In Pennsylvania’s coal country, many Irish immigrants took jobs in the mines.

The Molly Maguires first appeared during the Civil War. Angry at being drafted into war and frustrated by terrible working conditions, Irish immigrants lashed out at mine officials. 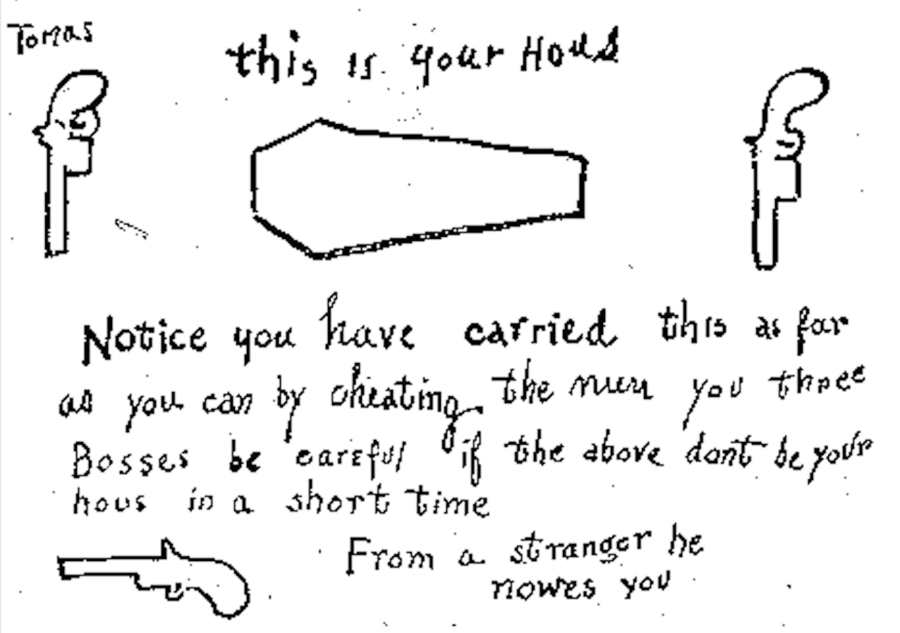 Unknown/Wikimedia CommonsA “coffin notice,” or death threat, presented at the trial of the Molly Maguires.

The secret society quieted down in the late 1860s when the mineworkers joined a labor association. The Workingmen’s Benevolent Association (WBA) successfully negotiated higher wages – until Franklin B. Gowen, a railroad man, gained a monopoly over the coal mining industry in Pennsylvania.

Under Gowen’s harsh rule, the Molly Maguires reappeared – and so did their violent methods.

Conditions In The Mines And The Long Strike of 1875

Mine workers faced horrific conditions in the 1870s. Schuylkill County employed 22,500 miners, which included over 5,000 children as young as five.

With few safety regulations, working in the mines took a deadly toll. Owners also wrung profits from the miners by forcing them to live in company-owned housing and shop at company-owned stores.

Many workers ended the month owing money to their employers rather than making any wages.

After an economic depression in 1873, mine owners forced a new contract on the workers. Pay rates dropped by as much as 20%. In response, the miners went on strike.

During the Long Strike of 1875, which stretched on for seven months, the owners and miners battled each other. The Molly Maguires began sending anonymous threats to supervisors.

Pennsylvania’s governor even sent troops to break the strike.

Miners were forced to accept the lower pay – but some turned to violent methods to exact revenge on mine owners.

The Bloody Battle With Mine Owners

During the Long Strike of 1875, the WBA fell apart and the miners quickly realized the legal system offered few protections to immigrants and members of the working class. The Molly Maguires rose up to fight for the mineworkers.

The Molly Maguires targeted three groups: mine owners, policemen hired by the owners, and strikebreakers. They threatened scabs who took over their jobs and assaulted mine supervisors.

As the strike dragged on, the coal owners created their own police force to attack the strikers. Known as the “Pennsylvania Cossacks,” the hired enforcers beat and killed miners.

The violence continued so Gowen, president of the Philadelphia and Reading Coal and Iron Company, took more drastic measures. 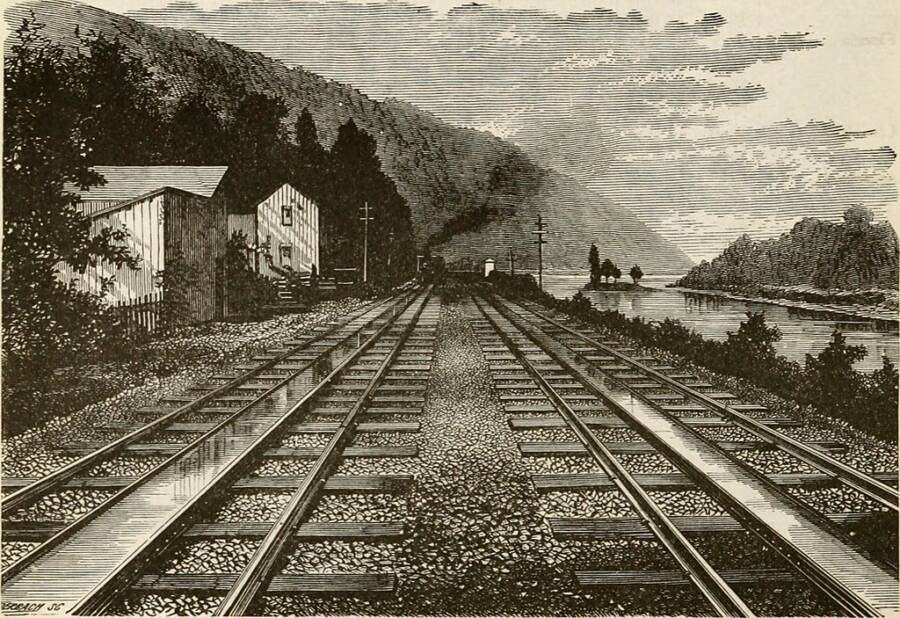 Albert Bolles/Wikimedia CommonsFranklin B. Gowen owned railroads and mines, and he personally prosecuted the Molly Maguires.

Gowen responded to the Molly Maguires by calling in the Pinkerton Detective Agency.

Allan Pinkerton, the first private detective in the U.S., was known for his brutal methods against strikers. In the second half of the 19th century, mining and railroad owners often turned to the Pinkertons to act as a private military force.

To undermine the Molly Maguires, Pinkerton sent in an undercover detective. James McParland, an Irish-born detective, spent over two years as an undercover agent in the secret society. 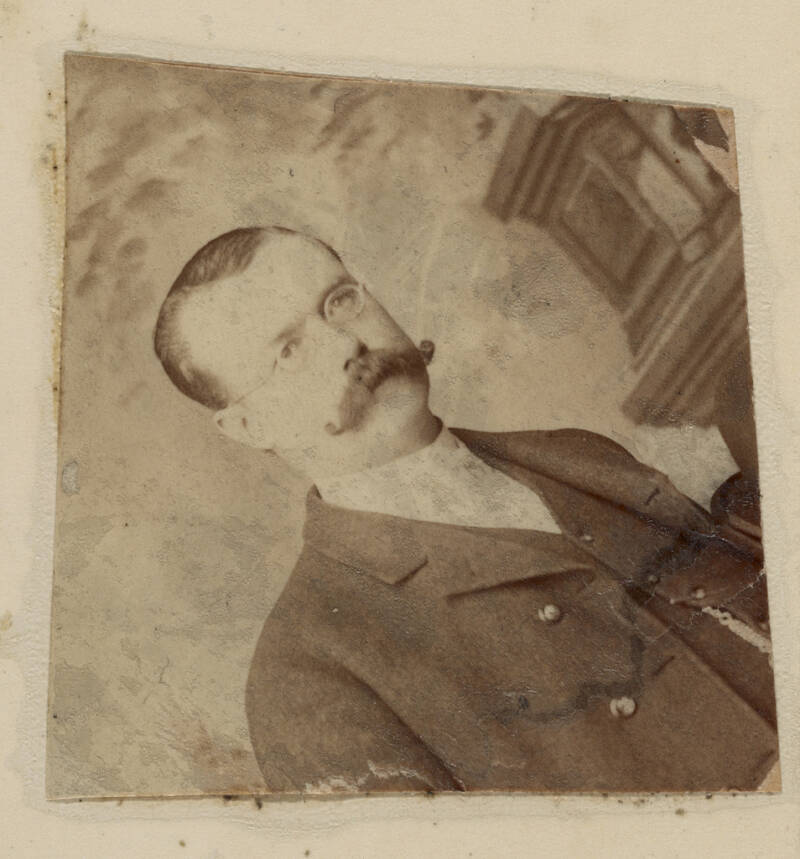 Under the alias James McKenna, McParland joined a local Irish lodge and eventually gained the trust of the Molly Maguires. McParland sent regular reports to the Pinkertons, who used his information to target and kill several miners.

In 1875, the police arrested 60 members of the Molly Maguires, who soon faced trial.

The Murder Trials And Death Sentences

James McParland acted as the star witness during the trials, which lasted from 1875-1877.

But Franklin Gowen also played a central role as the chief prosecutor, even though as the mine owner he had hired the Pinkertons to infiltrate the Molly Maguires.

During the trials, in front of juries with no Irish members, Gowen built a case against the Molly Maguires. Outside the court, Gowen spread pamphlets featuring his courtroom speeches.

The evidence presented in court often fell short of legal requirements. Aside from McParland, most of the evidence was circumstantial or easily refuted. McParland himself faced an accusation of perjury.

Based almost exclusively on McParland’s testimony, the trial sentenced 20 men to death. On June 21, 1877, a day known as Black Thursday, ten members of the secret society faced death together on the gallows. 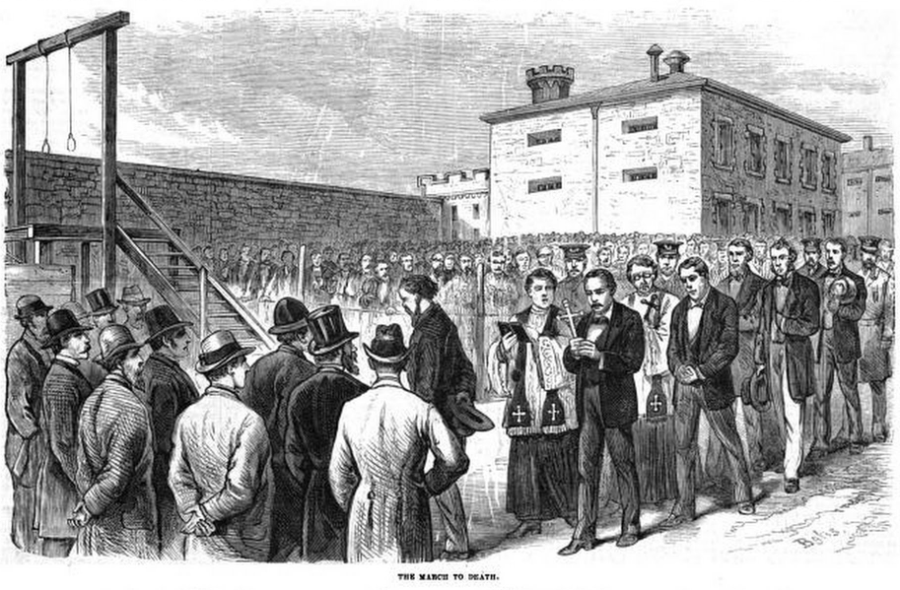 Before the convicted men faced execution, the Catholic Church excommunicated them, denying the men last rites or a Christian burial.

One Pennsylvania judge criticized the trial. “A private corporation initiated the investigation through a private detective agency. A private police force arrested the alleged defenders, and private attorneys for the coal companies prosecuted them. The state provided only the courtroom and the gallows.”

The mine owners and the miners both turned to violence in the 1870s. Company police fired into union meetings and killed the wife of a union organizer, while the Molly Maguires assassinated mine supervisors.

But only the Molly Maguires faced legal consequences for their actions.

In 1979, the state of Pennsylvania granted a full pardon to John Kehoe, sometimes called the king of the Molly Maguires.

The Molly Maguires weren’t the only workers fighting for fair treatment in the 19th century. Learn more about the violent history of the labor movement and then read about the Haymarket Riot.