Hessy Levinsons Taft's photo was secretly submitted to a Nazi beauty contest. Out of 100 photos, they picked her, not knowing she was Jewish. 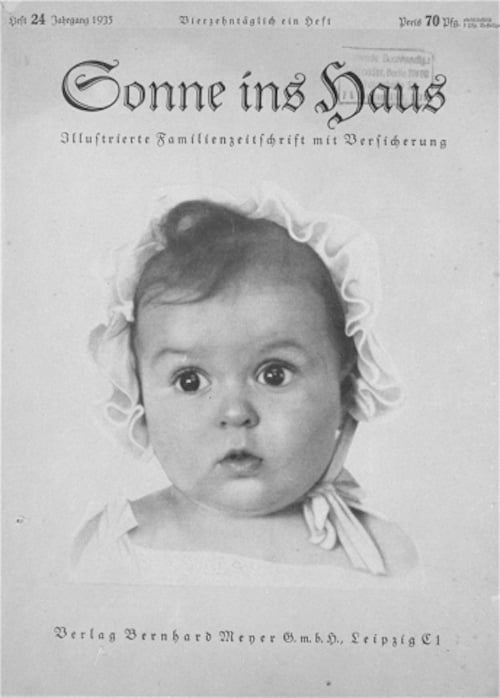 First, the photo of the wide-eyed, chubby-cheeked baby girl adorned the cover of a Nazi magazine claiming to have found “the perfect Aryan.”

From there, the image spread to postcards and billboards, making its way across Nazi Germany. It was meant to be an example for parents everywhere of the ideal template for the “superior race.”

Little did they know, the girl was actually Jewish.

The photographer, Hans Ballin of Berlin, originally snapped the image in late 1934 as a standard baby photo for Taft’s parents to keep. But then, he secretly submitted her photo to the magazine’s Aryan beauty contest — and she won.

But Hessy Levinsons Taft’s incredible story doesn’t end there. In 1990, she detailed her entire journey for the United States Holocaust Museum.

The story begins when Taft’s parents, Jacob and Pauline Levinsons, came to Berlin in 1928 — just a few years before Hitler took power.

The young couple, who were both Latvian Jews, dreamed of becoming famous singers. But with anti-Semitism on the rise, they couldn’t get work. Broke and living in a tiny apartment, they gave birth to their soon-to-be-famous daughter on May 17, 1934.

“My mother took me to a photographer, one of the best in Berlin!” Taft recounted. “And he did — he made a very beautiful picture — which my parents thought was very beautiful.”

The proud parents propped the photo up on display in their home. They were understandably surprised when, a short time later, one visitor said she recognized it from a magazine.

In disbelief, Pauline asked the woman to buy her a copy. And sure enough, there was her daughter’s face on the cover.

Horrified to see their baby girl on the cover of a prominent Nazi magazine, they called Ballin. He told the frantic Pauline to calm down.

“I will tell you the following,” Taft says he told her mother. “I was asked to submit my 10 best pictures for a beauty contest run by the Nazis. So were 10 other outstanding photographers in Germany. So 10 photographers submitted their 10 best pictures. And I sent in your baby’s picture.”

They were trying, he went on, to find the “perfect example of the Aryan race to further Nazi philosophy.”

Pauline was still confused. Ballin had been well aware that Taft was Jewish.

“Yes,” he agreed. “I wanted to allow myself the pleasure of this joke. And you see, I was right. Of all the babies, they picked this baby as the perfect Aryan.”

“I wanted to make the Nazis ridiculous,” Ballin said.

The photo continued to spread and the family took a secret pleasure in the irony of it. For Taft’s first birthday, her aunt even bought her a card with her own face on it.

Taft settled in the United States in the late 1940s. She went on to get married and become a chemistry professor at St. John’s University in New York. Now 83, she’s still on the university’s faculty.

Eventually, Taft’s family fled to Cuba, where they were faced with another dictator.

“‘I have survived Hitler; I will survive Castro,'” Taft remembers her father saying. “And he did. He did.”

In 2014, Taft presented the original magazine cover that her mother had bought to the Yad Vashem Holocaust Memorial in Israel.

“I can laugh about it now,” she said. “But if the Nazis had known who I really was, I wouldn’t be alive.”

After learning about Hessy Levinsons Taft, the not so perfect Aryan baby, read about Julian Bilecki, the teenager who saved dozens of Jews from Nazi death squads. Then, discover the little-known story of John Rabe and the other Nazis who helped defend Chinese civilians from being massacred by the Japanese just prior to World War II.