Around 75 artifacts—including some that were likely used by Hitler himself—were found in a hidden room inside a collector's home. 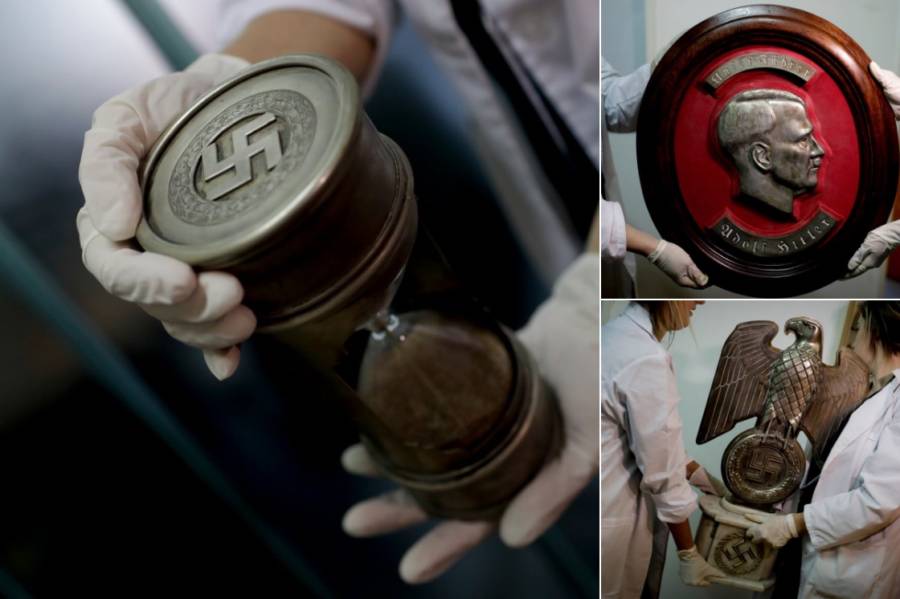 Twitter/APSome of the items uncovered in the recent raid of Argentina’s largest-ever stash of Nazi artifacts.

The largest collection of Nazi objects in Argentina’s history was discovered outside of Buenos Aires this month.

Around 75 artifacts — including some that were likely used by Hitler himself — were found in a hidden room inside a collector’s home.

Among the disturbing items were magnifying glasses engraved with swastikas, a bust of Hitler, a box of harmonicas, and a scary-looking medical device used to measure heads (an ethnocentric technique used by Nazis to distinguish “Aryans” from Jews).

Authorities suspect that many of the pieces belonged to high-ranking Nazi officials. This theory is supported by photographs found with the collection — one of which shows Hitler using a magnifying glass like the ones confiscated.

“We have turned to historians and they’ve told us it is the original magnifying glass (that Hitler used),” Nestor Roncaglia, the head of Argentina’s federal police, said. “We are reaching out to international experts to deepen (the investigation).”

Investigators had been tracking this particular collector for awhile — since the illicit artwork was found in a local gallery — and they raided the house on June 8.

Ironically, they found a large, suspicious-looking bookshelf that turned out to be a hidden door. Behind it, a secret passage led to a room filled with Nazi paraphernalia.

The collector, whose name remains confidential, is still free, but under investigation. Authorities are still unsure of how he came to possess these original pieces.

They suspect that they were brought to the South American country by Nazis fleeing after World War II. The infamous Josef Mengele and Adolf Eichmann were among the many Holocaust masterminds who chose Argentina as their getaway destination. Both of them settled in houses near where the objects were found.

Despite being on the run from war crimes charges, these escapees apparently had time to pack some heavy cargo. A massive, swastika-engraved hourglass, a gold eagle sculpture sitting atop a swastika pedestal, toys that would have been used to indoctrinate Nazi children, a trumpet and some silverware were also found among the disturbing stash.

Police believe they found the biggest collection of Nazi artifacts in Argentina's history. Where should they go? https://t.co/SZrFNiMV1T pic.twitter.com/lLvwGEnJ3t

“There are no precedents for a find like this,” Roncaglia said.

Next, read the little-known story of the Nazis who defended China from the Japanese. Then, learn about the American arm of the Nazi party before and during World War II.