If it weren't for the selfless help of two strangers and their own creative thinking, Curtis Whitson and his family may never have been found. 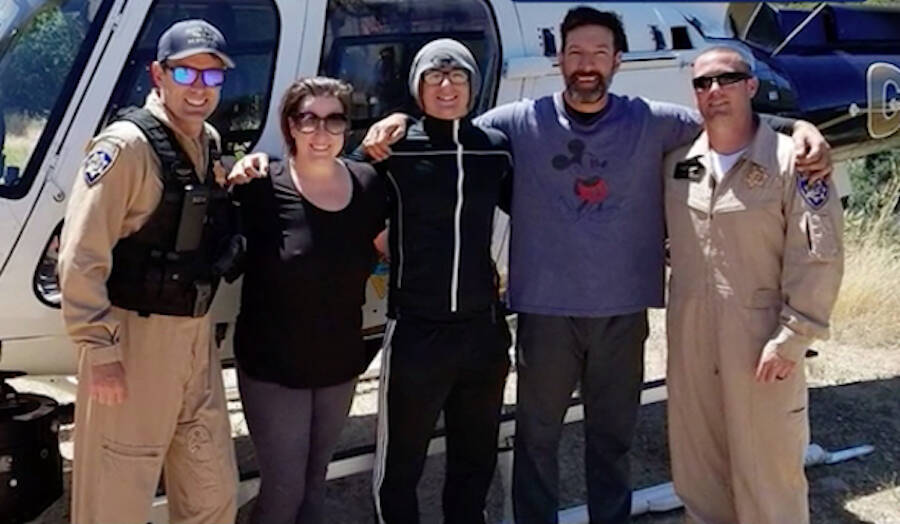 CNNCurtis Whitson had traversed the route before, but torrential currents and lack of rappelling rope trapped him and his family.

Curtis Whitson and his family might not have survived Father’s Day weekend if it weren’t for two proactive strangers. What started off as an adventurous backpacking trip in Pfeiffer Big Sur State Park in California quickly turned into a life or death situation.

According to CNN, Whitson, his 13-year-old son, and girlfriend Krystal Ramirez wanted to reach the Arroyo Seco Canyon, where friends would meet them below a waterfall to float along the last few miles toward camp.

After more than two days of carrying 50-pound packs, they finally arrived at the waterfall. Ensconced by 40-foot-high rock sides, it’s a substantial landmark — and that particular day, the water currents were especially strong.

“My heart sank when I realized the volume of water was just too dangerous to make rappelling down possible,” said Whitson. What followed was a series of futile attempts to overcome the elements.

Whitson and his son tried to find a way out, but kept hitting dead ends no matter which way they turned. Rappelling down, though dangerous, would still be a viable option, as climbers typically leave the necessary carabiners bolted into the rock side — usually, that is.

“This time, the rope was gone,” said Whitson.

In the end, their survival efforts were successful through an unlikely method: sending a message in a bottle.

A CBS 17 segment on the family’s harrowing survival story.

The group had a limited view of anything past the canyon walls but could hear voices emanating from beyond. The naturally loud torrents of water prevented them from being heard by anyone but themselves.

Whitson carved a message into a stick and tossed it over, but nothing came of it. When he spotted a lime green water bottle nearby, he carved “HELP” into its plastic exterior and tried again.

Fortunately, Krystal Ramirez had paper on her person which they used to play games throughout their trip. “With one lucky toss, it went right over the waterfall,” said Whitson. 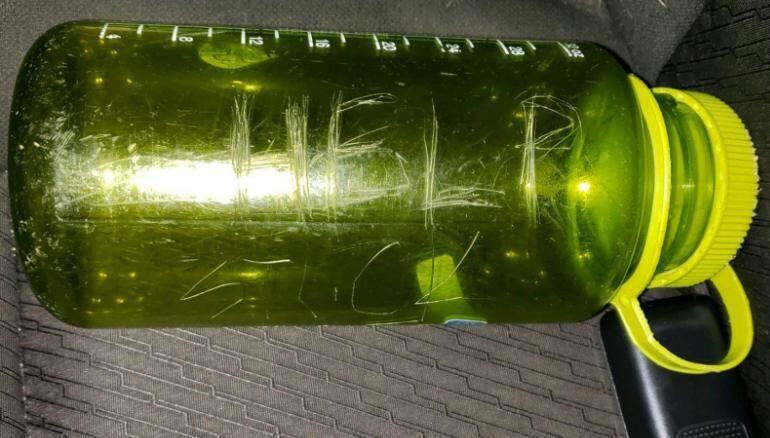 Curtis WhitsonThe message was found by two men who notified the nearby campgrounds host, but left without giving their names. Whitson is eager to find and thank them.

“We are stuck here at the waterfall. Get help please,” the message read, according to CBS News.

The family wasn’t satisfied with the one-pronged approach, however. They hiked back up the river to a place they stopped by earlier for lunch to implement a backup plan. It took them two minutes to float down earlier, but around 30 minutes to get back upstream.

They took their blue tarp and spread it out in a clearing, and used white rocks to spell out “SOS” atop its contrasting hue. The sun was setting at this point, so they used one of their headlamps to keep the letters illuminated. According to first responders, that might’ve been their saving grace.

“They were really out of options if they hadn’t gotten the message out that way, it might’ve been a while,” said Todd Brethour of the California Highway Patrol Air Operations Unit.

The trio was awakened by the California Highway Patrol’s helicopter whirring overheard, with a loudspeaker confirming: “This is Search and Rescue. You have been found.” 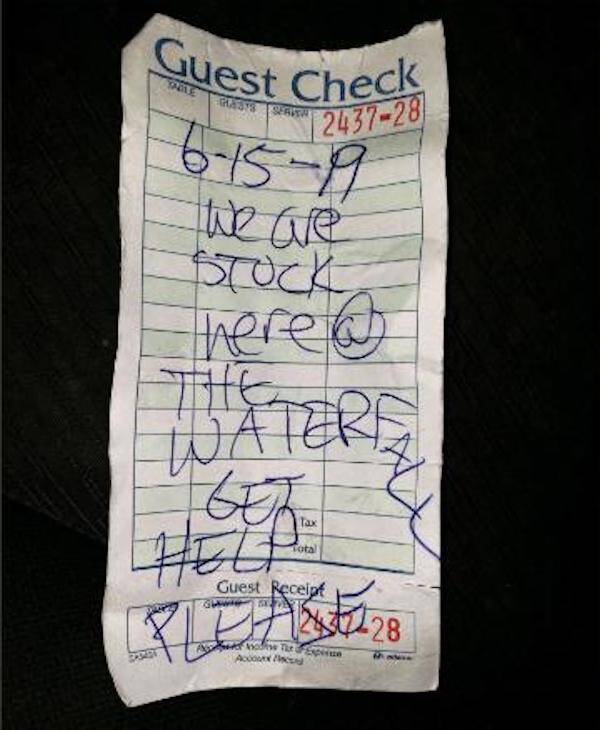 Curtis WhitsonFortunately, Curtis Whitson’s girlfriend Krystal Ramirez brought scratch paper and a pen along. Otherwise, they may have never been rescued at all.

“It was one of the best feelings,” Whitson confessed, “nothing was sweeter than those words uttered by CHP.”

Ultimately, it was the message in a bottle that saved their lives. Whitson was told two men found it hours earlier and notified the host at the nearby campgrounds. The mysterious lifesavers left without giving their names, giving Whitson an entirely new mission to carry out. He wants to find and thank them for saving his family’s life.

“I’ve never heard any kind of a message for assistance coming down a river in a water bottle,” said Brethour. As for Whitson’s girlfriend, Ramirez said she bought her boyfriend a brand new water bottle as a souvenir — with a love note inside.

After reading the harrowing story of the family rescued from a 40-foot waterfall thanks to a message in a bottle, see the moment hikers discovered George Mallory’s body on Mount Everest. Then, read about the world’s oldest known message in a bottle ever found.