When the young couple phoned in their discovery, police, fire, and local EOD teams swarmed the beach fearing the cannonballs were still live. 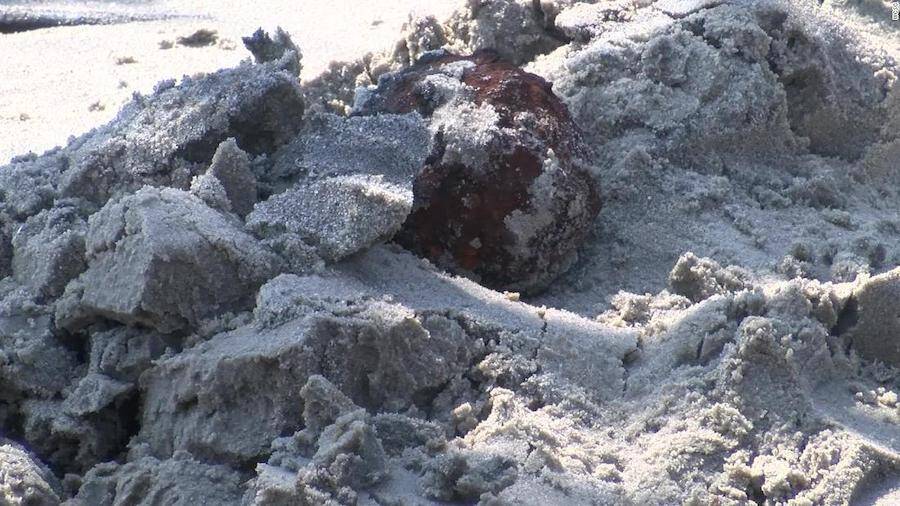 WCSCOne of the cannonballs weighed eight pounds and the other three.

Strong hurricanes often leave destruction in their wake and sometimes, they uncover a bit of history too.

This was the case for a young couple visiting South Carolina’s Folly beach when they came across two Civil War-era cannonballs exposed on the sand. According to local news outlet WCSC, the historic relics were likely unburied by the strong winds of Hurricane Dorian.

Though the couple had hoped to find some artifacts washed up on the beach after the hurricane, they never thought they would find something like this.

“I wanted to get a metal detector,” Aaron Lattin said of his discovery. “We actually just got lucky with no equipment, just spending a day at the beach.”

At first, Lattin said, the couple thought the cannonballs were perhaps strange rocks. But after closer inspection, realized they were likely old explosives and called the find into the Folly Beach Department of Public Safety.

Police, fire, and local EOD teams arrived at the scene and sealed off the area around the cannonballs just in case the weapons were still live and dangerous.

“It took the better part of the day,” to determine whether the explosives were dangerous, Folly Beach Department of Public Safety Chief Andrew Gilreath told CNN.

After the danger was cleared, explosives experts took away the cannonballs, likely so that they could be destroyed, the chief said.

Incredibly, this isn’t the first time cannonballs have washed up around this portion of Folly Beach. In 2016, locals found 16 Civil War cannonballs in the same location after the impact of Hurricane Matthew.

“It’s a historical treasure,” Lattin’s girlfriend, Alba, told WCSC. “It’s the history of here in Charleston. Of course, after we found it we wanted to tell the world.”

She’s right about the history of Charleston. Folly Beach Island has a history closely linked to the Civil War. It was occupied by Union forces in 1863 and during that occupation, the Union built infrastructure on the island to support their war efforts, including an artillery battery and supply depot.

Screengrab from WCSCThe pair discovered the cannonballs amid brush on the beach.

In fact, the first shots of the Civil War were fired not too far from the island in Fort Sumter, so perhaps it’s no wonder that there have been numerous cannonballs found on the island’s shores.

“This is something that’s happened every couple of years since I’ve been here, at least,” Chief Gilreath confirmed. “We’ll have some erosion on the beach, and something will get uncovered.”

The beach has become so well-known as a hotspot for historical relics that it has drawn crowds of history enthusiasts hoping to find hidden treasures underneath its sands for decades.

“I’ve been doing this for 20 years,” treasure hunter Jerry Tindal said half-exasperated. “and found some junk, maybe some mini balls, a few pieces of metal. A nice young couple five minutes before us walks across a cannonball…Wish I could find one too.”

Let’s just hope he won’t have to wait for another devastating hurricane to do so.

Next up, read about the mysterious giant sea creature that washed up on the shores of Indonesia — and turned the sea red. Then, take a look at 39 haunting photos from the Civil War.