These Holocaust victims pictures, taken as new prisoners entered the camps, put faces on the statistics the world remembers today. 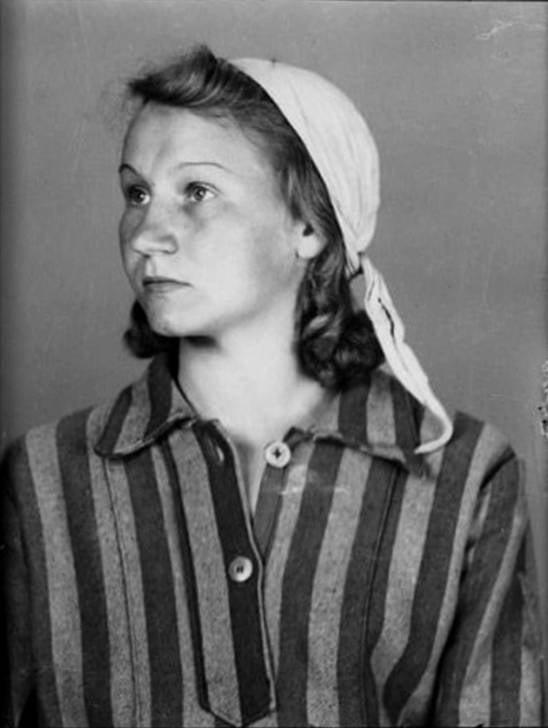 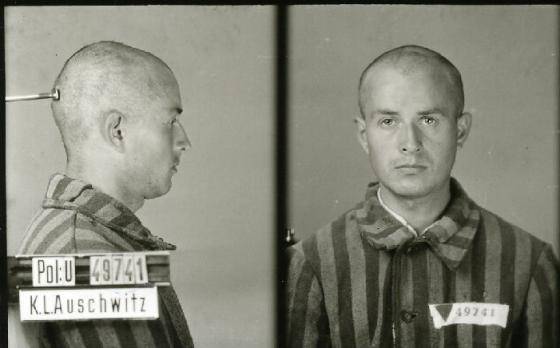 Auschwitz photographer Wilhelm Brasse was deeply affected by seeing Czeslawa Kwoka beaten. "I felt as if I was being hit myself," Brasse later said, "but I couldn't interfere."Wikimedia Commons
2 of 34
Katarzyna Kwoka. Auschwitz. 1942.

Posymysz survived the camps and was liberated by the U.S. Army on May 2, 1945. Afterward, she wrote an autobiography called Passenger from Cabin 45 describing what happened inside the camps.Wikimedia Commons
5 of 34
Jewish Prisoner 2731. Auschwitz. 1942.

Nothing about Prisoner 2731's life has been saved. All that remains is this photograph and the number the Nazis gave her.Faces of Auschwitz
6 of 34
Witold Pilecki. Auschwitz. 1940.

Pilecki was a Polish spy who deliberately got himself imprisoned at Auschwitz. He risked his life so that he could get firsthand information on the camps and try to organize a resistance movement among the prisoners.Faces of Auschwitz
7 of 34
August Pfeiffer. Auschwitz. 1941.

Pfeiffer is wearing the pink triangle marking him as a homosexual. He was killed inside the camps in 1941.Open Democracy
8 of 34
Salomon Honig. Auschwitz. 1942.Faces of Auschwitz
9 of 34
Karl DuMoulin. Dacahu. 1936.

DuMoulin was an early member of the Nazi Sturmabteilung. In 1934, however, he was arrested on charges of homosexuality.Wikimedia Commons
10 of 34
Prisoner U 58076. Auschwitz. Circa 1942.Auschwitz.org
11 of 34
Janina Nowak. Auschwitz. 1942.

Nowak was the first woman to escape from Auschwitz. The Nazis, furious, forced her fellow prisoners to shave their hair as punishment for letting her get away.Faces of Auschwitz
12 of 34
Norbert Głuszecki. Auschwitz. 1942.

Smoleńska was a member of the Polish resistance movement Gray Ranks. She was arrested for her role in the group and died from typhus inside Auschwitz.Wikimedia Commons
18 of 34
Julian Sawicki. Auschwitz. 1942.

Sawicki read the Act of Restoration of the Ukrainian State over the radio, greeting the Nazi Army as liberators freeing the Ukraine from Soviet control. Instead of being thanked, he was sent to the concentration camps, where he died.Wikimedia Commons
19 of 34
Vasyl Bandera. Auschwitz. 1942.

Bartoszewski‎ managed to get out on April 8, 1941. He told the world what he'd seen inside and, afterward, joined the Polish underground and the Warsaw Uprising.Wikimedia Commons
23 of 34
August Kowalczyk. Auschwitz. 1940.

Kowalczyk escaped Auschwitz on June 10, 1942, taking advantage of a commotion to escape into the forest. A Polish family found him and helped him hide from the SS.Faces of Auschwitz
24 of 34
Prisoner Z 63598. Auschwitz. Circa 1942.Auschwitz.org
25 of 34
Deliana Rademakers. Auschwitz. 1942.

Rademakers was a Jehovah's Witness, deported to Auschwitz and, later, Ravensbrück after the Nazis invaded the Netherlands.Faces of Auschwitz
26 of 34
Else Woieziek. Kemna. 1937.

Degen is wearing a pink triangle, marking him as a homosexual.Faces of Auschwitz
29 of 34
Heinrich Heine. Kemna. Circa 1936.

Heine was arrested for being a Jehovah's Witness.United States Holocaust Memorial Museum
30 of 34
Iwan Rebałka. Auschwitz. 1942.Faces of Auschwitz
31 of 34
Maria Kotarba. Auschwitz. 1943.

Kotarba was called the "Mommy of Auschwitz" because she delivered medicine and comforted the ill. Auschwitz.org
32 of 34
Lena Mańkowska. Auschwitz. Circa 1941–1942.

Mańkowska spent her years after Auschwitz trying to get Maria Kotarba, whom she befriended in Auschwitz, recognized as an "Angel of Auschwitz" for her resistance efforts. She finally succeeded in 2005.Auschwitz.org
33 of 34
Jan Matuszek. Auschwitz. 1940.Wikimedia Commons
34 of 34 A handful of Holocaust portraits are all we have to connect ourselves to millions of lost lives.

The sheer scope of the Holocaust is unimaginable. In a few short years, the Nazis killed some 6 million European Jews — and that number doesn't include the approximately 5 million men, women, and children from other walks of life who were targeted for extermination by Hitler's regime as well.

Every effort to truly tally the dead has failed. Each count gives a different result, but most place the number well beyond 10 million.

There were no funerals inside the walls of the concentration camps. The dead were stripped of their clothes and thrown into mass graves, or else incinerated in large crematoriums designed to burn thousands of bodies each day. 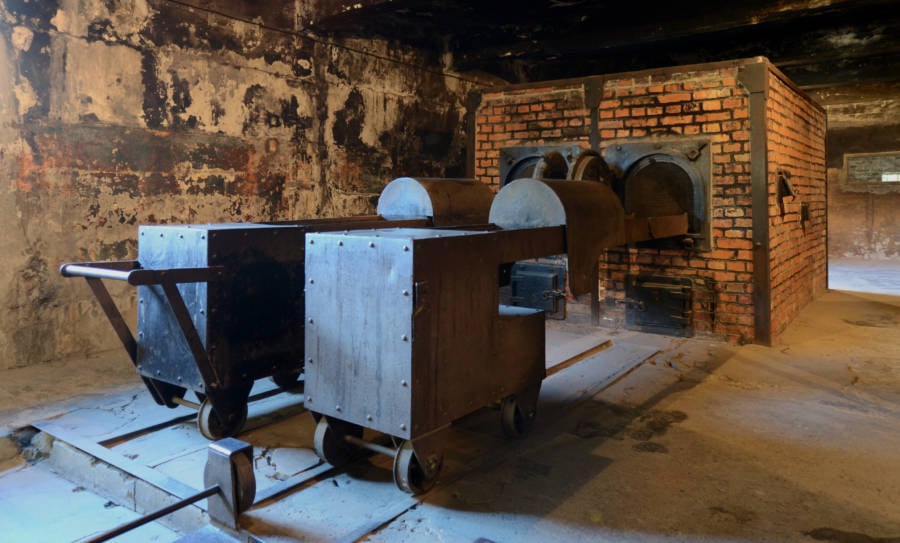 Many of the Nazis' victims lost more than their lives. Often, and their files were burned with their bodies. The concentration camps erased the record of their existence, leaving behind nothing but a statistic.

In some cases, the photo that the Nazis took for their records when a prisoner entered the camp is all we have to remember that person.

That’s what makes the Holocaust victims pictures above so powerful. For many, these are the last pictures taken before they died, the last reminder of living, breathing people, built out of flesh and blood — not merely a statistic.

Hundreds of thousands of concentration camp prisoners were photographed when they came in. They were given a number, marched in front of a camera, and forced to stand as they were processed into the world’s most efficient killing machine.

The Nazis were nothing if not meticulous. They kept detailed records of the people they imprisoned, assigning each one a number and documenting their place and date of birth, race, religion, and date of arrival.

Faces of AuschwitzWalter Degen. Auschwitz. 1941. Degen is wearing a pink triangle, marking him as a homosexual.

In these Holocaust victims pictures, the women’s heads are shaved. At first, it was a practice the concentration camps' overseers only pushed on the Jews, but in later years, the policy was extended to include all new inmates. The women were forced to sit there as every lock of hair on their heads was cut clean and fell onto the floor.

Then the guards would bark at the prisoners in German, a language many of them did not understand, and send them to get their pictures taken by using whatever force it took to make them move.

There would be three bursts of the camera’s bulb: one from each side, and the last with the prisoner looking straight into the photographer's face.

For many, these were some of the last moments of their lives. Few would survive the brutal conditions of the camps and the periodic purges. Many would be gone before a month had passed.

Wilhelm Brasse: The Photographer Of Auschwitz

Only a relative handful of these Holocaust victims pictures still exist today, and most of those that do were taken by a single man: Wilhelm Brasse, a photographer at Auschwitz.

In the final days of the war, when it became clear that liberating Allied forces were on the march, the concentration camp photographers were given direct orders to destroy these photographs. The Nazis were determined to erase all evidence of the atrocities they had committed. 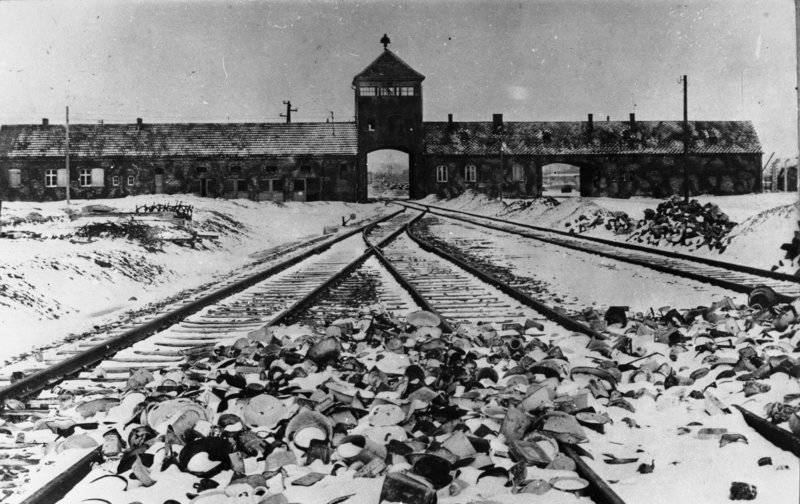 Stanislaw Mucha/Wikimedia CommonsAuschwitz in the aftermath of its liberation. Poland. 1945.

Brasse and a handful of other photographers, however, refused. They hid the negatives, smuggled them until the war had ended and, when the chance came, handed them over as proof of what had happened inside of those walls.

Brasse had no allegiance to Hitler or the Third Reich. He was half Austrian and half Polish, and when the war began, he refused to join the Nazi army. He tried to flee to France and, as punishment, was shipped off to Auschwitz on Aug. 31, 1940.

He was a prisoner, just like the others. Brasse, however, was also a trained photographer, and when Auschwitz commander Rudolf Höss realized this, he had him take the official portraits of every new arrival.

Stanisław Dąbrowiecki/Wikimedia CommonsAuschwitz commander Rudolf Höss walks to his execution on the very scaffold where he sentenced Auschwitz prisoners to die. 1947.

Through the lens of his camera, Brasse saw horrible things. After his photography caught the eye of Josef Mengele, for example, Brasse was ordered to photograph the Nazi Angel of Death’s twisted experiments on children.

“I don’t think about guilt,” Brasse would later tell journalists. “There was no way at all in that place that you could defend anybody.”

The Haunting Story Of Czesława Kwoka

No Holocaust portrait would impact Brasse quite as much as the one he took of a 14-year-old girl named Czesława Kwoka.

She was a young Polish girl who had been dragged out to Auschwitz as part of the Nazi retaliation for the Warsaw Uprising. Her mother was arrested too, and with them came 20,000 other innocent children. No more than 650 of them would survive.

Kwoka didn’t speak a word of German, and she had no understanding of what was happening to her. Brasse would later recall:

“So this woman Kapo [a prisoner overseer] took a stick and beat her about the face. This German woman was just taking out her anger on the girl. Such a beautiful young girl, so innocent. She cried but she could do nothing.

“To tell you the truth, I felt as if I was being hit myself, but I couldn’t interfere. It would have been fatal for me. You could never say anything.”

Kwoka would not survive the camp. The Nazi death books registered her demise on March 12, 1943.

But the image of her face, bloodied by the Kapo’s stick, would never leave Brasse's mind.

“When I started taking pictures again, I saw the dead,” Brasse said. “I would be standing, taking a photograph of a young girl for her portrait, but behind her, I would see them like ghosts standing there. I saw all those big eyes, terrified, staring at me. I could not go on.”

He went on long enough, however, to preserve Holocaust victims pictures like those above. Today, because of him, the faces of Czesława Kwoka and thousands of others who died inside the Nazi death machines still survive.

After viewing this collection of Holocaust victims pictures, see more heartbreaking Holocaust photos. Then, explore the Jewish ghettos under the Nazis' reign.