Scientists Uncover Ancient Human Relative That Lived Alongside Our Ancestors

Although the bizarre human cousin of Homo naledi was thought to be more than 2 million years old, new research proves otherwise. 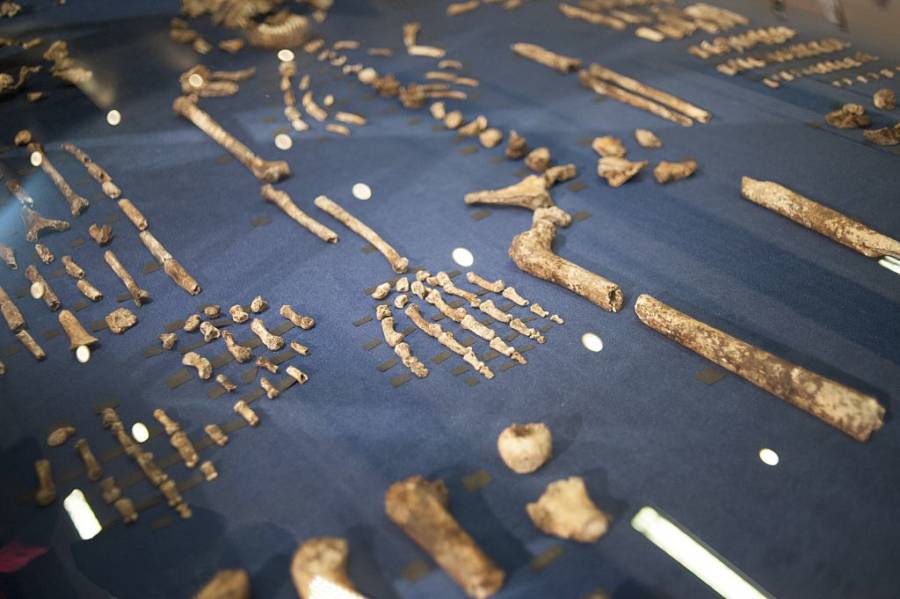 The world of science was pretty shaken up when Homo naledi, a bizarre species of human cousin, was first discovered in South Africa in 2013.

The 15 skeletons were uncovered deep in a cave and, though they looked startlingly similar to humans, their brains were the size of a gorilla’s (about the size of an orange). This apparent indicator of primitivity led scientists to hypothesize that the Homo naledi roamed the world 2.5 to 2.8 million years ago — long before our ancestors arrived on the scene.

But, new research on these fossils along with the recent discovery of a second cave of skeletons has revealed two surprising findings, reported this week in eLife:

First, the Homo naledi existed shockingly recently. And second, the practice of burying the dead is shockingly old.

The bones were discovered to be as little as 236,000 years old, meaning that Homo naledi lived recently enough to have coexisted with modern humans, who first came to be approximately 200,000 years ago.

“This is a humbling discovery for science,” Lee Berger, a paleoanthropologist at the University of the Witwatersrand in Johannesburg told The Washington Post. “It’s reminding us that the fossil record can hide things … we can never assume that what we have tells the whole story.”

The skeletons were originally discovered in the Rising Star cave system, a winding cavernous site in South Africa’s “Cradle of Humankind.”

The pathway to where the Homo naledi were buried was so narrow that it took a team made up entirely of exceptionally agile women to access them.

With their discovery, the Homo naledi was suddenly the newest and best-documented hominin species (besides, you know, us).

The more recent discovery of a second group of Homo naledi skeletons took place in a different part of the same cave.

More than 130 hominin bones from three different Homo naledi individuals were uncovered here, leading its discoverers to conclude that the species was intentionally leaving its dead together in these chambers — an advanced and symbolic behavior previously only attributed to Neanderthals and humans.

There’s some controversy over whether or not these two sites provide enough evidence to suggest such a bold thing, but everyone can agree on the importance of the findings overall.

“Our ancestors did not live in a single species world the way we do,” Alison Brooks, a paleoanthropologist, told the Post. “The real take-home message of this paper is that we were not alone until very recently.”

Slowly, researchers are putting dents in the idea that evolution was a straight line directly and simply leading to humankind.

“The past was a lot more complicated than we gave it credit for and our ancestors were a lot more resilient and lot more varied than we give them credit for,” Susan Anton, a paleoanthropologist at New York University who was not involved in the research, said.

“We’re not the pinnacle of everything that happened in the past. We just happen to be the thing that survived.”

Next, read up on the 4-billion-year-old rocks that contain fossils of the very first life on planet Earth. Then, learn about the recent discovery of our earliest ancestor: a tiny, anus-less mouth.