Freddie Mercury died in his home in London on November 24, 1991, at the age of 45 — just four years after he had been diagnosed with AIDS. 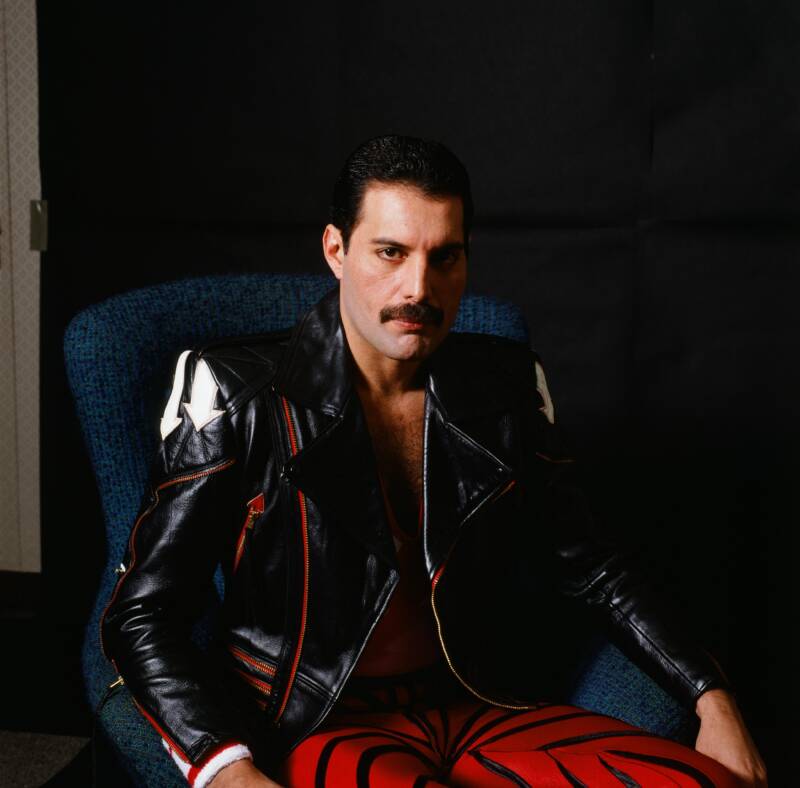 Late on Friday, November 22, 1991, Freddie Mercury released a statement to the press that he had been diagnosed with AIDS. Newspapers ran it Saturday morning. Then, on Sunday evening, Freddie Mercury died in his home in Kensington, London, at 45.

People had speculated about Mercury’s sexuality for several years as he had been romantically linked to both men and women. The Queen singer kept his private life private and gave little energy to feeding the rumors, focusing instead on his art.

But his statement in 1991 was the first peek behind the glittery curtain of his public persona. While the tabloids had printed recent photos of Mercury looking noticeably thinner, and rumors had swirled that he’d had AIDS since 1986, few people outside his immediate circle could have known that the end was so near. Nor could they have known just how agonizing his final days really were.

At the height of the HIV/AIDS crisis, Mercury’s death highlighted the critical conversations about healthcare and stigma in the gay community. And his willingness to live openly and authentically as himself solidified his legacy as a performer and queer icon. So, how did Freddie Mercury die? 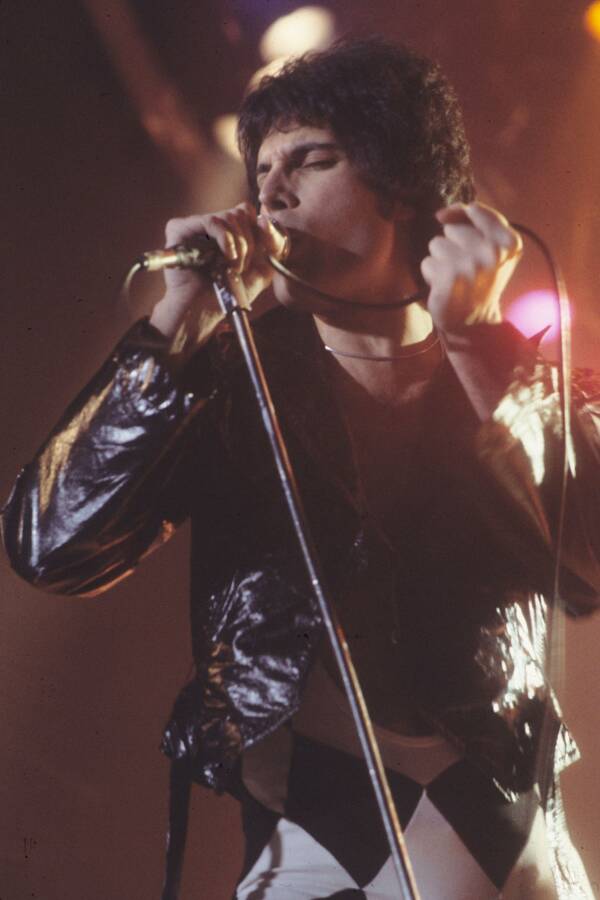 Freddie Mercury is the stage name of Farrokh Bulsara, who was born on Sept. 5, 1946, in Zanzibar. Mercury was born to Parsis parents and into the Zoroastrian faith, but he was enrolled in boarding schools in India very early, learning in more traditionally Western classrooms.

After completing his high school studies, Mercury returned to Zanzibar to be close to family. At 18, Mercury and his family were forced to flee during the Zanzibar Revolution to escape the violence of the insurrection, according to the BBC. They eventually settled in Middlesex, England.

There, Mercury was able to stretch his musical wings when he formed the band Queen in 1970 with Brian May and Roger Taylor. Mercury spent years practicing and studying music, and his expertise soon paid off with a marathon of international hits. Songs like “Bohemian Rhapsody,” “Killer Queen,” and “Crazy Little Thing Called Love” all received the theatrical, four-octave embellishments of Mercury’s voice.

These and a plethora of other hits put Queen into the international spotlight. But soon, his private life became something of tabloid fodder — and it would remain so until Freddie Mercury’s death.

How Tabloids Reported Rumors About His Sexuality 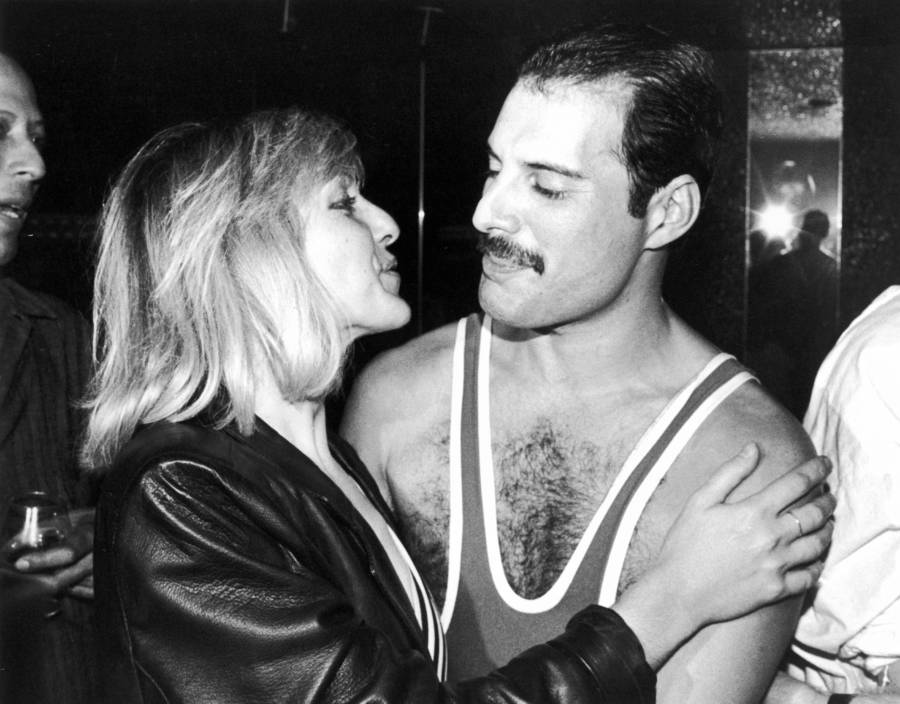 Dave Hogan/Getty ImagesFreddie Mercury with Mary Austin during his 38th birthday party in 1984.

In 1969, bandmate Brian May introduced Mercury to Mary Austin before they formed Queen. She was 19 at the time, and they lived together in her native London for many years, but Mercury went outside their relationship to explore his sexuality.

According to Express, Mercury met and began an affair with David Minns in 1975, and he told Austin about his sexuality. Though his and Austin’s relationship ended, the pair remained deeply connected throughout his life. And when Freddie Mercury died, she was one of the few people at his house.

In fact, Mercury later remarked, “All my lovers asked me why they couldn’t replace Mary, but it’s simply impossible. The only friend I’ve got is Mary, and I don’t want anybody else… To me, it was a marriage. We believe in each other, that’s enough for me,” according to Lesley-Ann Jones’ biography Mercury.

In the 1980s, Mercury’s sexuality continued to be publicly questioned. For some time, he was connected with Barbara Valentin, who he maintained was just a close friend. Around the same time, he became involved with Winnie Kirchberger, whom he dated for several years.

But it was Jim Hutton, who Mercury began dating in 1985, that he considered to be his husband, and they remained together until Freddie Mercury’s death. Some people felt like Mercury hid his sexuality, as he often kept his distance from Hutton in public, but others believed he was always openly gay.

By the mid-1980s, Mercury was frequently asked about his sexuality by the press, but he always found cheeky ways around answering. After Freddie Mercury’s death, Gay Times writer John Marshall wrote that “[Mercury] was a ‘scene-queen,’ not afraid to publicly express his gayness, but unwilling to analyse or justify his ‘lifestyle,'” according to VT.

“It was as if Freddie Mercury was saying to the world, ‘I am what I am. So what?’ And that in itself for some was a statement.”

How Did Freddie Mercury Die? 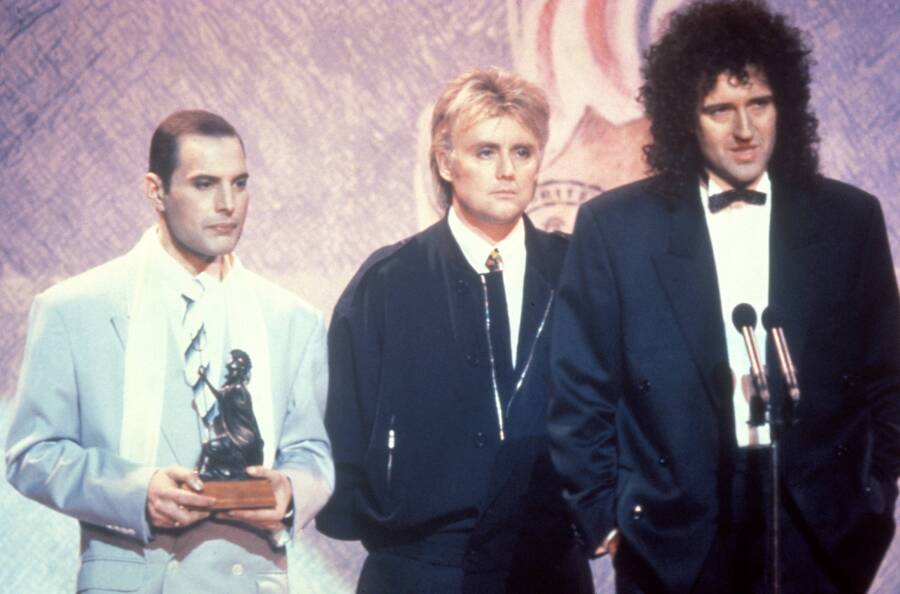 John Rodgers/RedfernsFreddie Mercury, Roger Taylor, and Brian May on stage at the Brit Awards, Feb. 18, 1990. The event would be Mercury’s last public appearance.

In 1982 while in New York, Mercury visited a doctor about a lesion on his tongue, which may have been an early sign of his HIV, according to The Advocate. In 1986, the British press got wind of a story that Mercury had a blood test done in Westminster. He was formally diagnosed in April 1987.

Mercury began making fewer public appearances. His last time on stage was with Queen to accept the 1990 Brit Award on Feb. 18. Many in the press commented on his appearance, which seemed notably thin. And at times, he appeared weak, especially for a man known for his energetic stage presence. After his final album with Queen in 1991, he returned to his home in Kensington and reunited with Mary Austin.

By November 1991, the month of Freddie Mercury’s death, he was largely confined to his bed as his condition worsened. According to The Mirror, just four days before he died, he asked to be carried downstairs so he could look at his prized art collection one last time. He weighed so little that it only took one person to carry him. 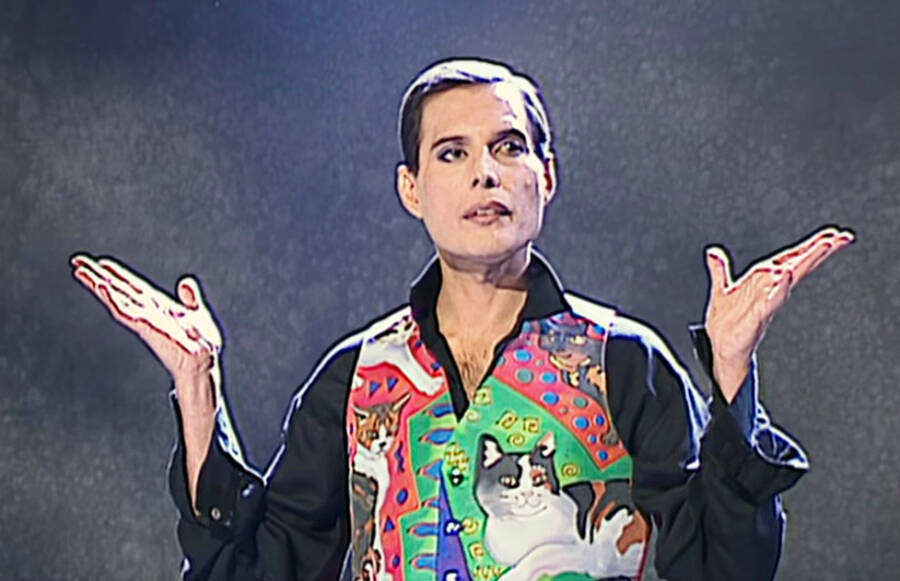 YouTubeFreddie Mercury performing in his last music video for the 1991 song “These Are The Days of Our Lives.”

That same day, according to Jim Hutton’s memoir and reported by The Mirror, Mercury left his bed on his own for the last time, walking to the window to shout “Cooee” down at Hutton, who was gardening.

By then, Mercury had lost most of his left foot and much of his eyesight. Knowing the end was soon, at 8 p.m. on Friday, Nov. 22, 1991, he released a public statement on his condition, which ran in the newspapers the following day.

That night, according to Hutton’s memoir, Hutton stayed with Mercury, sleeping next to him on his bed while he held his hand, occasionally squeezing it. And friends wanted to take his wedding ring, which Hutton had given him, in case his fingers swelled after he died and they couldn’t get it off. But Mercury insisted on wearing it until the end. He was even cremated with it.

Then, on Sunday morning, Hutton took Mercury to the bathroom. But as he was laying him back into bed, he heard a “deafening crack.” Hutton wrote, “It sounded like one of Freddie’s bones breaking, cracking like the branch of a tree. He screamed out in pain and went into a convulsion.” Eventually, the doctor settled him down with morphine.

Then, at 7:12 p.m., Freddie Mercury died with Jim Hutton by his side, according to Hutton’s memoir.

“He looked radiant. One minute he was a boy with a gaunt, sad little face and the next he was a picture of ecstasy,” Hutton wrote. “Freddie’s whole face went back to everything it had been before. He looked finally and totally at peace. Seeing him like that made me happy in my sadness. I felt an overwhelming sense of relief. I knew that he was no longer in pain.

The singer was ever a stickler for privacy. And Freddie Mercury’s death was no exception. He asked for a small funeral and for Austin to receive his ashes and part of his estate. She has never revealed where he asked his ashes to go.

After learning about how Freddie Mercury died, see these photos of Freddie Mercury that show his larger-than-life career. Then, take a look at 67 revealing pictures of celebrities before they were famous.