Human Echolocation: How The Blind Can “See,” And How We’re Holding Them Back 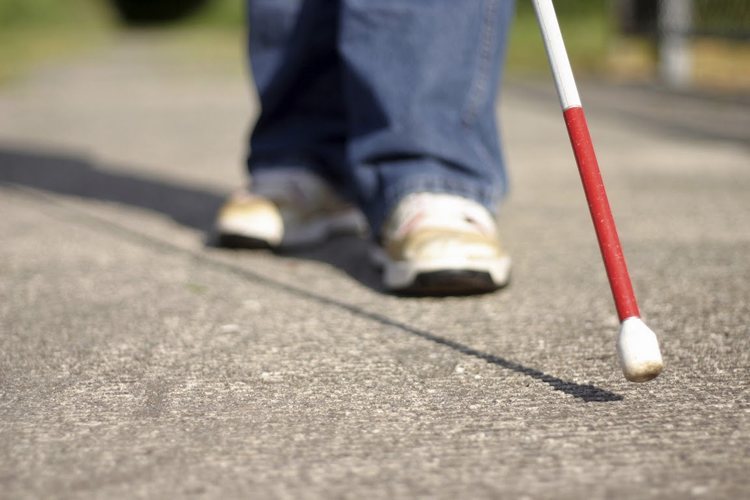 Think back to when you were very young and someone first explained blindness to you. If you were me, it was a menopausal primary school teacher telling you to stand up and close your eyes. “That is what it is to be blind,” she said, fanning herself. “Your eyes don’t work, so you can’t see anything. I want you to think about how much harder your life would be if you were blind.”

Wow! Indeed, we all thought and, deciding we would much rather see than not, popped our eyes back open.

This, or something like it, is how our society understands blindness. We cannot truly comprehend sightlessness, so we’re left with a vague idea followed by a sense of uneasy fear because we simply liken lack of sight to eternal darkness. Blindness deviates from what society deems to be functional, so what choice is left but to understand it as disabling? Thus, as is the case with so many other disabilities, we create specialized education programs, define safety guidelines, deliver food, and provide trained help (canine or otherwise) to ensure that the blind meet the demands of “normal” society.

However, “normal” society is neglecting their high school biology, because the images we “see” are not a result of our eyes, but our brain. The eye is the best tool we have to collect data about the outside world and provide it to the brain’s visual cortex, but it is just a tool. When our eyes are no longer functional, it is not a far reach to suggest that our brain will use other tools to find the data it needs to produce images of the outside world.

Over the past two decades, Daniel Kish has been working to combat popular ideas about blindness. A blind man himself, Kish serves as president of World Access for the Blind, a nonprofit that “facilitates the self-directed achievements of people with all forms of blindness and increases public awareness about the strengths and capabilities of blind people.” Kish argues that our assumptions about blindness are more dangerous than any other challenge the blind population faces. 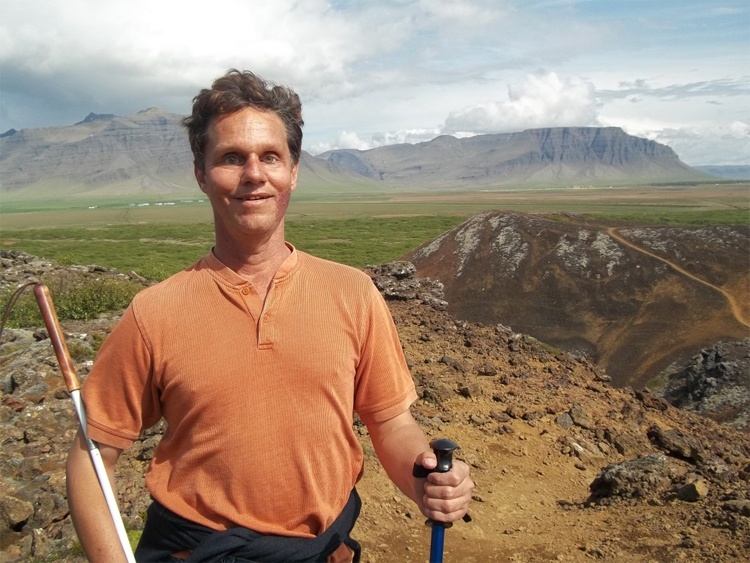 Born with retinoblastoma (cancer which affects cells in the retina), Kish’s eyes were removed at the age of 13 months. But, he was not raised like a blind child. His parents made the conscious decision to treat him no differently than other children. As a result, Kish adapted and naturally began to make clicking sounds with his tongue, using the vibrations to “see” his surrounding environment–effectively discovering human echolocation on his own. Just like bat sonar, his brain is activated with each click to form flashes of images, and using them, he can function perfectly fine in normal society. Kish can use human echolocation to wander neighborhoods, hike in the woods, ride a bike, and climb the occasional tree.

This ability to “see” using human echolocation is not unique to Kish. As you can imagine (or have experienced in a pitch black room), when you can no longer use your eyes, your other senses heighten–your body is not going to leave you defenseless. It is a mistake to understand the biology of the human brain as static. Neuroplasticity is a broad term which refers to the brain’s ability to make modifications and additions as a result of environmental and physiological changes. As such, when a person goes blind, the brain is biologically prepared and able to learn, adapt, and utilize alternative means, like human echolocation.

As far as the brain is concerned, human echolocation is a process of creating images. Lore Thaler, a neuroscientist at England’s Durham University, used an fMRI to conduct one of the first studies of its kind on human echolocation, monitoring the brain activity of two blind men (one of whom was Daniel Kish). Various objects were put before the subjects, first in an enclosed space and later outside. The subjects then used clicking noises to “see” the objects (those noises were also recorded). They could correctly describe the shape, size, location, and movement of the objects. Later, the subjects performed equally accurately while listening to the audio recordings of their clicks, similar to how a sighted person might recognize an object from a photograph. 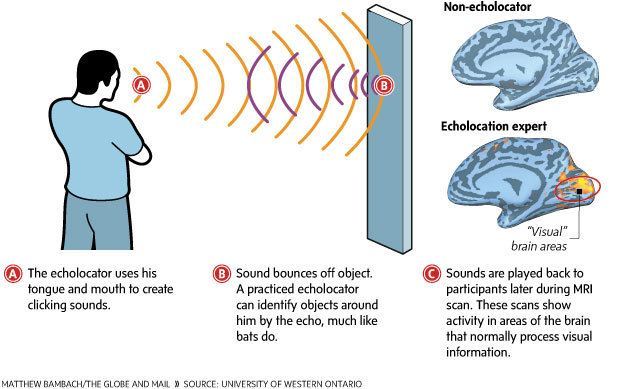 Then, the fMRI came into play. While they took images of the brain, Thaler and company played the audio recordings again and the subjects’ brains lit up with Day-Glo excitement. The resulting display demonstrated that human echolocation activates the brain in both the audio and visual cortices. In effect, the brain is creating images with the auditory input. Just like people with functioning eyes, the findings suggest that these men are technically seeing. 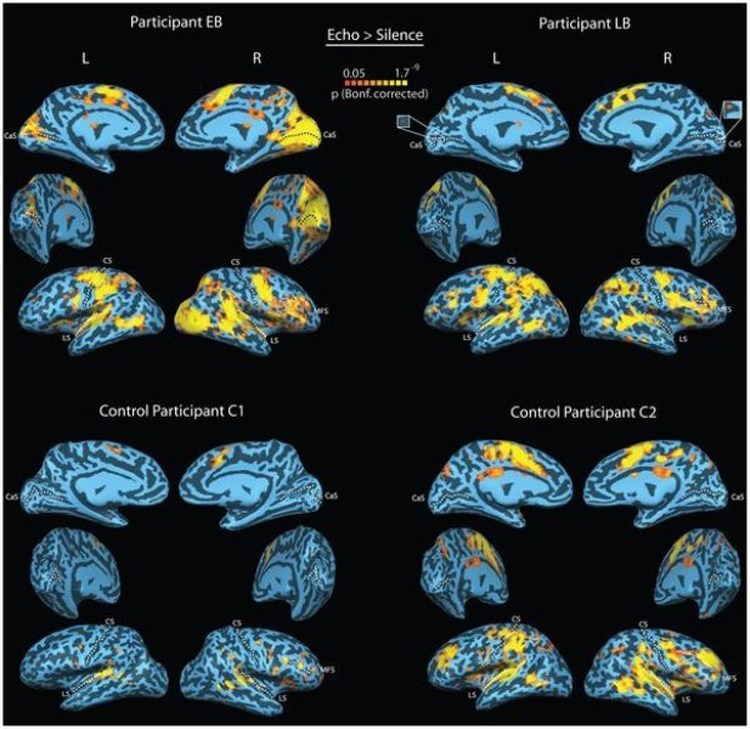 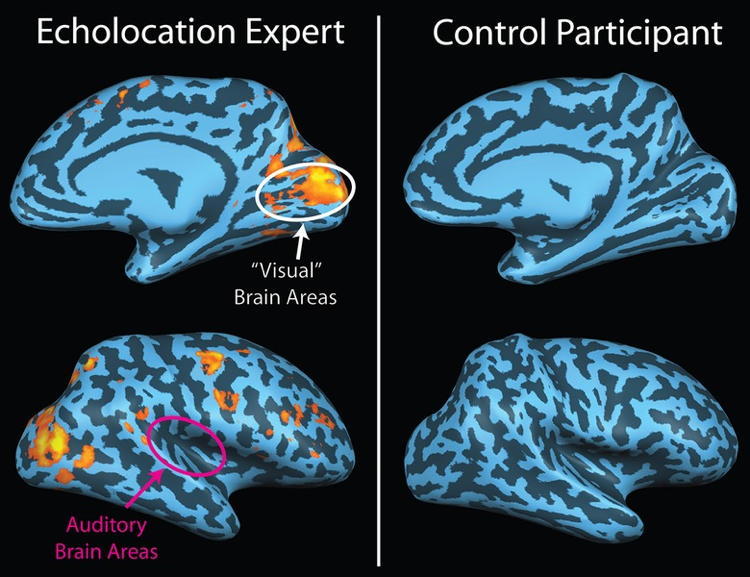 fMRI comparison of brain activity while listening to a playback of clicks in a blind person using human echolocation (left) vs. a control subject (right). Image Source: Medical Xpress

Given this news, why aren’t all blind people casting their canes and clicking out the door? It goes back to how our society cannot quite grasp the concept of blindness beyond its absence of light and the notion that it’s flawed in comparison to the “normal” perception of the world. Society constructs and projects ideas of what it means to be sightless onto the blind. From the moment someone goes blind, we spring into action to solve the “problem.” We do everything for them, effectively discouraging them from adapting on their own and creating blind people who are unable to function independently.

We only understand our role in the community through the way people interact with us. Identity and self-worth are direct products of being a socialized human being. The blind are not inherently dependent, but people treat them that way. Then, by the time blind people conform to those social cues and take our help, they confirm our preconceived notion that blindness is a disability, that blind people need our assistance, and the cycle begins anew.

It’s not that we’re malicious. In fact, it’s largely due to compassion that we provide assistance to the blind. However, as a result, we have left them debilitated. Who else are we crippling as a result of our best intentions?