A Day In Space: Explore Life On The ISS With Samantha Cristoforetti 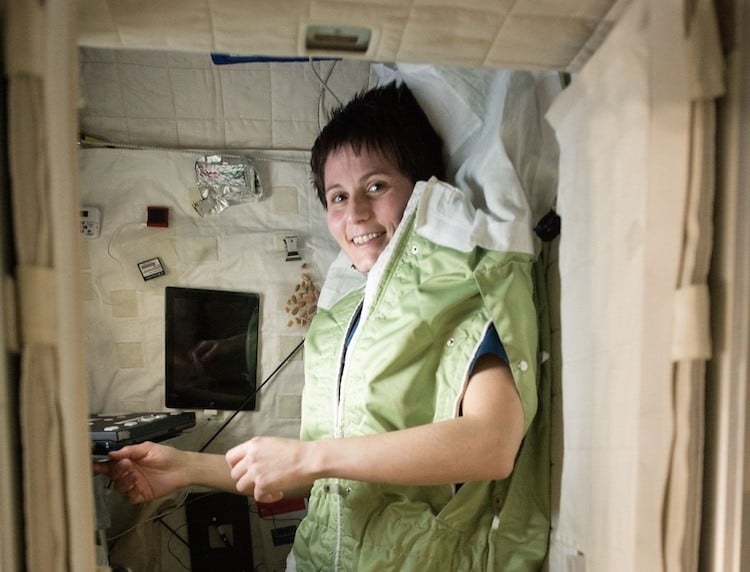 A self-professed night owl, Samantha Cristoforetti starts her day by groggily reaching for her laptop. Like many of us, she keeps it close at hand–about four inches away from her face, to be exact–and is at work before she even gets out of bed.

Unlike approximately all of us, Cristoforetti’s “bed” is a green sleeping bag on the International Space Station, and that laptop links Cristoforetti to Earth as she orbits 250 miles above the planet’s surface.

In case you didn’t already guess, Cristoforetti is an Italian astronaut with the European Space Agency.

After waking up in her phone booth-sized room, checking the day’s schedule on her computer, and floating out of her sleeping bag, Cristoforetti begins her day. For Cristoforetti, this means by hitting up the gym—every day.

In order to prevent bone density and muscle mass loss while in orbit, Cristoforetti and other astronauts spend at least an hour and a half in the gym each day, where they use specialized weightlift simulation equipment such as the Advanced Resistive Exercise Device, as lifting regular weights in a weightless environment just isn’t effective. In space, the cheat day simply does not exist.

After a long workout, many of us would head to the bathroom for a cool shower. Cristoforetti does more or less the same, but in her case, instead of running water, she must make do with a small, soapy washcloth and water squirted from a foil packet. Water sticks to her skin and floats through the air in drinkable bubbles due to surface tension–but Cristoforetti rarely has time to dawdle in the shower.

Since its 1998 inception, the International Space Station has cost over one hundred billion dollars, meaning that an astronaut’s productivity is very valuable. The European Space Agency makes Cristoforetti’s schedule and task list from the ground each day, so once she’s suitably clean, it’s time to get to work.

As Flight Engineer, Cristoforetti played a key role in docking the Dragon, a special cargo ship loaded with supplies and material for new experiments—such as an espresso machine. After it docked, Cristoforetti brewed herself a strong cup of space coffee (served in a microgravity coffee cup), which she sipped while dressed in a Star Trek uniform. Don’t worry: the Italian Space Agency assures us that the coffee-brewing adventure was “a very serious study into fluid physics” in a near-weightless environment. 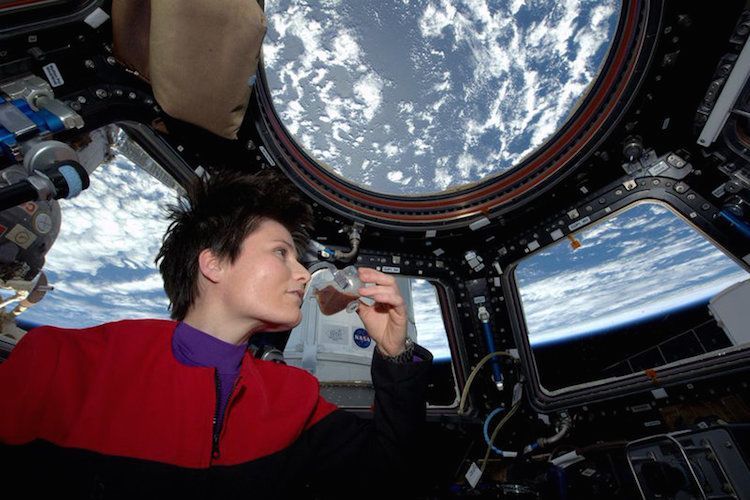 When she’s not maintaining her muscle mass at the gym, communicating with on-ground ESA employees, or brewing the world’s first cup of space espresso, Cristoforetti has to take a few minutes of the day to, well, replenish the station’s water supply. When astronauts use the restroom, the product gets converted back into water for reuse. The same thing happens here on Earth, just on a longer time scale.

“In the end,” Cristoforetti points out in one of her logbook entries, “there’s two things that you really want to be very familiar with when you’re about to launch to space: your spaceship and everything that has to do with using the toilet!” See how the system works in this video:

Of course, what goes out must have gone in at one point. Although astronaut food used to be notoriously bad – think mushy tube food that you wouldn’t even want to feed to a baby – flight fare is much better these days.

Cristoforetti does have some premade pouches of food, but other pouches feature yummy ingredients like tomatoes, mushrooms, and chicken that she can assemble into a meal. As she points out, though, assembling a full meal can be “quite a challenge in weightlessness.”

As she winds down for the day, Cristoforetti may take a few minutes to update her online logbook or enjoy a view of Earth from the Cupola, the window-filled observation room in the International Space Station. From there, astronauts can take pictures of Earth as it passes below, like this one that Cristoforetti captured of the Northern Lights on Christmas Eve: 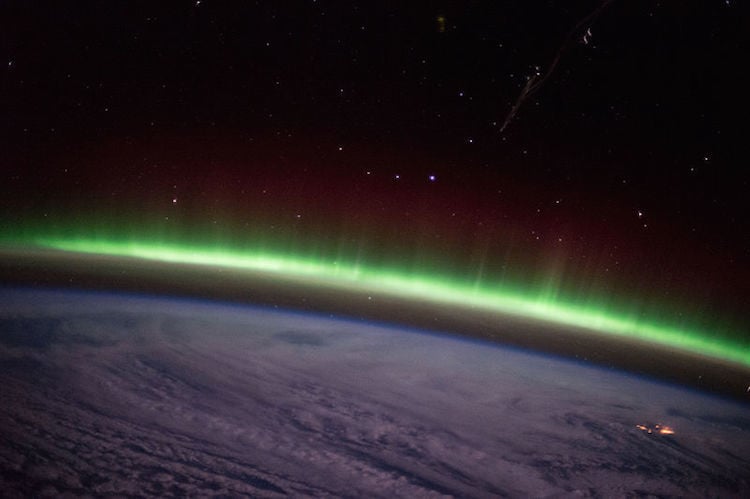 After 199 days on the Futura mission, Cristoforetti earned the current record for longest uninterrupted spaceflight by a woman. She arrived safely back to Earth in June, with her sense of humor intact, it seems. But she might be back soon: Cristoforetti has already noted that she misses space and would definitely go back if given the opportunity. Still, that fresh fruit has got to taste pretty good. 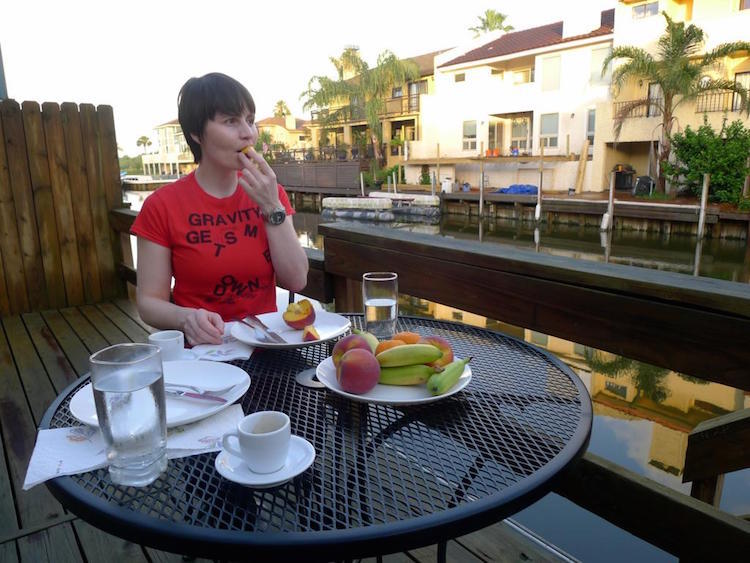