After Genocide, Only Human Wreckage Remains 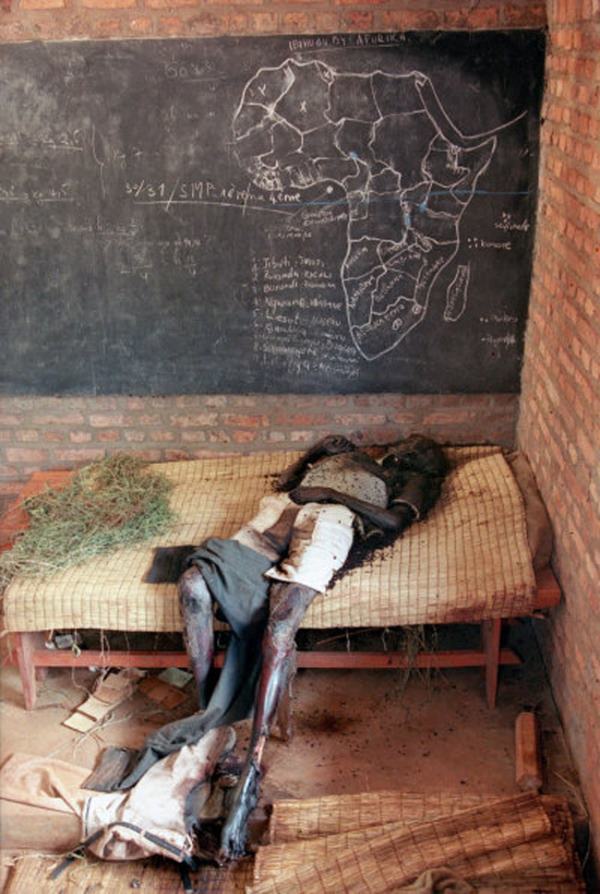 The body of a man, who survivors say was a primary school teacher, lies beneath a blackboard drawing of Africa at a Karubamba school, May 13, 1994. Image Source: Jean-Marc Bouju/Associated Press

“Nobody lives here any more.

Not the expectant mothers huddled outside the maternity clinic, not the families squeezed into the church, not the man who lies rotting in a schoolroom beneath a chalkboard map of Africa.

Everybody here is dead. Karubamba is a vision from hell, a flesh-and-bone junkyard of human wreckage, an obscene slaughterhouse that has fallen silent save for the roaring buzz of flies the size of honeybees.

With silent shrieks of agony locked on decaying faces, hundreds of bodies line the streets and fill the tidy brick buildings of this village, most of them in the sprawling Roman Catholic complex of classrooms and clinics at Karubamba’s stilled heart.

Karubamba is just one breathtakingly awful example of the mayhem that has made beautiful little Rwanda the world’s most ghastly killing ground.

Karubamba, 30 miles northeast of Kigali, the capital, died April 11, six days after Rwandan President Juvenal Habyarimana, a member of the Hutu tribe, was killed in a plane crash whose cause is still undetermined.

The paranoia and suspicion surrounding the crash blew the lid off decades of complex ethnic, social and political hatreds. It ignited a murderous spree by extremists from the majority Hutus against rival Tutsis and those Hutus who had opposed the government.

This awesome wave of remorseless mayhem has claimed 100,000 to 200,000 lives, say U.N. and other relief groups. Many were cut down while cowering in places traditionally thought safe havens: churches, schools, relief agencies.

One stroll past the bleached skulls, ripped limbs and sunbaked sinews on the blood-streaked streets of Karubamba gives weight to those estimates.

Almost every peek through a broken window or splintered door reveals incomprehensible horror. A schoolboy killed amid tumbling desks and benches. A couple splattered against a wall beneath a portrait of a serene, haloed Jesus Christ.

Peer into the woods every few hundred feet along the red-clay road to Karubamba and see piles of bodies heaped in decaying clumps.

News from Rwanda has been dominated by accounts of the carnage in Kigali or of millions of refugees living in mud and filth in vast encampments just outside the border. But what happened in Karubamba has happened – and is still happening – in villages across this fertile green nation of velvety, terraced hills.

Survivors from Karubamba say when early word came of the Hutu rampage, people from surrounding towns fled to the seemingly safe haven of the Rukara Parish complex here.

On the night of April 11, the killers swarmed among the neat rows of buildings and began systematically executing the predominantly Tutsi population with machetes, spears, clubs and guns.

“They said, ‘You are Tutsi, therefore we have to kill you,'” said Agnes Kantengwa, 34, who was among dozens holed up inside the yellow-brick church.

“We thought we were safe in church. We thought it was a holy place.”

Her husband and four children were butchered amid the overturned pews. Bodies stretched to the ornately carved hardwood altar beneath a large crucifix.

Somewhere amid the stinking human rubble is the Rev. Faustin Kagimbura,” who tried to protect us,” Kantengwa said.

Down the road, outside the maternity clinic next to the hospital, about 25 bodies lie beneath a cluster of shade trees; most appear to be women, but it is difficult now to be sure.

“They were women waiting to have babies,” Kantengwa said. “The killers made them go outside and kneel down, then cut them in the head with machetes and spears. They said, ‘You are Tutsi.'”

Mrs. Kantengwa, her 6-year-old son and 6-month-old daughter survived with a mosaic of machete wounds. They share one hospital bed in nearby Gahini, a larger town that breathes bustling life as easily as Karubamba exudes the suffocating stench of month-old death.

At the primary school midway between the maternity clinic and the church, a man lies prone beneath a meticulously drawn blackboard sketch of Africa, the capitals of each nation listed alongside.

The girl also was in the church when the slaughter began. By the time it was over, she was an orphan.

“All my family was killed,” she said. She fled outside during the slaughter and watched from the bushes.

“They just killed and killed,” she said.

The Tutsi-dominated Rwandan Patriotic Front that has been battling the government since 1991 has made huge gains in the countryside since the rampage began.

Their secured areas are relatively stable and well-policed, though scores of villages remain empty and thousands of people line the roads looking for safe places to stop. More than 1.3 million people in this nation of 8 million are displaced.

The rebels took Gahini and set up a base just days after the massacre at Karubamba. It is one of the staging areas for what is believed to be an imminent rebel assault on Kigali, where guerrillas are battling government troops backed by Hutu militias.

Capt. Diogene Mugenge, the rebel commander in Gahini, said an estimated 1,500 to 2,000 people died in the carnage at Karubamba. The only sign of human life in the area is a lone sentry posted roughly where the fresh air begins.

When asked about the massacre, and the fact that mutilated, battered bodies remain frozen in the moment of agonizing death just a few miles from his base, Mugenge shrugs.