Deep Sea Squid Light Up Their Whole Bodies To Communicate 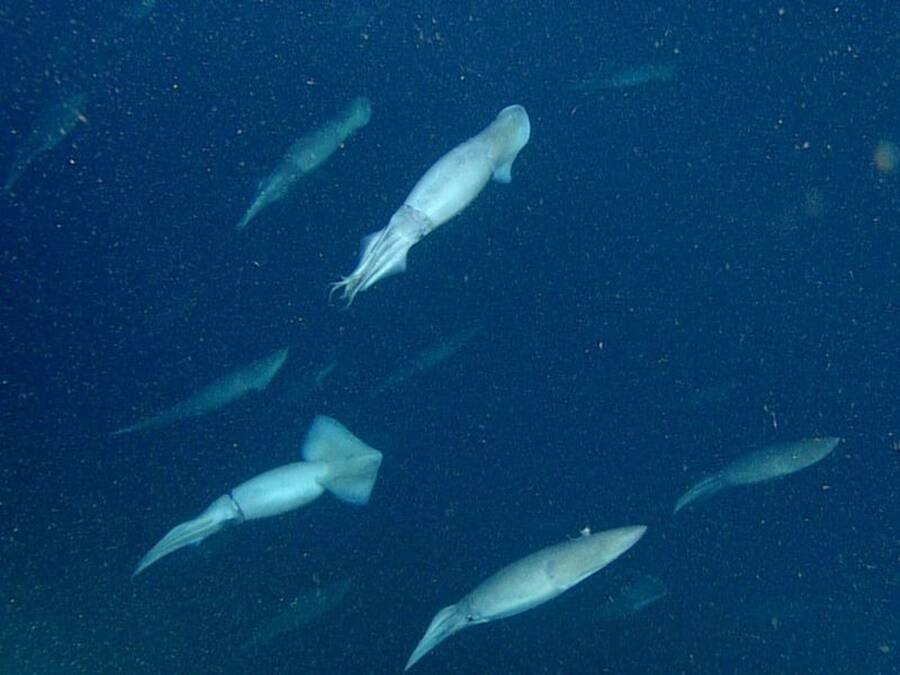 MBARIHumboldt squids are social animals and communicate with each other through special light pattern visuals under the sea.

While they may not talk like we do, animals have their own ways of communicating with their own. Scientists know that cephalopods like octopus and squid produce colorful light displays using pigment cells called chromatophores to communicate.

But what remained a mystery was how these colorful patterns would be visible between individual animals, like the Humboldt squid (Dosidicus giga), in the darkness of the deep sea.

According to Smithsonian Magazine, the answer lies in the Humboldt squid’s unique use of bioluminescent light organs known as photophores which allows them to glow from within, backlighting the changing, dark patterns on their skin, much like the screen of an e-reader.

Details of a new study on the Humboldt squid’s ingenious communication technique were published in the Proceedings of the National Academy of Sciences of the United States of America (PNAS) in April 2020.

Scientists continue to learn how to decode the unique lighting language of Humboldt squids.

“Instead of projecting light outwards, what these photophores do is radiate light within the body tissue. They make the whole animal glow.”

Humboldt squid — also known as “red devils” — are social creatures. They live in groups of hundreds in deep-sea waters. Yet, they can effectively communicate visually among individuals of a group even at depths of 600 feet or more. But the light displays their chromatophores produce are subtle.

Humboldt squids can reach up to six-feet-long which would make group hunts particularly chaotic if not for their unique style of bioluminescent communications. During a hunt, these Humboldt squids perform what is known as “flickering” across their bodies.

These squids are able to light up using light-producing organs in their muscles which backlight the changing pigment patterns in their skin. Researchers think the pigment is the message, and the squids use bioluminescence to make their communications visible.

Researchers observed that the large cephalopods were able to coordinate their movements during a chase, never bumping into one another or going after the same prey. This suggests that their flickering behavior was a way for them to signal each other and coordinate during a hunt.

“It’s like turn signaling in traffic,” Burford explained. “Driving is dangerous, being a Humboldt squid in a group is dangerous and you’ve got to signal to tell people what you’re going to do and that they shouldn’t mess with you while you’re doing it.” 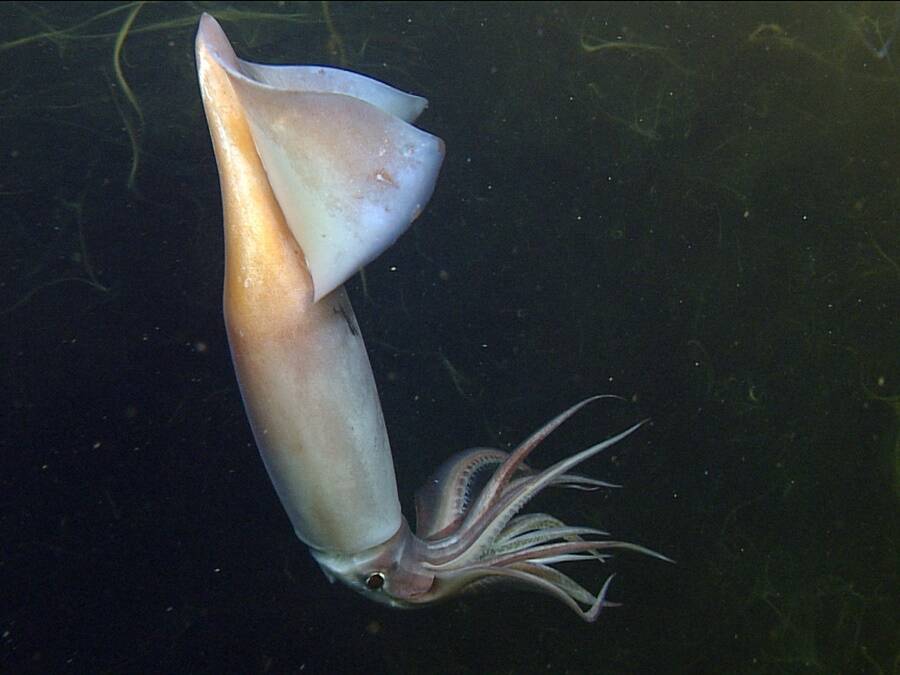 MBARIHumboldt squid are large and aggressive hunters which makes it crucial to have an effective way to communicate.

Even more remarkable is the fact that the squids also appear to reorder the patterns of their visual displays as they communicate, as if they are generating different sentences by rearranging words.

“That’s really exciting because then you can say a whole lot more based on their arrangement,” Burford said. “So, they could for instance say: hey, that fish over there is mine, and I’m the dominant squid.”

Flickering has also been observed in shallow-water studies of the Humboldt squids when they are spawning or laying eggs, which tells researchers that this species possibly uses flickering for different purposes.

There are at least 28 different pigmentation patterns in the Humboldt squid’s visual cues that have been identified so far. Next, Burford and his teammates hope to decipher the squid’s visual code.

“We found that it’s possible that those 28 elements of their repertoire have specific meanings,” Burford says. “But it seems like they can combine them in different ways and those combinations could also have meanings. And that should sound familiar because it’s like letters in the alphabet.”

Once we learn the language of these marine animals, maybe we’ll someday be able to communicate with them in their own “words,” too.

Now that you’ve learned about the unique communication used by Humboldt squid to “talk” to their own, learn about the rare giant squid and glow-in-the-dark sharks found near the sunken continent of Zealandia. Then, check out the gelatinous orb discovered by divers near a WWII shipwreck with thousands of baby squid inside.