"It's only the second [giant squid] I've ever seen. I've been on about 40 trips on Tangaroa, and most surveys are about a month, and I've only ever seen two. That's pretty rare." 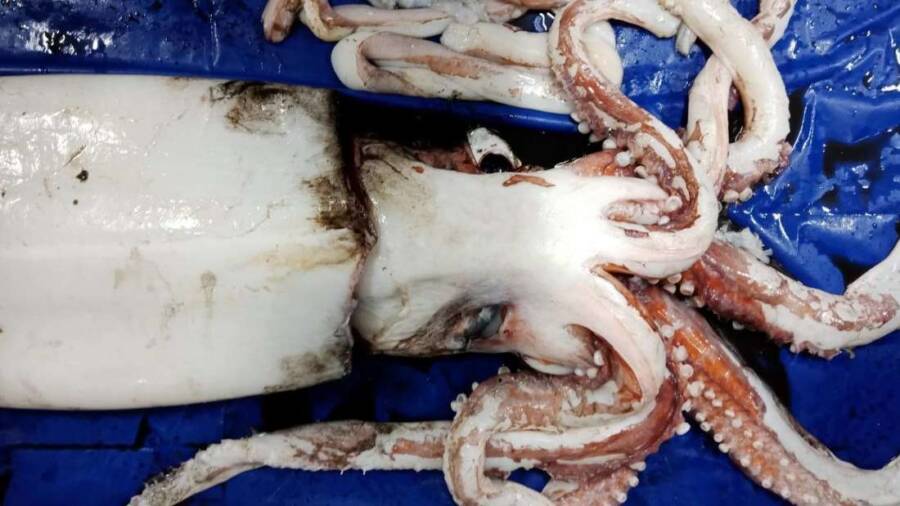 It was during a National Institute of Water and Atmospheric Research (NIWA) expedition that researchers aboard the Tangaroa encountered the creature. The team was surveying the commercially popular hoki fish — but spotted something far bigger lurking in the depths.

While pulling up their trawler nets in hopes of seeing hoki and potentially catching some highly elusive glow-in-the-dark sharks, the team was shocked at the enormous tentacles in their catch. According to IFL Science, it took six people to lift the giant squid (Architeuthis dux) out of the net — as it weighed 240 pounds.

The 13-foot-long animal was found in the Chatham Rise area east of New Zealand. Legend has it that this is where the lost continent of Zealandia lies buried. It was only in 2017 that scientists claimed to have found definitive evidence of the land mass purportedly as big as India.

At about 7:30 a.m. on Jan. 21, 2020, however, NIWA fisheries scientist Darren Stevens spotted something tangible. Though the tentacled behemoth was of colossal proportions, Stevens said it was “on the smallish side” compared to what else is out there.

“It’s only the second one I’ve ever seen,” said Stevens. “I’ve been on about 40 trips on Tangaroa, and most surveys are about a month, and I’ve only ever seen two. That’s pretty rare.” 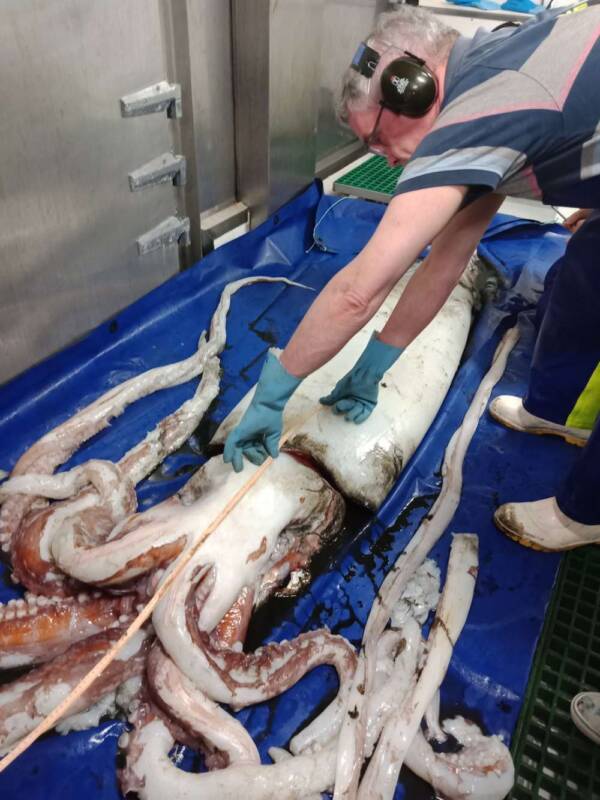 Brit Finucci/NIWADarren Stevens said this squid was “on the smallish side” of other captured squids.

“New Zealand is kind of the giant squid capital of the world — anywhere else a giant squid is caught in a net would be a massive deal,” said Stevens. “But there’s been a few caught off New Zealand.”

The two long tentacles of a giant squid have sharp suckers and are often twice as long as the squid itself. Architeuthis dux also have the largest eyes in the entire animal kingdom at 10 inches in diameter. In addition to its eight arms, the giant squid has a sharp beak it uses to kill fish.

New Zealand already has other giant squid specimens to study from, which is why the team only biopsied scientifically valuable parts of the animal. The small bone structure in its head will be used to age the squid, though that process still has quite a ways to go.

“Currently there’s no good way to age a giant squid,” Stevens told Newstalk ZB. “It’s thought they live for more than one year, that’s for sure. Maybe they live for three or four, but no one really knows.” 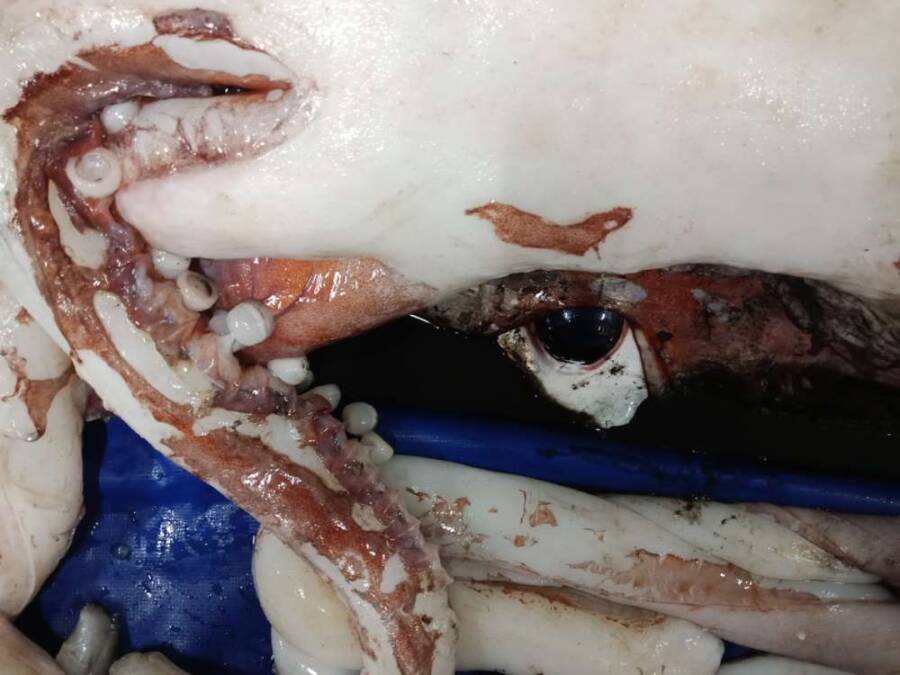 Brit Finucci/NIWAThe eyes of giant squids are the largest in the animal kingdom at 10 inches in diameter.

“We took the stomach because virtually nothing is known about a giant squid’s diet because every time people seem to catch one, there’s very rarely anything in their stomachs,” Stevens explained.

“Getting two giant squid eyes is apparently enough for a scientific paper. They’re really rare, and you need a fresh one. So it was a really unique set of circumstances to get two fresh eyes.”

As for the bioluminescent shark hunt, the Tangaroa had the world’s most prestigious expert on the species aboard.

Dr. Jérôme Mallefet of the Université Catholique de Louvain in Belgium was so eager to catch and photograph the animals that he set up a darkroom aboard the ship specifically for them. 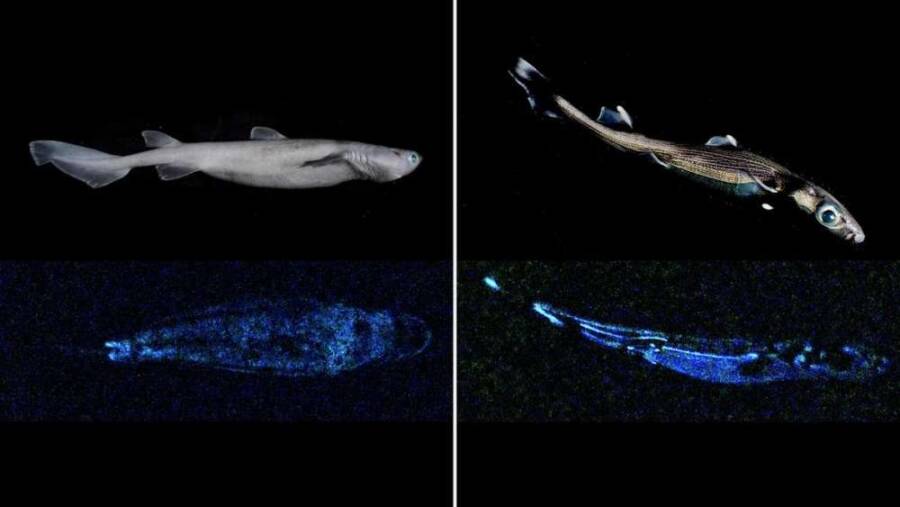 In the end, he managed to capture the very first evidence of bioluminescent sharks ever recorded in New Zealand waters. He explained that only 11 percent of known shark species can emit this type of light. They typically live in the dark depths of over 656 feet below the surface.

Dr. Mallefet’s fortuitous discovery came in the form of southern lantern sharks, lucifer dogfish, and seal sharks. All three of these species usually produce a blue light, with green being an outlier. According to Newsweek, everyone involved is rather satisfied with their Tangaroa trip.

“I was so happy,” said Dr. Mallefet. “I was dreaming to get pictures of bioluminescent sharks [on the voyage] and I got them.”

In terms of the forthcoming research on the captured giant squid, the dissected body parts have been sent to Auckland University of Technology squid researcher Ryan Howard.

Hopefully, we’ll soon know a lot more about these sea creatures that drift around the oceans — right beneath our ships.