Humpback Whales Are Forming Supergroups And Scientists Are Baffled

Typically not social creatures, these whales have recently been gathering in groups more than 20 times larger than usual. 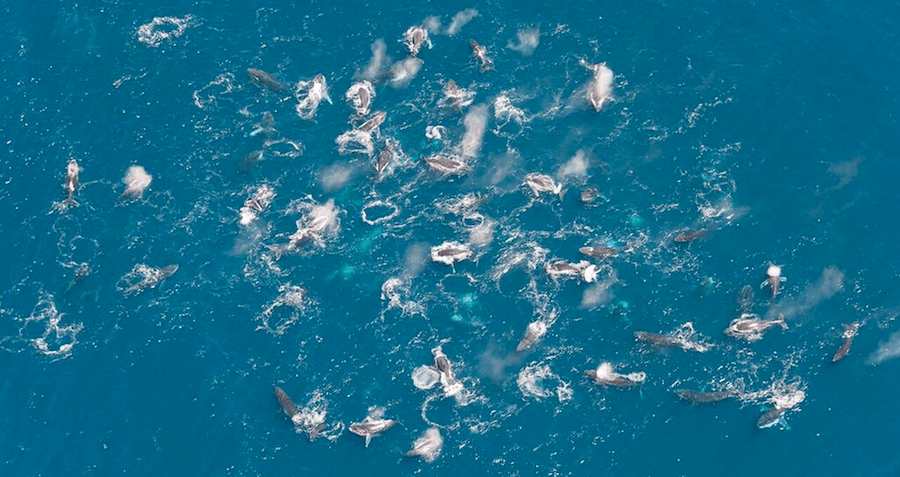 Humpback whales have begun forming congregating in massive groups, an unusual behavior that is puzzling scientists.

Scientists have discovered that these supergroups typically consist of 20 to 200 whales at a time. This is strange behavior for humpback whales, who typically spend their lives swimming around the oceans alone.

At most, humpback whales tend to congregate in groups of seven-ten whales at a time, and that’s only on a temporary basis during migration, mating, or feeding season. This lone wolf precedent is of course what makes the new supergroup behavior so odd.

Publishing their results in the scientific journal PLoS One, the scientists have so far found 22 different supergroups around the planet on three separate trips in 2011, 2014, and 2015, according to Science Alert.

“I’ve never seen anything like this,” lead researcher Ken Findlay, from the Cape Peninsula University of Technology in South Africa, told New Scientist.

“[W]e propose that the ‘super-group’ feeding phenomenon (as tightly spaced large groups of whales) is a relatively recent behavior exhibited by these whales,” the researchers wrote in the study. “[N]o such dense feeding aggregations have been reported elsewhere in low or mid-latitudes during Southern Hemisphere humpback whale migrations. Indeed, aggregations of whales of this size have seldom been reported in the literature, with ‘large’ groups often numbering in the range of 10 to 20 or less.”

The other odd thing is that the humpback whales are switching up their typical migration paths when forming these supergroups. Instead of feeding around Antarctica, which is where they typically go during the summer to stock up on krill and fat for the winter, the humpback whales are now thousands of miles away in South Africa.

Unfortunately, nobody seems to have an explanation for this bizarre change in humpback behavior. The best guess the researchers have concerns the terrible toll that whaling had on the humpback population in the past centuries.

Now that whaling, which reduced humpback numbers by roughly 90 percent, has been outlawed for decades, the increasing number of humpbacks worldwide could simply be bringing back what should be typical behavior for these creatures and perhaps was before humans interfered.

Next, see the beached whale’s stomach that was filled with a huge ball of deadly plastic bags, before checking out these killer whales taking turns eating a shark alive as captured by a recent drone video.