Over the course of 30 years, Alex the parrot and Irene Pepperberg showed that parrots are even smarter than most people think. 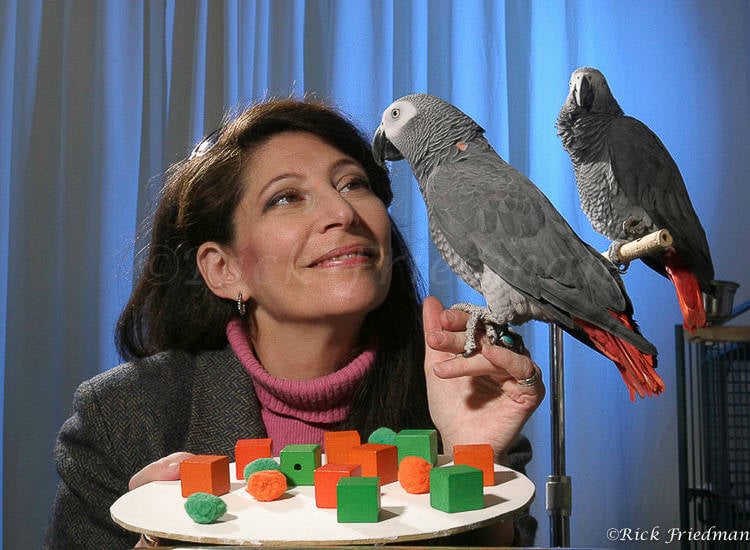 FlickrIrene Pepperberg with Alex the parrot.

In 1977, animal psychologist adopted Alex, a one year old African grey parrot. At the time, Pepperberg was a researcher at Purdue University who was studying animal cognition, particularly in the areas of language and communication. Up until her efforts, most animal behaviorists believed that birds were on the low end of the intelligence spectrum, with birds such as parrots lacking complex thought despite their acumen at mimicry.

Alex The Parrot: Not So Bird-Brained

But over the course of 30 years, Pepperberg worked with Alex to develop responsive communication and prove that parrots are much more intelligent creatures than had been previously been believed.

Although birds can develop a vocabulary of up to 2,000 words, it was thought that they can only mimic sounds that they hear, and only animals with a larger brain, such as apes or dolphins, are capable of the complex thought necessary to understand language.

Alex the parrot, however, proved to be different. Alex not only learned to mimic repetitive sounds, but he was able to communicate complex thoughts. He had a vocabulary of up to 150 words, was able to identify up to 50 different objects, recognize quantities, and could distinguish between seven different colors and five different shapes. Alex the parrot was also capable of understanding the concept of size and demonstrated that he understood basic spatial reasoning.

Alex demonstrates his knowledge on camera.

Irene Pepperberg used a type of training technique known as the Model/Rival Technique, to prove that Alex was indeed understanding and responding to the questions, rather than responding to the trainer’s behavior. In this technique, Alex watched as Pepperberg took on the role of the trainer, and her assistant took on the roles of the model/rival. The trainer would ask the model/rival a question regarding an object, who would then answer.

Over the course of the training, Alex began to understand the concept of two-way communication, and would even occasionally interject and correct Pepperberg and her assistants in the lab if they made mistakes.

However, Pepperberg acknowledged that Alex, although uncommonly smart for a parrot, was not speaking language in the complex way that humans do. Rather, he was using syntax to establish two-way communication.

In addition, she concluded that he was able to comprehend abstract concepts and respond to specific questions, making his comprehension at least equal to that of a dolphin or a chimpanzee. Furthermore, Pepperberg claimed that Alex was emotionally on the same level as a two-year-old human. Far from simply responding to the tests, Alex would respond emotionally if he was tired from the test by slamming his cage door or throwing objects.

Alex the parrot died on Sept. 6, 2007 at the age of 31, much younger than the average lifespan of 50 years for parrots. At the time of his death, Pepperberg was working with him to further develop his mathematical skills, and she believed that he had not reached the levels that he could have been capable of.

His last words were spoken to Irene Pepperberg as she left the lab on . They were the same words he spoke to her every night before she went home: “You be good. I love you. You’ll be in tomorrow.”

Next, learn how dolphins have conversations like humans do. Then, learn about the difficult lives of albino animals.