Macuahuitl: The Aztec “Obsidian Chainsaw” Even More Fearsome Than It Sounds

The macuahuitl was plenty deadly enough to take you down. But the Aztecs would rather bring you to the edge of death, then sacrifice you alive.

Wikimedia Commons Aztec warriors wielding macuahuitls, as depicted in the Florentine Codex in the 16th century.

Little is known for sure about the macuahuitl, but we do know is positively terrifying. For starters, it was a thick, three- or four-foot wooden club spiked with a number of blades made from obsidian, said to be even sharper than steel.

This “obsidian chainsaw,” as it’s often now called, was likely the most feared weapon wielded by Aztec warriors both before and during the era of Spanish conquest in Mesoamerica starting in the 15th century. In fact, when the invading Spanish found themselves up against macuahuitl-wielding Aztec warriors, they did well to keep their distance — and with good reason.

Horrifying Tales Of The Macuahuitl

Anyone felled by a macuahuitl endured extreme pain that brought them agonizingly close to the sweet release of death before being dragged off to a ceremonial human sacrifice.

And anyone who encountered a macuahuitl and lived to tell about it reported horrifying tales.

Spanish soldiers told their superiors that the macuahuitl was powerful enough to decapitate not only a human, but also his horse. Written accounts say that a horse’s head would dangle by a flap of skin and nothing else after coming in contact with a macuahuitl.

According to one account from 1519 given by a companion of conquistador Hernán Cortés:

“They have swords of this kind — of wood made like a two-handed sword, but with the hilt not so long; about three fingers in breadth. The edges are grooved, and in the grooves they insert stone knives, that cut like a Toledo blade. I saw one day an Indian fighting with a mounted man, and the Indian gave the horse of his antagonist such a blow in the breast that he opened it to the entrails, and it fell dead on the spot. And the same day I saw another Indian give another horse a blow in the neck, that stretched it dead at his feet.”

The macuahuitl was not just an Aztec invention. Many of the Mesoamerican civilizations in Mexico and Central America used obsidian chainsaws on a regular basis. Tribes frequently fought each other, and they needed prisoners of war to appease their gods. Hence, the macuahuitl was a blunt-force weapon as well as one that could severely maim someone without killing them.

Whichever group wielded it, the macuahuitl was so powerful that some accounts claim that even Christopher Columbus was so impressed with its strength that he brought one back to Spain for display and testing.

The Design And Purpose Of The Macuahuitl

Mexican archaeologist Alfonso A. Garduño Arzave conducted experiments in 2009 to see if the legendary accounts were true. His results largely confirmed the legends, starting with his finding that the macuahuitl had two primary — and very brutal — purposes based on its design.

First, the weapon resembled a cricket bat in that the bulk of it consisted of a flat, wooden paddle with a handle on one end. The blunt portions of a macuahuitl could knock someone unconscious. This would allow Aztec warriors to then drag the unlucky victim back for a ceremonial human sacrifice to their gods.

Second, the flat edges of each macuahuitl contained anywhere from four to eight razor-sharp pieces of volcanic obsidian. The obsidian pieces could be several inches long or they could be shaped into smaller teeth that would make them appear like chainsaw blades. On the other hand, some models also had one continuous edge of obsidian stretching from one side to the other.

When chiseled to a fine edge, obsidian has better cutting and slicing properties than glass. And when using these blades, warriors could make a circular, slashing motion with a macuahuitl to easily cut open someone’s skin at any vulnerable point on the body, including where the arm meets the chest, along the legs, or at the neck.

Anyone who lived beyond the initial slash attack lost a lot of blood. And if the blood loss didn’t kill you, the eventual human sacrifice most certainly did. 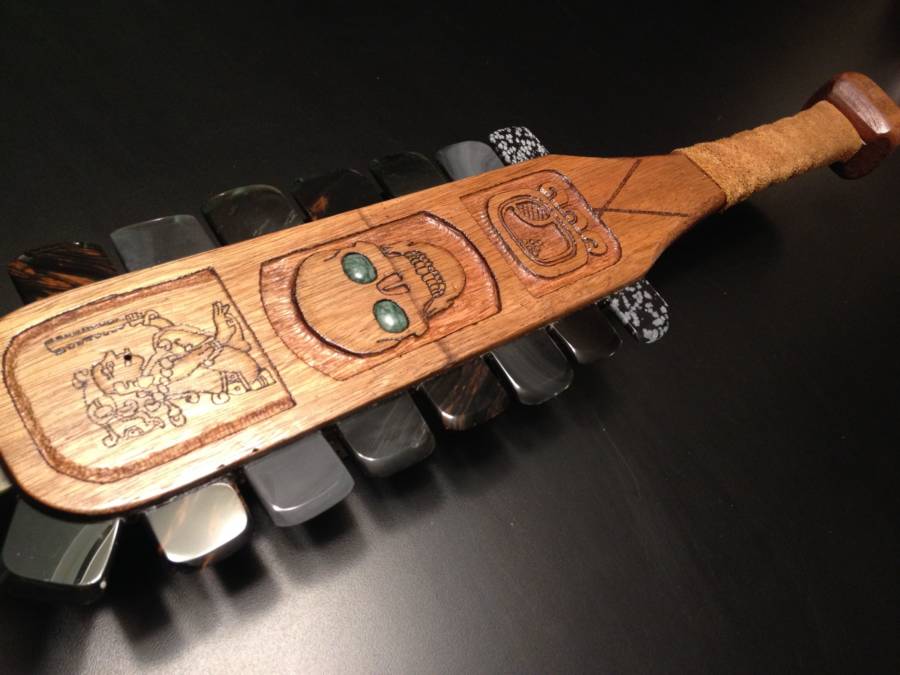 Sadly, no original macuahuitls survive to this day. The only known specimen to survive the Spanish conquests fell victim to a fire in Spain’s royal armory in 1849.

Nevertheless, some people have recreated these obsidian chainsaws for show based on illustrations and drawings found in books written in the 16th century. Such books contain the only accounts of the original macuahuitls and their devastating power.

And with a weapon this powerful, we should all feel a little safer knowing that the macuahuitl is a thing of the past.

After learning about the macuahuitl, read up on other terrifying ancient weapons like Greek fire and the Vikings’ Ulfberht swords.