21 Images Of Hunter S. Thompson, The Gonzo Writer Too Weird For This Planet

Born in 1937 in Louisville, Kentucky, Hunter Stockton Thompson went from a rocky childhood and an itinerant young adulthood to a workmanlike writing career fueled in part by a seemingly endless capacity for drugs and audacious behavior.

His trademark reporting style became what’s now called gonzo journalism, in which he made himself a central character in his own stories. And a character he was: his stories often centered on his panache for excessive consumption while surveying America’s political and cultural landscape in a way that no one had before.

Below, we look at 21 photos of the revered counterculture icon: 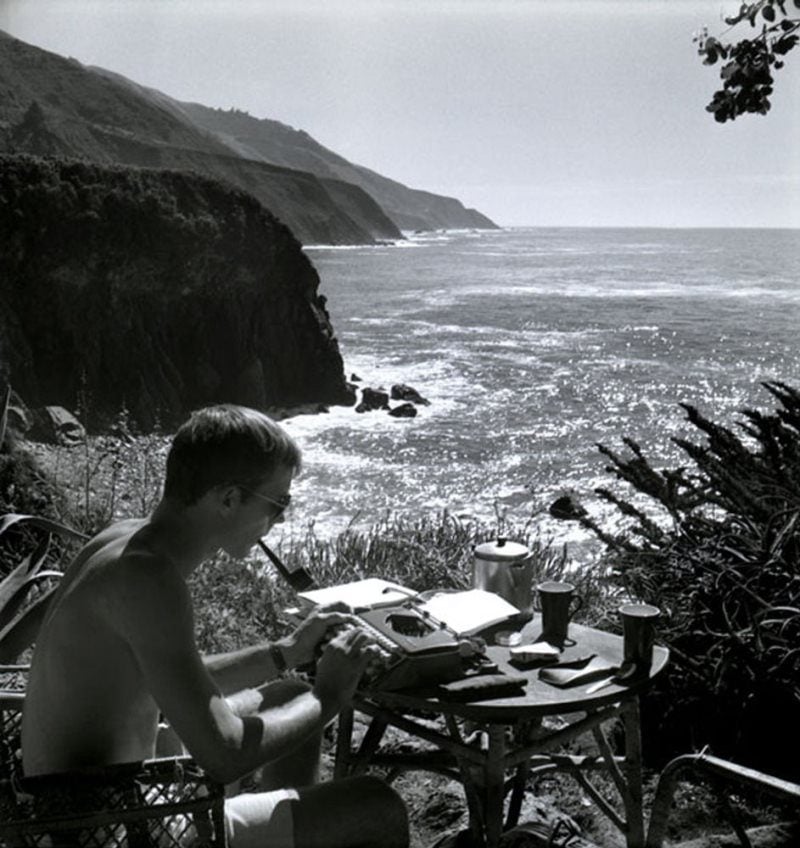 After being honorably discharged from the Air Force in 1957, Thompson began his career going through a series of companies and countries in rapid succession. Beginning with a stint with TIME in New York, he worked in Puerto Rico, Brazil, and California before settling in Aspen, Colorado in the late 1960s.Michael Ochs Archives/Getty Images 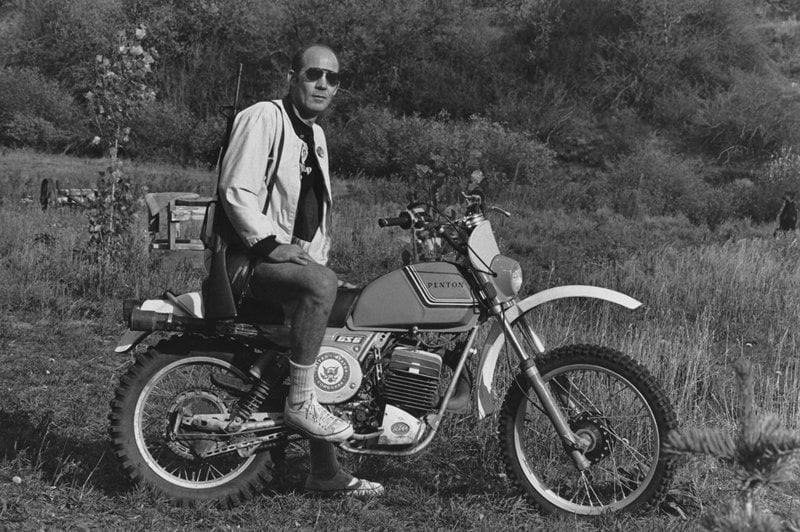 His breakthrough came in 1966 when his feature on the Hells Angels for The Nation was picked up as a book. After spending a year living with the motorcycle club, Thompson wrote Hell's Angels: The Strange and Terrible Saga of the Outlaw Motorcycle Gangs, which was published by Random House to popular and critical acclaim. Michael Ochs Archives/Getty Images 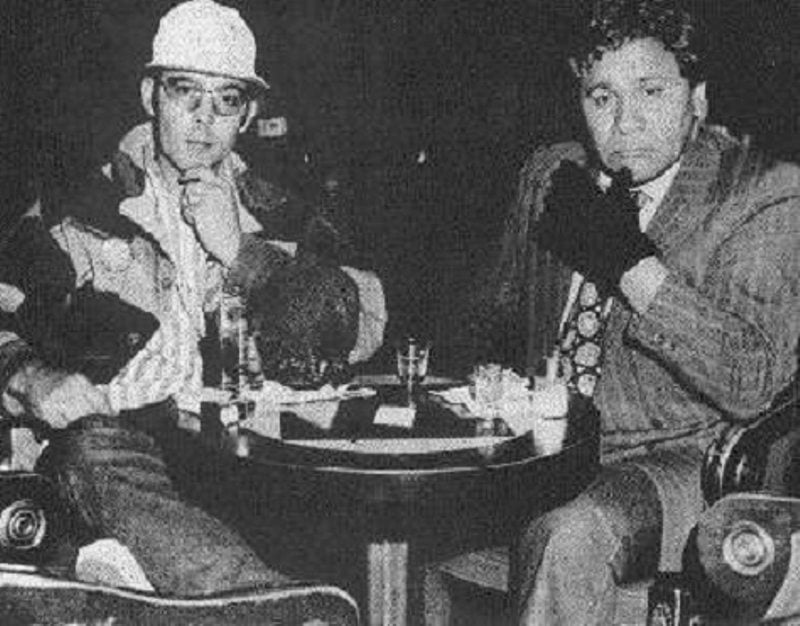 Reporting for Rolling Stone in 1970 on the killing of a Mexican-American in Los Angeles during an anti-Vietnam demonstration led Thompson to a fortuitous meeting with Oscar Zeta Acosta, a prominent Mexican-American lawyer.

Fleeing harassment of political activists by the LAPD, Acosta and Thompson traveled to Las Vegas under the influence of a cocktail of drugs. This and a subsequent trip would form the storyline for Fear and Loathing in Las Vegas.Wikimedia Commons 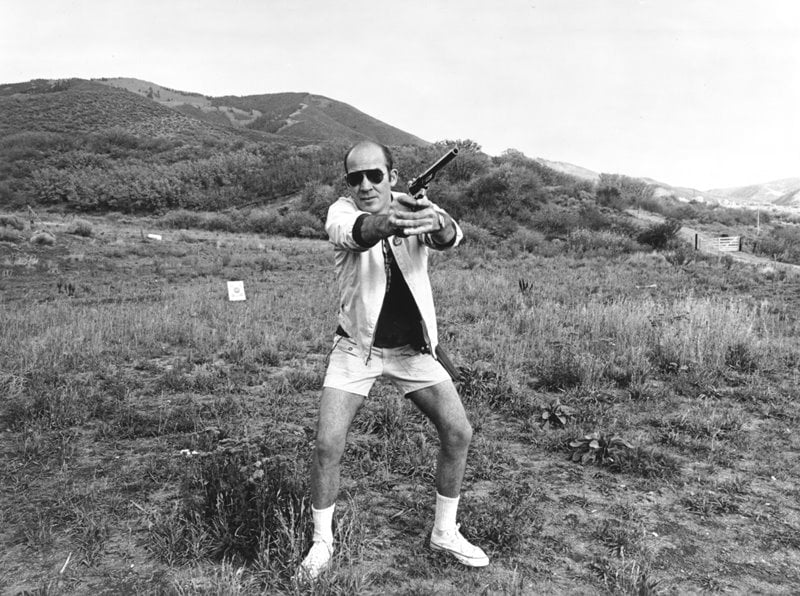 While a card-carrying member of the National Rifle Association, Thompson also was on the advisory board of the National Organization for the Reform of Marijuana Laws, was a strong proponent of the civil rights movement, and considered capitalism as the "single greatest evil in the history of human savagery."Michael Ochs Archives/Getty Images 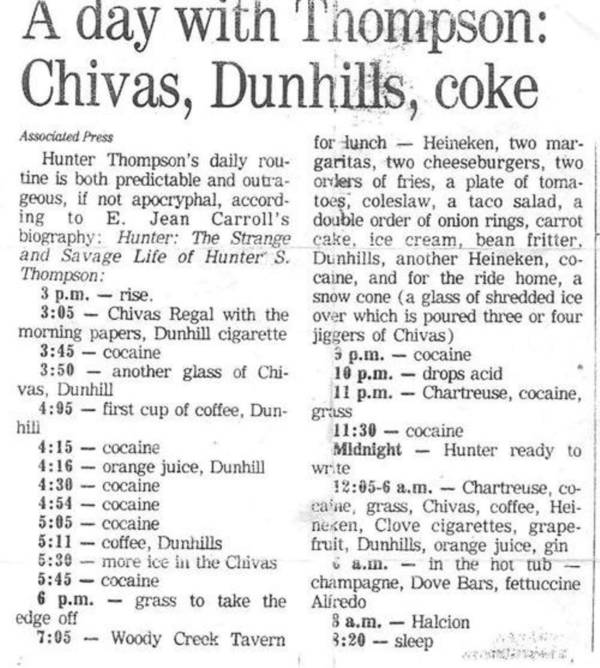 In the biography Hunter: The Strange and Savage Life of Hunter S. Thompson, E. Jean Carroll captured the excesses of Thompson's drug and alcohol consumption by chronicling his daily routine which began at 3 p.m. with whisky and ended at 8 a.m. with prescription sleeping pills.Associated Press 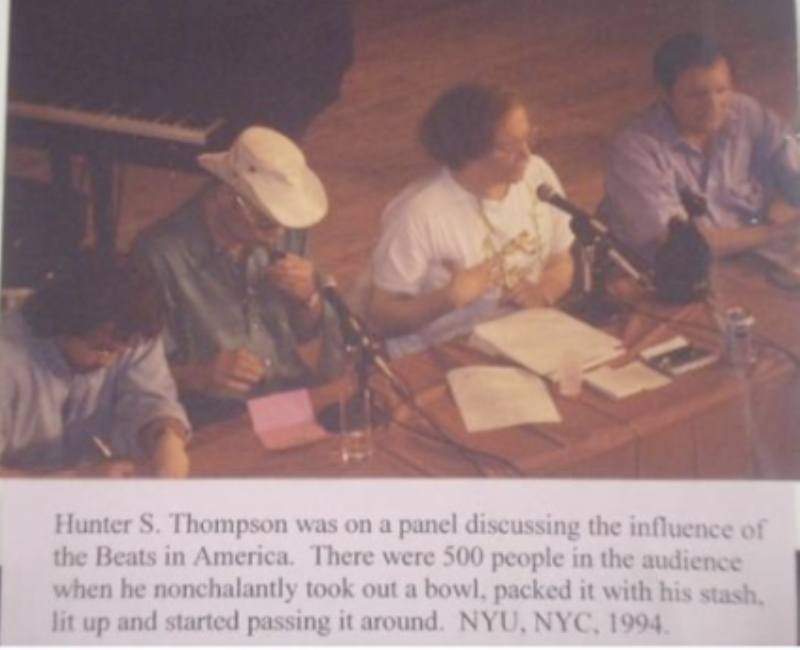 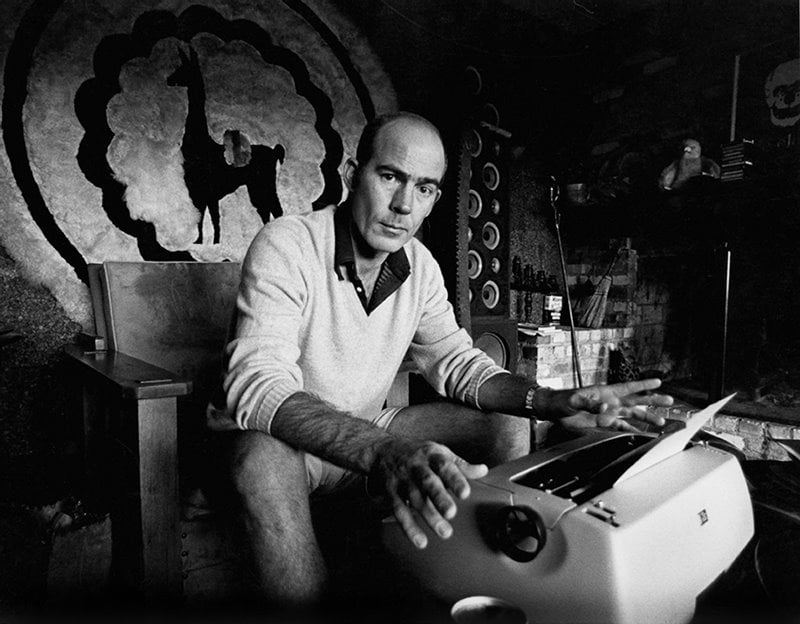 In spite of his well-deserved reputation for substance abuse, Thompson was an assiduous worker with a writing career that spanned across six decades, and included 16 books and a litany of short stories and articles.Michael Ochs Archives/Getty Images 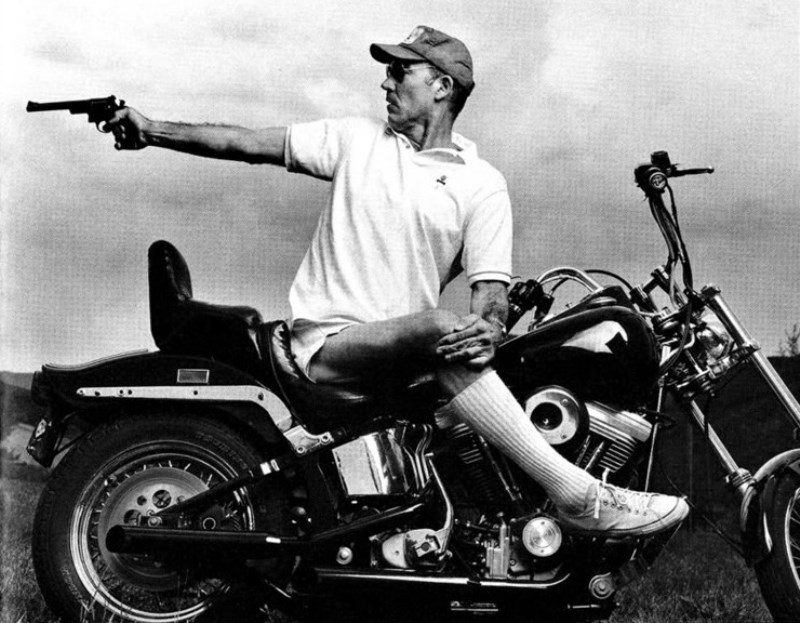 Thompson's professional career was not limited to writing: In 1970, he ran for sheriff of Pitkin County, Colorado on what he called the "Freak Power" ticket. Not above a political gambit, Thompson shaved his head and began to refer to the crew-cut wearing Republican candidate as "my long-haired opponent." 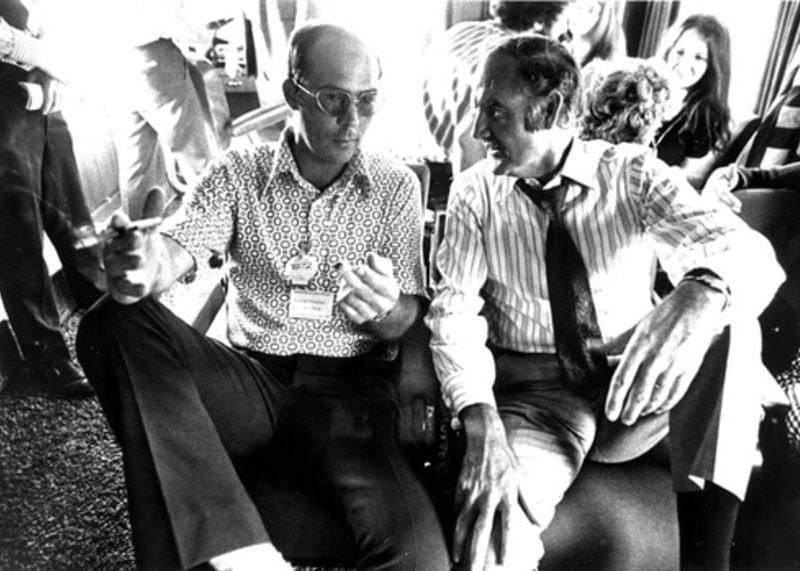 In December 1971, Thompson embarked on a year-long project of chronicling the presidential election, beginning with the Democratic primaries and concluding with the 1972 election that would turn into the book Fear And Loathing: On The Campaign Trail '72.

Pictured is Hunter S. Thompson with 1972 Democratic party presidential candidate George McGovern, who would go on to lose to Richard Nixon in the most lopsided presidential election in American history.Neale Haynes/Getty Images 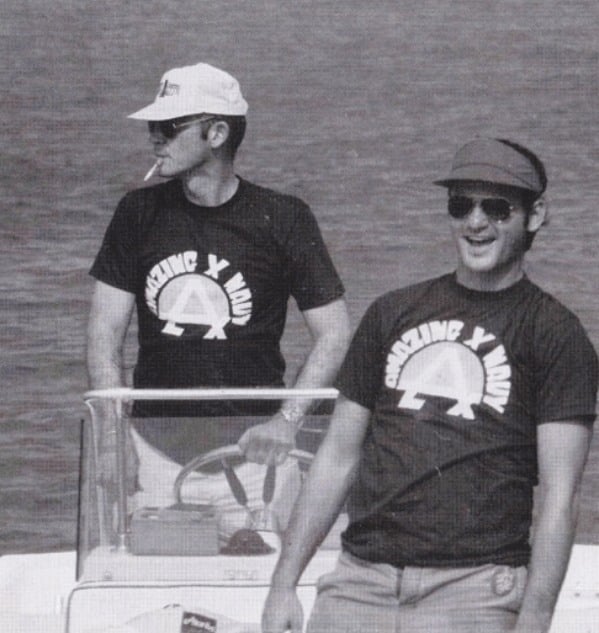 Thompson maintained a close relationship with actor Bill Murray after the movie adaptation of Thompson's Where The Buffalo Roam, featuring Murray, in 1980. In Thompson's last column for ESPN in 2005, he described how he called Bill Murray the preceding night at 3 a.m. to pitch the idea of shotgun golf, where one player would golf while the other would try to shoot his ball out of the air with a shotgun.Wikimedia 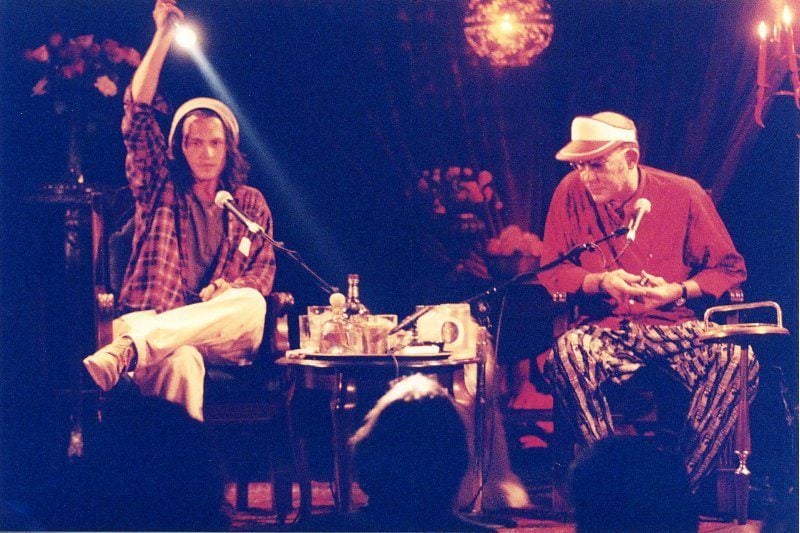 Thompson also developed a lifelong friendship with actor Johnny Depp that began when the pair made a propane tank and nitroglycerin bomb after meeting in 1994. Depp was later cast to play Thompson in the film adaptation of Fear And Loathing In Las Vegas and spent half of 1997 living at Thompson's Aspen estate studying for the part.Jeff Kravitz/Getty Images 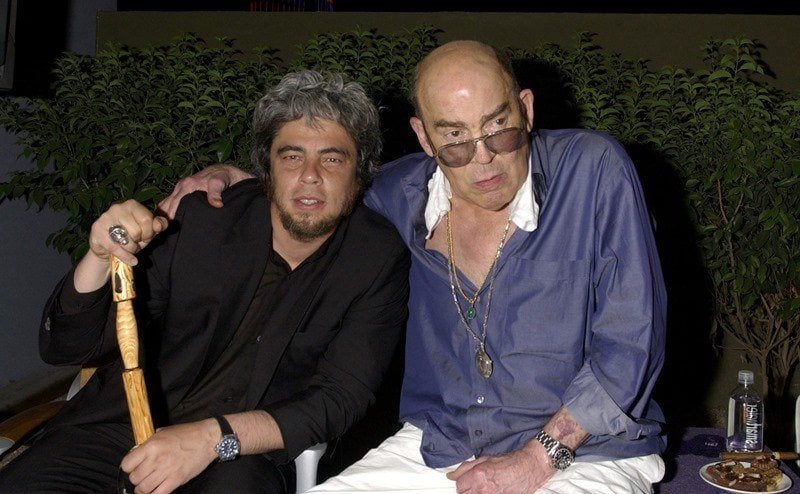 Thompson also became close with Benicio Del Toro, who was cast as Dr. Gonzo, the character based off of Oscar Zeta Acosta in Fear And Loathing In Las Vegas. To ready himself for the role, Del Toro gained 45 pounds in nine weeks.Denise Truscello/Getty Images 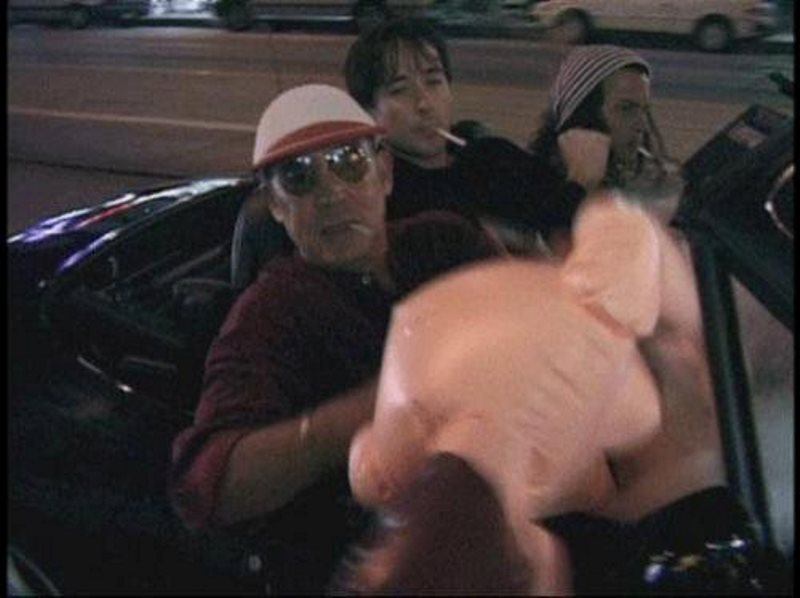 One of the most infamous Hunter S. Thompson escapades involves the night that Johnny Depp, John Cusack, and Thompson celebrated the "birthday" of Hunter's blowup doll in Los Angeles.

At the end of the evening, the trio was pulled over after the police department received a phone call reporting that someone was beating a blow up doll. After Hunter explained that the blowup doll had been ungrateful for the celebration, Depp, Cusack, and Thompson were let go with a warning.Wikimedia 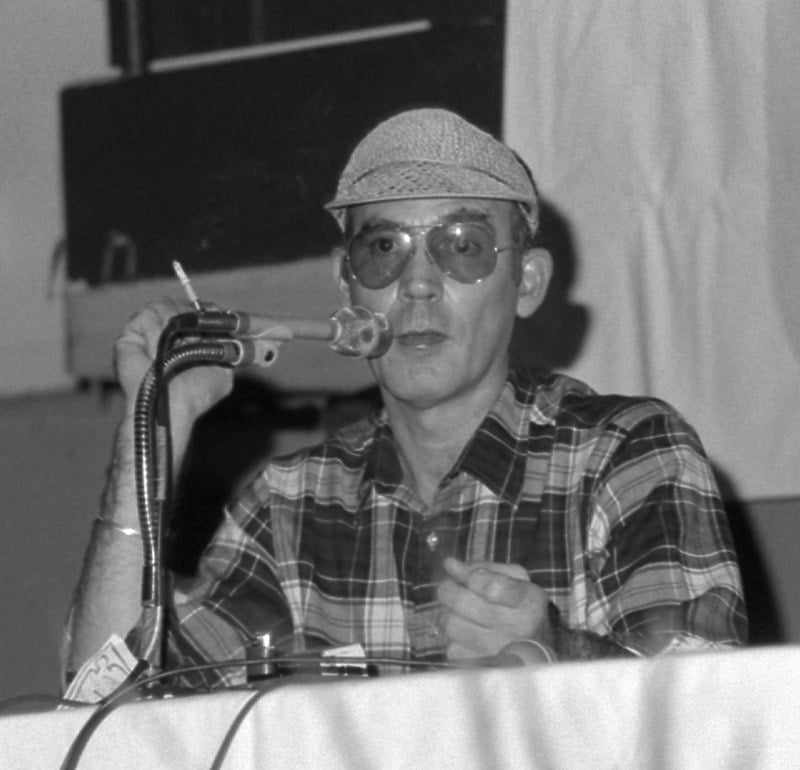 Thompson was notorious for his love of pranks, from which his celebrity friends were not spared. Case and point: Thompson showed up to Jack Nicholson's house on the latter's birthday in the middle of the night with a spotlight, a pistol, a tape of a pig being eaten by bears, and an elk heart. The elk heart was left on Nicholson's door.Frank Mullen/Getty Images 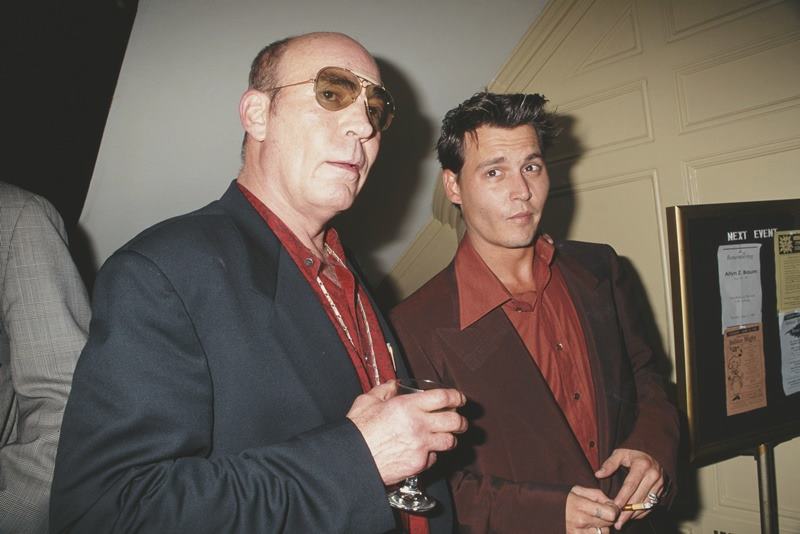 When Johnny Depp was living with Thompson in the late 1990s, Depp once went to ash his cigarette and noticed that the ashtray was sitting on a table that was simply a crate of dynamite. After Thompson confirmed that the crate was in fact full of real dynamite, he remarked "Good God, Colonel [Thompson's nickname for Depp]! You could have blown us all to bits!"Rose Hartman/Getty Images 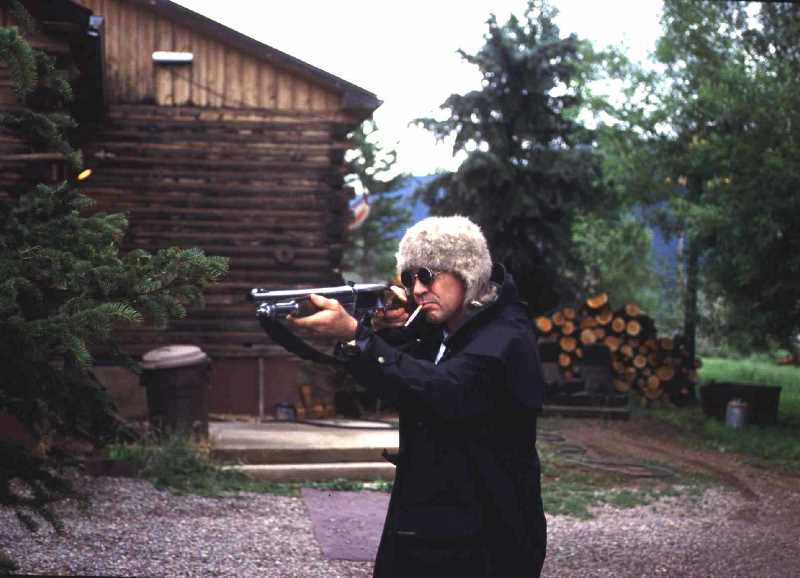 Thompson had several run-ins with law enforcement: he was detained after running from customs after getting caught with a bag full of ivory upon return from Africa in 1974; he was caught shooting at the house of a multi-millionaire neighbor with an automatic rifle in 1985; and he was found in possession of several sticks of dynamite in 1990.

Amazingly, Thompson only served jail time once, when he was 18, after having robbed a gas station three nights in a row with friends.Paul Harris/Getty Images 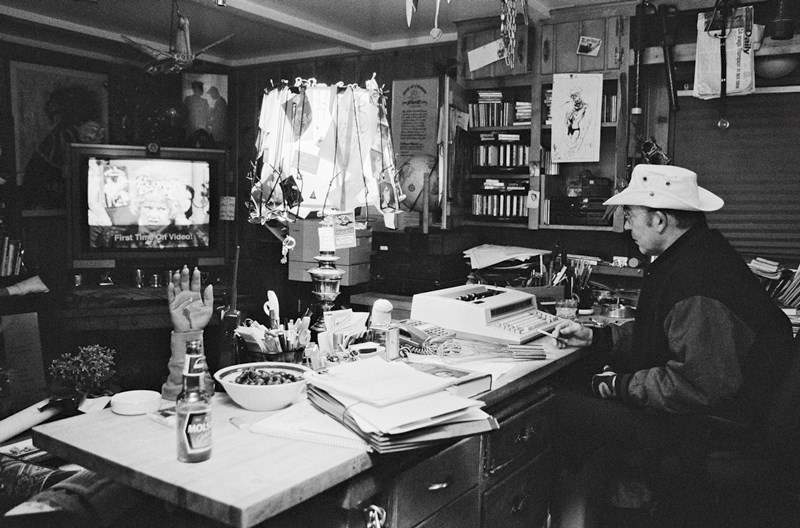 Thompson co-founded The Fourth Amendment Foundation and led a nationwide campaign to free Lisl Auman, a woman arrested for murdering a policeman even though she was handcuffed in the backseat of a police car during the shooting. After seven years, Auman's sentence was overturned by the Colorado Supreme Court in March 2005.Neale Haynes/Getty Images 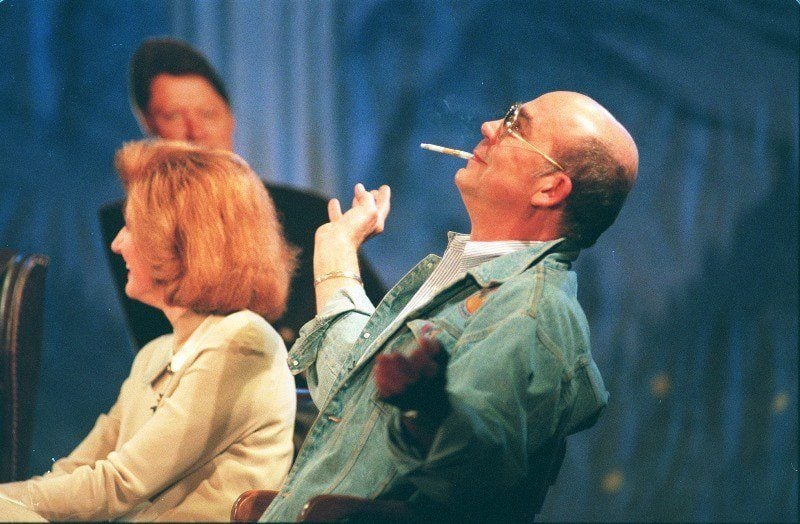 Thompson held an astute understanding of the political landscape and was quick to write about the foreboding realities of a post-9/11 America. Writing on September 12, 2001:

"The towers are gone now, reduced to bloody rubble, along with all hopes for Peace in Our Time, in the United States or any other country. Make no mistake about it: We are At War now… We are going to punish somebody for this attack, but just who or what will be blown to smithereens for it is hard to say. Maybe Afghanistan, maybe Pakistan or Iraq, or possibly all three at once. Who knows?" 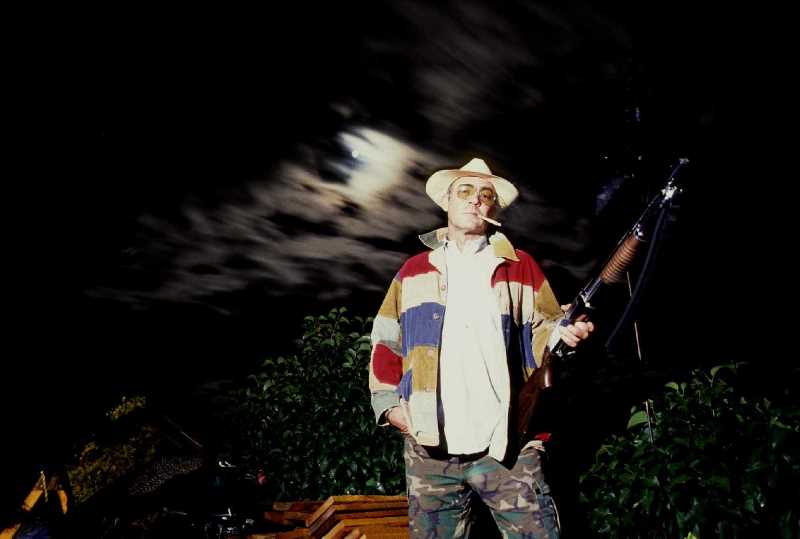 On February 20, 2005, Thompson took his own life at his farm in Colorado after battling a panoply of medical conditions. He left a note entitled "Football Season Is Over" with two lines of text: 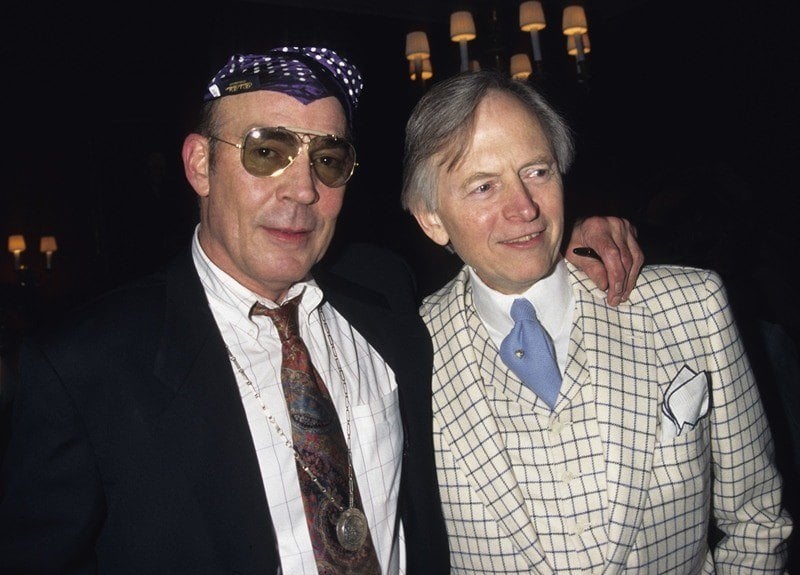 "Hunter's life, like his work, was one long barbaric yawp, to use Whitman's term, of the drug-fueled freedom from and mockery of all conventional proprieties... Yet he was also part of a century-old tradition in American letters, the tradition of Mark Twain, Artemus Ward and Petroleum V. Nasby, comic writers who mined the human comedy of a new chapter in the history of the West, namely, the American story, and wrote in a form that was part journalism and part personal memoir admixed with powers of wild invention, and wilder rhetoric inspired by the bizarre exuberance of a young civilization." 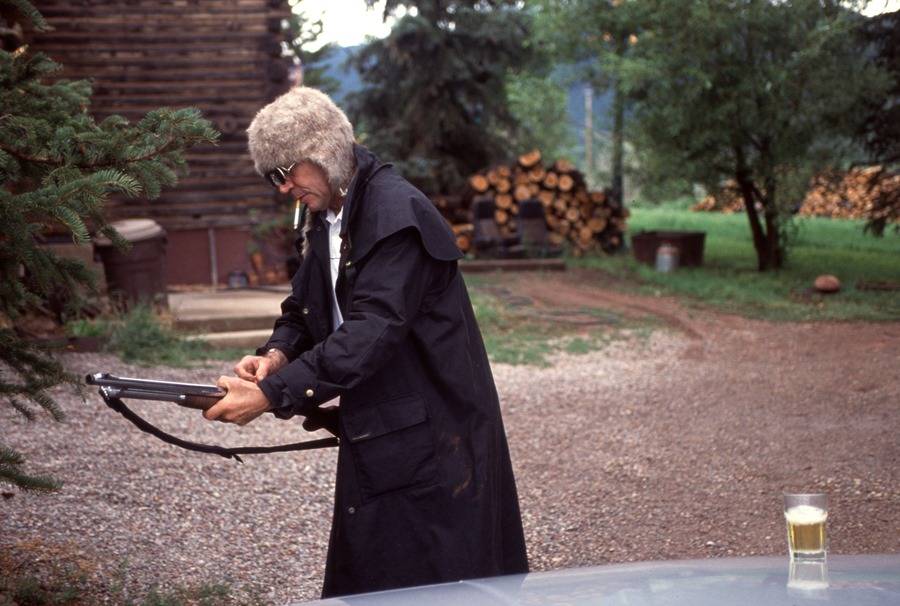 Four months after his death, a private funeral was held during which Thompson's ashes were fired from a cannon atop a 153-foot tower. The cost of the funeral — 3 million dollars — was paid for by Johnny Depp, with John Kerry, Bill Murray, Sean Penn, George McGovern, Charlie Rose, and Benicio del Toro all in attendance.Paul Harris/Getty Images

For more of Hunter S. Thompson's antics, watch this video of him getting into a gun battle with his neighbor in Aspen, Colorado over livestock intruding on his ranch:

And check out the video below of Hunter S. Thompson's funeral, where his ashes were shot out of a cannon by Johnny Depp:

If you enjoyed this gallery of Hunter S. Thompson's life, check out our other posts on Freddy Mercury's larger-than-life career and Salvador Dali being Salvador Dali.