Meet Luis Garavito, ‘The Beast’ Of Colombia Who Murdered Over 100 Children In The 1990s

From 1992 to 1999, Luis Garavito preyed upon and brutalized as many as 400 children and teenagers across Colombia, Ecuador, and Venezuela — and he’ll be up for parole soon.

Inside an isolated maximum security prison in Colombia there is a man named Luis Garavito.

Living separately from the other prisoners for his own protection, Garavito only takes food and drinks given to him by those he knows. His guards describe him as relaxed, positive, and respectful. He’s studying to be a politician, and upon his release, he hopes to start a career in activism, helping abused children.

Public DomainLuis Garavito, a.k.a. La Bestia or “The Beast” of Colombia, who killed over 100 children.

After all, abused children are something Garavito is an expert on — having abused over 300 of them himself.

Police believe the number is closer to 400, and continue to this day to attempt to prove it.

The Abusive Childhood Of Luis Garavito

Before becoming an abuser himself, Luis Garavito suffered a violent childhood. Born on January 25, 1957, in Génova, Quindío, Colombia, Garavito was the oldest of seven brothers, all of whom he claimed were physically and emotionally abused by their father.

At 16, Garavito left home and held a number of odd jobs throughout Colombia. He worked as a store clerk and, for a time, selling prayer cards and religious icons on the street. He reportedly developed an addiction to alcohol and was known for his temper. Police reports stated that he had once tried to kill himself and consequently spent five years in psychiatric care. 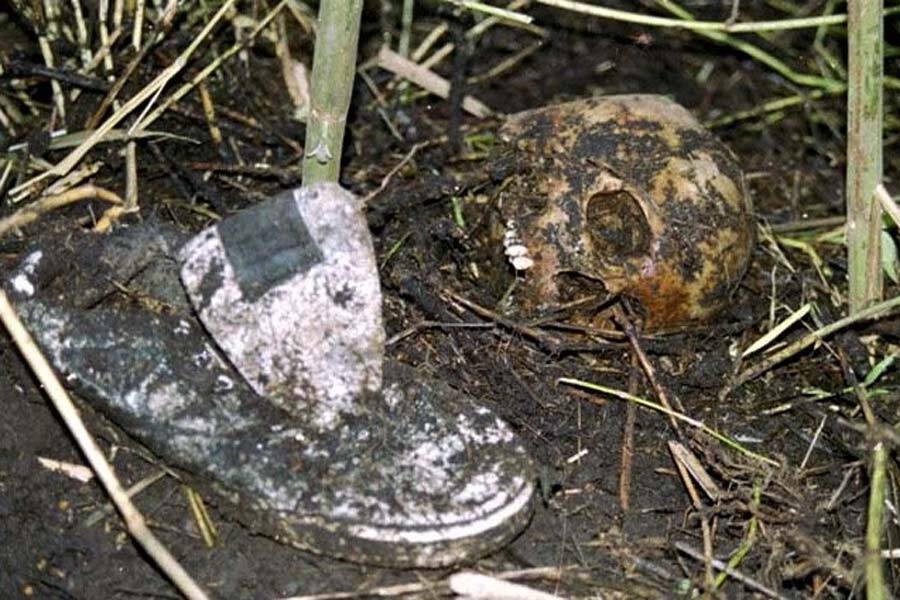 Meanwhile, a decades-long civil war raged in Colombia that had begun in the late 1960s and left thousands of citizens homeless, fending for themselves on the streets. Many of those left homeless were children, their parents either dead or long gone, ensuring that no one would notice if they went missing.

Luis Garavito would use this to his advantage in 1992 when he committed his first murder.

The Sadistic Murders Of The Beast

The geographic span of Garavito’s crimes was enormous. He preyed on potentially hundreds of boys in 54 Colombian towns, though largely in Pereira in the western state of Risaralda.

Careful about his crimes, Garavito specifically targeted the downtrodden, the homeless, and orphaned boys who roamed the streets looking for food or safety. Once he found one, he would approach and lure them away from the crowded city streets by promising them gifts or candy, money or employment.

And Garavito would dress the part when offering a job, impersonating a priest, a farmer, an elderly man, or a street vendor, looking for someone young to help around his house or business. He would rotate his disguises often, never appearing as the same person too often to avoid suspicion.

Once he’d lured the boy away, he would walk with him for a time, encouraging the boy to share with Garavito about his life to earn his trust. In reality, he was wearing the boys down, walking just long enough that they would tire, making them vulnerable and unwary. 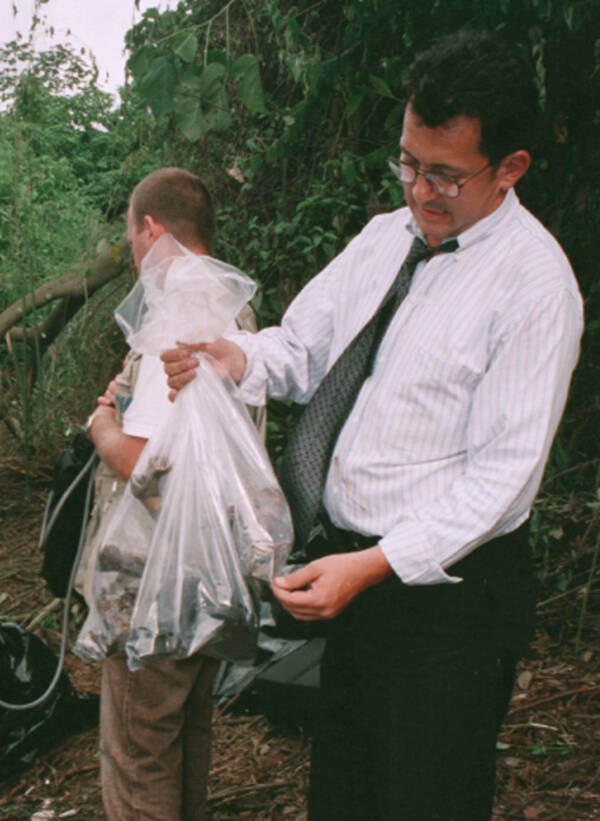 Luis Garavito would corner the tired victims and bind their wrists together. Then he’d torture them beyond belief.

But it wouldn’t be until five years after La Bestia murdered his first victim that police began to take notice of the missing children.

In late 1997, a mass grave was accidentally discovered in Pereira, prompting police to launch an investigation. The scene of some 25 corpses was so macabre that police initially suspected a satanic cult was behind it.

Then, in February of 1998, the bodies of two naked children were found on a hillside in Pereira, lying next to each other. A few feet away, another corpse was found. All three had their hands bound and their throats slashed. The murder weapon was found nearby.

While searching the area around the three boys, police came across a note with an address handwritten on it. The address turned out to be Luis Garavito’s girlfriend, whom he had been dating for years. Though he wasn’t in the home at the time, his things were, and the girlfriend gave the police access to them.

In one of Garavito’s bags, police discovered pictures of young boys, detailed journal entries in which he described each of his crimes, and tally marks of his victims.

A search for Garavito continued for days, during which known residences of his were searched, as well as local areas where he was known to hang out to look for new victims. Unfortunately, none of the search efforts turned up any information on Garavitos whereabouts. That is, until April 22.

Roughly a week after the hunt for Garavito had begun, police in a neighboring town picked up a man on suspicion of rape. Earlier, a young man sitting in an alleyway had noticed a young boy being followed and eventually accosted by an older man. Thinking that the situation was dire enough to intervene, the man rescued the boy and alerted authorities.

The police arrested the man on suspicion of attempted rape and booked him. Unbeknownst to them, they had in their custody one of world’s deadliest killers. 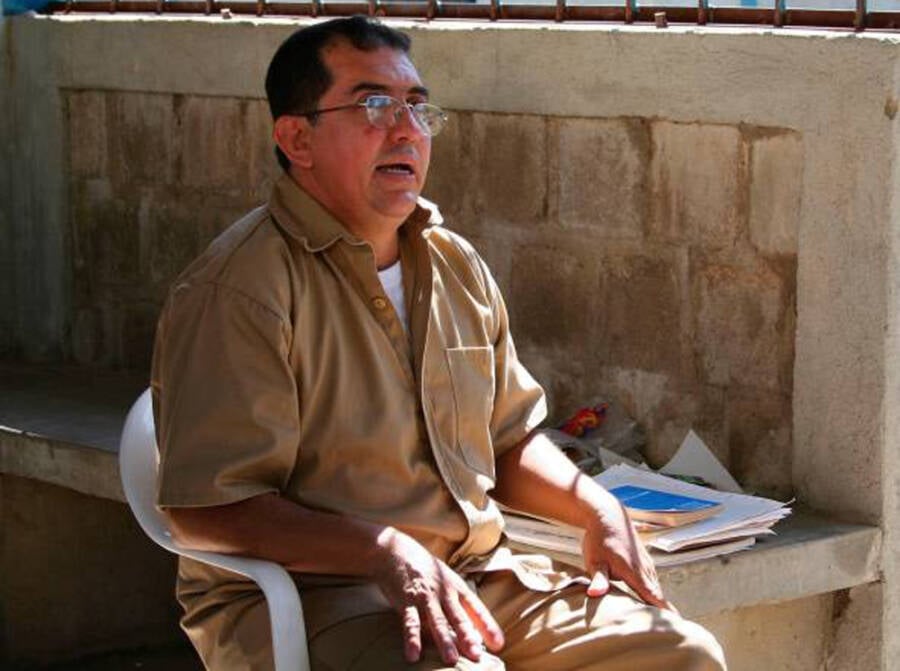 YouTubeLa Bestia in a prison interview. He will be up for parole in 2023.

As soon as he was interrogated by Colombian national police, The Beast cracked under the pressure. He confessed to abusing 147 young boys and burying their bodies in unmarked graves. He even drew maps to the gravesites for police.

His stories were corroborated when police found a pair of eyeglasses at one of the crime scenes that matched Garavito’s highly specific description. In the end, he was convicted on 138 counts of murder, though his other confessions continue to be investigated.

The maximum penalty for murder in Colombia is roughly 13 years. Multiplied by the 138 counts he received, Luis Garavito’s sentence came out to 1,853 years and nine days. Colombian law states that people who have committed crimes against children are required to serve at least 60 years in prison.

However, because he helped the police find the victim’s bodies, Luis Garavito was given 22 years. In 2021, he made a very public plea for his release, saying he has been a model inmate and is living in fear of being killed by other inmates.

However, a judge denied the request because he had not paid a fine for his victims that roughly totaled $41,500. La Bestia remains behind bars and is currently up for parole in 2023.

After learning about the horrifying crimes of serial killer Luis “La Bestia” Garavito, check out the story of Edmund Kemper, the serial killer whose story is almost too disturbing to talk about. Then, take a look at these 21 quotes by serial killers that will chill you to the bone.