Oklahoma mom Sierra Sharry lost her husband in 2014, but found a way to honor his memory by having him photoshopped into a family photo in April 2015. Her deceased husband appears as a ghostly figure and completes a picture the couple wasn’t able to capture while he was alive. 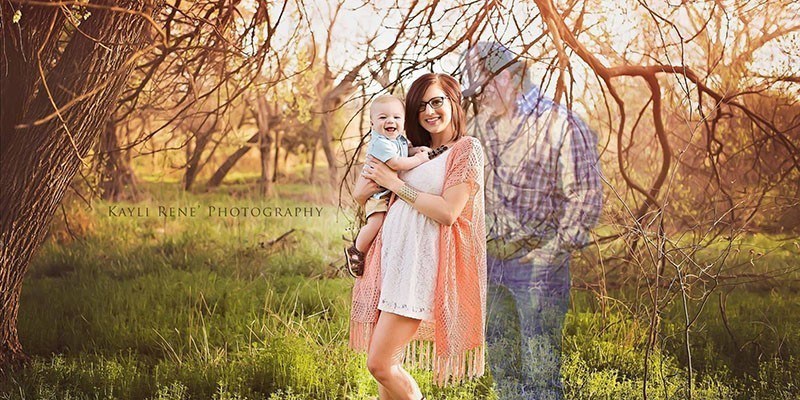 While tools like Photoshop are new, Sharry’s photo is rather old as a photographical concept. Coinciding with and enabling the rise of spiritualism, trick photography has been used since the late 19th century as an attempt to bring the living closer to the dead.

Spirit photography was first popularized by photographer William H. Mumler in the 1860s. Mumler discovered double exposures by accident and from then on, he would use this technique to add images of the deceased to pictures of their living loved ones. He worked as a medium and used his photography to surreptitiously convince his clients that the dead were indeed still around, but in spirit form. When people identified some of Mumler’s “spirits” as living Boston residents, however, Mumler was tried for fraud. Though found not guilty, his career and reputation plummeted. 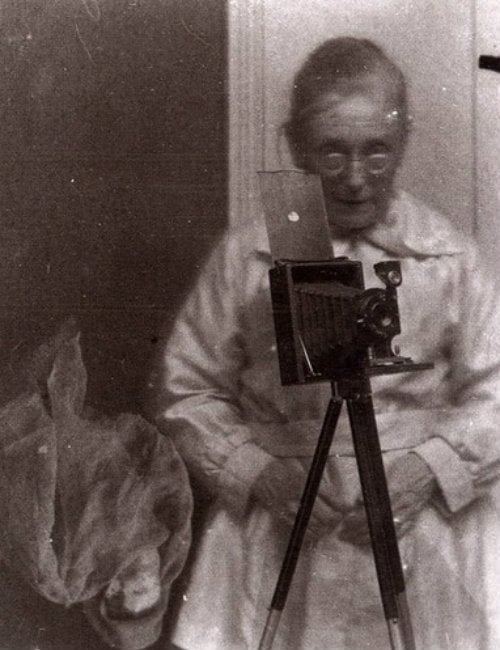 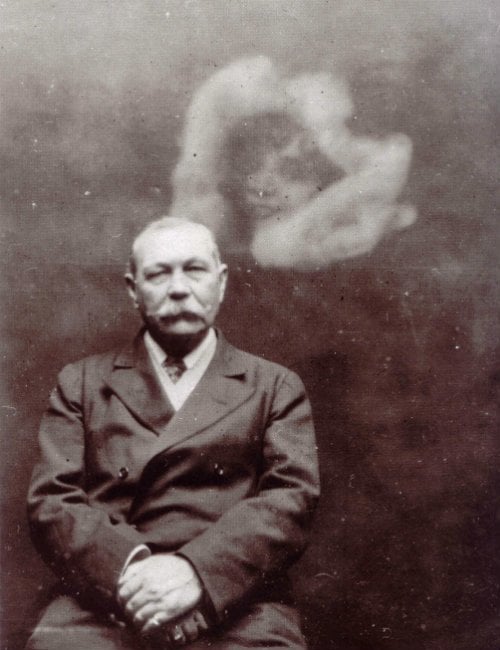 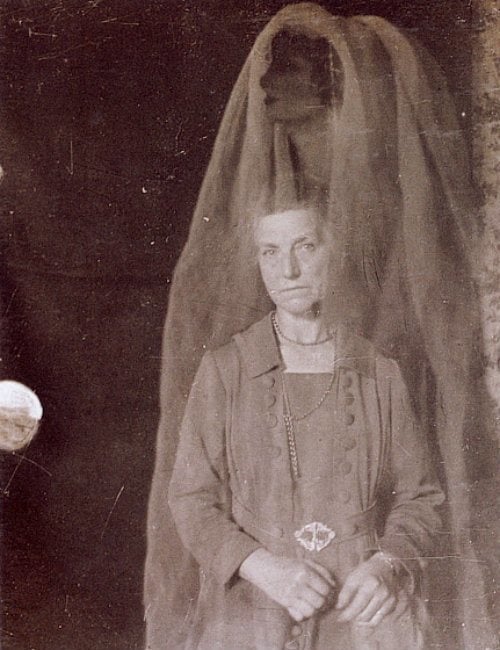 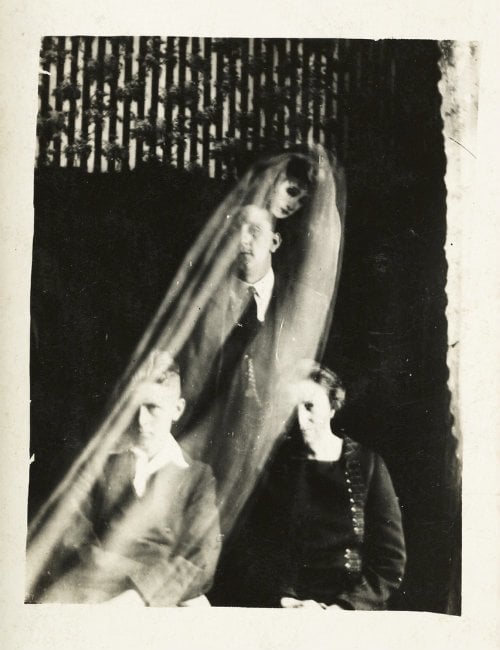 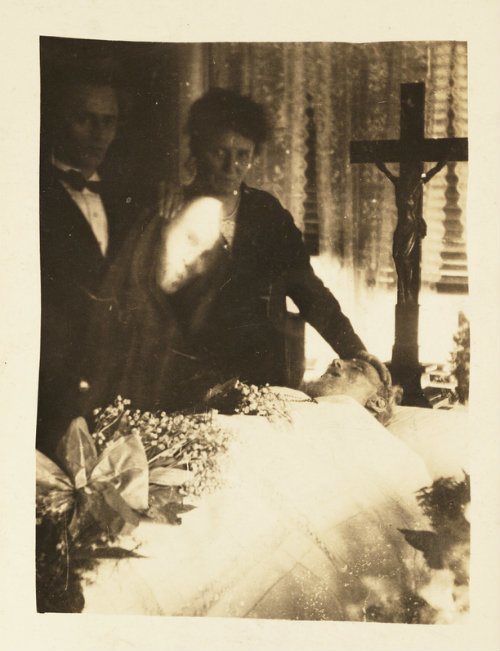 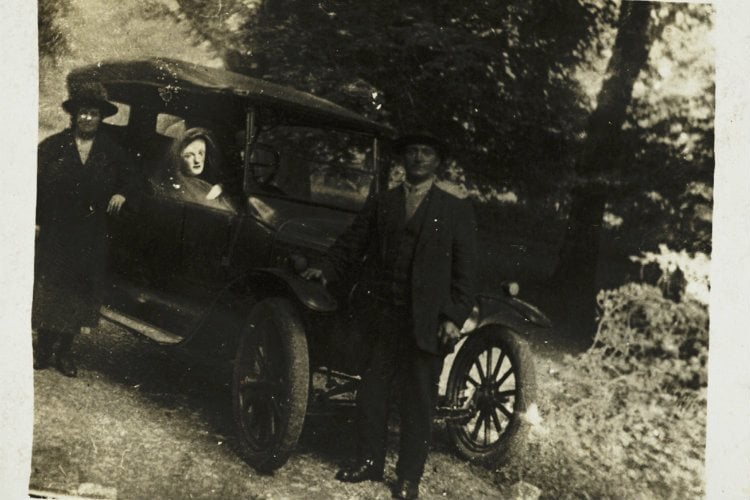 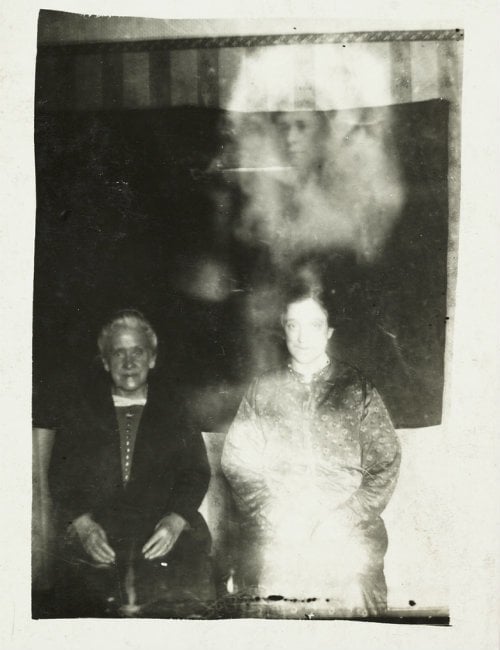 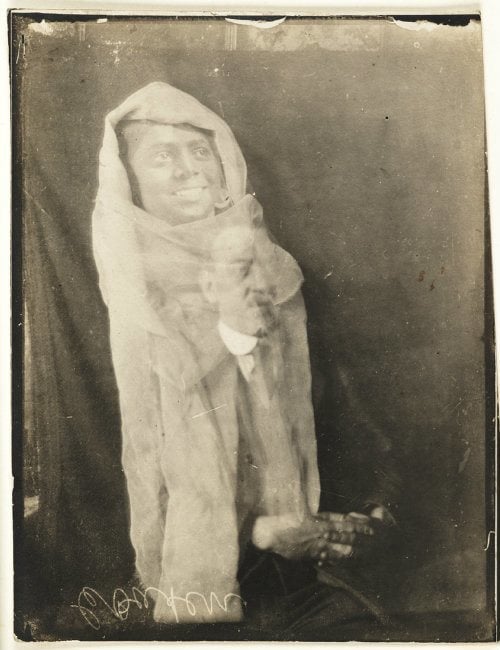 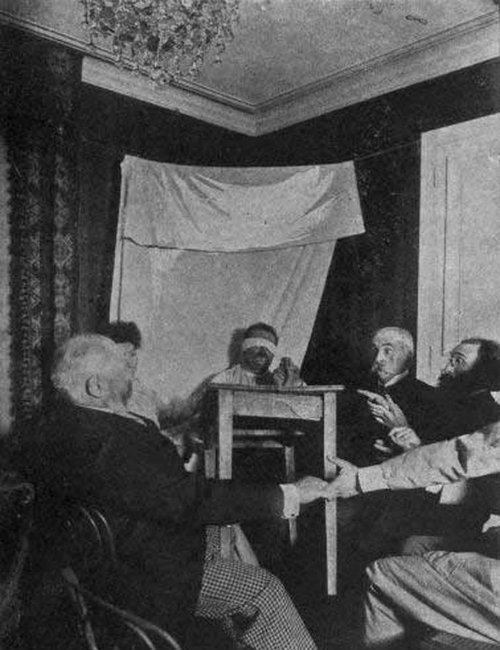 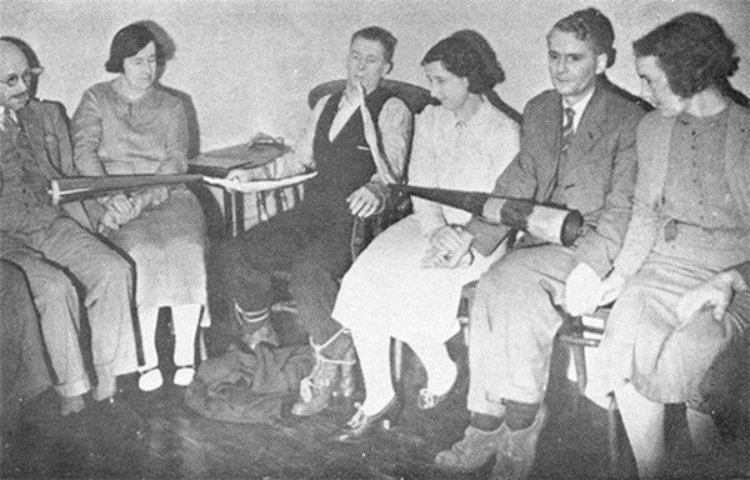 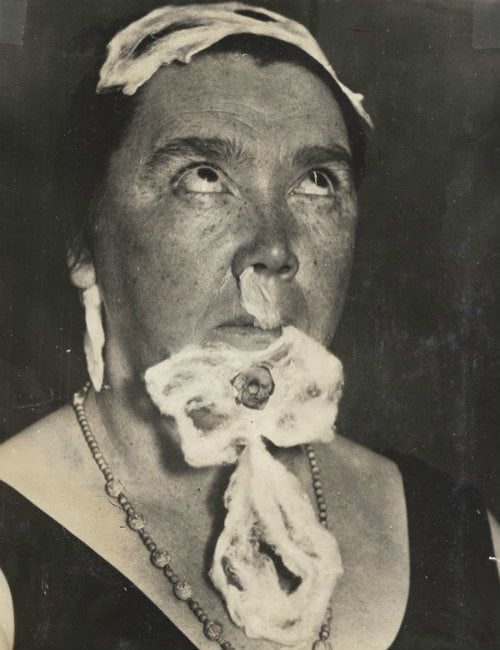 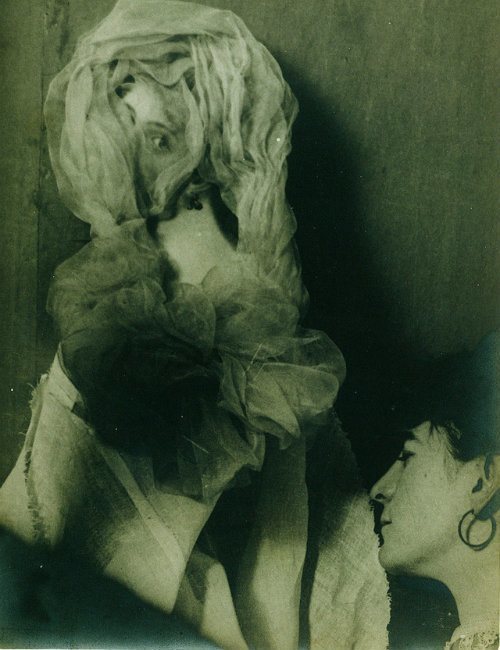 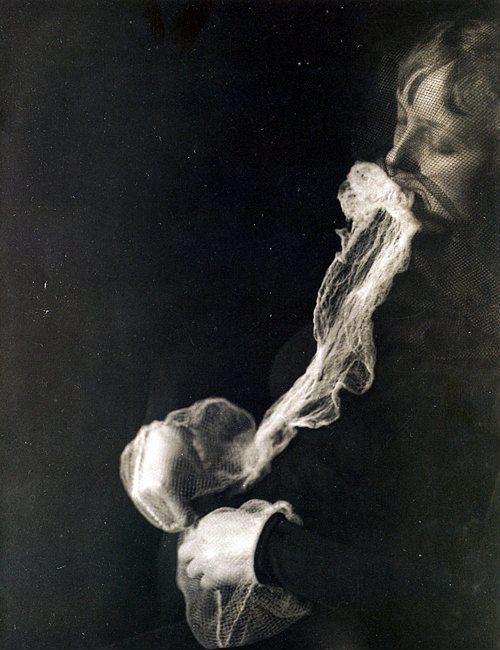 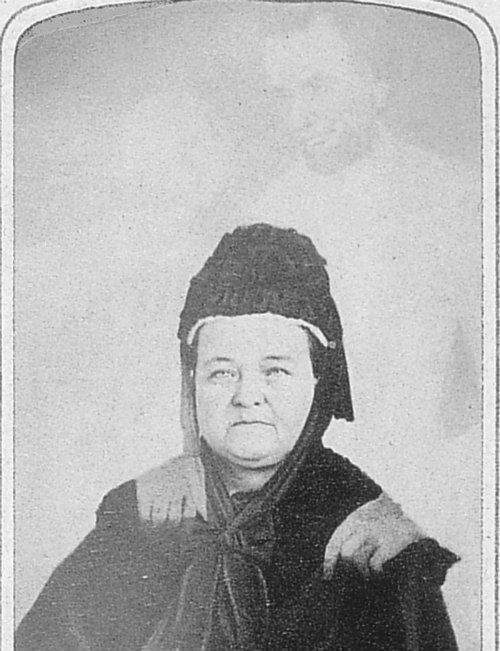 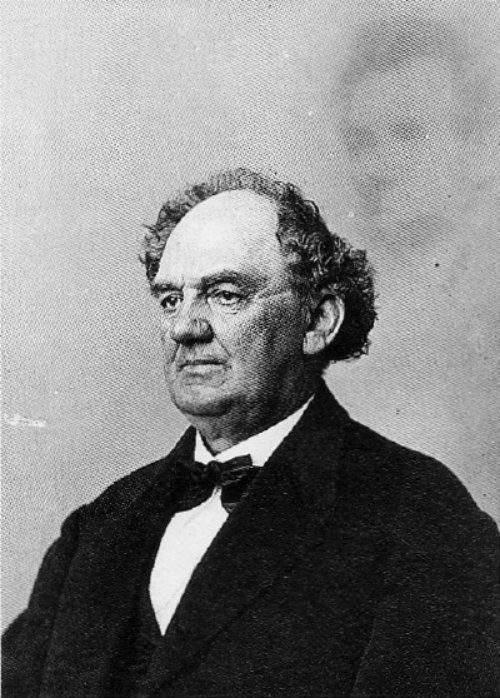 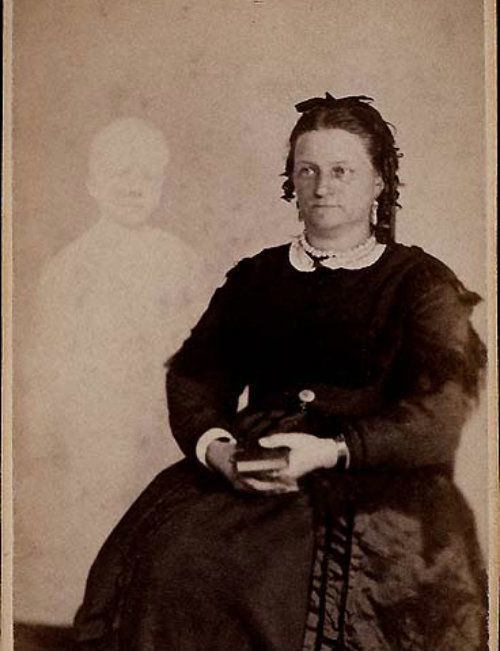 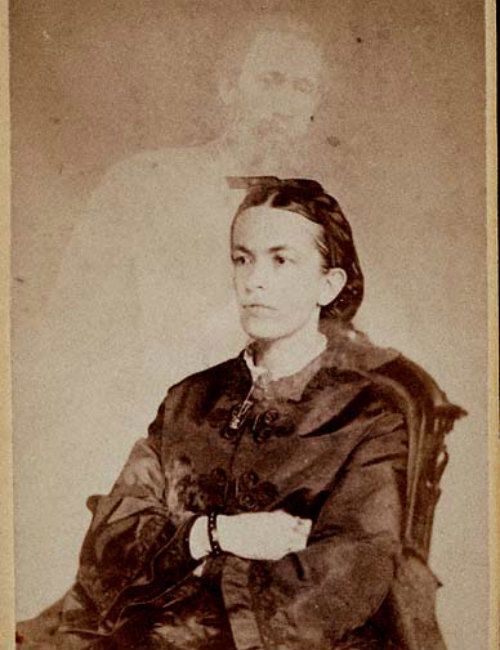 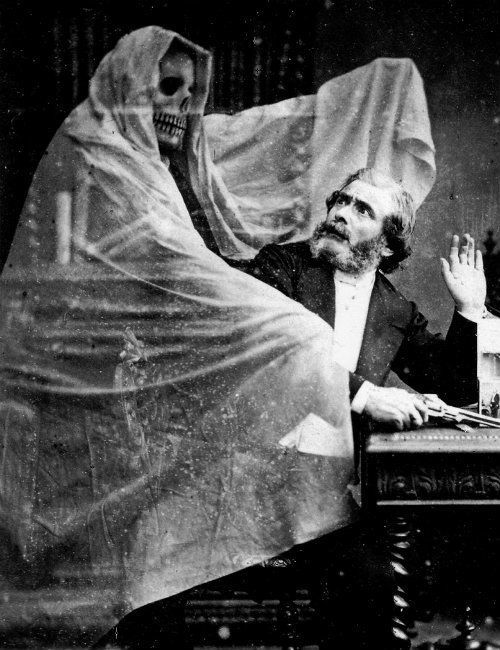 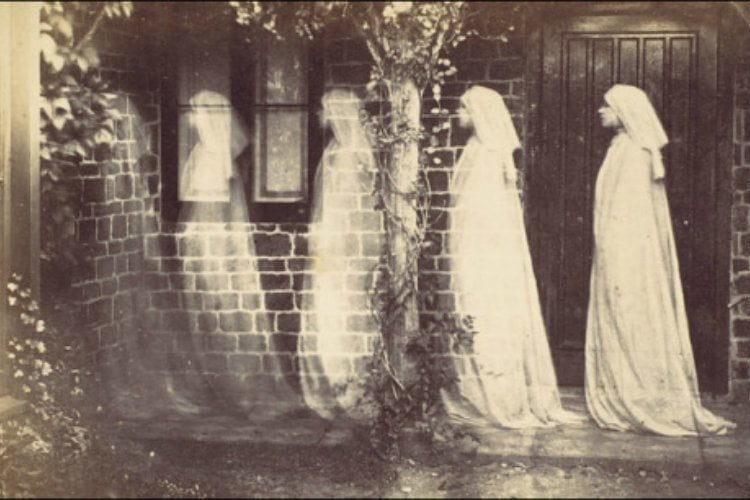 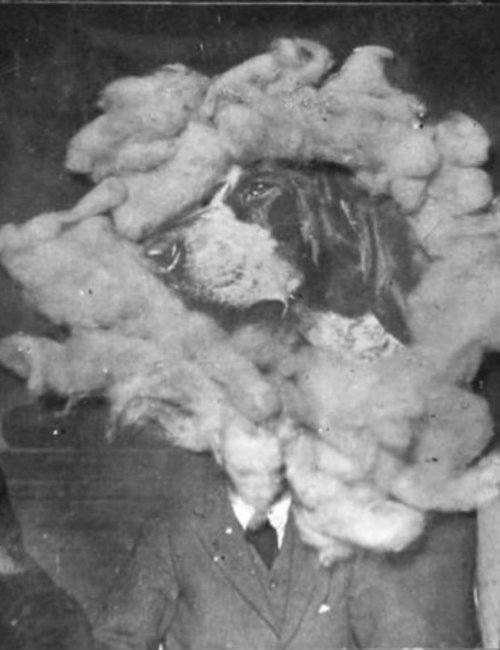 1 of 21
Ada Emma Deane, pictured in a self-portrait, was a spiritualist who claimed to capture spirits in photos, but she was often surrounded by controversy. Of particular concern was the fact that she would hold all photographic plates to “pre-magnetize” them. Skeptics believed this gave her time to manipulate the undeveloped plates. Source: Spirit Archive
2 of 21
Sir Arthur Conan Doyle – yes, the one that wrote Sherlock Holmes – was steadfast supporter of Deane and is pictured her in one of her photos. Source: Wikimedia
3 of 21
Deane offered up her photos for testing, but the results were never conclusive. Source: Spirit Archive
4 of 21
Former carpenter William Hope became interested in spirit photography after he allegedly captured a spirit in a photo in 1905. He founded and led a group of six spirit photographers called the Crewe Circle. In this photo, a family appears to have a relative floating around them. Source: The Atlantic
5 of 21
Hope became a professional medium and had a booming career until he was exposed as a fraud in 1920 by Edward Bush. Bush sent him a photo of a living person and claimed the individual was dead. After a spiritual sitting with Hope, the picture of the living person showed up in photographs Hope took of Bush. Source: The Atlantic
6 of 21
Paranormal investigator Harry Price caught Hope again in 1922 when he secretly marked Hope’s photographic plates and gave him additional plates that had also been marked. Price knew that any images created with plates would transfer the markings. None of the images created by Hope had any identifying marks. Source: The Atlantic
7 of 21
Following Hope’s second exposure, Arthur Conan Doyle led a mass exodus of members from the Society for Psychical Research because he believed the organization (of which Price was a member) was against spiritualism. Source: Public Domain Review
8 of 21
In this picture, Hope portrays the ghost of a servant floating over her old employer. Source: io9
9 of 21
Italian medium Auguste Politi leads a séance blindfolded and is still able to make the table levitate. Source: Spirit Archive
10 of 21
Welsh medium Jack Webber as ectoplasm flows from his mouth. Trumpets also appear to float in mid-air, which were later proven to be faked. Source: Oddee
11 of 21
Thomas Glendenning Hamilton captured photos of spiritualist Mary Ann Marshall as ectoplasm spewed from her body. The substance is clearly made from paper. Some skeptics suspected that Hamilton may have been in on the hoax. Source: Oddee
12 of 21
Photographer Albert Von Schrenck-Notzing investigated multiple mediums. In this one, a spirit can be seen surrounded by ectoplasm. Source: Tumblr
13 of 21
Von Schrenck photographed medium Stanislawa P in 1913 and produced this photo of her spewing ectoplasm. In 1954, it was confirmed that the photographer knew about the fraudulent presentation of ectoplasm, but wanted to encourage spiritualism, so he ignored the spiritualists’ fakes. Source: Tumblr
14 of 21
One of Mumler’s more famous photographs is this one of Mary Todd Lincoln with the ghost of her deceased husband and former president, Abraham taken in the early 1870s. Source: Yoga Feeling
15 of 21
Showman P.T. Barnum hired Abraham Bogardus to create this photo of Barnum and Lincoln’s ghost. He testified against William H. Mumler because he actively deceived the public and this photo was used to display how easily a photo can be manipulated. He also offered $500 to any medium who could actually prove their ability to speak with the dead. Source: Forensic Genealogy
16 of 21
A woman sits side by side with a child’s ghost. Fraudulent photographers would often cut out other photos and compile them into one print. Source: The Atlantic
17 of 21
Spiritualist Fanny Conant photographed with her brother’s ghost. Source: Wikimedia
18 of 21
Eugene Thiebault achieved this picture of illusionist Henri Robin through the use of double exposure. The print was used to advertise for Robin’s magic show. Source: Tumblr
19 of 21
This eerie image portrays the ghost of St. Bernadette phasing through a wall. Source: Tumblr
20 of 21
Certainly the most ridiculous photo in this list is this one of a floating dog head engulfed by ectoplasm taken by the Falconer Brothers. It’s surprising anyone bought into this. Source: io9
21 of 21 Nevertheless, the popularity of his spirit photos inspired others to capitalize on human gullibility and pursue the craft. These photos remained popular into the early 1900s and incorporated various techniques to “prove” the existence of ghosts, including double exposures, invisible strings, magazine cut-outs and dolls. Some photographs were captured during séances and involved ectoplasm, a spiritual substance supposedly “exteriorized” by mediums. In reality, mediums used cotton balls, cheesecloth and egg whites to make it.

Most experts agree that these old spirit photos are fraudulent, but it doesn’t change the fact that many people just want to believe that the souls of their loved ones live on. In the case of Sierra Sharry, she merely wants to ensure that her son will always have a family photo with Dad.