The Incredible Story Of Igbo Landing, When West African Captives Drowned Themselves To Avoid Being Enslaved

During the Igbo Landing of 1803, approximately 75 captives from present-day Nigeria died by mass suicide in Georgia's Dunbar Creek rather than face a life in chains.

For hundreds of years, enslaved people from Africa were kidnapped, crammed onto slave ships, and whisked to the Americas. But in 1803, 75 Igbo and other West African people from modern-day Nigeria fought back in a remarkable event known as Igbo Landing.

After being sold in Savannah, Georgia and forced onto a ship bound for St. Simons Island, the captives revolted. They overpowered the slavers manning the vessel, commandeered the ship, and docked it at Dunbar Creek.

Then, the captives made a wrenching choice. Instead of surrendering to the slavers waiting on the shore, they marched into the water and drowned themselves. What happened at Igbo Landing has been called a mass suicide, but many see it differently — as an act of mass resistance.

This is the story of the rebellion at Igbo Landing

The Igbo And The American Slave Trade 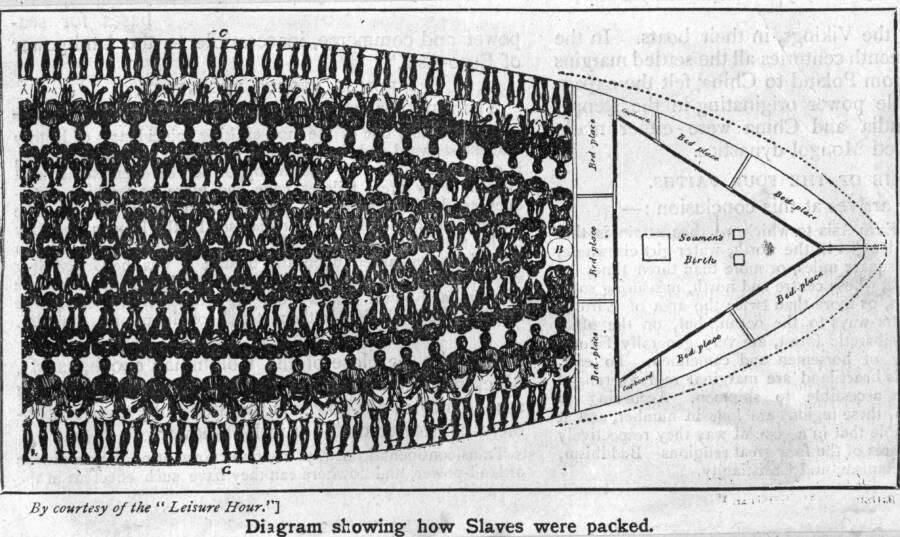 Henry Guttmann Collection/Hulton Archive/Getty ImagesA diagram of a slave ship from circa 1750. Many of the captive Africans taken to the Americans were Igbo.

By the time Igbo Landing took place in 1803, the slave trade in the Americas had existed for almost 200 years. Millions of healthy men and women were abducted from Africa and sent to the New World, where they toiled under harsh conditions on plantations along the southern coast, per History.

As the Library of Congress notes, the voyage from Africa to the New World was a tortuous one. Captives were forced into quarters below deck so cramped that they often couldn’t stand up. Scores died from suffocation, malnutrition, and disease, and others were tortured and killed by the crew.

And many of these captives were Igbo. As historian Douglas B. Chambers noted in his book, Murder at Montpelier: Igbo Africans in Virginia, 1.3 million of the 1.7 million people taken from the Bight of Biafra slave hub during the Atlantic slave trade were Igbo. Of the 37,000 Africans who arrived in Virginia from Calabar (in present-day Nigeria) in the 18th century, 30,000 were Igbo.

Hundreds of thousands of Igbo who survived the journey across the Middle Passage over the years were swiftly sold and bought as slaves on American shores. But in 1803, a group of Igbo and other West Africans resisted.

The Rebellion At Igbo Landing

In May 1803, Black Past reports that a slave ship called the Wanderer transported Igbo and other West African captives to Savannah, Georgia. Like generations before them, approximately 75 of them were sold to slavers. John Couper and Thomas Spalding paid about $100 for each person, then forced them onto another vessel, the York, bound for St. Simons Island.

But the captives resisted. The National Museum of African American History and Culture explains that they rose up against their captors, drowned them, and docked the comandeered vessel at Dunbar Creek in St. Simons Island.

There, they faced an impossible choice. With slavers waiting on the shores, according to Georgia Public Radio, many of the Igbo decided to march into the waters of Dunbar Creek instead of surrendering to a life of slavery. 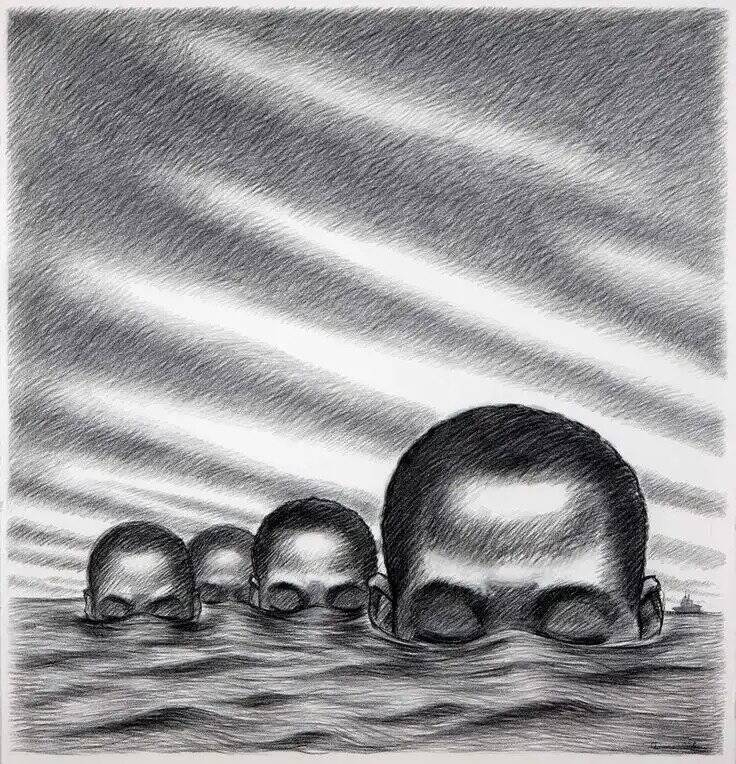 As the National Museum of African American History and Culture explains, the bodies of 13 people were later recovered from the water. Some who survived were recaptured and sold into slavery; others remained missing.

But the rebellion at Igbo Landing left an enduring mark.

The Legacy Of Igbo Landing Today 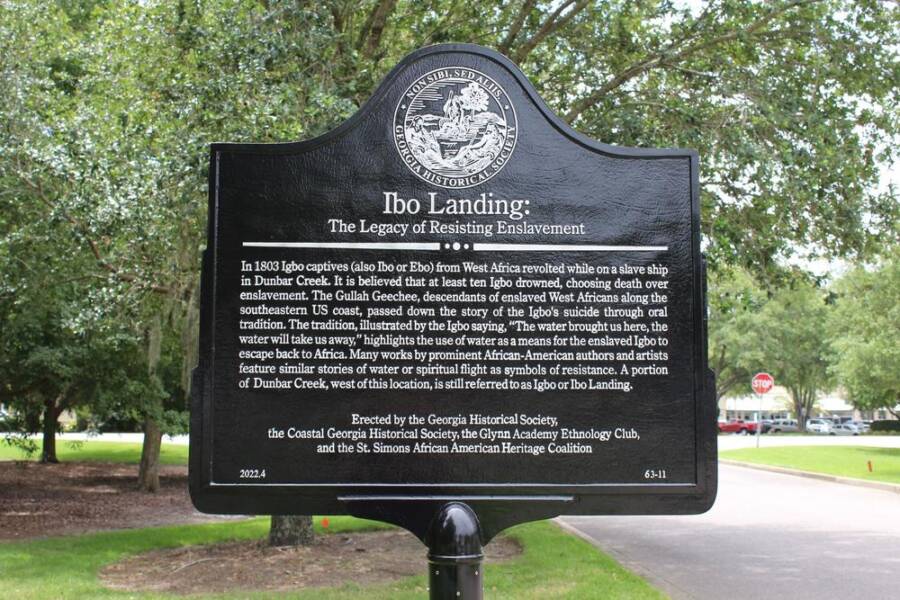 Coastal Georgia Historical SocietyA monument erected at the site of Igbo Landing in May 2022.

In the years after Igbo Landing, little about American slavery changed. But the story of the Igbo resistance spread among Black slaves.

As the New Georgia Encyclopedia writes, African-American oral tradition kept the story of Igbo Landing alive. It was passed down from generation to generation and often recalled that the Igbo captives had not died at Dunbar Creek. Instead, the story said, they flew home to Africa.

“Ain’t you heard about them?” a Black man named Wallace Quarterman responded after being asked about Igbo Landing by the Federal Writers Project in the 1930s. Quarterman proceeded to recount a version of the Igbo Landing story, in which enslaved people escaped their overseer, Mr. Blue.

“Mr. Blue, he go down one morning with a long whip for to whip them good,” Quarterman said. “Anyway, he whipped them good and they got together and stuck that hoe in the field and then… rose up in the sky and turned themselves into buzzards and flew right back to Africa… Everybody knows about them.”

Though no monument existed at Dunbar Creek until May 2022, various Black artists have commemorated Igbo Landing. Beyoncé paid homage to the legend in her “Love Drought” music video, in which she leads women into the water. And Toni Morrison wrote a version of it in her 1977 book Song of Solomon, which features a Black character taking flight in his final moments.

“The one I had always heard was about Black people, Black slaves who came to the United States, and under certain circumstances they would fly back to Africa,” Morrison said of what inspired the final scenes of her novel, according to Mother Jones.

Not everyone believes that the Igbo flew home, however. In 2016, Georgia Public Radio reports that Nigerian-born Georgia Bobby Aniewku conducted a sacred rite at the site of Igbo Landing, out of a belief that the souls of the captives were trapped in the water.

“They are still there after all these years, but never left because of the violent death,” he told Georgia Public Radio at the time. “And so [the ritual] was our equivalent of telling their soul ‘Now their souls are at peace.'”

Today, the stretch of St. Simons Island is a quiet place. Full of marshlands and beaches, it regularly draws tourists because of its golf courses and rich Southern cuisine. But for those who look closer, it’s also something else — the site of Igbo Landing, the place where dozens of Black captives chose to drown instead of being enslaved.

After reading about the rebellion of would-be slaves at Igbo Landing, discover the story of Juneteenth, the national holiday that celebrates the end of American slavery. Or, see how formerly enslaved people and abolitionists alike helped slaves escape from the South to the North on the Underground Railroad before the American Civil War.