Canada forcibly enrolled an estimated 150,000 children in these institutions. Many experienced abuse or died without their families ever being notified. 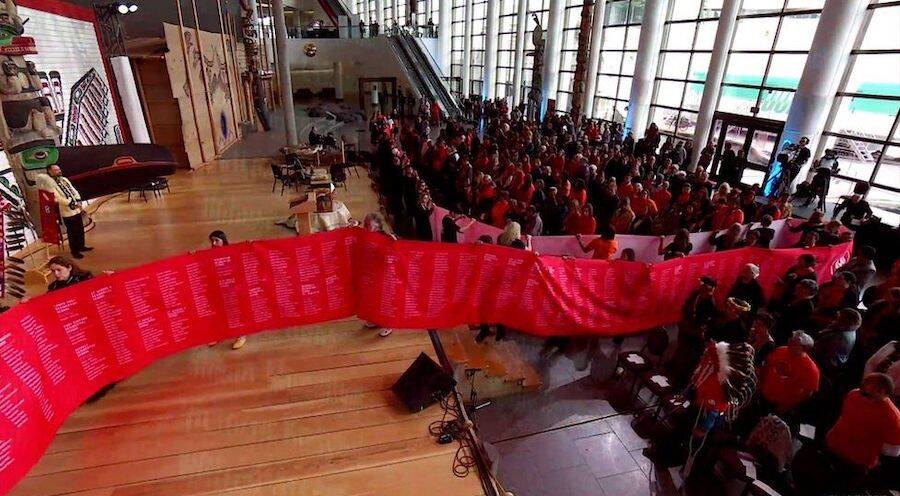 National Center for Truth and ReconciliationThis banner lists 2,800 children who died in various Canadian boarding schools during the 19th and 20th centuries. Researchers are still working on identifying 1,600 more children who were buried in unmarked graves.

For more than a century, 2,800 indigenous children who died in compulsory, government-run, Canadian boarding schools remained anonymous. Led by religious authorities, these institutions forced indigenous children to assimilate under abhorrent conditions. Mistreated, abused, and denied the right to speak in their native language, nearly 3,000 of these children were buried in unmarked graves and their families never notified.

Now, according to BBC News, these victims have finally been identified and given the memorial they deserved when the National Center for Truth and Reconciliation (NCTR) at the University of Manitoba in Winnipeg revealed a 164-foot scarlet banner that listed the names of all those 2,800 “children who never came home.”

“We’re ensuring that people know these kids,” NCTR director Ry Moran said. “Know that when we talk about the children who never came home from these schools, they were real children with real names who came from real communities with real families. This makes the gravity of what we’re dealing with, as a country, all the more real.”

The event was also organized by the Aboriginal People’s Television Network (APTN) and hosted by the Canadian Museum of History in Gatineau, Quebec.

But According to CBC News, this list of names does not even represent the total number of children who died at these schools.

“We know there’s many more to come,” added Moran. Indeed, the NCTR took nearly a decade to gather the names of these 2,800 children and still has about 1,600 more children to identify.

“We’ve got a lot of work, and importantly now, we’ve got to start working directly with communities to fill in some of those gaps.”

Coverage of Monday’s event by The Canadian Press.

According to CTV News, archivists pored through records from both governments and churches which together operated around 80 of these institutions for more than 120 years.

It’s currently estimated that 150,000 indigenous children were forcibly removed from their native homes and enrolled in these institutions. Of these enrolled students, the NCTR believes 4,200 of them died.

“Children were taken away and put into these schools absent of love and care and affection,” said Moran. “It think many of them probably passed away in quite lonely circumstances.”

The first Canadian schools of this kind opened in the 1880s and the last one closed in 1996.

As students, the children were prohibited from engaging in their cultural practices. Many were abused or routinely mistreated. Sexual abuse was prevalent, as well. An NCTR report published in 2015 described the effects of this educational policy as “cultural genocide.”

“The residential-school system was a genocide of Indigenous peoples, First Nations peoples, forcibly removing from their homes and inflicting pain,” said National Chief Perry Bellegarde of the Assembly of First Nations. “We still feel the intergenerational trauma of that genocide. We see it every day in our communities.”

Perhaps most unnerving was the discovery of just how young some of these victims were. “Infants, three-year-olds, four-year-olds all the way up through their teenage years,” said Moran. “We’ve got some students on this list that are named as ‘babies.'”

An Operation Maple segment on the history of forcible assimilation and Canada’s residential schools.

The ceremony was held this past Monday on Orange Shirt Day, a day intended to honor the indigenous children who were forced into these schools. The ceremony was organized in response to one of of the NCTR’s 94 calls to action detailed in its 2015 report. Call 72 specifically demands the esablishment of a student death registry.

Former NCTR Commission member Dr. Marie Wilson urged lawmakers to develop one such registry “that makes plain just what was the degree of the loss here.”

“These are the children of Canada who were lost because we let them out of sight and left them in harm’s way as a country,” she said. “And we did that legally by laws and policies that we put in place to make it happen.” 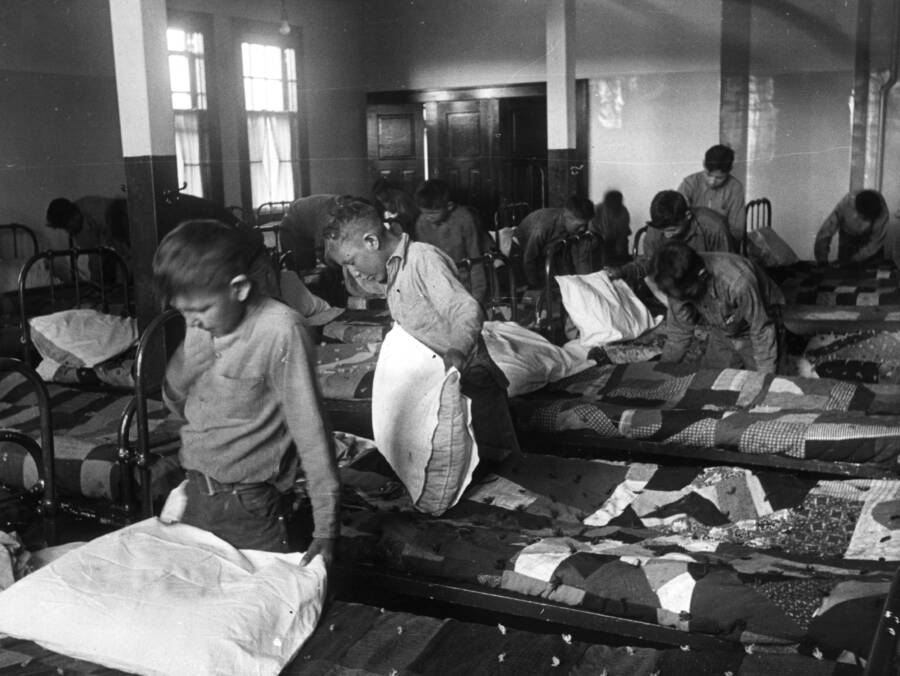 Some of those lost children were in attendance at Monday’s ceremony. Siblings Frank, Margaret, Jackie, and Eddie Pizendewatch, for instance, were sent to St. Mary’s Indian Residential School in Kenora, Ontario.

“I felt bad for the kids that didn’t come back,” said Margaret Pizendewatch.

“We couldn’t talk to each other,” said Eddie Pizendewatch, explaining the siblings created a secret, silent language to communicate. “We’d always go like that [wiggling pinky finger] secretly without the nuns looking at us or the priests,” added his sister, Jackie.

Moran confessed he was most concerned about the possibility of history repeating itself. He said, “there may very well be another day like this in 80 years, remembering the children that are dying today.”

“We live in a country that is still in the midst of a human-rights crisis, profound human-rights violations,” he said. “We’ve got to do better and we can do better and I hope that all Canadians feel that, if we get this right, we’ll be a better, stronger country.”

As it stands, Moran said researchers will continue to search for those remaining 1,600 names as well as to include as much personal information about these children as possible to the registry. The blood-red ceremonial cloth will be housed at the NCTR but organizers said it might be displayed at the Canadian Museum for Human Rights in the future.

Next, learn about the horrors of human zoos in these 37 appalling photos. Then, read about how these parents in Oregon lost custody of their children because they had low IQs.