The Disturbing Story Of Inejiro Asanuma, The Japanese Politician Who Was Stabbed To Death On Live TV

In 1960, Japanese socialist leader Inejiro Asanuma was assassinated by radical right-wing activist Otoya Yamaguchi with a samurai sword during a televised debate. 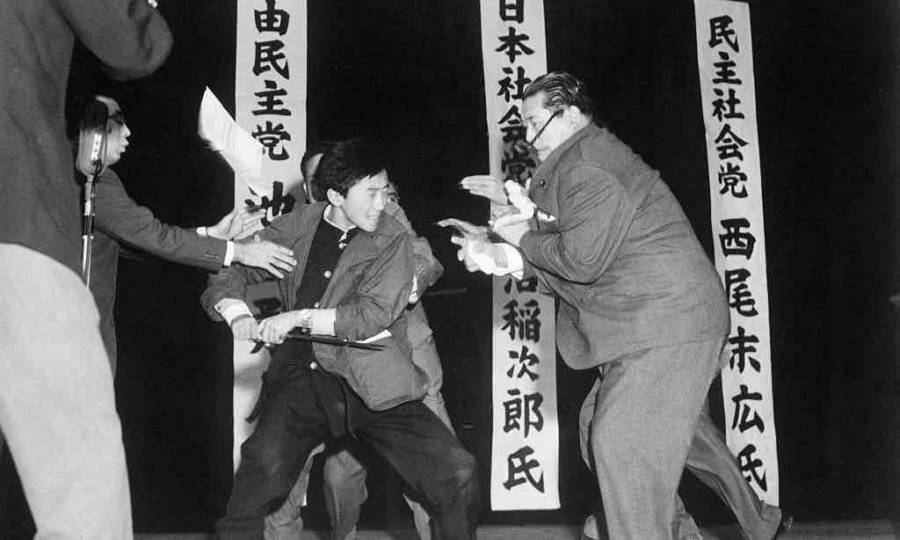 On Oct. 12, 1960, in Tokyo, a leading politician was murdered on stage during a debate by a teenager with a samurai sword. Over 1,000 people watched on in horror from the audience, and thousands more watched from their television sets at home.

The public execution came at a tense time in Japan. The country became deeply divided politically as it struggled to define itself after its defeat in World War II, and a looming election for the House of Representatives only emphasized this inner turmoil.

The politician who was stabbed was Inejiro Asanuma, the leader of Japan’s Socialist Party, whose support for the Chinese Communist Party and criticism of the U.S were considered extremely controversial ideas. His position was made even more delicate by the fact that he allegedly had once opposed everything he now stood for.

Perhaps that’s how he came to meet this grisly end. 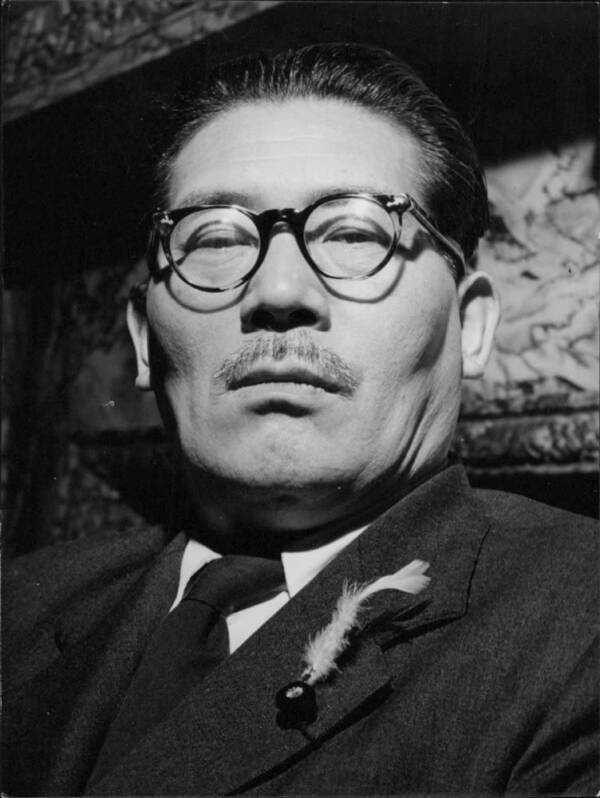 Public DomainInejiro Asanuma became disillusioned with the Japanese government as it was following World War II and became a socialist.

Inejiro Asanuma was born in Tokyo in 1898 and was raised by his father as his mother had died in childbirth. He was then orphaned several years later when his father died of cancer.

It was a difficult beginning, but those who knew Asanuma said he never slowed down. He was loud and determined, but beneath a forceful exterior, he was gentle — a combination of traits that made him popular when he turned his full attention to politics in his 30s.

According to Famous Assassinations in World History by Michael Newton, Asanuma didn’t start out a socialist; in fact, he started about as far away on the political spectrum as it was possible to be. He became a member of what the Japanese call uyoku dantai: ultranationalist, pro-military, far-right factions.

Though political convictions vary from group to group, most uyoku dantai are united by their reverence for traditional Japanese values and their staunch opposition to Marxism and communism.

In 1936, Asanuma was elected to the Lower House of the country’s legislative body known as the National Diet, where he represented right-wing interests for six years. 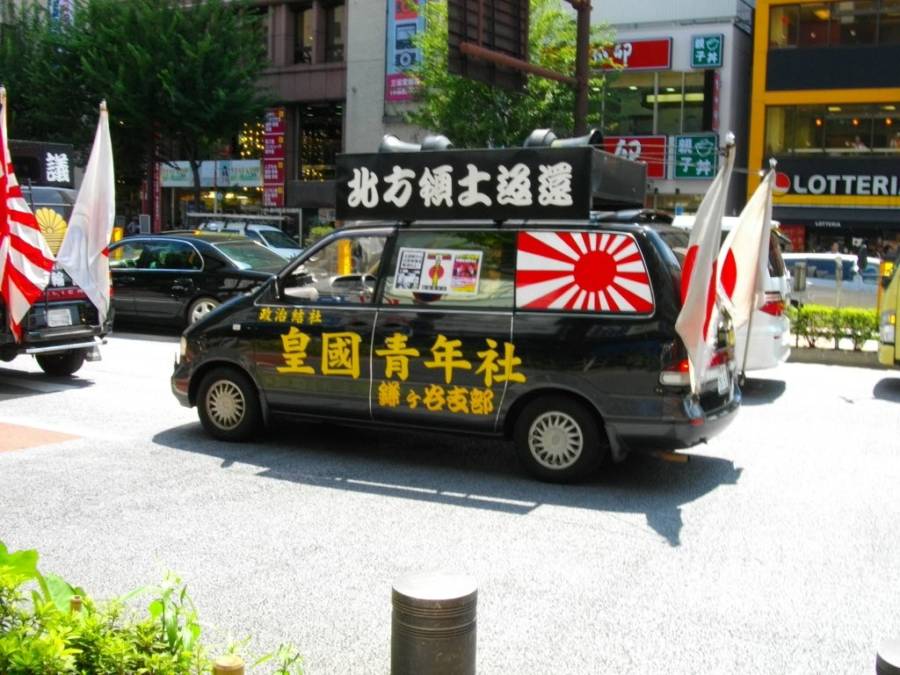 Wikimedia CommonsToday, uyoku dantai vans splashed with right-wing slogans and propaganda pictures can often be spotted at Japanese political events and protests, blasting their message over their loudspeakers.

Like most members of uyoku dantai, Asanuma supported the military regime of Hideki Tojo, the 27th prime minister of Japan and general of the Imperial Japanese Army during World War II. Tojo is primarily known for having ordered the 1941 bombing of Pearl Harbor, provoking the U.S. into entering World War II.

But in 1942, he began to have doubts. Disillusioned by Japan’s military defeat in the war, he questioned his support for his nation’s military aggression.

When it came time to fight once more for reelection, he chose instead to withdraw his candidacy for the National Diet. 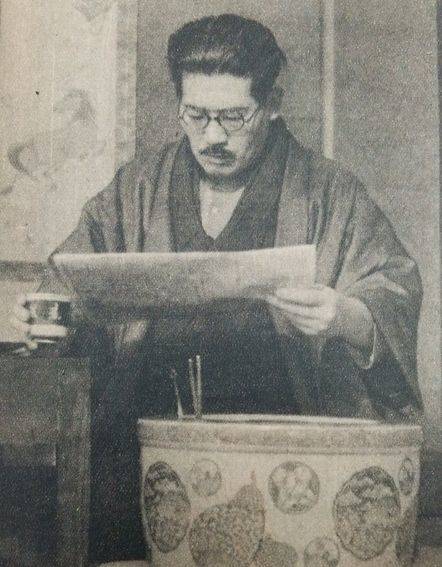 By the time of Japan’s defeat in 1945, Asanuma was ready to reenter politics — but this time from a new angle. He ran as a socialist.

It was a dramatic pivot from the far right to the far left. Asanuma served as Japan’s Socialist Party chief secretary for 11 years, but when the party split into factions, he joined its right-wing element and served as mediator among members of the formerly united party.

In 1959, he visited China and referred to the United States as “the shared enemy of China and Japan.” He then disembarked from the plane home wearing a suit styled after Chairman Mao Zedong — a bold fashion choice at a time when Mao’s People’s Republic of China was not recognized as legitimate in Japan. 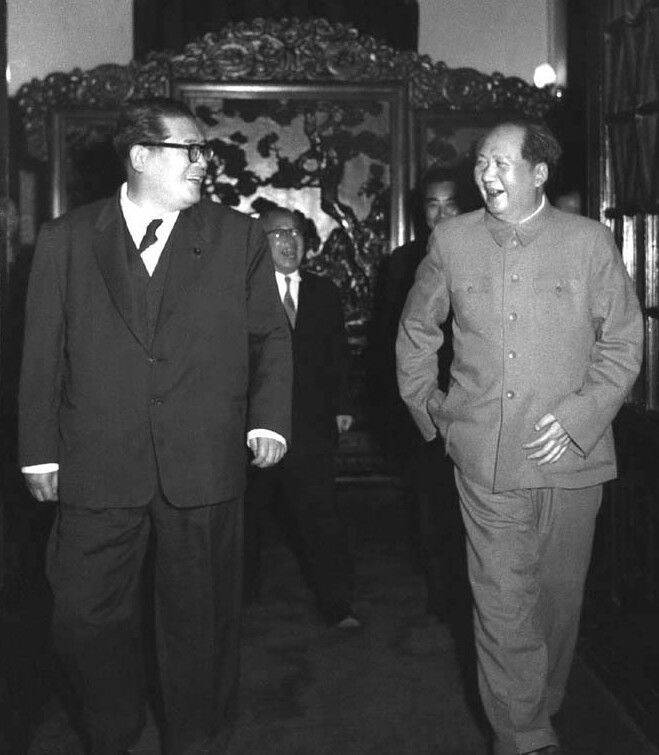 So when Asanuma assumed the lectern in Hibiya Hall in front of 1,000 people on Oct. 12, 1960, it was assumed that some of the crowd would have strong feelings on his candidacy.

Spectators were still shocked, though, when 17-year-old Otoya Yamaguchi rushed onto the stage with a traditional samurai sword and plunged it into the left side of the 61-year-old’s ribs.

Watch as Otoya Yamaguchi stabs Inejiro Asanuma with a foot-long sword during a televised debate.

Yamaguchi was tackled before he got in a second stab, but the damage was already done. Inejiro Asanuma died an hour later.

Still wearing his school uniform, the young ultranationalist smiled as police hauled him away.

Yamaguchi had been a member of the Great Japan Patriotic Society — an uyoku dantai not unlike the one that Inejiro Asanuma himself had once belonged to. But Yamaguchi vehemently opposed both communism and Westernization. Approximately 100 members of his organization had attended the debate and could be heard heckling Asanuma throughout his speech.

Yamaguchi’s devotion to Japanese culture was evident in his weapon of choice — a foot-long yoroidoshi sword traditionally used by samurais in the 1800s.

The Aftermath Of Asanuma’s Assassination 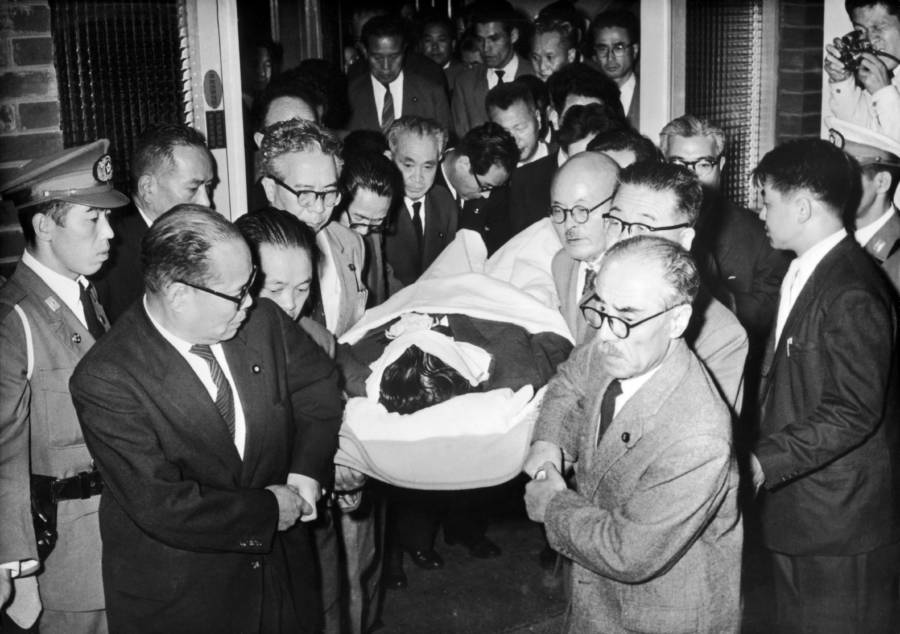 After Asanuma was pronounced dead, an estimated 15,000 left-wing protestors converged on the city’s police headquarters demanding that the police chief resign for his failure to provide adequate security.

During the resulting unrest, 60 students and 22 policemen were injured.

Socialists were quick to characterize Yamaguchi as a “cat’s paw of monopolistic capitalist forces.”

The newspaper Yomiuri questioned why there weren’t more guards stationed during the debate and how much responsibility the NHK, a Japanese broadcasting corporation, bore for Asanuma’s assassination since it had sponsored the event.

As the footage of the incident spread — watched by millions in the days following the attack — the political effects were felt around the world.

“Privately, officials said that while Mr. Asanuma was an avowed enemy of the United States, no responsible American wanted him removed from the political scene in this way,” The Guardian reported. “Now it is feared in Washington that Mr. Asanuma’s viewpoint, as well as his person, has been martyred in a way which may strengthen the emotional appeal of his views.”

Yamaguchi became a martyr as well. Three weeks after the assassination, he squeezed out some toothpaste in his juvenile detention cell. He mixed it with water and wrote a tribute to the samurai Kusunoki Masashige: “Seven lives for my country. Long live His Imperial Majesty, the Emperor!” 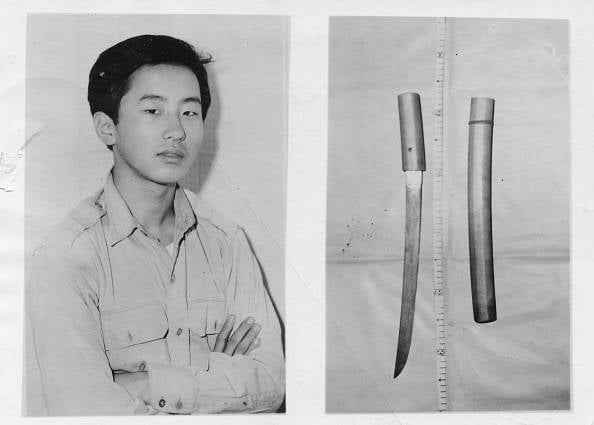 Yamaguchi then tore and knotted his bedsheets and hung himself in his small prison cell.

In the wake of his death, the new head of Asanuma’s party Saburo Eda stated, “The fact that an important criminal was able to commit suicide exposes the utter irresponsibility of the authorities in charge.”

Uyoku dantai members, believing Yamaguchi to be a martyr for their cause, presented his parents with an honorary belt, kimono, and burial coat before escorting the assassin’s remains to a memorial service.

On the 58th anniversary of the assassination, Gavin McInnes — the co-founder of Vice and more infamously the founder of the Proud Boys, a right-wing group fond of espousing white nationalist rhetoric — commemorated Asanuma’s assassination through reenactment.

McInnes played the role of Yamaguchi with a plastic samurai sword at the Metropolitan Republican Club in Manhattan. McInnes later posted an image of Asanuma’s slaying along with text that read: “Believe in something. Even if it means sacrificing everything. Just do it.”

The image was taken by Yasushi Nagao, who, after instinctively changing the focus from 10 to 15 feet as Yamaguchi rushed the stage, snapped the photo on his last unexposed negative. He was awarded the World Press Photo Award and the Pulitzer Prize for photography in 1961.

After this look at the assassination of Inejiro Asanuma, check out the four strangest presidential assassination attempts in U.S. history. Then, discover the story of R. Budd Dwyer, the American politician who killed himself while cameras were rolling.