The Story Of Mary Surratt, The Lincoln Assassination Conspirator Who Became The First Woman Ever Hanged By The U.S. Government

Mary Surratt hosted meetings for the men who plotted Abraham Lincoln's murder at her boarding house in Washington, D.C. — and even stored weapons for John Wilkes Booth at her tavern. 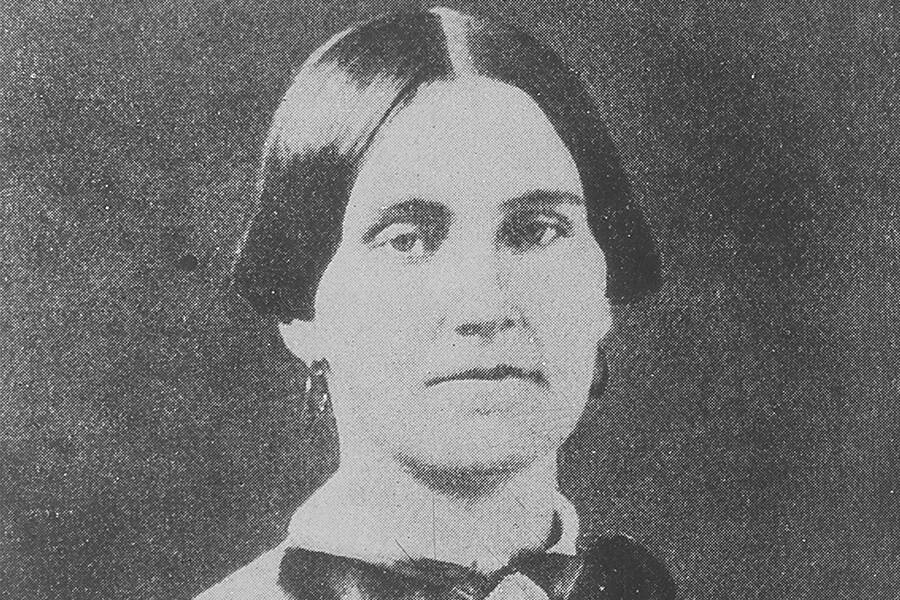 Public DomainDespite unwaveringly declaring her innocence along with the support of several priests, Mary Surratt was sentenced to death.

On July 7, 1865, Mary Surratt and three other condemned prisoners were marched through the courtyard of the Old Arsenal Penitentiary outside of Washington, D.C., surrounded by a crowd of over 1,000 people. Escorted by General John F. Hartranft, each of the prisoners’ wrists and ankles were bound. Their heads hung low as they approached the gallows.

Surratt marched at the front of the procession wearing a black dress, bonnet, and veil. Too weak to walk on her own, two soldiers and priests supported her as she walked.

The prisoners took their seats on the gallows — Surratt sat to the left of the others, the “seat of honor” for the execution. Then, one of the other prisoners spoke up.

“Mrs. Surratt is innocent,” he said. “She doesn’t deserve to die with the rest of us.”

Or, at least, most of them were.

While Powell, Herold, and Atzerodt were most certainly involved in planning Lincoln’s death, Mary Surratt’s participation is much less clear. And for many Americans, the sight of her dead body hanging in distinct contrast to the men next to her was too much to bear.

So who was Mary Surratt? And why did her death lead to so much controversy?

Born Mary Elizabeth Jenkins to a tobacco farmer and his wife in Maryland, Mary Surratt grew up in a slave-owning family. When she was 17, she married John Harrison Surratt, another farmer who enslaved seven people of his own. Like many Maryland farmers who relied on slave labor, John Surratt openly favored Southern secession.

After a fire burned down the Surratts’ farm — reportedly set ablaze by a runaway slave, according to Time — John and Mary opened a tavern in Clinton, Maryland, which also served as their home. However, within a few years, John Surratt, an alcoholic, fell into heavy debt. 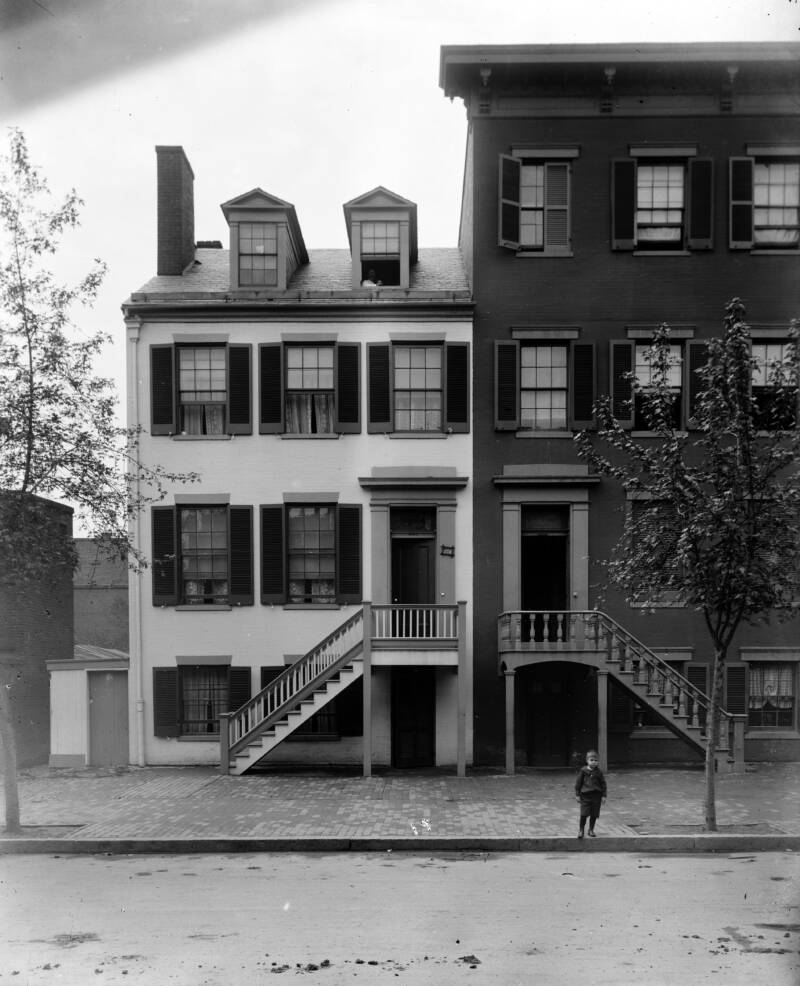 Maryland was a pivotal state in the North-South conflict — only two percent of voters favored Lincoln, yet the state remained part of the Union when the Civil War broke out.

Then in 1862, John Surratt died, leaving Mary in dire straits. At 39, she decided to rent out the family’s Maryland farm and tavern and moved with her two sons and daughter, Anna, to a small townhouse she had inherited in Washington, D.C.

Mary converted the home’s upper floor into a small boarding house, which she could rent out and make a modest living through.

However, during her trial, Mary Surratt’s boarding house ultimately proved to be the nail in the coffin.

Her son John had become good friends with a prominent Southern actor, a man named John Wilkes Booth, and the two would often meet at the boarding house.

In time, Mary’s boarding house — located less than a mile down the street from the White House — became a safe house for Confederate rebel agents and spies. More importantly, it is where Booth and his co-conspirators formulated the plan to kidnap Abraham Lincoln late in the Civil War.

But that plan changed when the Union prevailed over the Confederacy in April 1865.

The Assassination Of Abraham Lincoln

According to History, John Wilkes Booth’s original plan had been to abduct Abraham Lincoln and transport him to Richmond, offering him in exchange for Confederate prisoners of war.

While planning the kidnapping, Booth and John Surratt Jr. recruited more co-conspirators and hosted meetings at Mary Surratt’s boarding house. They also stored guns and ammunition at her tavern in Maryland. 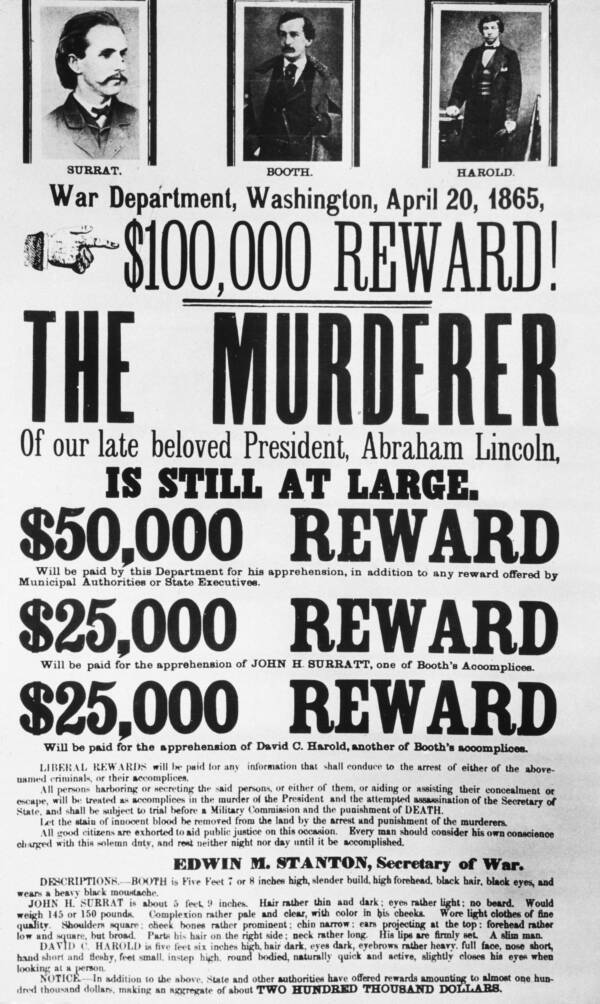 But with the surrender of the Confederacy on April 9, 1865, Booth and his conspirators hastily changed their plan from kidnapping to assassination.

Booth would assassinate Lincoln, George Atzerodt would kill his Vice President Andrew Johnson, and Lewis Powell and David Herold would kill Secretary of State William H. Seward. Together, they hoped to cripple the U.S. government just as it celebrated victory.

Five days later, only John Wilkes Booth was successful. Yet within hours of his assassination of Abraham Lincoln at Ford’s Theatre on April 14, 1865, District of Columbia police visited Mary Surratt at her boarding house.

They explained that, in addition to looking for Booth, they were also looking for her son John, who was suspected of assisting Powell and Herold in the attack on Seward.

But while Booth fled to Surratt’s Maryland tavern to collect weapons before heading south into Virginia and ultimately being killed by Union soldiers, John fled to Canada. From there, he journeyed to Europe and posed as a Canadian citizen, joining the Papal Zouaves, a volunteer regiment set up to defend the Vatican during Italian unification.

U.S. officials eventually caught up with him in Egypt, but John Surratt Jr. avoided the gallows. Unfortunately, the same could not be said for his mother.

Historians described Surratt’s responses during her questioning as “confident and arrogant.” She denied having any prior knowledge of the assassination, though some historians argue that she did, at least, know about the plan to kidnap Lincoln.

Still, it had been her boarding house where the meetings were held.

On top of that, her Maryland tavern keeper, John Lloyd, claimed that Mary Surratt had told him the day of the assassination to keep guns ready for Booth and Herold, who were meant to rendezvous there after the killings.

Combined, Lloyd’s damning claim and Mary’s status as the conspirators’ landlord led to her arrest and placed her on trial alongside Atzerodt, Herold, and Powell.

On May 12, 1865, Mary Surratt stood trial before a nine-man military tribunal rather than a civil court, according to the Journal of the Abraham Lincoln Association. The tribunal itself was controversial at the time — likely because the North and South still strongly distrusted one another.

Surratt proclaimed her innocence throughout the proceedings, and several friends and priests defended her. Among her biggest supporters was her daughter, Anna. 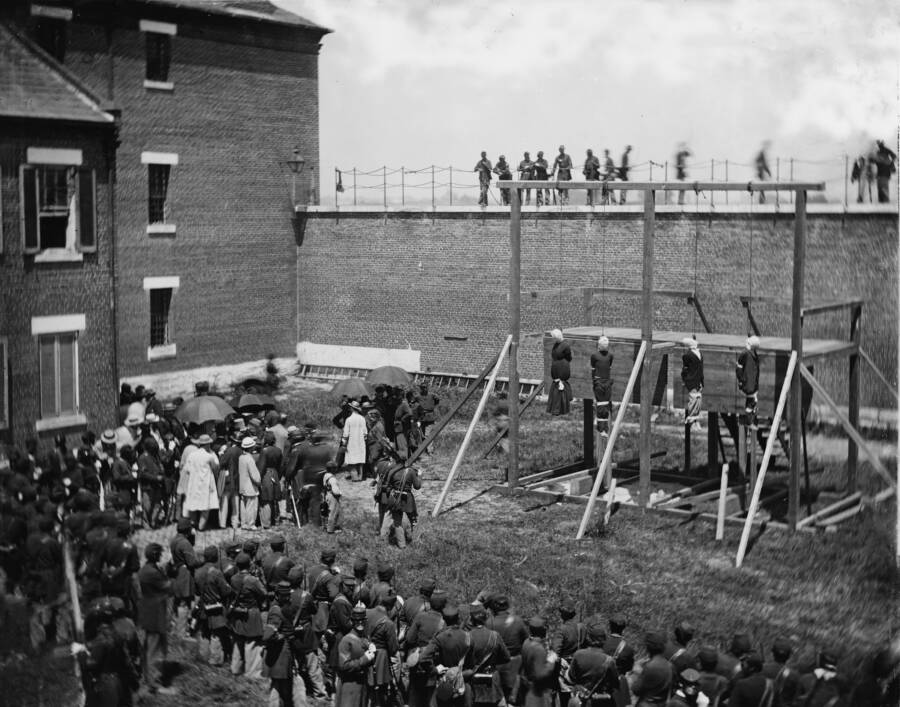 Bettmann/Getty ImagesMary Surratt wore a black veil over her face throughout the tribunal and refused breakfast on the day she was to be hanged.

But other witness testimonies didn’t paint Mary Surratt in a favorable light. One witness described her as “devoted body and soul to the cause of the South.” And of course, there was the testimony of John Lloyd, the man to whom she leased the Maryland tavern, who told the tribunal of weapons that had been stored there for the conspirators.

Reportedly, when Lloyd learned of Lincoln’s assassination, he called out, “Mrs. Surratt, that vile woman, she has ruined me!”

In the end, the tribunal ignored Mary Surratt’s protestations of innocence. Not only was she convicted of helping to plot the assassination, but she was also sentenced to death by hanging.

However, of the nine tribunal members, five suggested that President Andrew Johnson should commute Surratt’s sentence to life in prison. Anna even pleaded on the front lawn of the White House, begging Johnson to commute her mother’s sentence.

Some accounts claim that Johnson never received the letter asking him to commute Surratt’s sentence — presumably, he didn’t see Anna pleading on the White House lawn, either — but others say he outright refused, saying, “She kept the nest that hatched the egg.”

Many people, including the hangman, had expected Andrew Johnson to commute Surratt’s sentence at the last minute. Instead, he signed her execution order on July 5. That same day, workers began constructing the gallows.

Dressed in black on July 7, 1865, Mary Surratt became the first woman to be hanged by the United States government.

Inside The Complicated Legacy Of Mary Surratt

During the trial, the general public regarded Mary Surratt with contempt. A writer for The Chicago Tribune in attendance at the tribunal wrote of her, “This miserable creature is looking stronger and apparently more reconciled.”

The vitriol was so intense that the Tribune‘s editors seemed to be eagerly awaiting the capture and execution of John Surratt Jr. as well, writing, “One of them has been hanged, and the other will be hanged when he gets his desserts.” 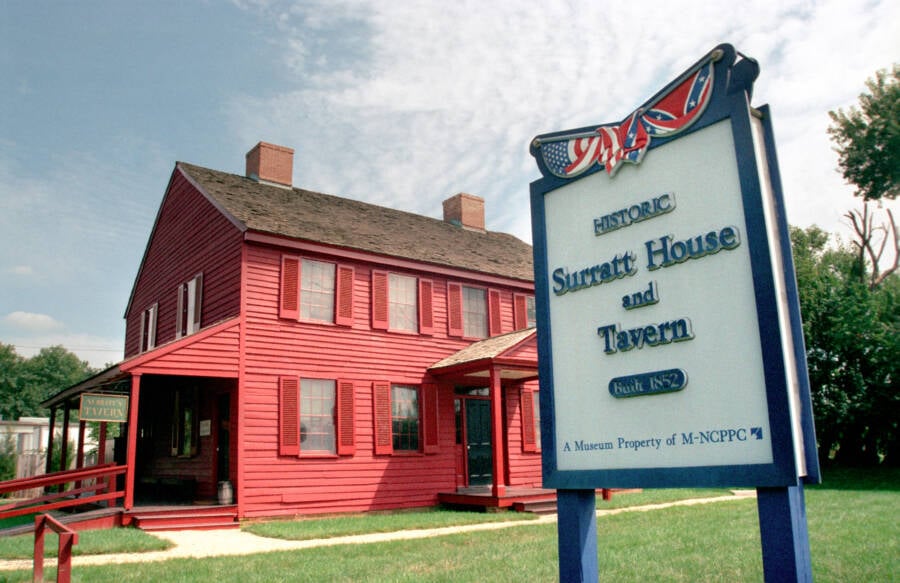 The Washington Post via Getty ImagesSome believe Mary Surratt’s ghost still haunts the old Surratt House and Tavern in Maryland, where John Wilkes Booth briefly stopped to pick up a rifle and ammunition along his escape after assassinating Abraham Lincoln.

But after the execution — and especially after seeing the photo of her hanging at the gallows — many Americans questioned whether the verdict had been just. Indeed, in the more than 150 years since, Mary Surratt’s involvement in the assassination plot has repeatedly come into question.

In the years immediately following Surratt’s execution, capital punishment for women plummeted dramatically. Less than a year later, in April 1866, the Supreme Court ruled it unconstitutional for citizens to be tried before military commissions — a ruling that ultimately saved John Surratt Jr.’s life.

The Surratt House and Tavern still stands to this day as the oldest house in Clinton, Maryland, where it is being maintained by The Surratt Society as a museum and historical landmark.

However, Mary Surratt’s boarding house in Washington, D.C., is a different story. While the building is still intact, it is now a Chinese restaurant called Wok and Roll.

While Mary Surratt’s legacy has lived on, history still has yet to decide her final verdict.

After learning about Mary Surratt and her potential involvement in Abraham Lincoln’s assassination, find out more about her co-conspirator son, John Surratt, and how he escaped justice. Then, read about Mary Bowser, the formerly enslaved woman who helped to take down the Confederacy.