After John Wilkes Booth killed Abraham Lincoln, Union soldier Thomas "Boston" Corbett was sent to Virginia with orders to capture Booth alive. He shot and killed him instead. 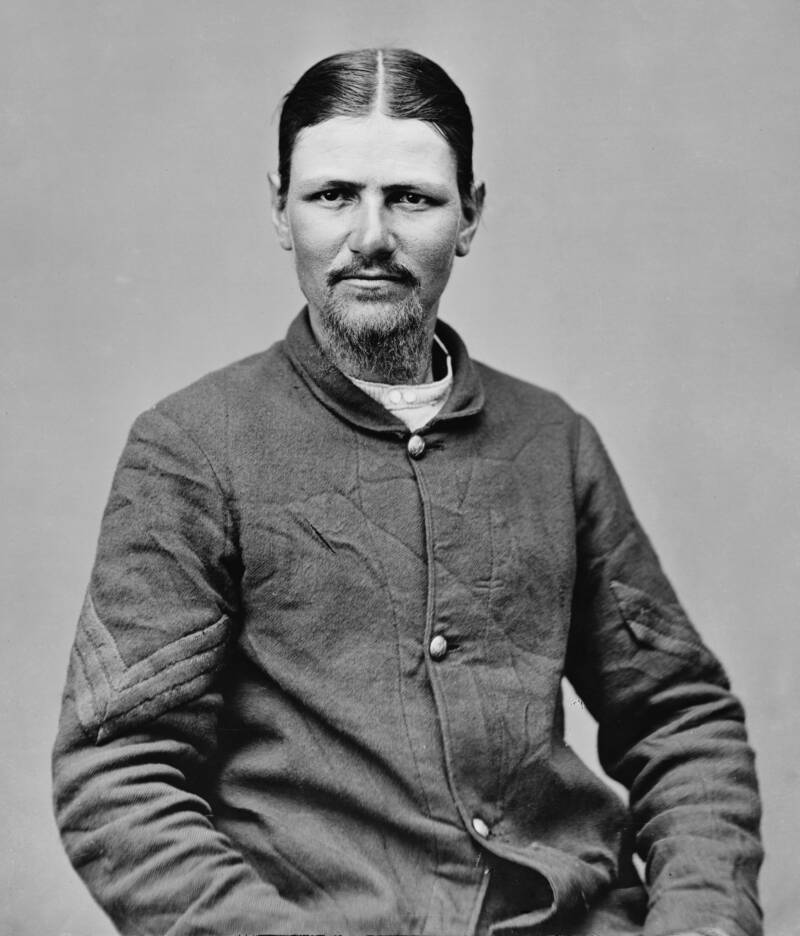 Library of CongressThomas H. “Boston” Corbett, the soldier who shot John Wilkes Booth and became a hero to the Union.

The American Civil War was an extraordinary time when ordinary people were thrust into the forefront of history, but one Civil War figure, the eccentric Thomas “Boston” Corbett, was anything but ordinary.

A fiery preacher, a brave soldier, and a passionate enemy of slavery, Corbett made his mark on history with his fateful decision to shoot John Wilkes Booth, the reviled assassin of Abraham Lincoln.

Meet the man who became legendary as “Lincoln’s Avenger.”

The Early Life Of Thomas Corbett 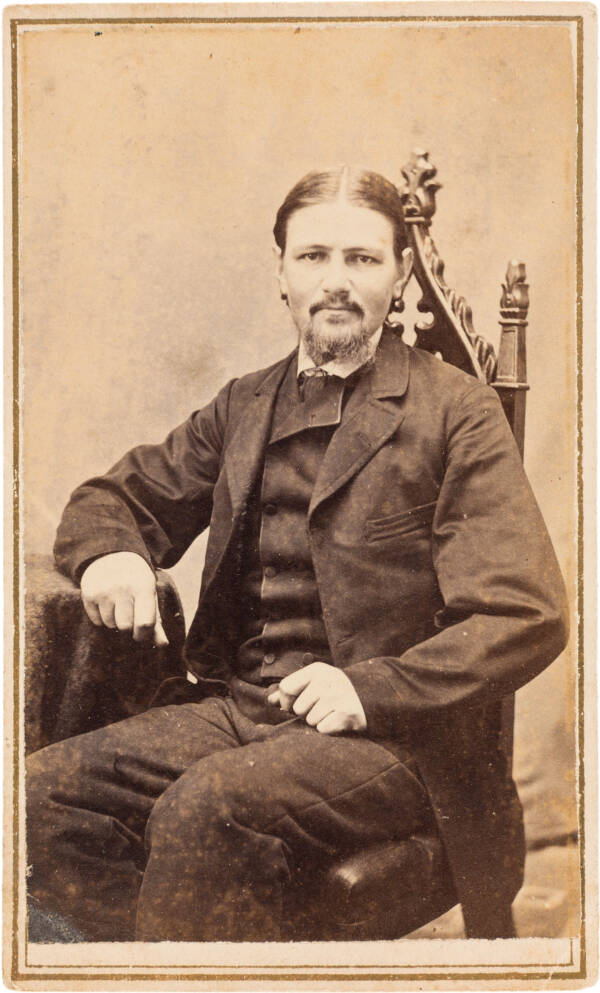 Born in London in 1832, Thomas H. Corbett’s family moved to New York when he was seven. There he apprenticed as a hat-maker, which exposed him to the mercury used to make felt from fur.

Mercury poisoning often resulted in “hatters’ shakes,” characterized by trembling, nervousness, and psychotic episodes. These same symptoms would trouble Corbett throughout his life.

His work took him to many cities, including the future Confederate capital of Richmond, Virginia, which he left when his abolitionist views irritated slaveholders.

Corbett married young in New York City, and when his wife died while giving birth to their stillborn daughter, he was devastated. He lapsed into an alcoholic depression and drifted homeless through the streets of Boston.

Becoming “The Glory To God Man” 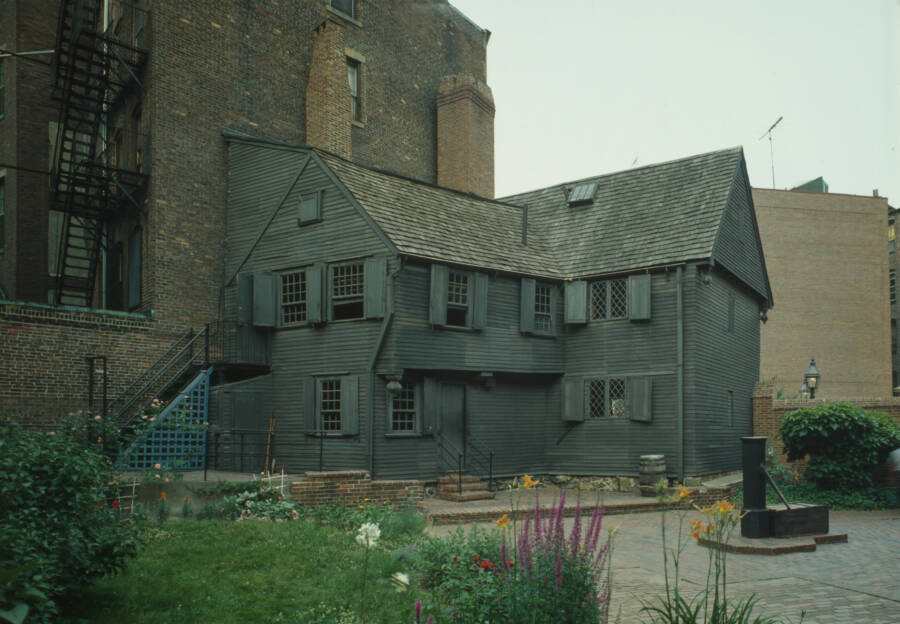 Library of CongressCorbett spent his spare time preaching in Boston’s North Square after his conversion, near the Paul Revere House.

In Boston in the 1850s, Corbett found salvation when he encountered a streetside evangelist. He was enthralled by Christianity, and after converting he renamed himself “Boston” in honor of the city where he was baptized.

He gave up drinking and returned to work. Corbett’s wild preaching and shouts of “Glory to God!” gained him the nickname “the Glory to God man.”

In 1858, a bizarre incident occurred which marked his peculiar devotion to his religion: Walking home from a prayer meeting, he was disturbed when propositioned by two prostitutes.

He consoled himself by reading the Gospel of Matthew, where he must have spotted the words “there be eunuchs, which have made themselves eunuchs for the kingdom of heaven’s sake.”

Taking a pair of scissors, he removed his own testicles before eating a hearty dinner, going for a walk, and attending another prayer meeting. Only later did he see a doctor.

As odd as he was, Boston was a principled man, which sometimes brought him trouble. His combative nature frequently cost him jobs, and he shared so much of his earnings with the poor that he often couldn’t afford food.

But he was soon presented with his greatest opportunity to fight for his beliefs. 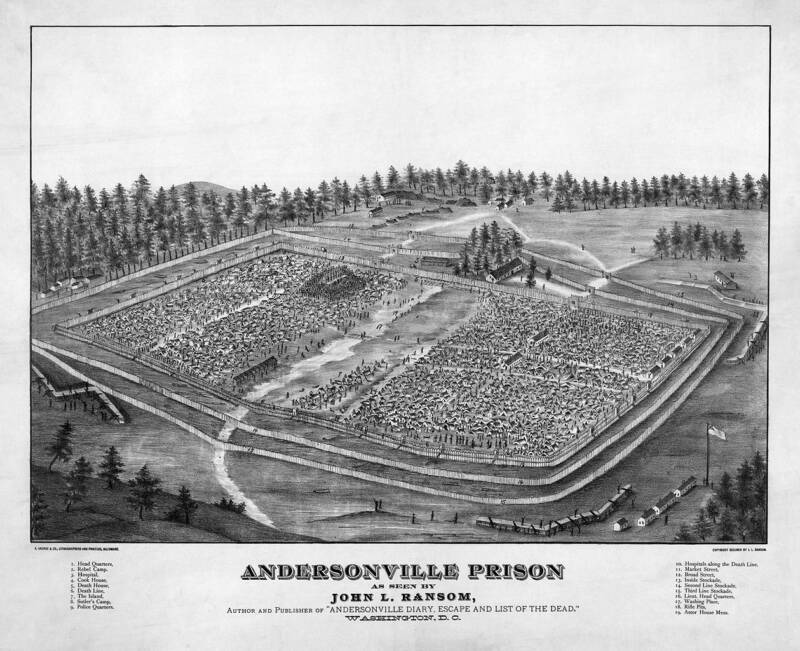 Library of CongressA bird’s eye view of Andersonville Prison in Georgia, where Corbett was imprisoned in 1864. Disease, abuse, and gang violence abounded.

When the Civil War broke out in 1861, Boston Corbett was one of the first to enlist in New York’s 12th Regiment of Militia. At five feet, four inches tall, Corbett didn’t appear to be an ideal soldier, but he made up for his stature with enthusiasm and ability.

He frequently chafed under military authority; he was forced to cut the black hair which he wore long in imitation of Jesus but refused to refrain from breaking out into loud preaching while in the ranks.

Eventually, his insubordination toward a senior officer saw him court-martialed and sentenced to death, but he was discharged instead. He immediately re-enlisted with Company L, 16th New York Cavalry Regiment.

Despite his disdain for military discipline, Corbett was exceptionally brave. After facing down John S. Mosby’s elite cavalry corps single-handedly in Culpeper, Virginia, he was captured and thrown into the notorious Confederate-run Andersonville Prison in Georgia.

Amid Andersonville’s squalid conditions, 45,000 men were held captive, and nearly one-third of them died. Corbett uplifted the spirits of his fellow prisoners of war with his powerful preaching and willingness to sacrifice food, water, and clothing for those in need.

Upon release in November 1864, Corbett returned to his regiment in Washington as a sergeant.

The Lincoln Assassination And The Manhunt For Booth 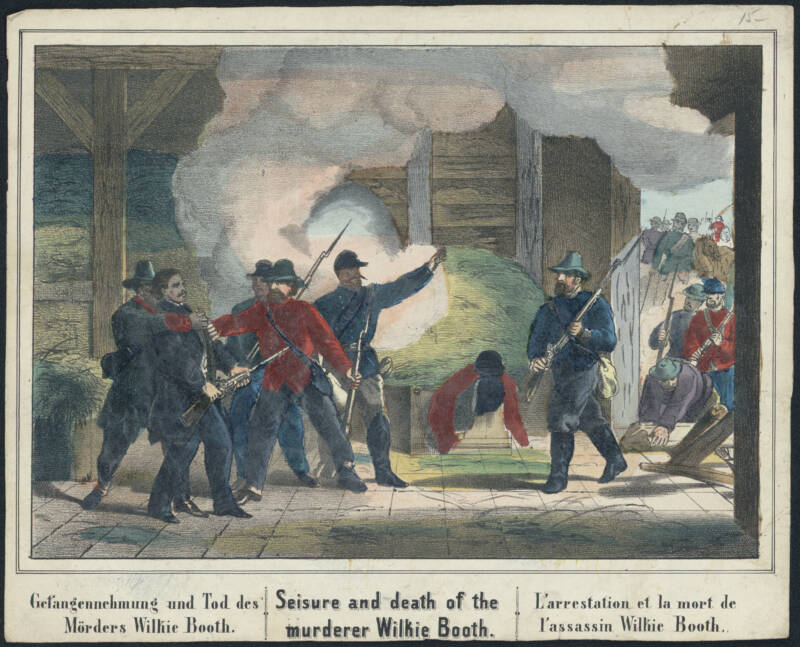 Library of CongressCorbett’s shooting of John Wilkes Booth electrified the North and became known throughout Europe and North America, making him an instant hero.

On April 15, 1865, Boston Corbett was in garrison when orders came from Secretary of War Edwin M. Stanton for a detachment of troops from the 16th under Lieutenant Edward P. Doherty.

Lincoln’s murderer, Confederate sympathizer and actor John Wilkes Booth, had fled into Virginia. The men of Company L were to capture him alive for interrogation and public execution.

After a 12-day chase, the soldiers surrounded Booth in a Port Royal tobacco barn. After attempting to convince the assassin to surrender himself, they set fire to the barn. There was no way to capture Booth without bloodshed, but Stanton was adamant about taking the murderer alive. 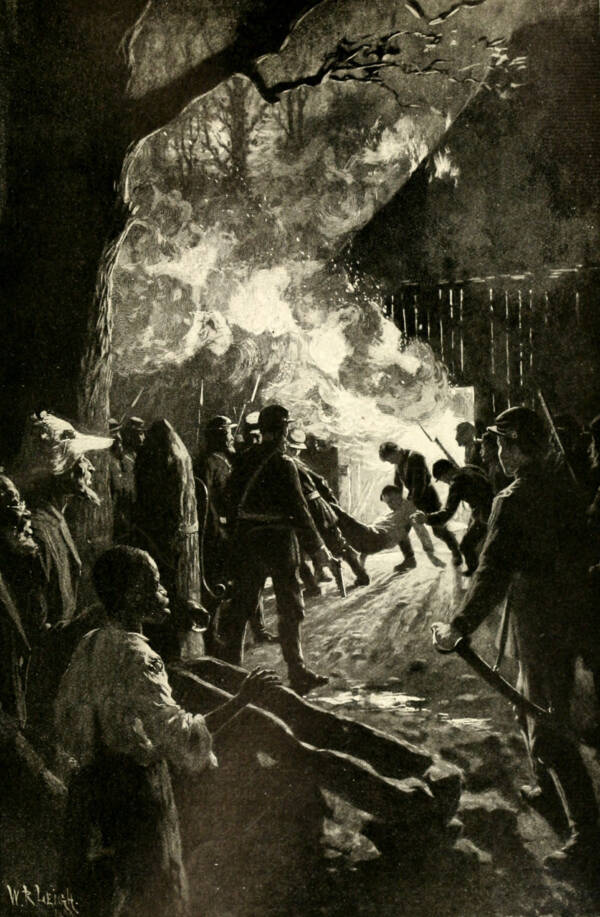 Meanwhile, Corbett had sneaked unseen up to the side of the barn. He later described the scene:

“Finding the fire gaining upon him, [Booth] turned to the other side of the barn and got towards where the door was; and, as he got there, I saw him make a movement towards the floor. I supposed he was going to fight his way out. One of the men who was watching told me that [Booth] aimed his carbine at him. He was taking aim with the carbine, but at whom I could not say. My mind was upon him attentively to see that he did no harm; and, when I became impressed that it was time, I shot him. I took steady aim on my arm, and shot him through a large crack in the barn.”

Paralyzed, Booth was laid out on the nearby farmhouse porch. He asked for his hands to be raised to his eyes. Staring at them, he whispered “Useless, useless.” At dawn on April 26, Lincoln’s killer breathed his last. 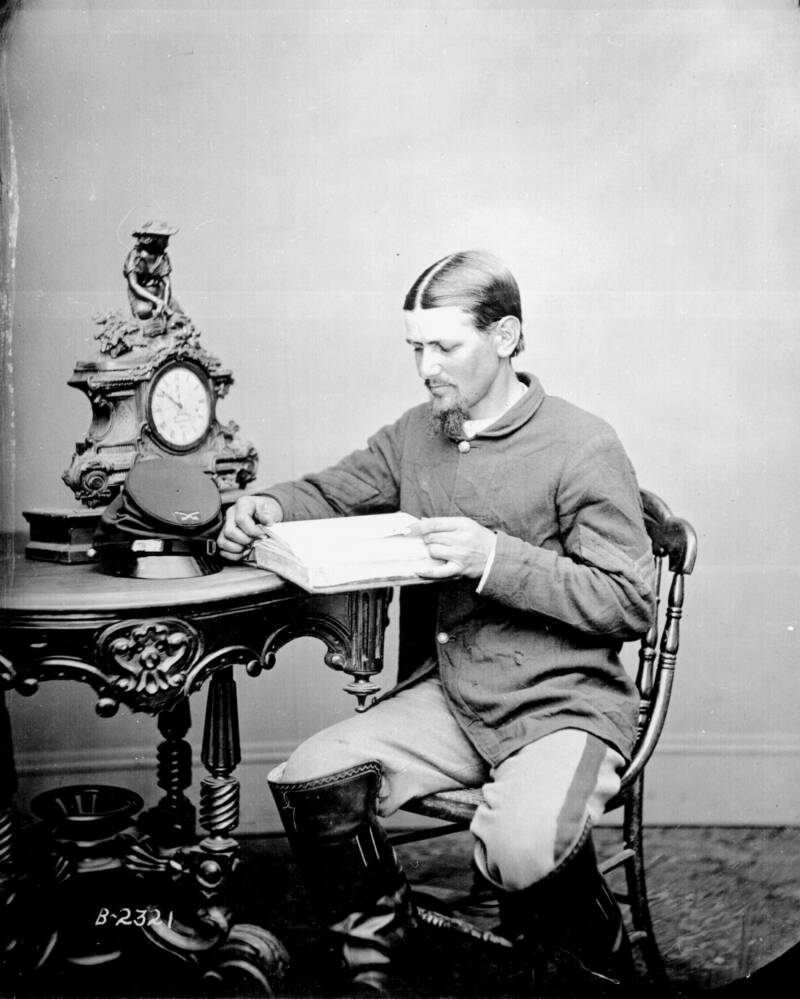 Wikimedia CommonsBoston Corbett never knew peace in his later life, troubled by his own paranoia and repeated death threats from Confederate sympathizers. He spent every night after the manhunt with a loaded pistol under his pillow.

Stanton and other senior officials were furious with Corbett, and he was initially arrested for disobeying orders. However, with his reputation as an excellent soldier, he appeared to have done exactly what was necessary to protect his men so he was released back in Boston.

He was celebrated as “Lincoln’s Avenger,” but Corbett insisted that “God avenged Abraham Lincoln’s death.”

Skepticism about Corbett’s version of events lingered, however: None of the other soldiers had seen Corbett aim at Booth or heard the shot. While Corbett had been issued a carbine pistol, an autopsy revealed that Booth had been killed by a “conoidal pistol ball” used in revolvers.

Booth had two revolvers on his person at the time of the shooting, and it is very possible that his death was the result of suicide.

Though Corbett was still widely acknowledged as the man who shot Booth, his erratic behavior continued. He resumed working as a hatter in Boston and later in Danbury, Connecticut and in New Jersey. However, his habitual wild preaching and gun-waving made it difficult to hold down a steady job.

Additionally, Corbett was paranoid that former Confederate-supporters might take their revenge on him, and he reportedly slept with a loaded pistol under his pillow every night.

In 1878, Corbett drifted west, where he worked as a farmer and doorkeeper for the Kansas House of Representatives. After chasing Kansas officials out of the capitol building in an 1888 psychotic episode, he was thrown into a mental hospital, but escaped on horseback and disappeared into the north.

It’s said Corbett escaped the mental hospital after spending a year there, disappearing into Mexico, never to be seen again, or that he died in the Great Hinckley Fire of 1897 in Pine County, Minnesota.

Although his ultimate fate is uncertain, Corbett will forever be remembered by the American public as the man who avenged the Union. His fame was so great that even into the 20th century, imposters still used his name in an attempt to capture the glory of Lincoln’s Avenger.

After learning about Boston Corbett, read these 33 interesting facts about Abraham Lincoln. Then learn about the sordid affairs of assassin John Wilkes Booth.