Mary Todd Lincoln led a tragic life. She suffered the deaths of her mother, three of her children, and her husband. Today, she also suffers from history's cold gaze.

As the Civil War drew to a close on April 14, 1865, Mary Todd Lincoln, Abraham Lincoln’s wife, scolded her husband for being overly affectionate. Lincoln told his wife that the others in their box at Ford’s Theatre would think nothing of it.

Minutes later, a bullet pierced the president’s brain. He died the next morning.

The assassination of Abraham Lincoln emotionally destroyed his wife. But her husband’s violent death was not the first terrible thing to happen to Mary Todd Lincoln — and unfortunately, it would not be the last. But perhaps no woman as resilient, bright, and cunning as Mary Todd Lincoln, was better suited to brave such difficult times. 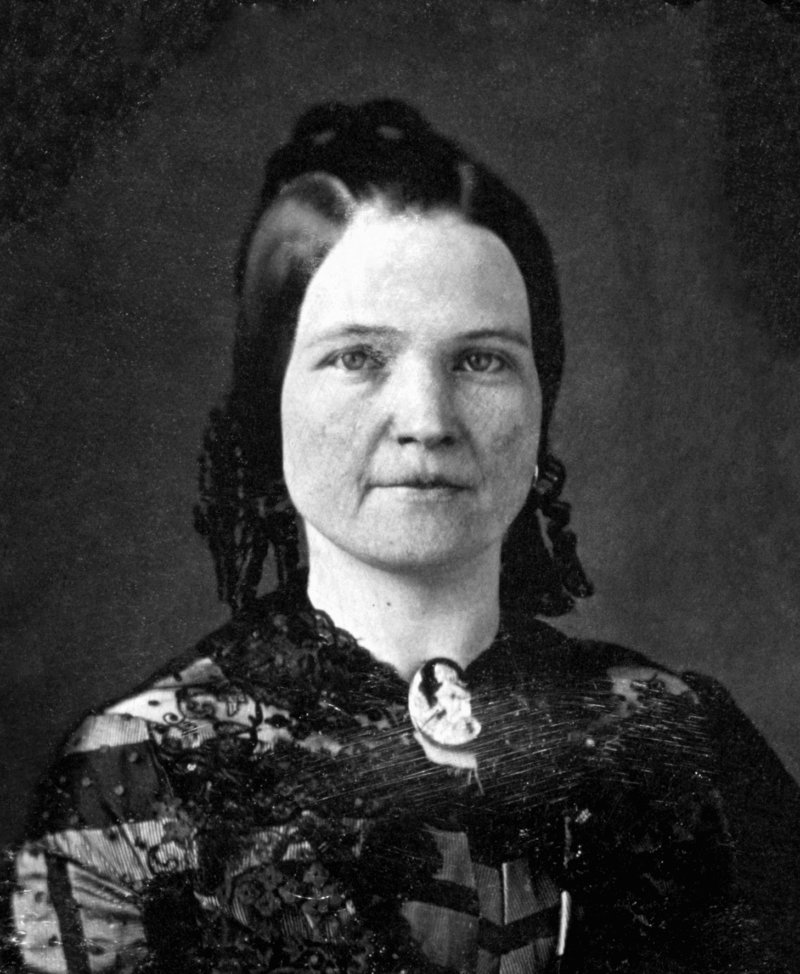 She was, nonetheless, a complicated woman. Let’s take a deeper look at the woman beside Abraham Lincoln.

Tragedy appeared early in Mary Lincoln’s life. Todd Lincoln was born on Dec. 13, 1818, into luxury in Lexington, Kentucky, and her father, who was a successful politician and businessman, owned several slaves. However, Todd Lincoln’s idyllic life crumbled when she was just six years old.

Her mother died in childbirth and left her father a widower with seven children, of whom Mary Todd was the fourth. Only a few months later, her father proposed to another woman and then remarried. 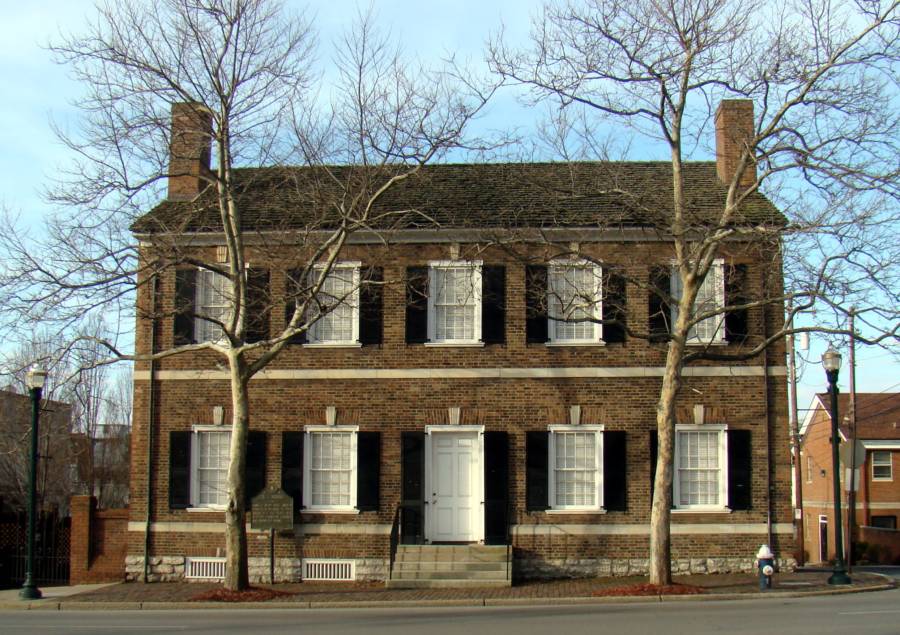 From this second marriage, nine children were produced and besides the bursting home, Todd Lincoln’s stepmother did not like her stepchildren. Although Mary Lincoln enjoyed more education than most girls of her era, she would nonetheless come to describe her childhood as “desolate.”

Despite this, Mary Todd had quite the reputation for a rambunctious and infectious attitude. Her brother-in-law once said that “Mary could make a bishop forget his prayers.” She also had an expensive flair that reared its head during her years in the White House.

In 1839 when Mary turned 21, she took the opportunity to leave the unhappy home and went instead to live with her older sister in Springfield, Illinois. It was there that she met Abraham Lincoln for the first time.

Mary and Abraham, A Mismatched Couple 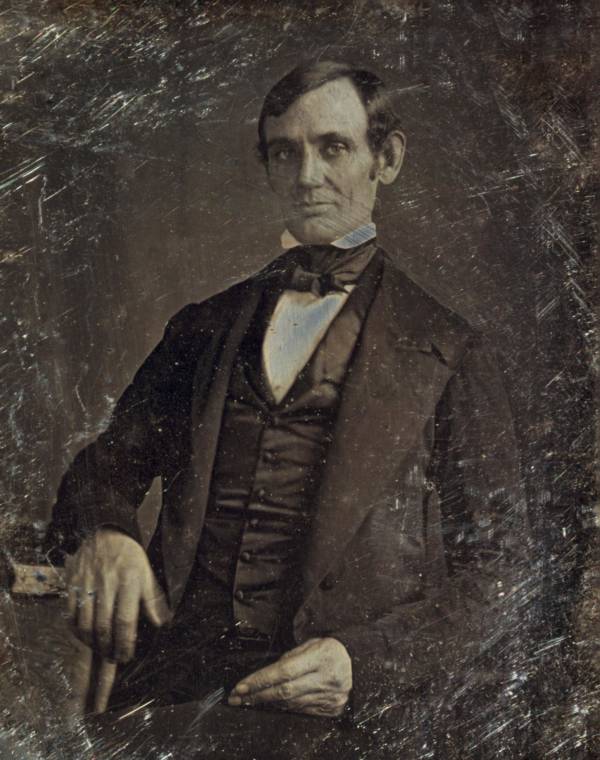 Library of Congress Abraham Lincoln as a young congressman a few years after his marriage to Mary Todd Lincoln. Circa 1846.

Mary Todd proved popular among the men of Springfield, though this was often tempered by the opinion that she was somewhat snobbish. She was even courted for a long time by Abraham Lincoln’s political rival, Stephen Douglas. But Mary Todd would have other plans for her love life.

By 1840, Todd and Abraham Lincoln had enjoyed a slow courtship that started as a friendship, based on their mutual interest in politics. But friends and family of Mary Todd watched the blooming relationship with trepidation.

Lincoln, although a lawyer, did not have the means to maintain Mary Todd’s lifestyle. Mary Todd’s sister, Elizabeth Porter Edwards, did not think the relationship would last. “I told Mary that she and Mr. Lincoln were not suitable,” her sister allegedly said. “[Mary and Abraham] were different in nature, and education and raising. They were so different that they could not live happily as man and wife.”

Despite a breach in their relationship in 1841 at which time Lincoln reportedly cut off their engagement, by 1842, Mary Todd and Abraham Lincoln had begun to see each other again. Though the tumultuousness between the two would not end here.

They married with short notice a few months later, a ceremony which her sisters later conveyed, “was not quite proper.” Mary gave birth to their first son, Robert, nine months later.

However, no conclusive evidence suggests that Mary Todd and Abraham Lincoln married because of this pregnancy.

Lincoln, for his part, reportedly remarked that “I shall have to marry that girl.” On the day of his wedding, some remembered Lincoln’s appearance as, “going to slaughter.” And as Lincoln dressed for the wedding, when someone asked where he was going, the future president responded, “I guess I am going to hell.”

It’s commonly said that the Lincolns had an unhappy marriage — though this is not entirely true. Mary Todd Lincoln sometimes became overcome with jealous rages. She once even allegedly struck Lincoln with a piece of firewood when he didn’t add it to the fire fast enough.

Depression also often drew her husband into periods of deep melancholy. Both seemed to have struggled with these issues — but they struggled together.

Although they suffered jointly during the worst years of the Civil War, Lincoln quite plainly loved his wife. As president, Lincoln told a journalist:

“My wife was as handsome as when she was a girl. And I, poor nobody, fell in love with her, and what is more, have never fallen out.”

Indeed, such was the support the two found between each other that when Lincoln won the election in 1860, he wrote his wife: “Mary, Mary, we are elected!”

The Death Of So Many Children

Abraham Lincoln’s wife bore him four children. They were all boys. Only their first-born, Robert, survived into adulthood.

The Lincolns’ second son, Edward Baker Lincoln, died a month before his fourth birthday. Always sickly, tuberculosis likely killed him. His death devastated both his parents. Mary Todd Lincoln could not stop crying. She refused to eat or sleep. But little Eddie’s death marked only the beginning of their family tragedy. 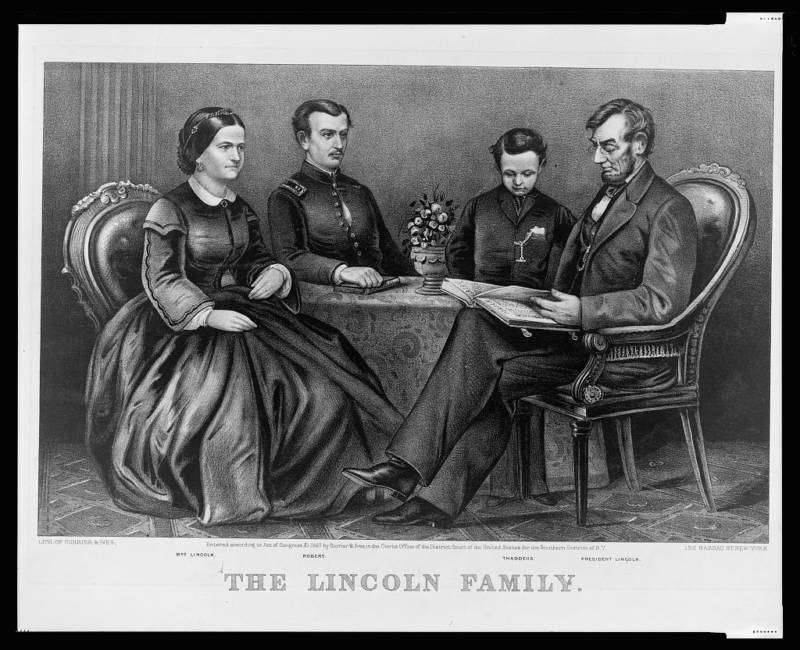 Wikimedia CommonsThe Lincoln family, Mary, Robert, Tad, and Abraham, after the deaths of Eddie and Willie.

Perhaps the hardest blow came to Abraham and Mary Lincoln once they had moved into the White House. During a tumultuous week in February 1862 — a period of seven days that encapsulated both Ulysses S. Grant’s victory at Fort Donelson and the inauguration of Jefferson Davis as president of the Confederacy — Willie grew deathly ill.

At 13 he died, likely of typhoid fever. The death of Willie, Mary Todd Lincoln’s “favorite child,” devastated both his parents. “My boy is gone — he is actually gone!” The president cried to his secretary.

Abraham Lincoln’s wife became inconsolable. She took to bed for three weeks, refused to attend Willie’s funeral, and couldn’t bear seeing anything or anyone that reminded her of her dead son. She suffered from severe depression and began to seek the help of psychics to contact Willie.

Then, Thomas “Tad” Lincoln, the youngest of the Lincoln boys, had a tragic turn of his own.

Younger than Willie by two years, he’d lost his best friend. He would soon lose his father. On a voyage back from Europe with his mother, Tad caught a bad cold. It developed into something more serious, and, at 18, Tad Lincoln, too, died.

A Family Divided By War And Murder

Like many families in the United States during the Civil War, the Todd Lincoln family found itself on different sides of the conflict. Mary Todd Lincoln, a public figure as Abraham Lincoln’s wife, often found herself accused of disloyalty for her southern upbringing and penchant for heavy spending. Accusations, though, came from both the North and the South.

The war claimed the lives of two of Mary’s half-brothers. She, like many Americans, viscerally experienced the tragedy of war. 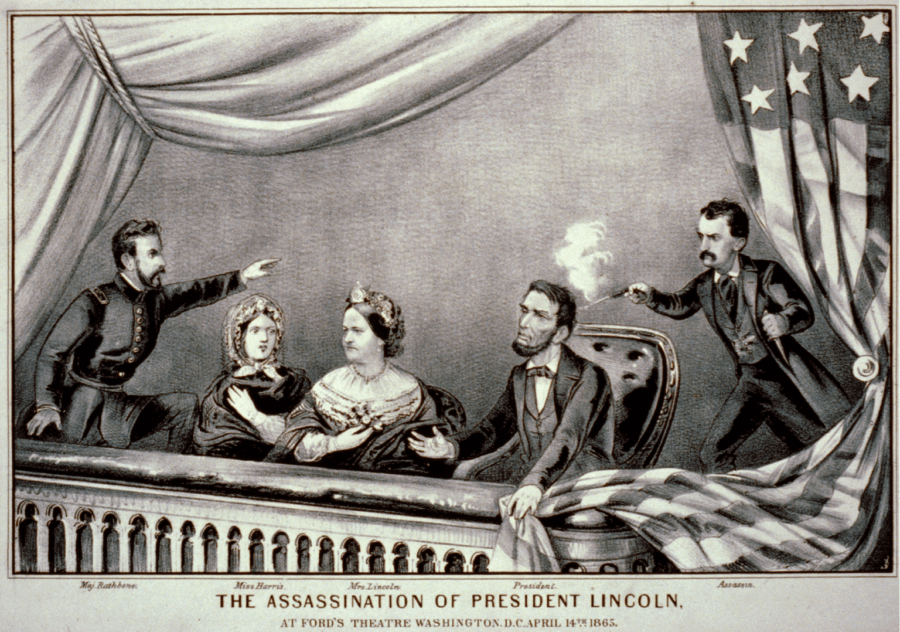 Wikimedia CommonsAbraham Lincoln is shot and killed, with Mary Todd Lincoln sitting at his side.

On a carriage ride on April 14, 1865, before going to a show at Ford’s Theatre, Lincoln told his wife: “We must both be more cheerful in the future — between the war and the loss of our darling Willie, we have both been very miserable.”

With the war coming to a close, a life away from misery seemed, finally, possible. But it was not to be as John Wilkes Booth killed Lincoln that night.

The tragic assassination could have turned out differently. Abraham Lincoln had originally invited General Ulysses S. Grant and his wife, Julia, to attend the show. Grant’s presence could have hindered Booth — it could have saved Lincoln. So why didn’t Grant and his wife accept Lincoln’s invitation? Because they had witnessed a temper tantrum of Mary Todd’s.

The Lincolns had come to visit the Grants at City Point, Virginia, where the general had set up camp. When Julia Grant and Mary Todd came upon Lincoln, Grant, General Edward Ord, and Ord’s wife, Sally, on horseback, Mary Todd became livid, snapping: “What does that woman mean by riding by the side of the President ahead of me?”

Sally Ord started to cry, Julia Grant tried to defend her, and Mary Todd then turned her venom onto Grant’s wife: “I suppose you think you’ll get to the White House yourself, don’t you?”

Horrified by the behavior of the First Lady, Julia Grant told her husband to decline the Lincolns’ invitation. Ulysses Grant made an excuse, and thus they did not go to the theatre that fateful night.

Misunderstood By Family, Friends, And History

In 1875, Mary Todd Lincoln’s last surviving son, Robert, had her committed to an insane asylum. Robert Lincoln had kept track of his mother’s compulsive spending, her visits with mediums, and other behavior that he deemed erratic. He was embarrassed by her publically inapropriate behavior.

Mary Todd was surprised at her door by officers, taken to court, and altogether unable to prepare a defense. At the trial, Mary Todd’s son affirmed: “I have no doubt my mother is insane. She has long been a source of great anxiety to me.” An all-male jury agreed that Mary Todd Lincoln was guilty of insanity and she was committed to an asylum for three months.

Once committed, Mary worked tirelessly to free herself. Eventually, with the help of outside friends, she did. At a second trial in 1876, a jury declared Mary Todd Lincoln sane. She lived the remainder of her years much as she had her earliest: alongside her sister, Elizabeth Edwards. She died of a stroke on the morning of July 16, 1882. 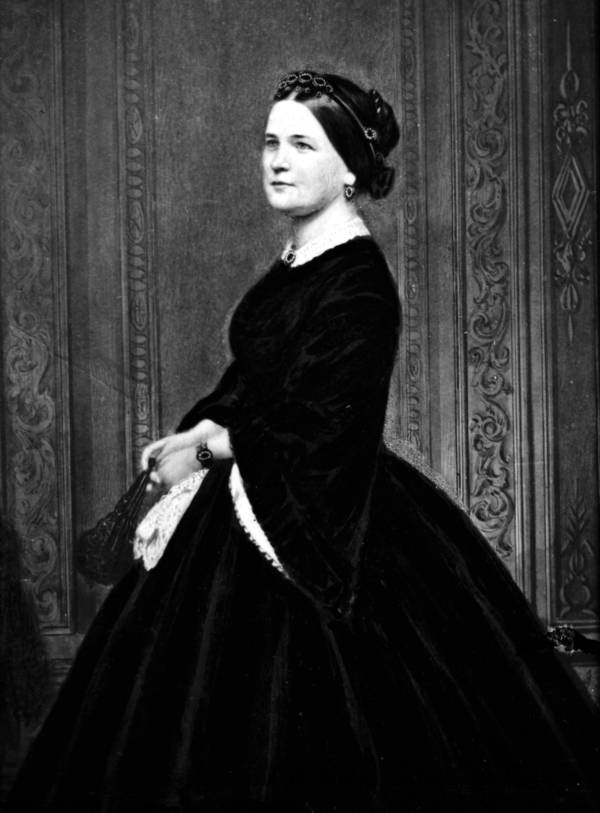 Wikimedia CommonsMary Todd Lincoln, posing for a portrait during her husband’s presidency.

Historians have long tried to understand Mary Todd Lincoln’s complicated behavior — whether or not her oddities and extreme moods had roots in mental illness. Today, the answer is still unclear. But perhaps the most tragic aspect of Mary Todd Lincoln’s life is her place in historical memory.

For one, the president’s wife almost never went by Mary Todd Lincoln. She took on her husband’s name: simply, Mary Lincoln. Much of the scholarship on Abraham Lincoln — written by men — tended to portray Mary Todd as an unequal partner, or even as a draining influence on the president. Much of her extreme behavior has been blamed, again, by male historians, on “hysterical” female problems.

Mary Todd could certainly have been jealous, irrational, depressive, and impulsive. But she also displayed true courage and grit. During the war, Mary Todd housed troops in the White House and visited wounded soldiers. She refused to leave Washington D.C. when it seemed that the Confederates might take the city.

Most of all, Mary Todd had an immensely positive influence on Lincoln himself. She discouraged him from taking the governorship in Oregon, a move which would have taken Lincoln far from the center of the political arena.

Indeed, it’s believed that it was the somewhat dowdy and well-to-do wife of Abraham Lincoln who was able to make an unemployed small-town lawyer presidential material. Lincoln himself was once described to be “a gloomy man — a sad man,” and that it was “His wife,” who “made him President.”

After learning about the complex character of Mary Todd Lincoln, check out this photo of an 11th generation Lincoln descendant. Then, read about how some of Lincoln’s greatest writing wasn’t written by Lincoln himself.

Kaleena Fraga
Kaleena Fraga is a French-speaking, history-loving writer based in Brooklyn. She is also the Editor in Chief for history-first.com
You might also like
Report a bad ad experience
×
Follow hu On