The third son of Abraham Lincoln, William Wallace Lincoln died at the age of just 11 after contracting typhoid fever in 1862. 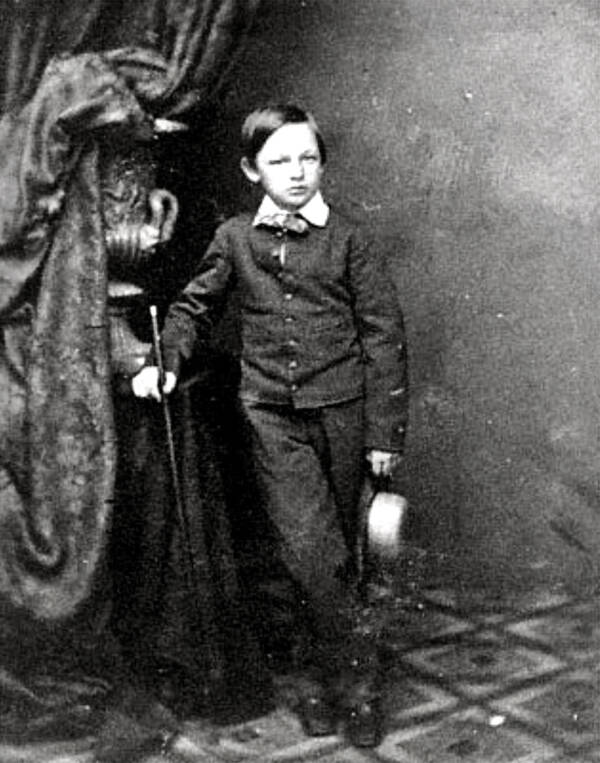 As the Civil War intensified in February 1862, Abraham Lincoln waged a private war within the White House. His two youngest sons, William Wallace Lincoln, “Willie,” and Thomas Lincoln III, “Tad,” had fallen ill. But though the president did all he could to make them better, only Tad recovered. Willie Lincoln died.

“My boy is gone!” Abraham Lincoln cried to his secretary, John Nicolay. “He is actually gone!”

The death of William Wallace Lincoln was one of the defining events of the Lincoln White House. As war ravaged the country, the president and his family grappled with their private grief.

So, who was Willie Lincoln, the president’s son who died during the Civil War?

William Wallace Lincoln started his life in a grieving household. Born on December 21, 1850, in Springfield, Illinois, he came into the world just 10 months after his three-year-old brother, Edward “Eddie” Baker Lincoln, left it. Willie was even named for the doctor who’d tried to save Eddie’s life. 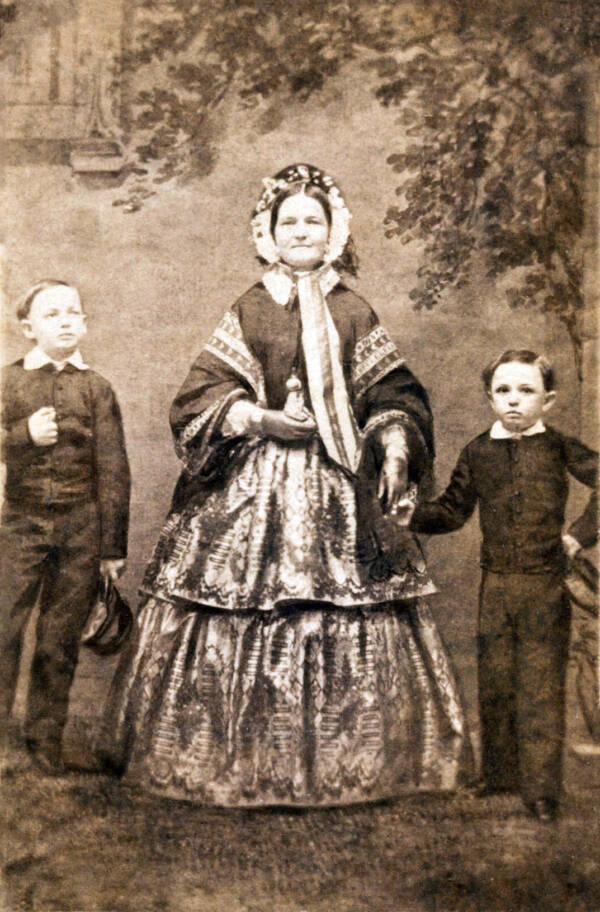 Although his parents, Abraham and Mary, mourned the loss of Eddie, they found great solace in Willie. Mary Todd Lincoln raved that Willie “was a very beautiful boy, with a most spiritual expression of face” who was also “a most peculiarly religious child.”

Her cousin called Willie a “noble, beautiful boy… of great mental activity, unusual intelligence, wonderful memory, methodical, frank and loving, a counterpart of his father — save that he was handsome.”

Indeed, of all the Lincoln children, Willie seemed the most like his father. Intelligent, good-natured, and gentle, he enjoyed learning, writing poems, and drawing up railroad timetables.

Willie wasn’t all studies, though. Alongside his younger brother, Thomas “Tad” Lincoln III, Willie got into plenty of trouble. He and Tad routinely terrorized their father’s law partner, William Herndon, who irritably described their father as “blinded to his children’s faults.”

But the course of Willie’s life — and the entire Lincoln family’s — changed in 1860. That year, his father Abraham was elected president. Willie, his parents, and his brother Tad prepared to move across the country to the White House in Washington, D.C.

Sadly, neither William Wallace Lincoln nor his father would ever make it back to Springfield while they were alive.

At first, William Wallace Lincoln and his little brother saw life at the White House as an adventure. As the country plummeted into the bloody Civil War, the two boys delighted in exploring the White House grounds and making mischief.

“Tad has been trying to make a war-map of Willie, and there are rapid movements in consequence on both sides,” wrote William O. Stoddard, a White House aide. “Peace is obtained by sending them to their mother, at the other end of the building.”

Willie and Tad clamored up to the White House roof, let their pet goat race through the mansion’s halls, and even once cut up a table cloth with knives. They also frequently burst into important meetings to see their father who relished in their presence instead of punishing them.

“Do you want to see Old Abe?” the boys would ask White House visitors. Upon receiving an affirmation, they’d point to someone else.

But in February 1862, the sound of the boys’ racing footsteps and excited shouts suddenly went quiet. Both Willie and Tad had fallen ill, likely with typhoid fever from contaminated water. 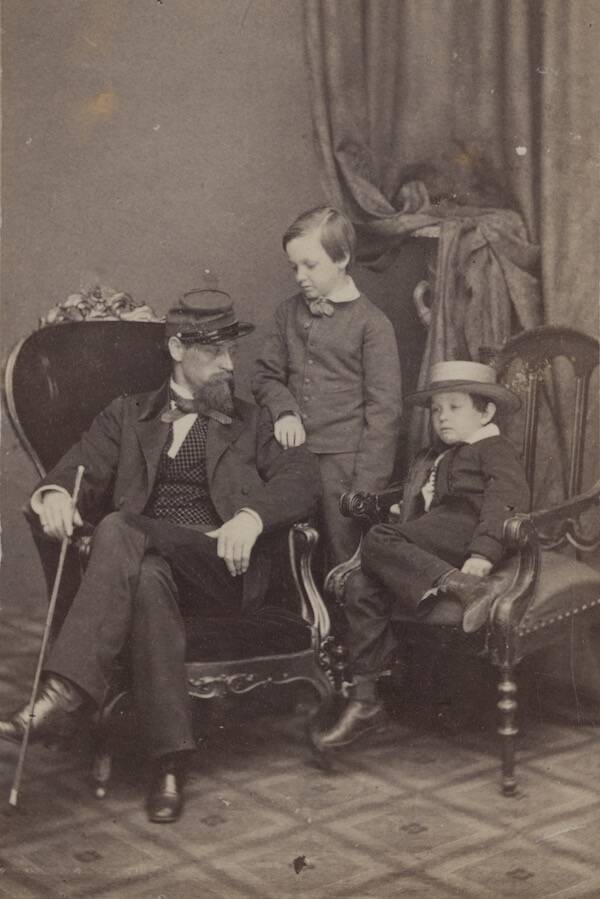 Library of CongressWilliam Wallace Lincoln (center) with his younger brother Tad (right) and their cousin Lockwood Todd in an 1861 Matthew Brady portrait.

For weeks, Willie became “weaker and more shadow-like” as his concerned parents tried to nurse him back to health. They did everything they could to make Willie better, even turning to folk remedies like Peruvian bark and beef tea. But nothing could be done. On Feb. 20, around 5 p.m., William Wallace Lincoln died. He was 11 years old.

“My poor boy. He was too good for this earth. God has called him home,” Abraham Lincoln said as he stood next to his dead son’s bed. “I know that he is much better off in heaven, but then we loved him so. It is hard, hard to have him die!”

Then, the president buried his face in his hands and wept.

“I stood at the foot of the bed, my eyes full of tears, looking at the man in silent, awe-stricken wonder,” recalled Elizabeth Keckley, a formerly enslaved woman who became Mary Lincoln’s seamstress and confident during the Civil War.

“His grief unnerved him, and made him a weak, passive child. I did not dream that his rugged nature could be so moved.”

Mary Lincoln took the loss even harder. She had done “all a mother ought or could during Willie’s sickness,” wrote Benjamin B. French, the Public Commissioner of Buildings.

“She never left his side at all after he became dangerous and almost wore herself out with watching, and she mourns as no one but a mother can at her son’s death.”

Mary Lincoln took to her bed for three weeks, refused to enter the bedroom where Willie had died, and didn’t go to his funeral on Feb. 24. The president attended alone.

“The funeral was very touching,” Keckley later wrote. Of Willie, she added: “He was his father’s favorite. They were intimates — often seen hand in hand. And there sat the man, with a burden on the brain at which the world marvels — bent now with the load both at heart and brain — staggering under a blow like the taking from him of his child.”

The death of William Wallace Lincoln touched every member of the family. His parents had lost their favorite child. His little brother, Tad, had lost his best friend and playmate.

The Aftermath Of Willie Lincoln’s Death 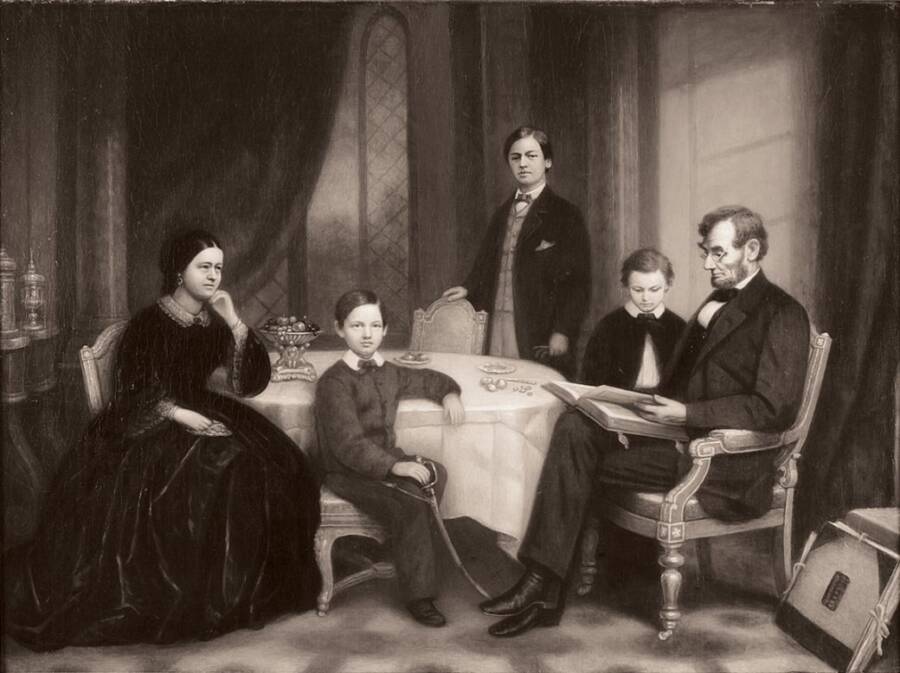 New York Historical SocietyAn 1865 portrait of the Lincoln family, Mary, Willie, Robert, Tad, and Abraham. Willie, who had died, was added in by the painter.

But Willie’s death had driven Mary nearly mad with grief. In one particularly wrenching anecdote, Keckley recalls an argument between Abraham and Mary, during which the president suddenly flung out his arm to point at the insane asylum nearby.

“Mother, do you see that large white building on the hill yonder?” the president said. “Try and control your grief, or it will drive you mad, and we may have to send you there.”

But after three years, things seemed to finally be improving for the Lincoln family — and the nation at large. By April 1865, the Civil War was sputtering to a bloody end. Abraham had won a second term in office and was looking forward to guiding the postwar nation.

On April 14, 1865, the presidential couple even took a carriage ride together before heading to the theater. “We must both be more cheerful in the future,” Abraham Lincoln told his wife. “Between the war and the loss of our darling Willie we have been very miserable.”

Tragically, life had one more misery for the Lincolns. That night, John Wilkes Booth shot and killed the president. Separated from Willie in life, Abraham joined his son in death.

On May 4, 1865, William Wallace Lincoln and his father were placed in a tomb together at Oak Ridge Cemetery back in Illinois. At long last, the president returned to the side of his favorite son.

After reading about William Wallace Lincoln, discover the hidden history of the Lincoln assassination. Or, learn about Abraham Lincoln’s surprising success as a wrestler.