Seven Baby Tasmanian Devils Were Just Born On The Australian Mainland — For The First Time In 3,000 Years

Though dingoes once drove Tasmanian devils to near-extinction, conservationists have successfully forged a new generation of these endangered creatures. 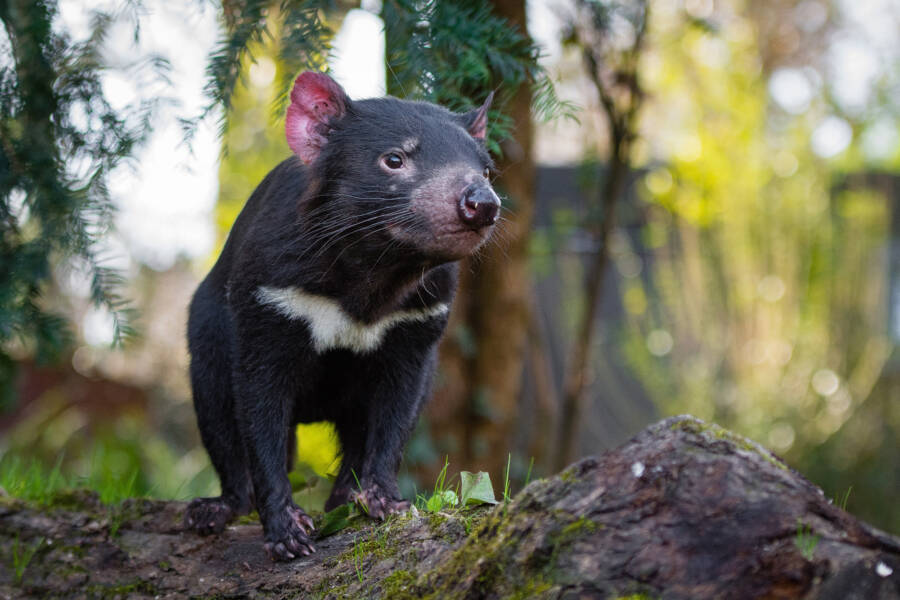 As bundles of joy go, these ones were ferocious. Tasmanian devils have infamous tempers and one of the most powerful bites of any mammal. But conservationists were over the moon at the birth of seven baby Tasmanian devils on mainland Australia, where the species went extinct thousands of years ago.

The seven babies — called “joeys” — were born at the 988-acre Barrington Wildlife Sanctuary in New South Wales, north of Sydney. Their birth follows a concerted effort by conservation groups to return Tasmanian devils to the continental mainland.

“We have been working tirelessly for the better part of 10 years to return devils to the wild of mainland Australia with the hope that they would establish a sustainable population,” announced the conservation group Aussie Ark after the joeys’ birth.

They had a lot to celebrate. Conservationists established Aussie Ark in 2011 with the goal of saving Tasmanian devils — the world’s largest carnivorous marsupials — from total extinction.

The devils first disappeared from mainland Australia 3,000 years ago. Then, they were ravaged by dingoes. Asian seafarers likely introduced the dingoes to Australia, which made quick work of the fierce but smaller Tasmanian devils. 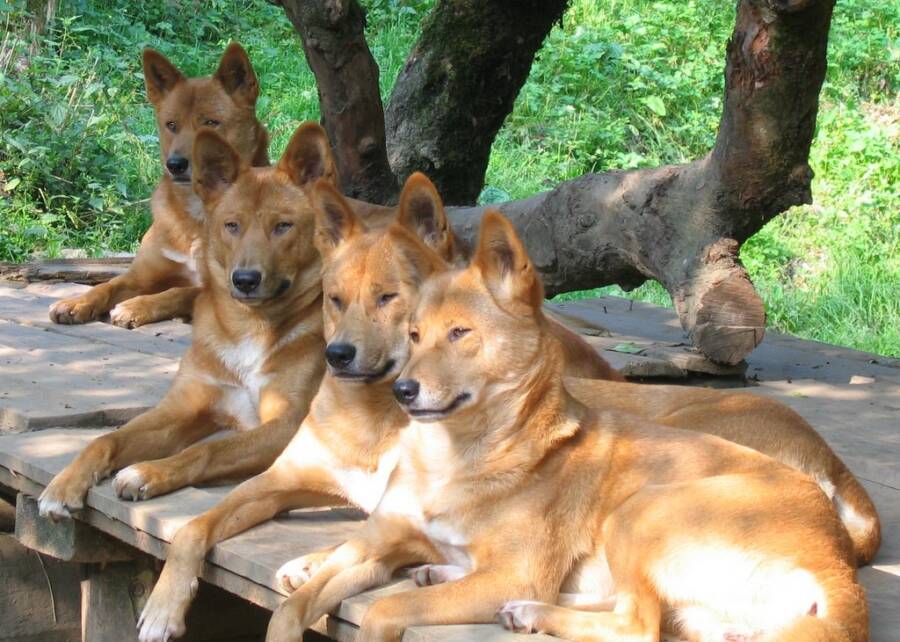 Since then, Tasmanian devils have only appeared on the island of Tasmania. But even there — safe from dingoes — their existence has been precarious.

The species suffered from a contagious form of cancer called Devil Face Tumor Disease (DFTD), which has killed about 90% of the Tasmanian devil population since 1996. Today, there are just 25,000 Tasmanian devils left in the wild.

Aussie Ark wanted to change that. In late 2020, they released 26 Tasmanian devils into the wilds of mainland Australia — and crossed their fingers.

“There is so much at stake here. We’ve done everything we can, but if the devils don’t breed, it’s all over,” explained Tim Faulkner, the president of Aussie Ark.

Waiting for the devils to breed was “nerve-wracking,” said Faulkner. But patience paid off. The freed Tasmanian devils bred together and gave birth to joeys in mainland Australia — for the first time in 3,000 years. 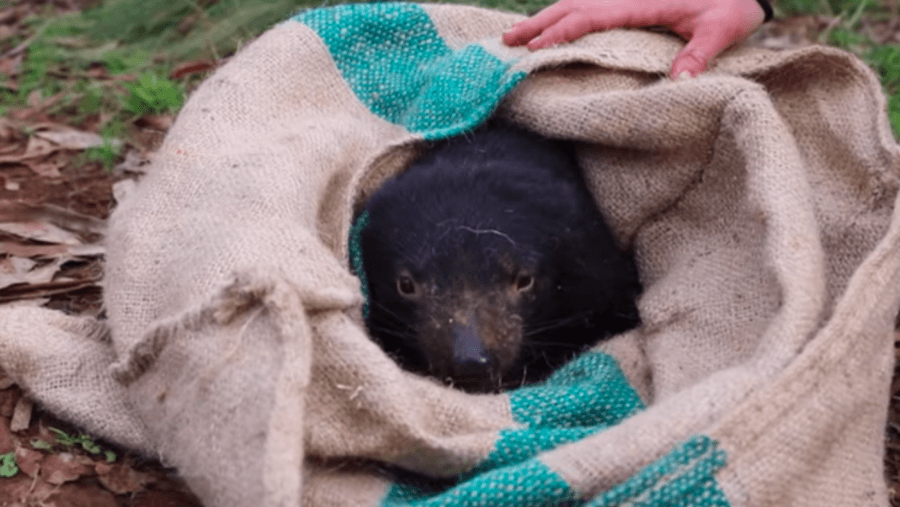 “We had been watching them from afar until it was time to step in and confirm the birth of our first wild joeys,” Faulkner enthused. “And what a moment it was!”

He and his team identified the tiny joeys in their mothers’ pouches. The size of a grain of rice, bald, and blind, the joeys are nevertheless as ferocious as their parents. Each Tasmanian devil gives birth to between 20 and 40 joeys at once. But since the mothers can feed just four babies, only the strongest babies can survive.

The rest get unceremoniously eaten by mom.

The babies that do survive will remain in their mother’s pouch for about four months. After leaving the pouch, it will take about six months for them to become independent. Then, Aussie Ark is hopeful that they will continue the lineage of Tasmanian devils in mainland Australia.

“Having a population of devils away from the diseased landscape in Tasmania is crucial,” Faulkner explained. But he also pointed out that saving the Tasmanian devils could also help save Australian wildlife in general. 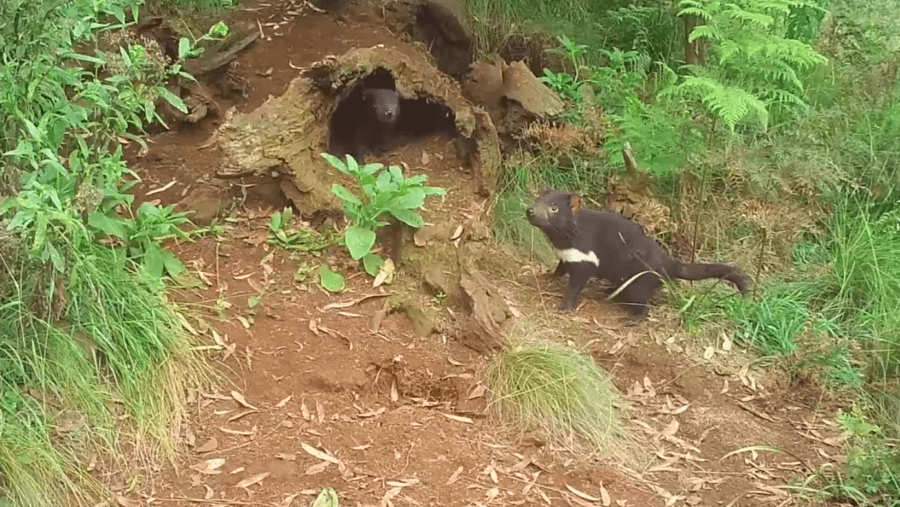 Aussie Ark/FacebookTwo of the Tasmanian devils reintroduced by Aussie Ark.

“By having devils back in the environment,” he said, “they help regulate introduced feral pests like the fox and cat.”

Don Church, the president of conservation NGO Re:wild — which also supported the reintroduction of Tasmanian devils to mainland Australia — agrees.

“Tasmanian devils are ecosystem engineers that can restore and rebalance the wild to the benefit of other native wildlife, to the climate, and to people.”

For Faulkner, it’s been a joy watching the Tasmanian devils his organization reintroduced to the wild grow and thrive. And he can’t wait to see how the newborn joeys grow up.

“The ultimate success,” he said, “is a self-regulating, self-sustaining population of devils on mainland Australia — contributing and balancing the greater ecology.

With a smile, he added: “The devils survived, thrived, we have joeys — but it’s still the beginning.”

After reading about the reintroduction of Tasmanian devils to mainland Australia, learn about the feral cats running wild in the country. Then, see the video that some say proves the extinct Tasmanian tiger is alive and well.