27 Interesting India Facts About Tigers, The Taj Mahal, And More

These interesting facts about INdia explore the rich culture and history of the largest democracy on Earth. 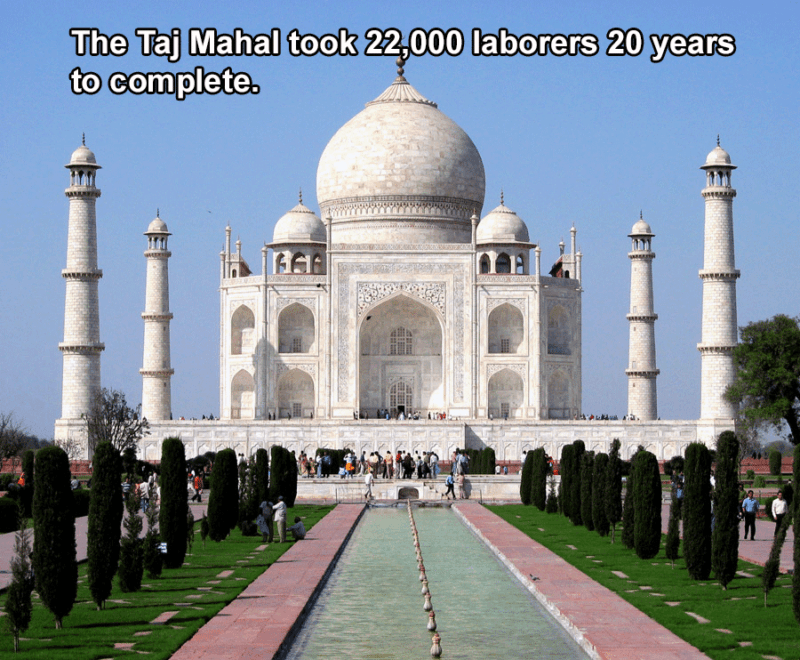 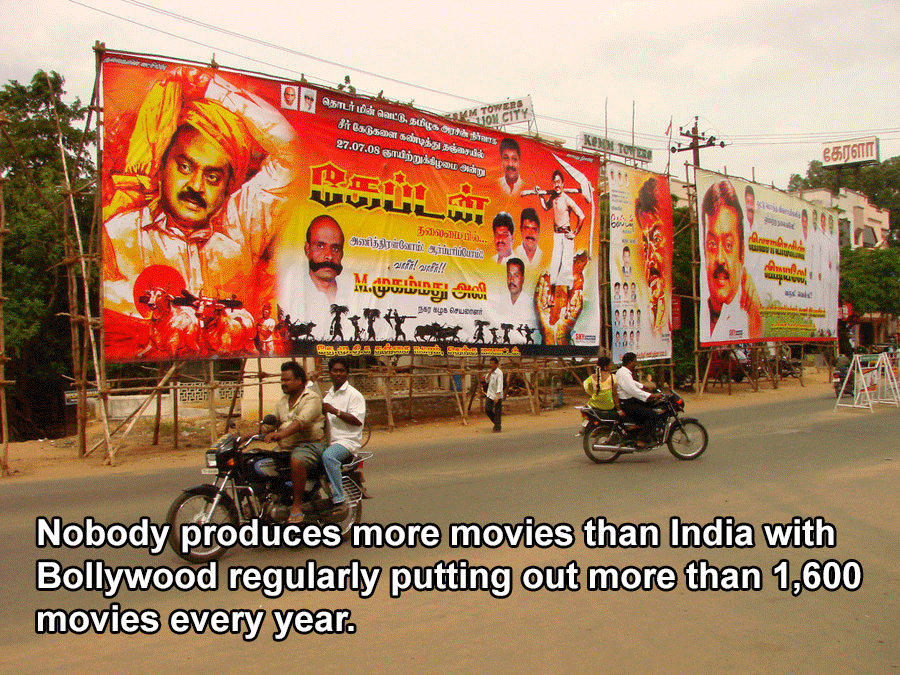 Nobody produces more movies than India with Bollywood regularly putting out more than 1,600 movies every year.Adam Jones/Flickr 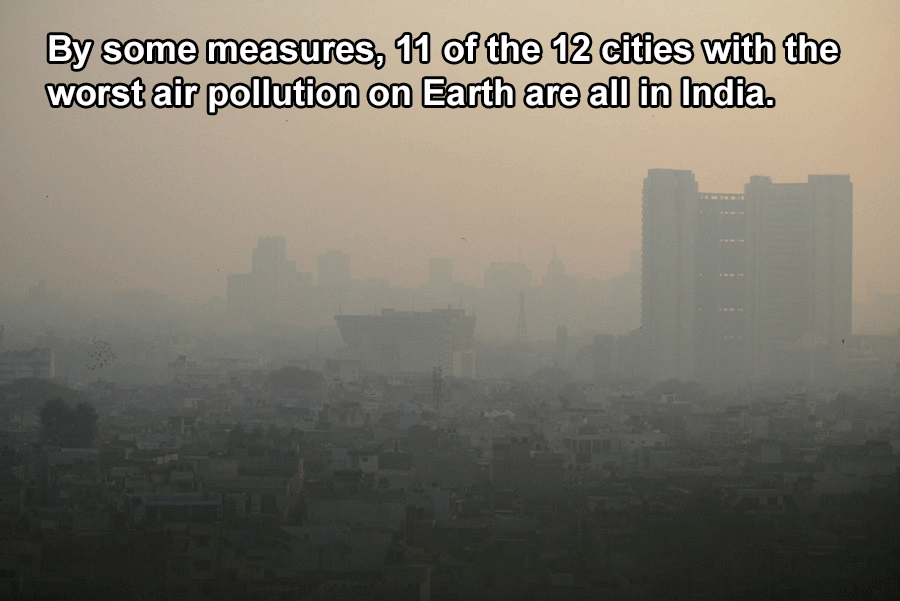 By some measures, 11 of the 12 cities with the worst air pollution on Earth are all in India.Jepoirrier/Flickr 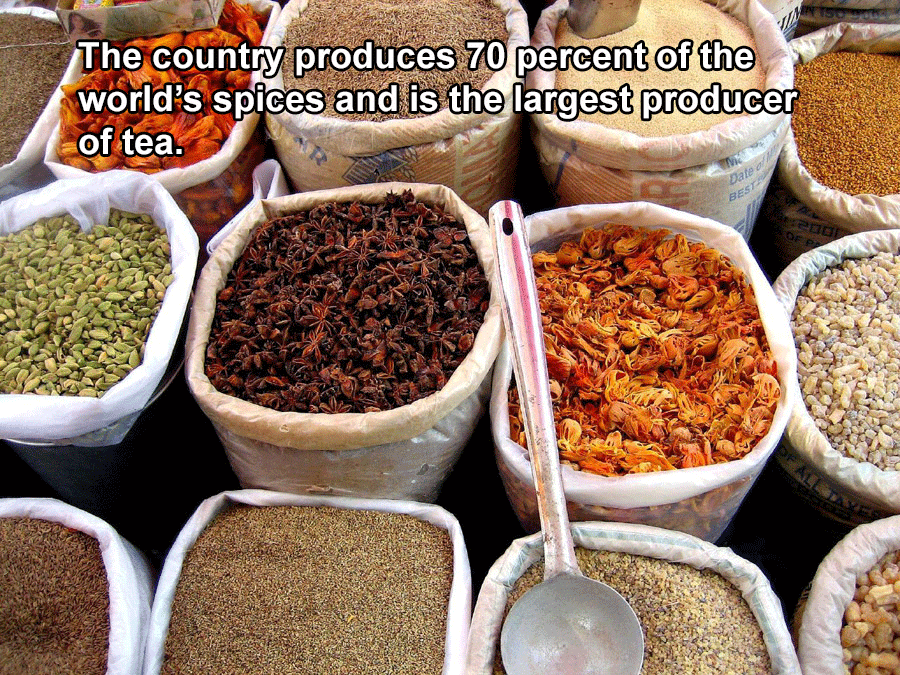 The country produces 70 percent of the world's spices and is the largest producer of tea.Wikimedia Commons 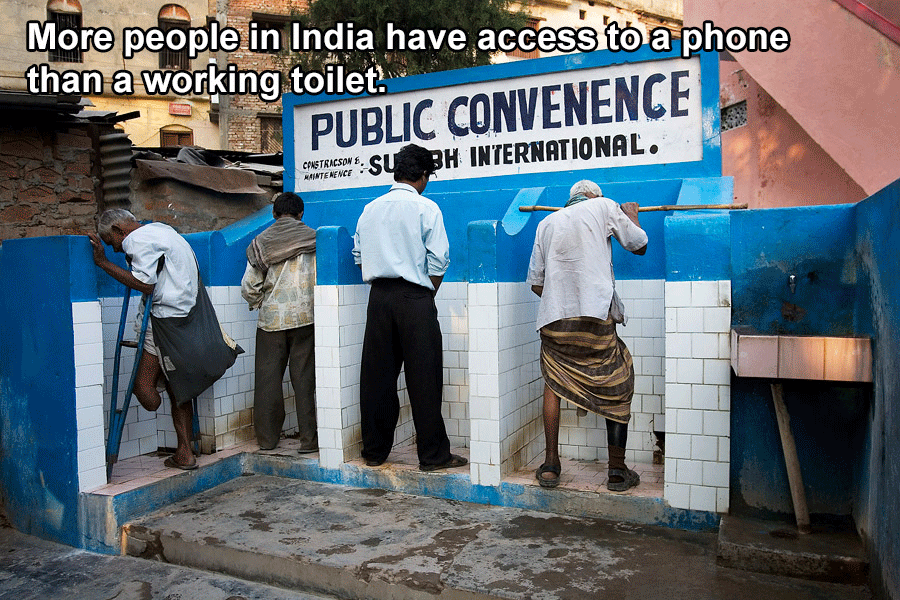 More people in India have access to a phone than a working toilet.Wikimedia Commons 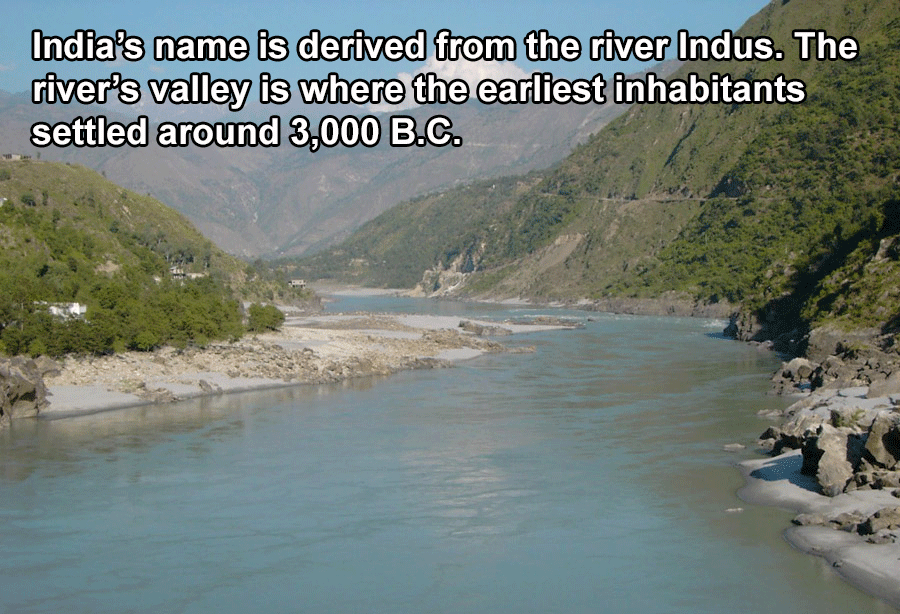 India's name is derived from the river Indus. The river's valley is where the area's earliest inhabitants settled around 3,000 B.C. Wikimedia Commons 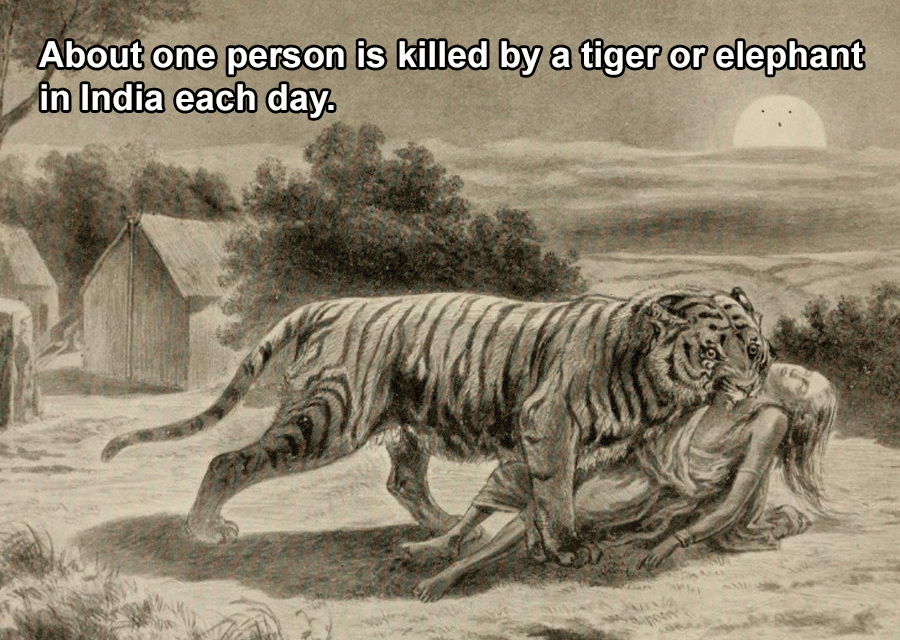 About one person is killed by a tiger or elephant in India each day.George P. Sanderson/Wikimedia Commons 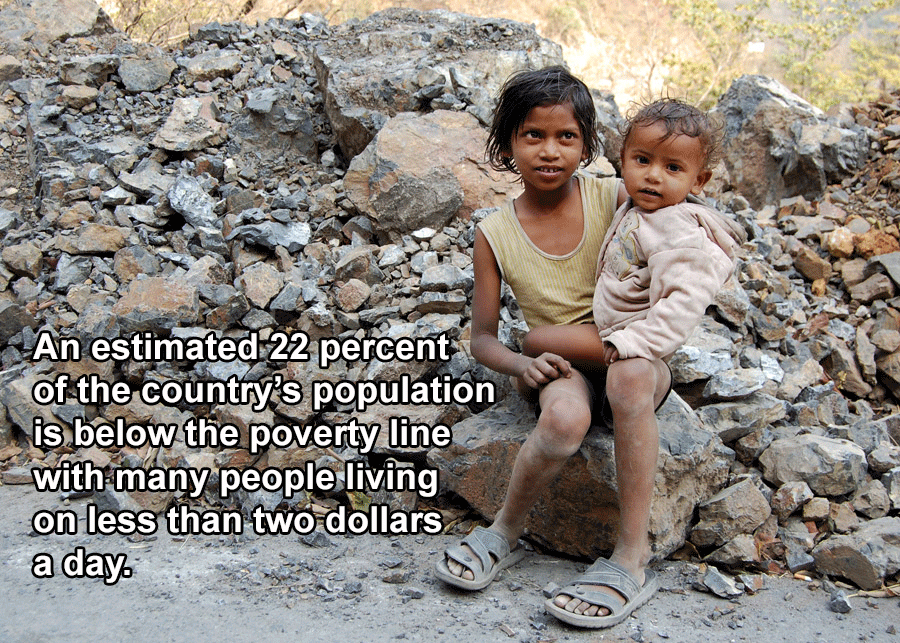 An estimated 22 percent of the country's population is below the poverty line with many people living on less than two dollars a day.Wikimedia Commons 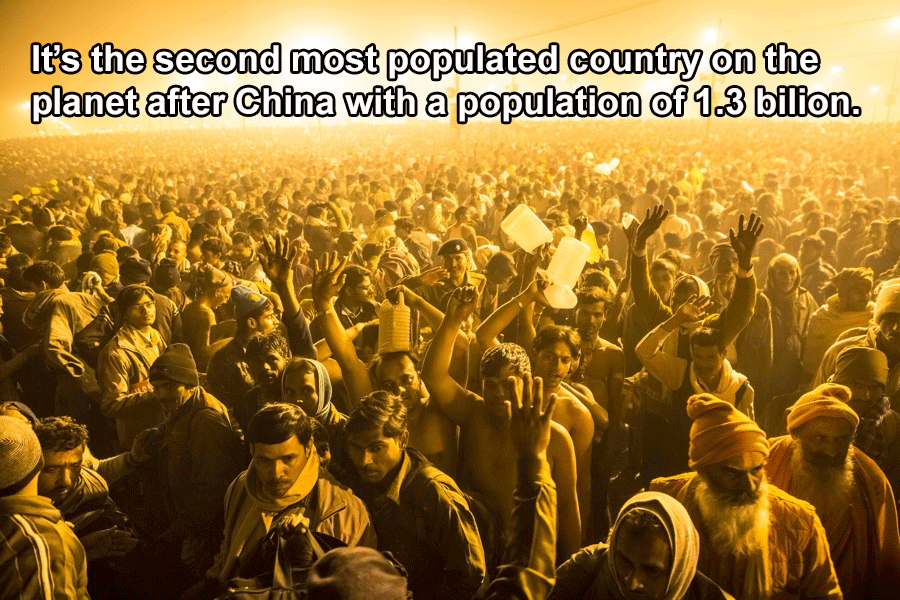 It's the second most populated country on the planet after China with a population of 1.3 billion.Daniel Berehulak/Getty Images 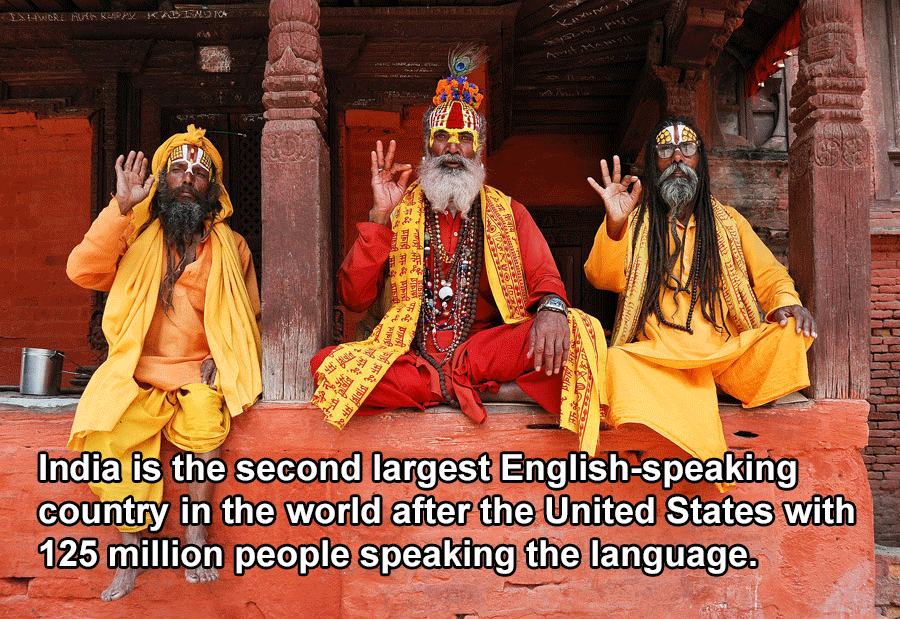 India is the second largest English-speaking country in the world after the United States with 125 million people speaking the language.Wikimedia Commons 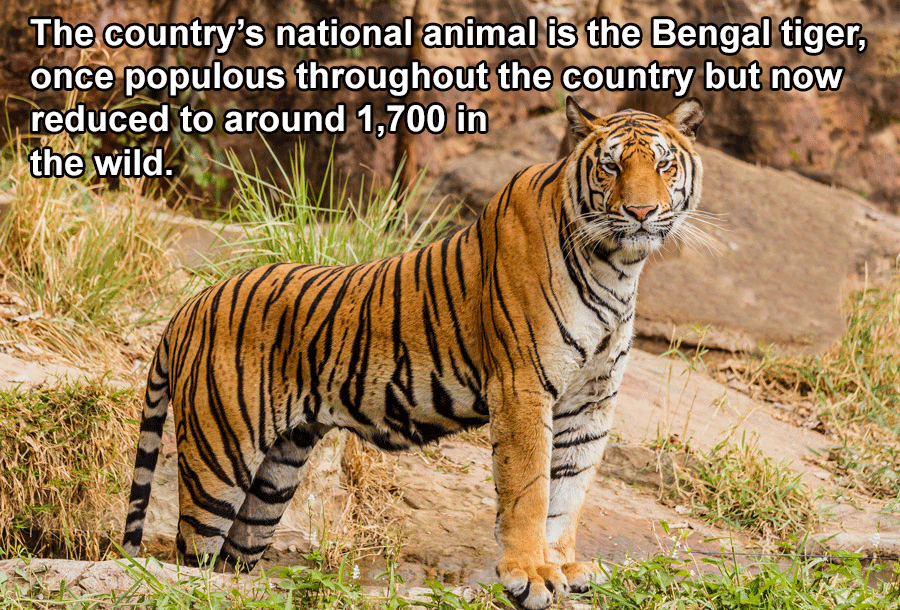 The country's national animal is the Bengal tiger, once populous throughout the country but now reduced to around 1,700 in the wild.Derrick Brutel/Flickr 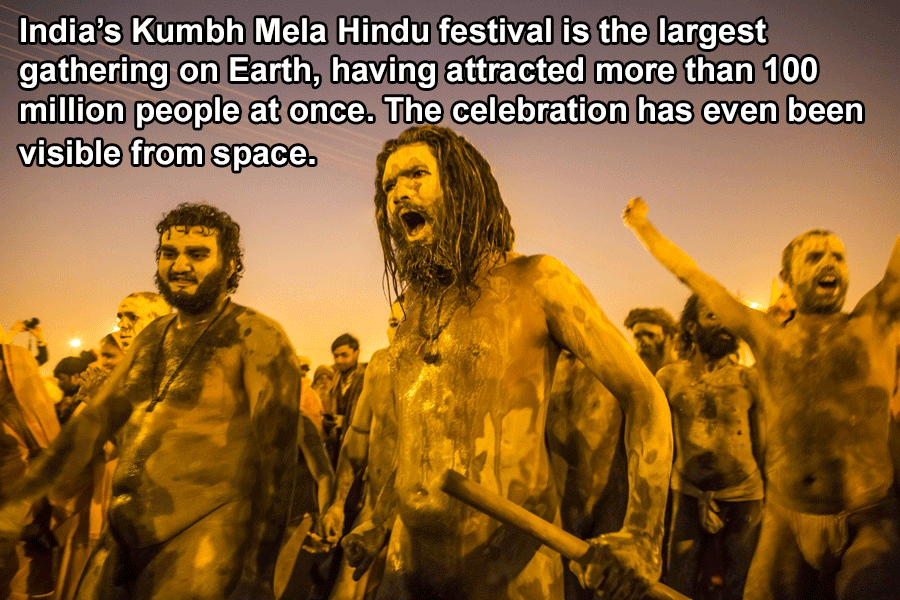 India's Kumbh Mela Hindu festival is the largest gathering on Earth, having attracted more than 100 million people at once. The celebration has even been visible from space.Daniel Berehulak/Getty Images 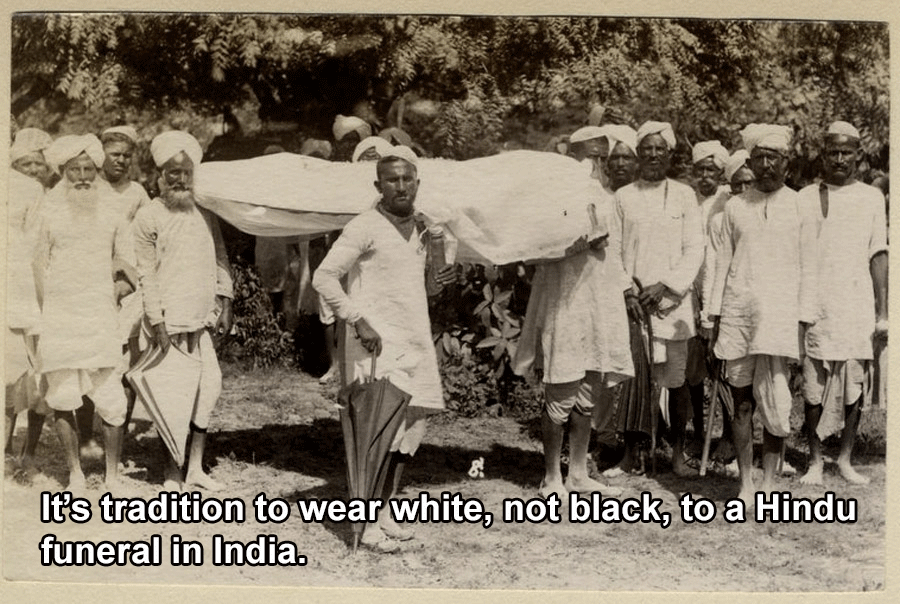 It's tradition to wear white, not black, to a Hindu funeral in India.Wikimedia Commons 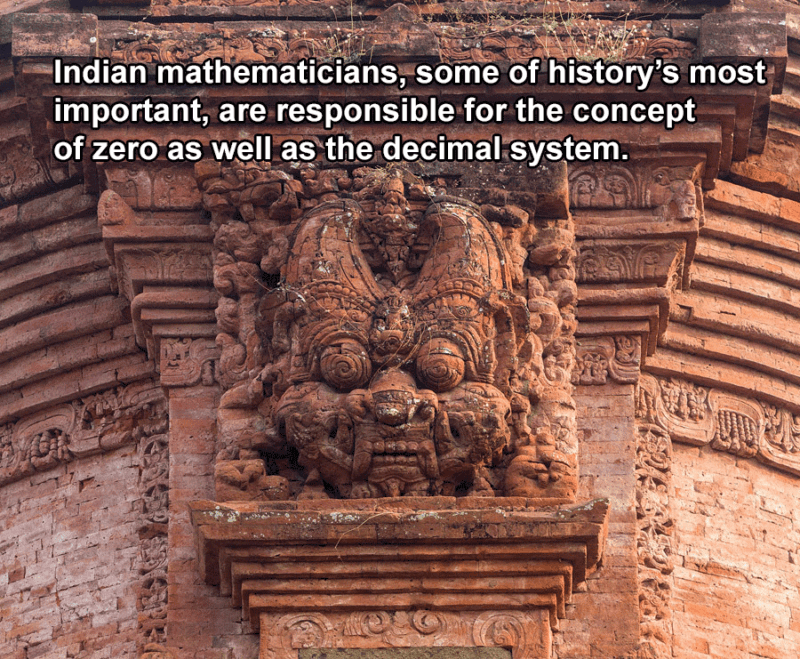 Indian mathematicians, some of history's most important, are responsible for the concept of zero as well as the decimal system. 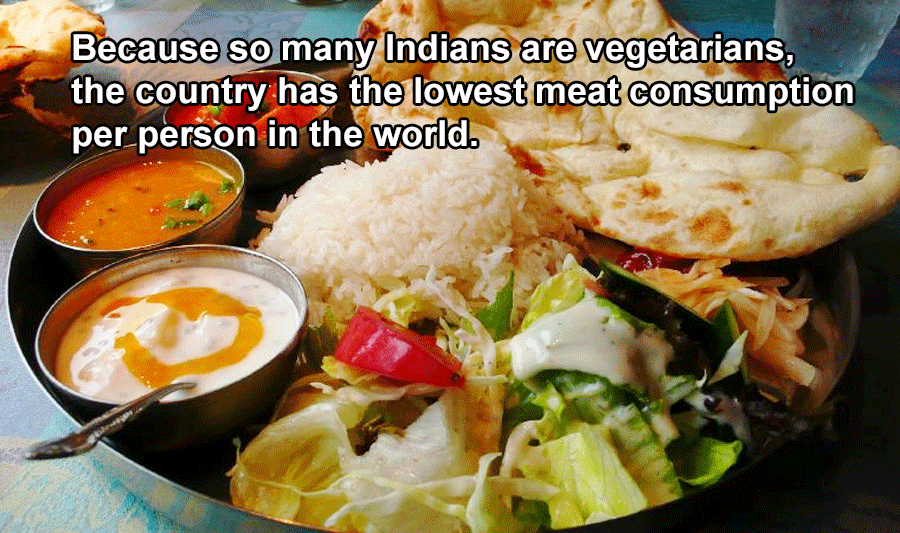 Because so many Indians are vegetarians, the country has the lowest meat consumption per person in the world.Wikimedia Commons 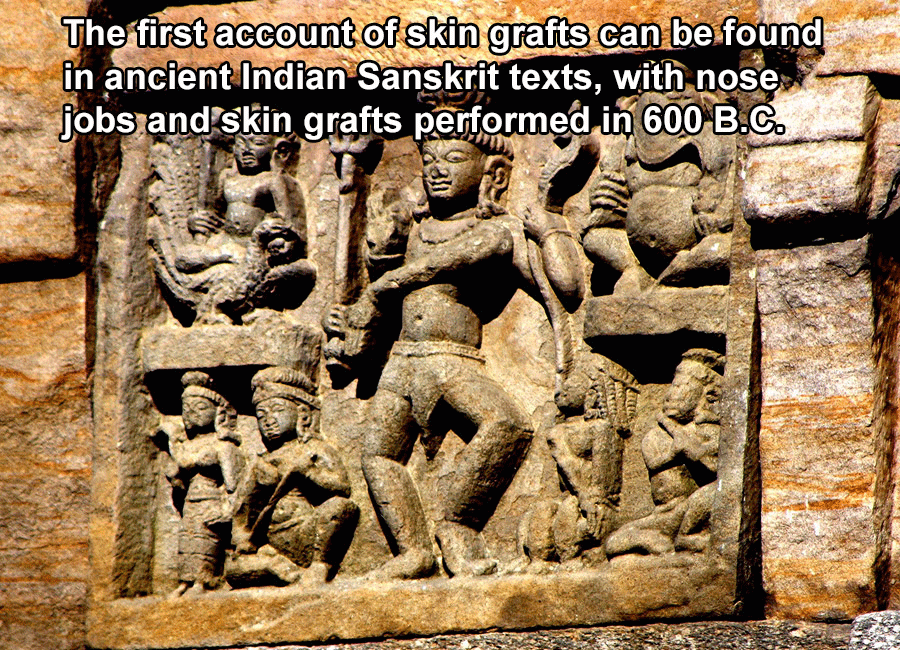 The first account of skin grafts can be found in ancient Indian Sanskrit texts, with nose jobs and skin grafts performed in 600 B.C.Wikimedia Commons 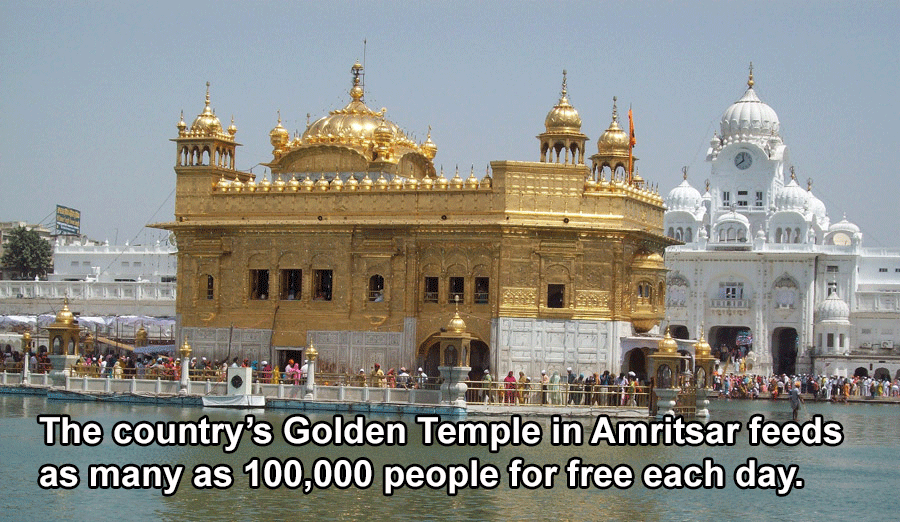 The country's Golden Temple in Amritsar feeds as many as 100,000 people for free each day.Wikimedia Commons 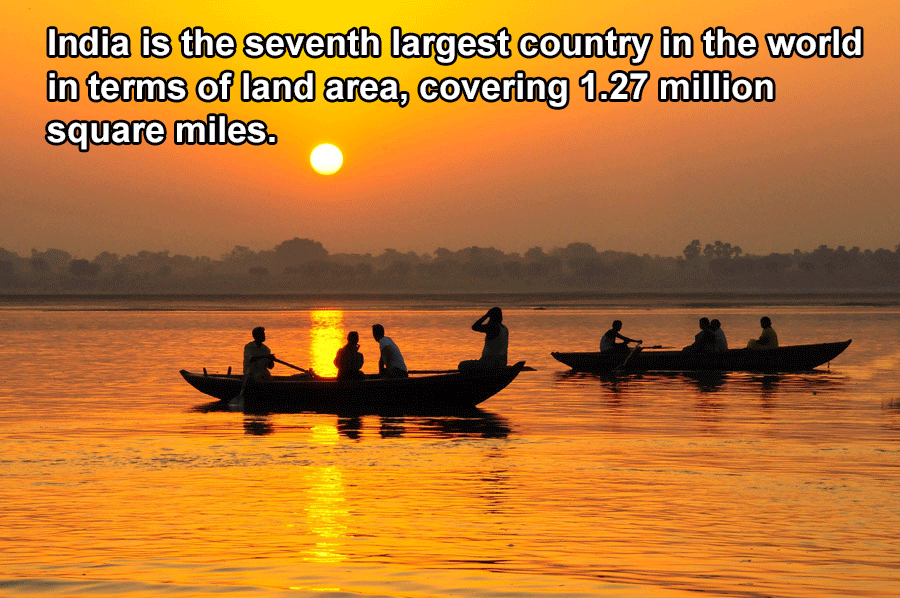 India is the seventh largest country in the world in terms of land area, covering 1.27 million square miles.TonW/Pixabay 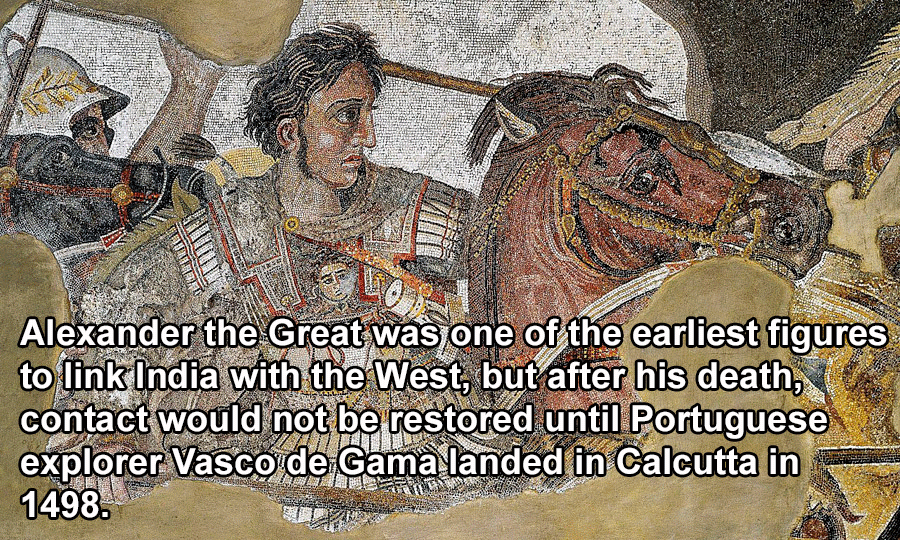 Alexander the Great was one of the earliest figures to link India with the West, but after his death, contact would not be restored until Portuguese explorer Vasco da Gama landed in Calcutta in 1498.Wikimedia Commons 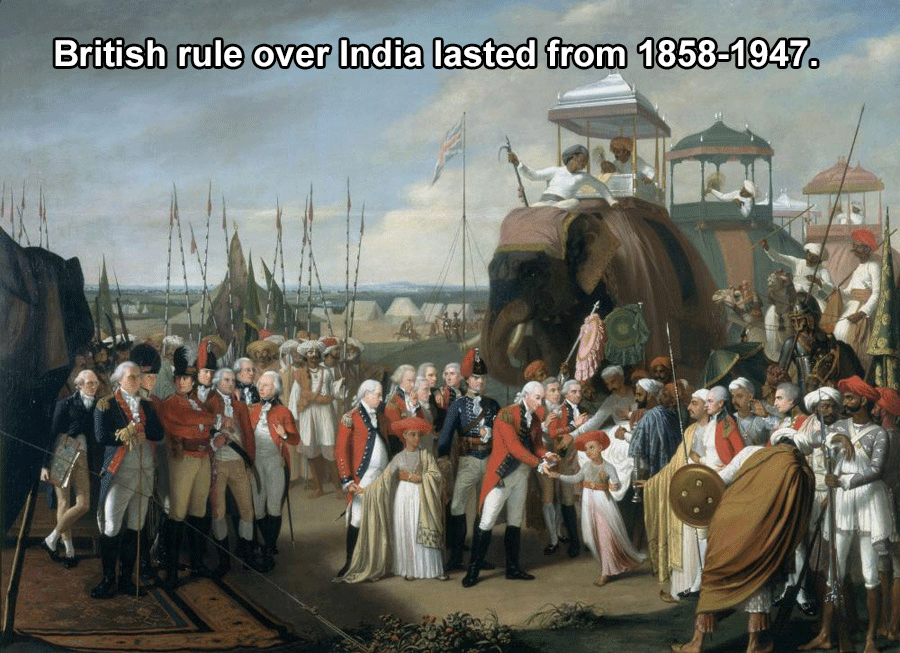 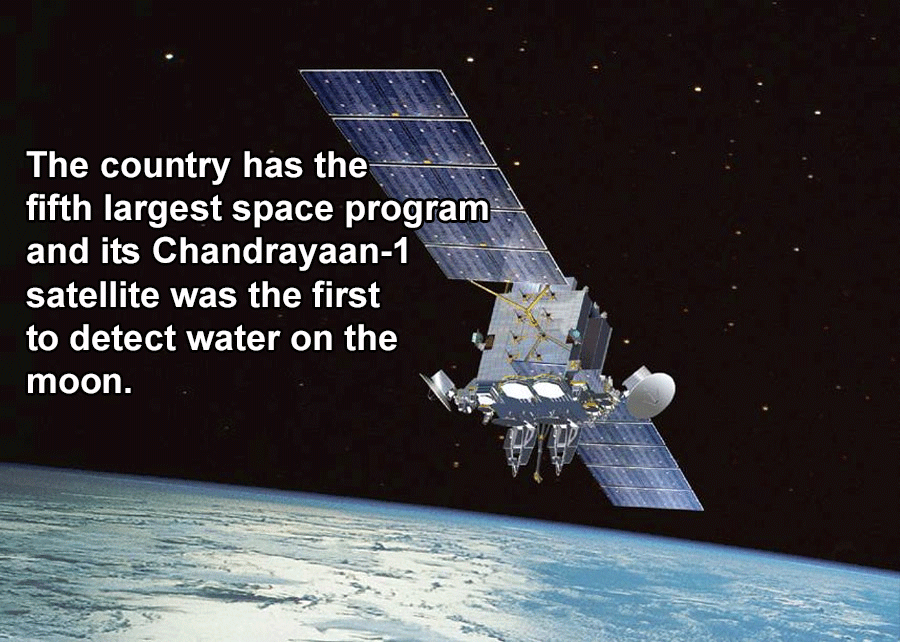 The country has the fifth largest space program and its Chandrayaan-1 satellite was the first to detect water on the moon. Wikimedia Commons 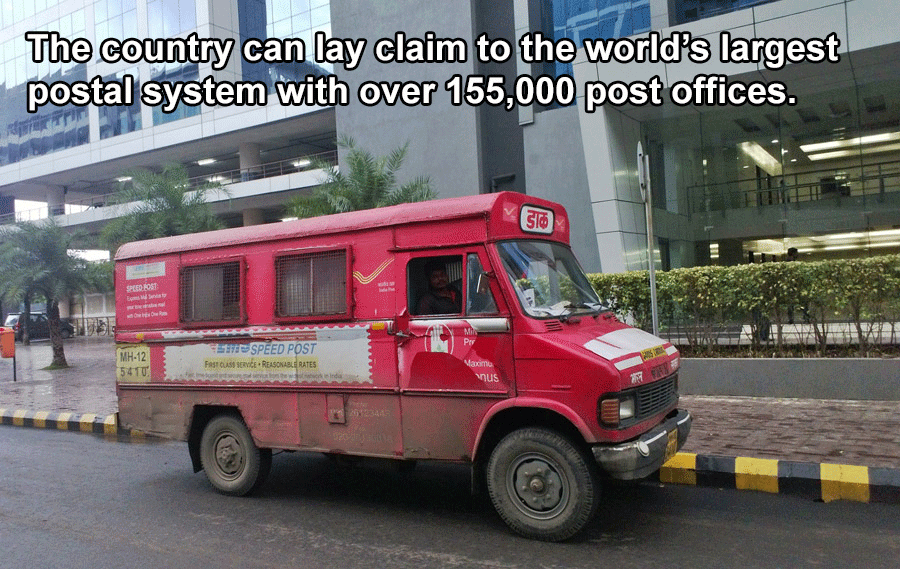 The country can lay claim to the world's largest postal system with over 155,000 post offices.Anu Raj/Flickr 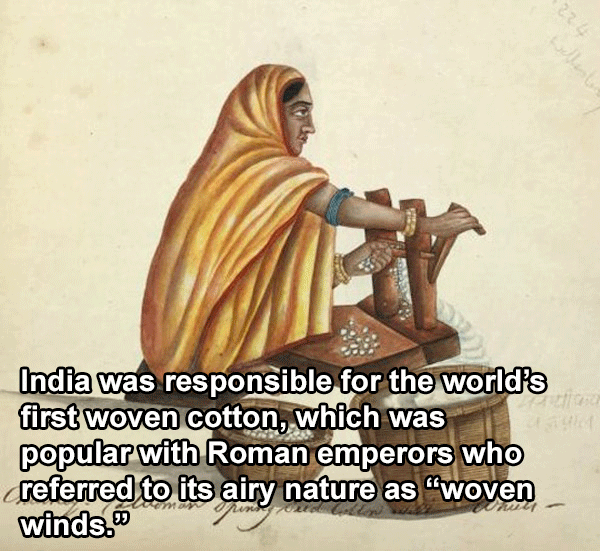 India was responsible for the world's first woven cotton, which was popular with Roman emperors who referred to its airy nature as “woven winds.”Wikimedia Commons 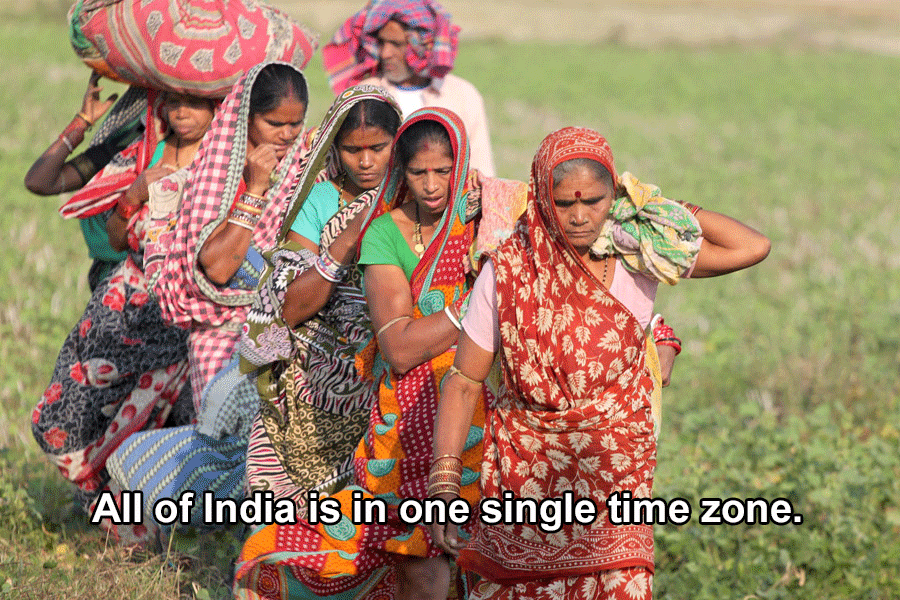 All of India is in one single time zone.JudaM/Pixabay 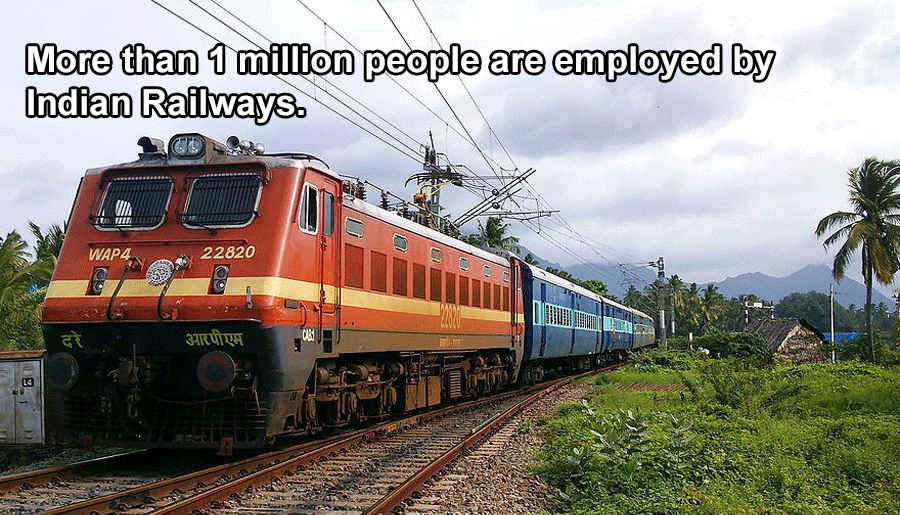 More than 1 million people are employed by Indian Railways.Wikimedia Commons 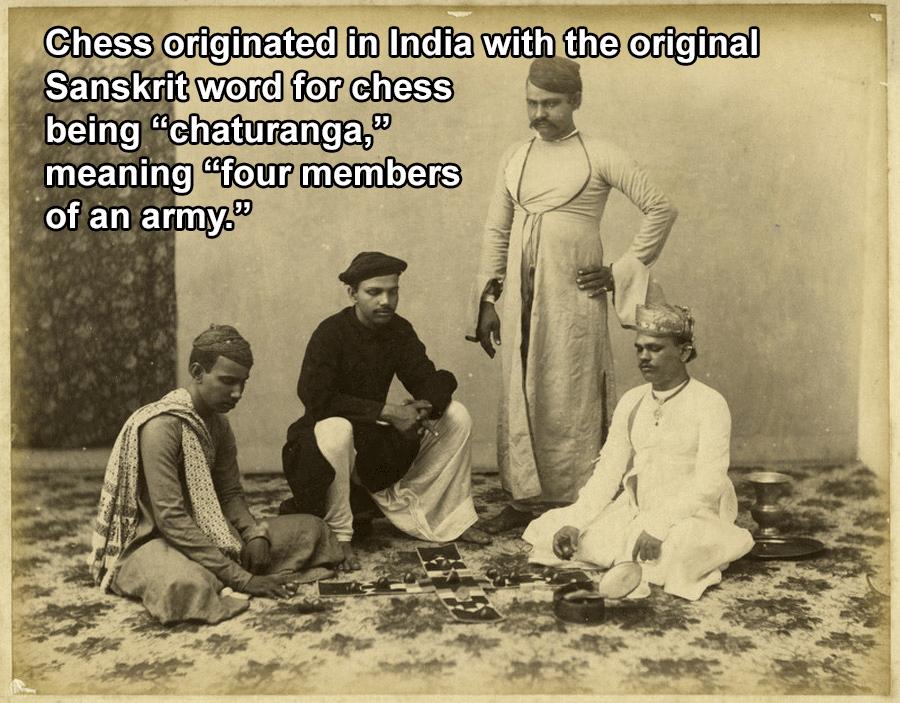 Chess originated in India with the original Sanskrit word for chess being "chaturanga," meaning "four members of an army.”Wikimedia Commons 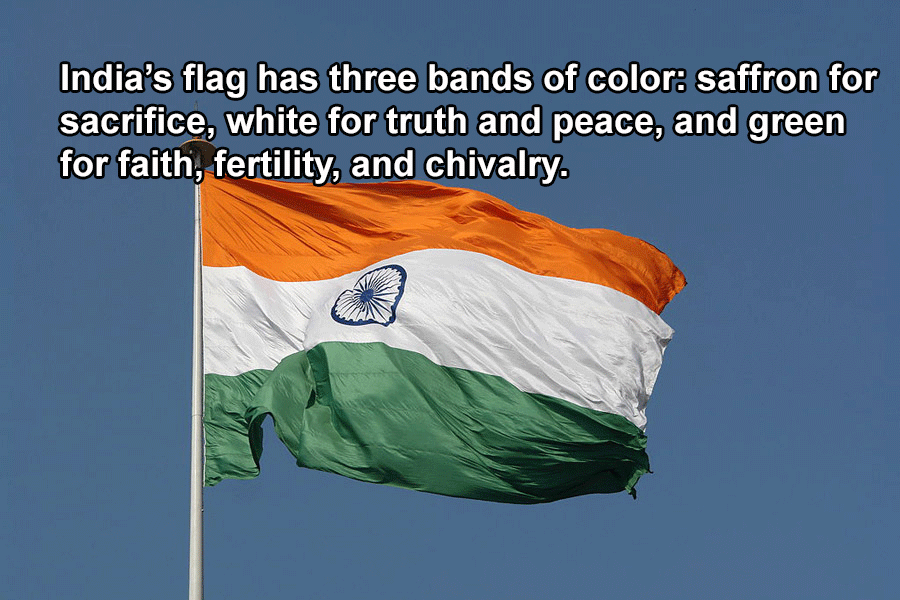 India's flag has three bands of color: saffron for sacrifice, white for truth and peace, and green for faith, fertility, and chivalry.Wikimedia Commons

For those who have never been to India or know little about the country, images of the Taj Mahal, Hindu iconography, Gandhi, and chicken tikka masala may represent most of what comes to mind.

Of course, a country as vast and culturally rich as India offers infinitely more than the little commonly known by outsiders. From the spices in your food to the basic math you use in your everyday life, India's contributions to humankind are globe-spanning and essential.

The country that is now India started making its mark on world history more than 5,000 years ago, when the Indus Valley Civilization (one of the oldest in recorded history) began flourishing. And after more than five millennia of growth, India is now the second most populous country on Earth and is home to nearly 18 percent of the world's people.

The most populous democracy in the world, India consists of 29 diverse states and seven other territories with more than a dozen languages spoken by millions of people each throughout the country.

Such diversity is the result of a long and complex history that has seen India ruled by Arabs, Turks, Persians, and the British Empire, which controlled the country until the mid-20th century. Today, India is a unique tapestry of various ethnic, cultural, and religious influences.

So while the India facts in the gallery above may only scratch the surface, they're sure to leave you with a deeper understanding of this country's fascinating culture and history.