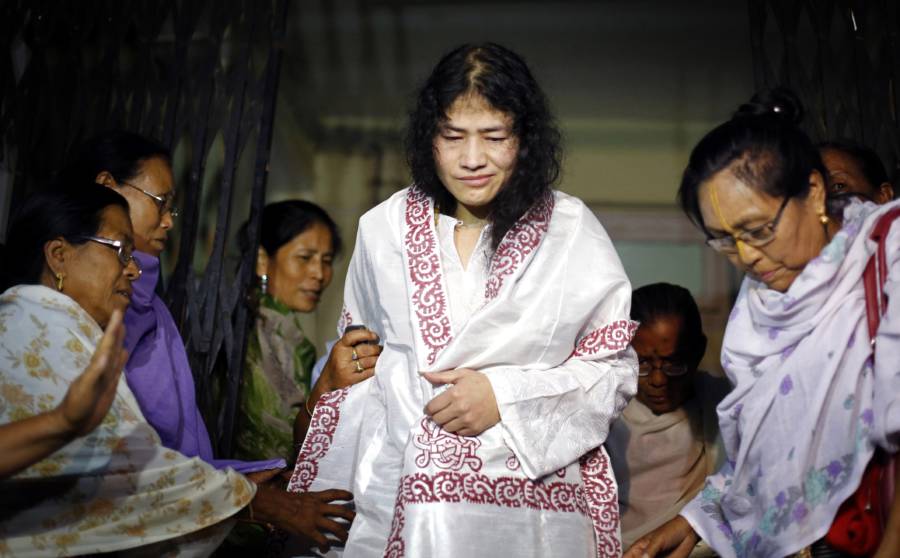 STRDEL/AFP/Getty ImagesIrom Sharmila (center) is greeted by her supporters following her release from a hospital jail in Imphal, India on August 20, 2014.

The “Iron Lady of Manipur,” now 44, began her fast on November 5, 2000, just days after Indian paramilitary forces gunned down ten civilians in Malom, a small town in the northeastern state of Manipur. The area has long been a battleground for ethnic separatists and government forces that have come under fire for human rights abuses carried out while suppressing said insurgency.

After those ten civilians were caught in the crossfire (or knowingly gunned down, depending on who you ask), Sharmila refused to eat, drink, comb her hair, or look in a mirror until the Armed Forces (Special Powers) Act (AFSPA) was repealed.

That law, passed in 1958, gives military forces operating in “disturbed areas” (like Manipur) extraordinary powers to squash any kind of rebellion. Of course, many groups such as Amnesty International claim that the AFSPA has actually “enabled serious human rights violations…and shielded those responsible.”

It was precisely these abuses that Sharmila sought to end when she stopped eating in November 2000. Just days after she did so, authorities were able to arrest her under an Indian law that forbids suicide attempts — and they were able to force feed her via a tube inserted through her nose.

Over the next 16 years, this pattern played out again and again, as Sharmila was arrested, force-fed, eventually released, then arrested again after continuing to refuse to eat.

Throughout that time, Sharmila became a hero in India and around the world, receiving South Korea’s Gwanju Prize for Human Rights as well as a lifetime achievement award from the Asian Human Rights Commission, in addition to other accolades.

But today, that historic fast came to an end — just as a new career for Sharmila begins. The AFSPA remains in place, but Sharmila has made it clear that she broke her fast so she can run in the Manipur state elections held in early 2017 and end the AFSPA in the political arena.

“I need power to remove this act,” Sharmila said at a press conference just after her release. “I am the real embodiment of revolution.”

Next, read up on the most inspiring one-person protests throughout history.