Spy, Murder Victim, Or Something Else? The Mystery Of The Isdal Woman 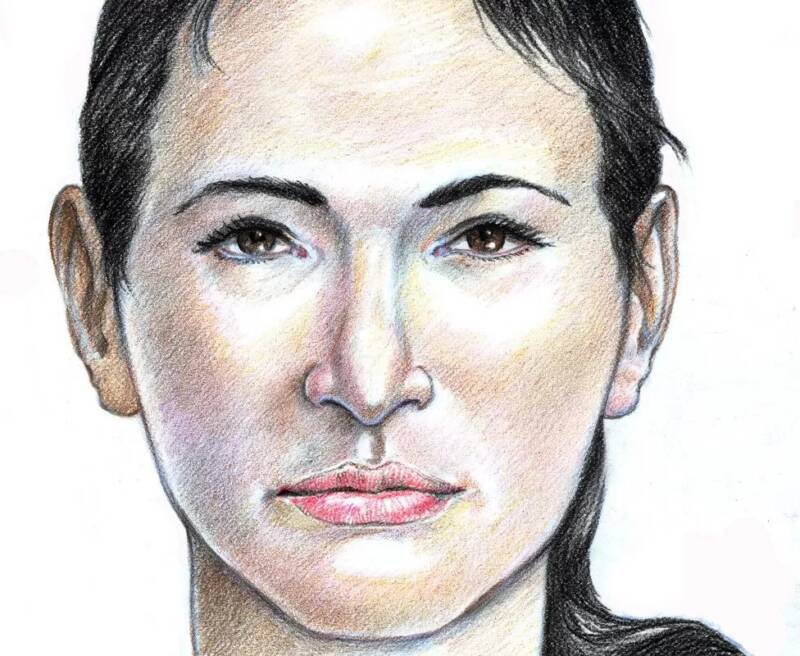 Stephen Missal/Bergen PoliceA forensic sketch of the Isdal Woman, whose body was found burnt and dead in the Isdalen Valley in Norway.

On November 29, 1970 two young girls and their father were hiking through the Isdalen Valley, a few miles outside the city of Bergen, Norway, when they came upon a horrific sight: a woman’s body lying on its back, burned beyond recognition.

The man and his daughters returned to Bergen and reported the body, but this was, unfortunately, just the beginning of what would become a decades-long mystery with more questions than answers.

In fact, the more investigators looked into the case, the stranger it became. They found a strange trail of coded messages, disguises, and fake identities but, even with DNA, failed to identify the woman.

The case of the Isdal Woman was reopened in 2016, but so far, over 50 years after her body was found, her identity remains a mystery.

Here’s everything we know about the Isdal Woman.

The Horrific Scene In Ice Valley

When police were told of the dead, burned body in the woods, a small party ventured out to retrieve it. Among them was police lawyer Carl Halter Aas — as of 2016, when the NRK reopened the investigation, he was the last living person from the party.

“The first thing we notice is the stench,” Aas said. “I remember we were walking, and sometimes climbing, up the scree slope. As we hurry along, I’m wondering where we are heading for, because it all seems so steep and impassable. This is no hiking trail, that’s for sure.”

By the time they discovered the body, a few theories had been tossed around. Some officers questioned if the woman had fallen into the flames and, in a panic, launched herself backwards. Others, of course, wondered if there was a murderer lurking somewhere in the dense forest.

“It is not a pretty sight,” Aas said. “The question is whether someone set fire to her, or if there are other causes.” 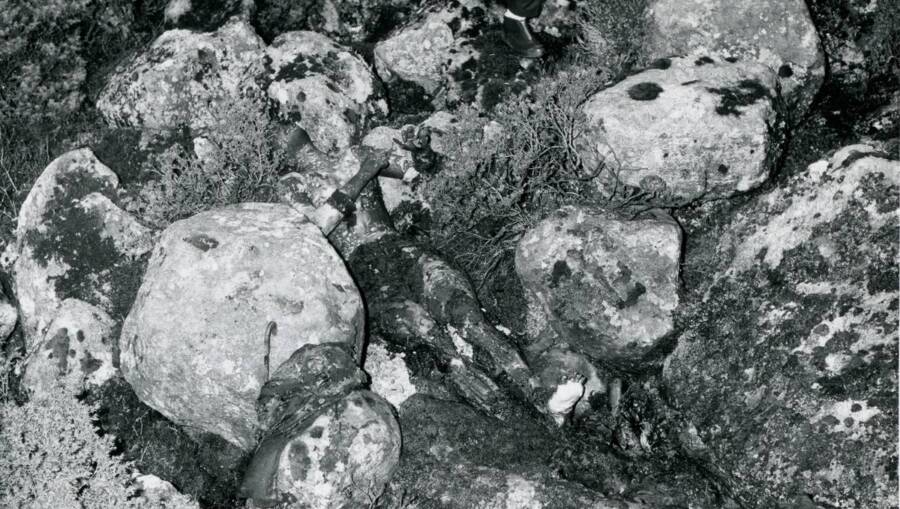 Bergen State ArchivesThe body of the Isdal Woman, lying in “boxer’s position” on the cliffside where she was found.

The body was sprawled out in a “fencer’s position,” with its arms outstretched in front of the upper body, a common position for bodies to lie after burning. Nearby, police found the charred remains of the woman’s belongings: bits of clothing, an umbrella, two melted plastic bottles, a half bottle of Kloster Liqueur, a plastic cover for a passport, and more.

But these items offered little insight into who the woman was. In fact, it seemed as if every trace of identification had been deliberately wiped clean. Manufacturing labels had been cut off the burnt clothing. There were no markings on any of her belongings — even the labels on the bottles had been removed.

Speaking with the BBC, forensic investigator Tormod Bønes noted even more strangeness with the woman’s belongings. For example, she had a watch and jewelry, but she wasn’t wearing any of it. Instead, it was placed beside her.

“The placement and location of the objects surrounding the body was strange,” Bønes said, “it looked like there had been some kind of ceremony.”

All of her clothing, too, was made of synthetic material — and she had been wearing a lot of it at the time of her death. 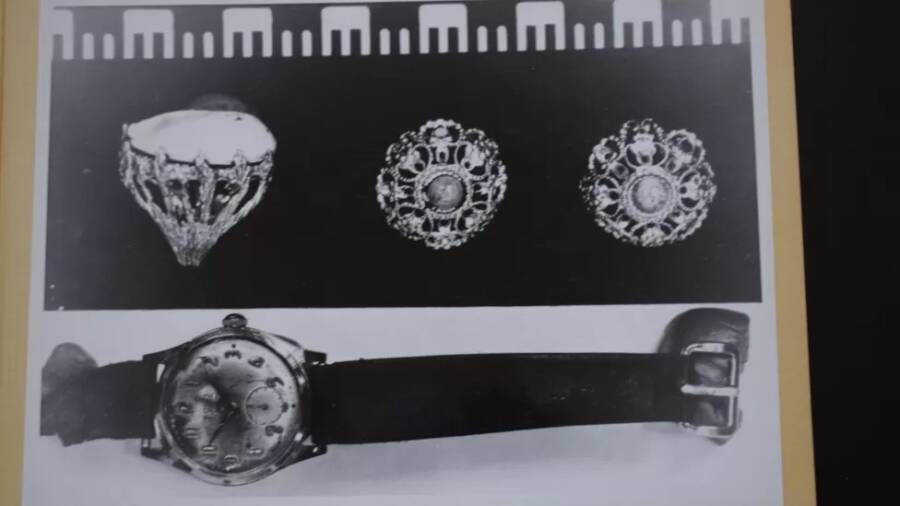 Bergen State ArchivesThe watch and jewelry discovered at the site of the Isdal Woman’s death.

Eyewitness reports also did little to help identify the woman. From what they could gather, police said the woman was around five-foot-four, aged between 25 and 40, with “long brownish-back hair,” a small round face, brown eyes, and small ears. At the time of her death, she wore her hair “in a ponytail tied with a blue and white print ribbon.”

Just who was this woman? What happened to her? And why, despite not having the answers to these questions, did the police close the case after only a few weeks?

A few days after the Isdal Woman’s body was found, police made another bizarre discovery: two suitcases left at the Bergen railway station’s luggage department. Inside one, they found prescription-free glasses — and a fingerprint on the lens that matched the Isdal Woman’s.

Finally, it seemed, they were one step closer to learning the woman’s identity. 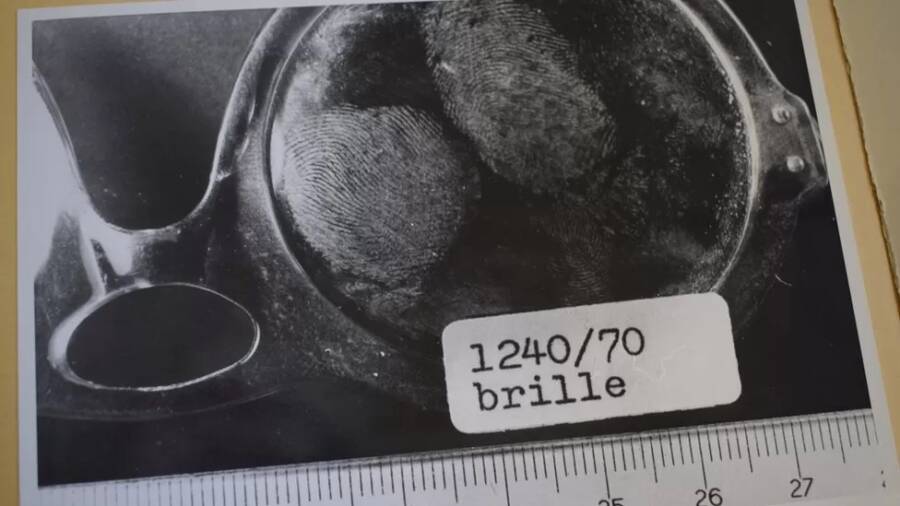 Bergen State ArchivesThe Isdal Woman’s fingerprint on a pair of glasses found among her belongings.

Alongside the glasses, police found a variety of other items including clothing, wigs, a comb, a hairbrush, cosmetics, eczema cream, teaspoons, and currency from Germany, Norway, Belgium, England, and Sweden.

But once gain, Bønes said, “all the labels that could have identified the woman, her clothes or belongings, had been removed.”

The woman’s name was scratched off the eczema cream tube; no major department stores could find a match for any of her clothing. To complicate matters further, police found a coded note among the woman’s belongings, which they cracked later, believing the codes may indicate which hotels she stayed at, and when.

Unfortunately, this did little to support rumors that the woman may have been a spy. 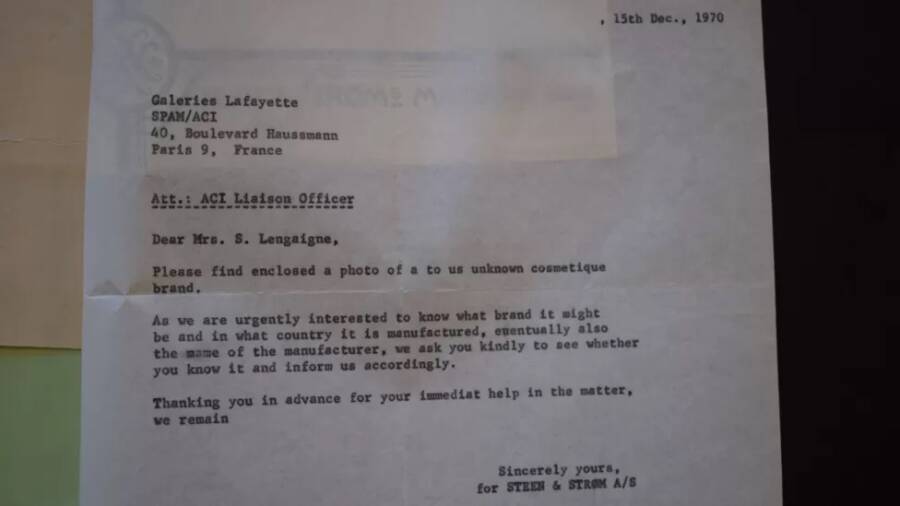 The only useful piece of evidence they found in the suitcases was a plastic bag from Oscar Rørtvedt’s Footwear Store in Stavanger. The owner’s son, Rolf Rørtvedt, recalled that he had sold a pair of boots to “a very well dressed, nice-looking woman with dark hair” who “took a long time” choosing her boots.

The boots in question, police believed, matched those found at the scene of the Isdal Woman’s death. Using this as a base point, they were able to trace her to a nearby hotel, but of course, she had checked in under a false name, Fenella Lorch.

In fact, she had stayed at a few different Norwegian hotels, but in each case she used a different alias. Sometimes, she was Genevieve Lancier. Other times, she was Claudia Tielt, or Claudia Nielsen. She also used the names Alexia Zarne-Merchez, Vera Jarle, and Elisabeth Leenhouwfr.

A waitress from one of the hotels at which the woman stayed, Alvhild Rangnes, remembered the woman. She told the BBC, “My first impression of her was one of elegance and self-assuredness… In fact, I remember her winking at me… from my perspective it felt as though she thought I had been staring a bit too much at her.” 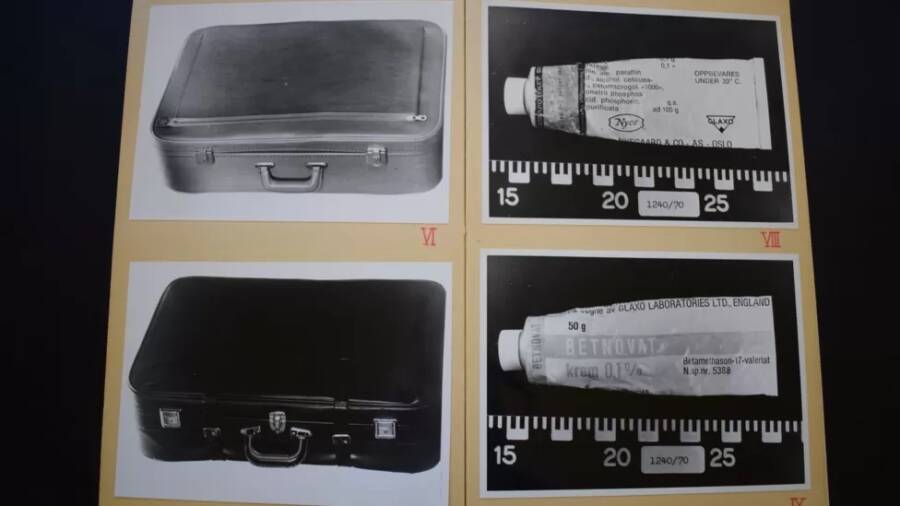 Bergen State ArchiveSuitcases and a tube of eczema cream found at the Bergen railroad station.

“On one occasion,” she added, “while I was serving her, she was in the dining hall, sitting right next to — but not interacting with — two German navy personnel, one of which was an officer.”

Still, despite all of this, police were no closer to finding out who the woman was. Eventually, the case was closed, and the mystery seemed like it may never be solved. But 46 years after her death, the case was reopened, and though her identity is still unknown, investigators are closer than ever before to solving this puzzle.

In the end, the woman’s autopsy revealed a few key things about her. She hadn’t been pregnant, for one, nor had she ever given birth. A bruise on her neck indicated that she may have taken a serious fall or a blow, but she had not been ill.

Then, “There were smoke particles in her lungs,” Bønes said, “which shows that the woman was alive while she was burning… we can state with certainty that petrol had been used.” 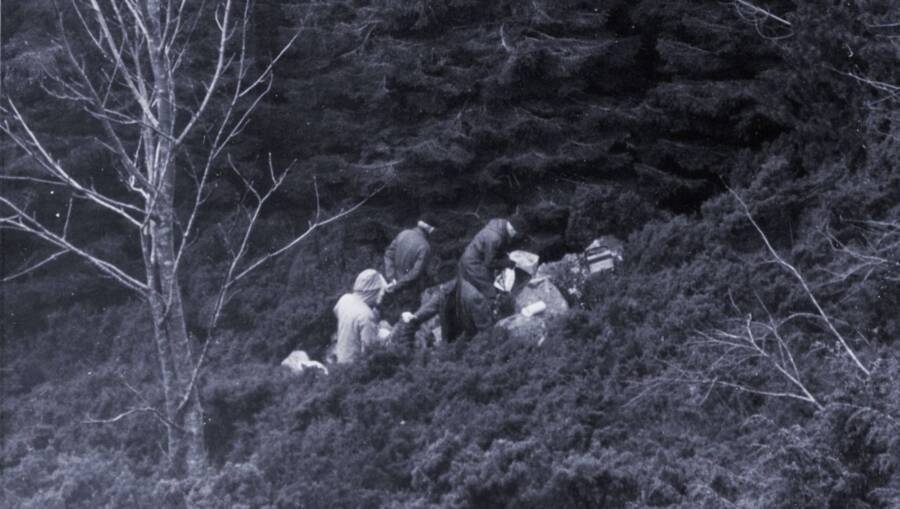 Bergen State ArchivePolice investigating the scene where the Isdal Woman’s body was discovered.

Additionally, around 50 to 70 sleeping pills were in the woman’s stomach, but they had not all been fully absorbed into her bloodstream when she died. The autopsy ultimately concluded that she died from a combination of carbon monoxide poisoning and the sleeping pills — and that she may have, in fact, committed suicide.

“We talked about it in the police, but as far as I remember very few thought it was suicide,” Aas said. “I do not believe it was suicide.”

Still, it was the closest thing they had to an answer, and so the case was closed in 1971, and the woman’s body was given a Catholic funeral attended by police officers.

But even with the case officially being closed, there were those in the force who couldn’t let it go. 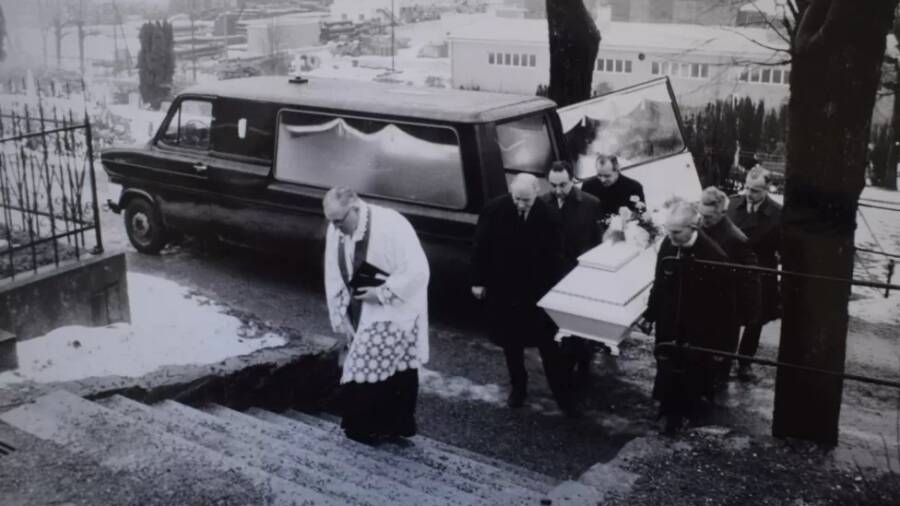 Bergen State ArchiveA photograph captured at the Isdal Woman’s funeral. All in attendance were members of the police force.

46 years later, in 2016, NRK journalists and the Norwegian Police decided to reopen the case, hoping that modern advances in forensic technology and DNA analysis might help to answer some of the lingering questions of the case: Who was the woman? Why was she in Norway? Why did she die so deep in the Isdalen Valley?

Knut Haavik is among the individuals who never accepted the suicide explanation for the case.

“Personally, I’m totally convinced that this was a murder,” Haavik said. “She had various identities, she operated with codes, she wore wigs, she travelled from town to town, and switched hotels after a few days. This is what the police call ‘conspiratory behavior.'”

But finally, many years later, scientists have created a full DNA profile of the Isdal Woman. They know that she was of European descent and are working with police forces across Europe to find a match, ideally in a close relative

As of the time of writing, however, no match has been found, and the woman’s identity remains a mystery. Only time will tell if the truth is ever uncovered.

After learning about this mysterious death, read the story of Rodney Marks, the South Pole’s only murder victim. Then, learn about the mysterious death of Roland T. Owens, and his gruesome murder in room 1046.