Ivan IV Vasilyevich rose to power in the 16th century to become the first tsar of Russia — and earned the nickname "Ivan the Terrible" along the way. 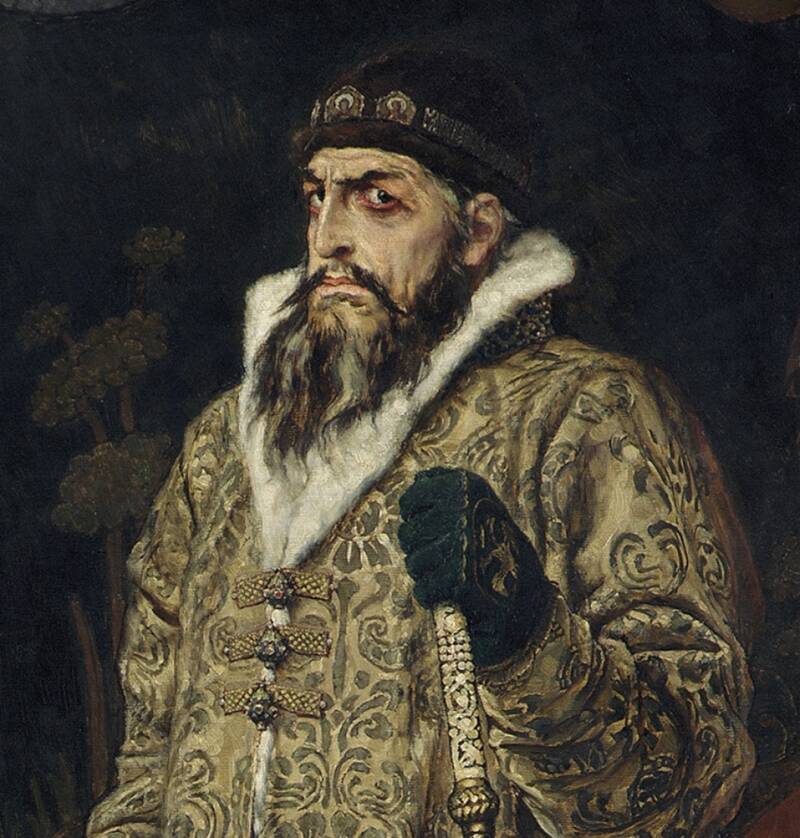 Wikimedia CommonsNobody knows what Ivan the Terrible really looked like, but artists throughout history have made him their subject.

From 1547 to 1584, Ivan the Terrible reigned as the first tsar of Russia — and made a mark on the country that still endures to this day.

Consolidating more power in the region than any ruler had ever seen before, Ivan Vasilyevich was known for waging bloody wars against his enemies and massacres against his own people. He could be especially brutal toward his family — and even killed his own son during one of his trademark rages.

In other words, it’s easy to see how he got his fearsome nickname. Of course, Ivan the Terrible didn’t live in an English-speaking country, so that meant that his title — Grozny — had to be translated. And “terrible” is the closest thing to the original meaning. But some believe that a more accurate translation might have actually been closer to this: “scary as hell.”

The Tumultuous Early Years Of Ivan The Terrible 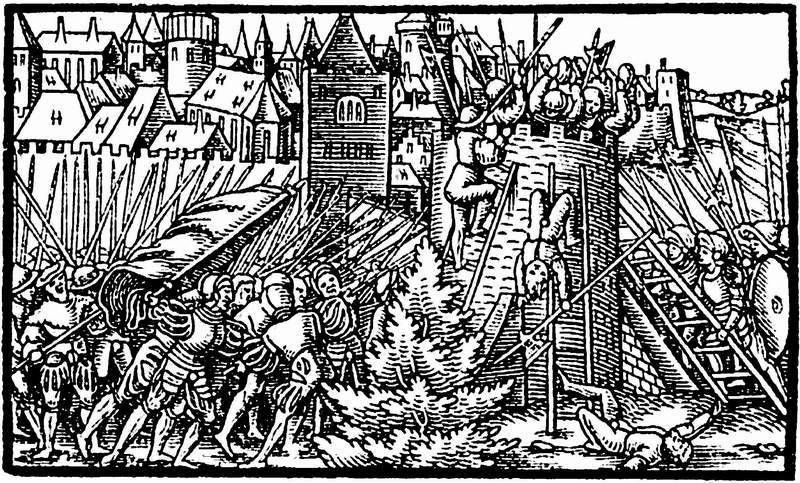 Wikimedia CommonsIvan the Terrible ruled over Russia with an iron fist — and yet was still widely supported by peasants.

Ivan the Terrible was born to Basil, the Prince of Muscovy, in 1530. In those days, Russia was a patchwork quilt of duchies and principalities, which were basically running their own live-action Game of Thrones performances.

The duty of a “prince” was mainly to collect taxes for Russia’s Mongol overlords, who ruled through violence and brutality.

Given this power structure, it’s not surprising that Russia’s nobles, known as the boyars, were more interested in looting the peasants and throttling each other than in working together to push out the declining Mongol Empire.

Since everyone who tried to do that wound up rolled in a carpet and trampled to death by ponies, it was just safer for the dukes and other gangsters to line their own pockets and protect the status quo.

In the early 1500s, there was no indication that that world was about to be blown to flinders, and even less that young Ivan Vasilyevich was going to be the one to do it, especially after the three-year-old’s father died in 1533.

How Ivan Was Abused By The Aristocracy 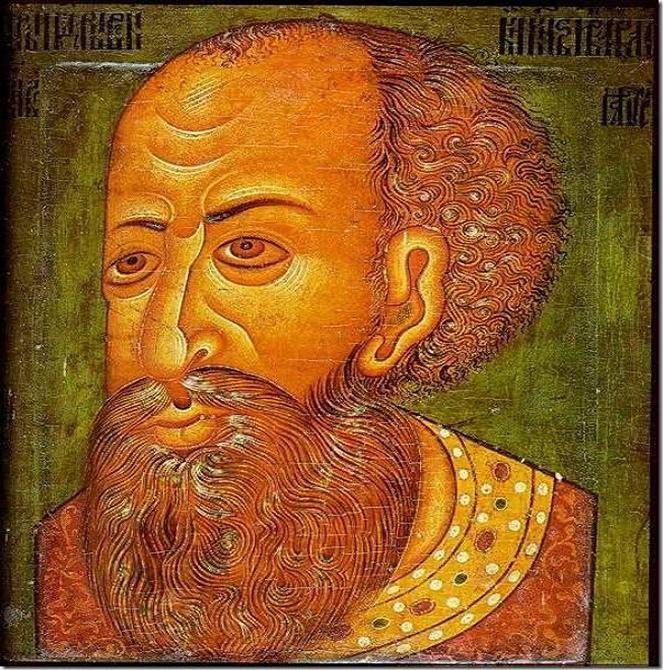 Wikimedia CommonsIvan the Terrible and his bloody reign continue to inspire artists today.

After his father’s death, Ivan was officially the Prince of Muscovy. Somewhat less officially, he was at the mercy of the local aristocracy.

These men needed the cover that having a prince provided to preserve the formality of local rule. But in reality, they weren’t planning on letting Ivan grow up to become a leader — especially not a powerful one.

That’s why, instead of seeing to his education and preparing him for the burden of the throne, they locked him in confined spaces for days at a time and beat him mercilessly with little or no provocation.

On good days, young Ivan the Terrible was restricted to the palace grounds, usually his mother’s bed-chamber — until boyars of the Shuisky and Belsky clans poisoned her when Ivan was eight years old.

Orphaned, physically weak due to malnutrition, and probably terrified out of his mind, Ivan the Terrible knew his only hope was to make friends among the boyars. It was probably those friends who arranged for Ivan to be crowned “Tsar of All the Russias” in 1547 — when he was just 16 years old.

Gradually, Ivan’s freedom of movement increased, and he started making alliances among the nobility. Then, he began to consolidate his power. 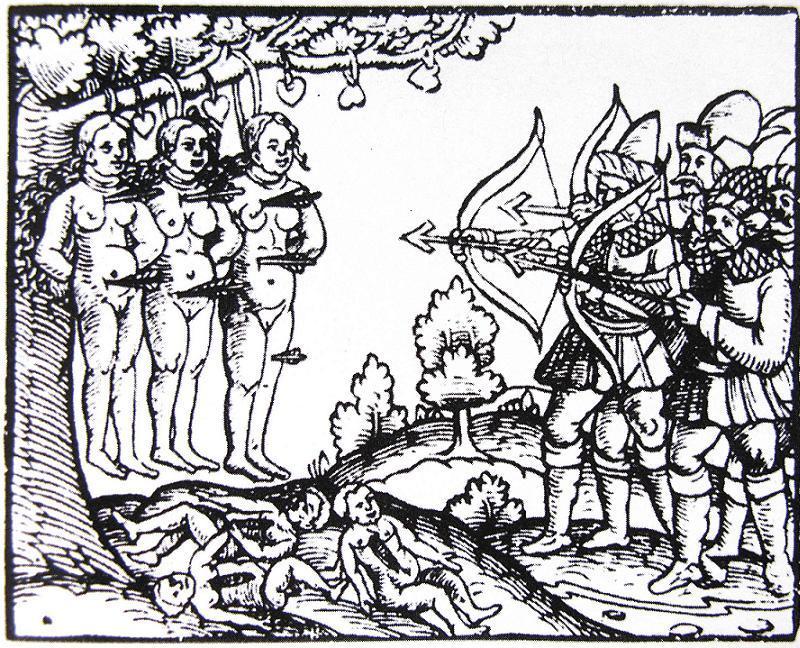 Latvian HistoryOne of many brutal war tactics, Ivan the Terrible ordered his men to use women for target practice.

The state of Ivan’s realm makes you wonder why he would even bother.

To top things off, Ivan’s first wife died in 1560 — and he believed that she had been poisoned. Shockingly, she wasn’t the only one of Ivan’s eight wives who suffered this horrible fate, allegedly at the hands of his enemies.

But his first wife’s death hit him especially hard — pushing him into a spiral of depression. With an infallible sense of timing, Prince Andrei Kurbsky chose this moment to defect to the Lithuanians, taking with him a chunk of Ivan’s army, and started laying waste to Russian territories in the northwest.

Ivan the Terrible responded to these problems in what strikes a modern person as the only sane way — he quit. In 1564, Ivan retired to his country estate and sent off a couple of public letters announcing his abdication and blaming the boyars for all of Russia’s misfortunes.

The letters were written in an archaic style, but the message was clear: “You’re on your own, Russia. Hope you like not having a tsar.”

In retrospect, the abdication seems like a cunning political gambit. By the time he quit, Ivan the Terrible had spent over a decade accumulating power, to the point that the government essentially didn’t work without him.

His high-profile flounce was probably calculated to inflame the peasantry, among whom he was popular, to push the boyars to surrender. In any event, he had his terms ready when the nobles came crawling back to him. 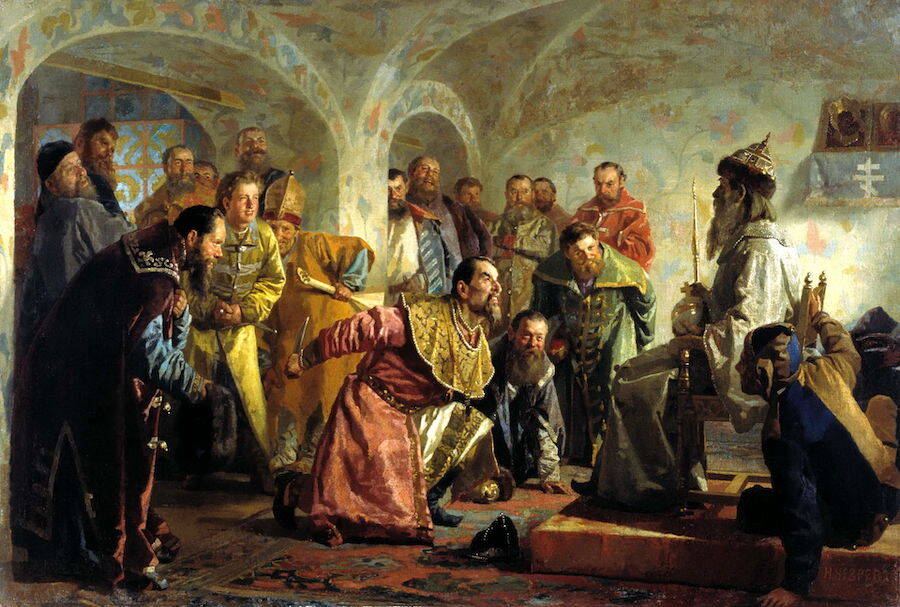 For a while, Ivan the Terrible acted as though he were reluctant to come back. But eventually, he agreed to return — for a price.

First, he wanted to be granted absolute power over life and death among the boyars, the same people who once locked him in a closet and poisoned his mother. He also demanded control of the military, sole authority over the treasury, and the power to administer the courts himself. The desperate nobles agreed, and almost immediately regretted it.

Now with unchecked power, he first set up the Oprichniki, which has been described as a 16th-century version of the SS. The members — who rode around with severed pigs’ heads on their saddles — were tasked with arresting both real and perceived enemies of the tsar.

Shockingly, the Oprichniki were also granted total immunity from all laws. This custom still persists to some degree in Russia today, where many members of the government are also immune to legal prosecution.

Second, Ivan seized the estates of accused traitors and started killing, torturing, exiling, and forcibly retiring anybody who had ever displeased him, and sometimes their kids and grandkids, too, just in case.

Fearing that the city of Novgorod might defect to the Lithuanians, Ivan sent the Oprichniki to teach everyone there a lesson. No one knows how many people were killed in the 1570 raid, as it happened when the city was suffering from an epidemic, but it was certainly in the thousands.

Two years later, having used the Oprichniki to break domestic opposition, Ivan disposed of his army of murderers by throwing them against the Lithuanians and allowing countless slaughters to unfold. Ivan the Terrible then had the few survivors either locked up or executed after the battle.

Ivan’s Unexpected Contribution To The Arts 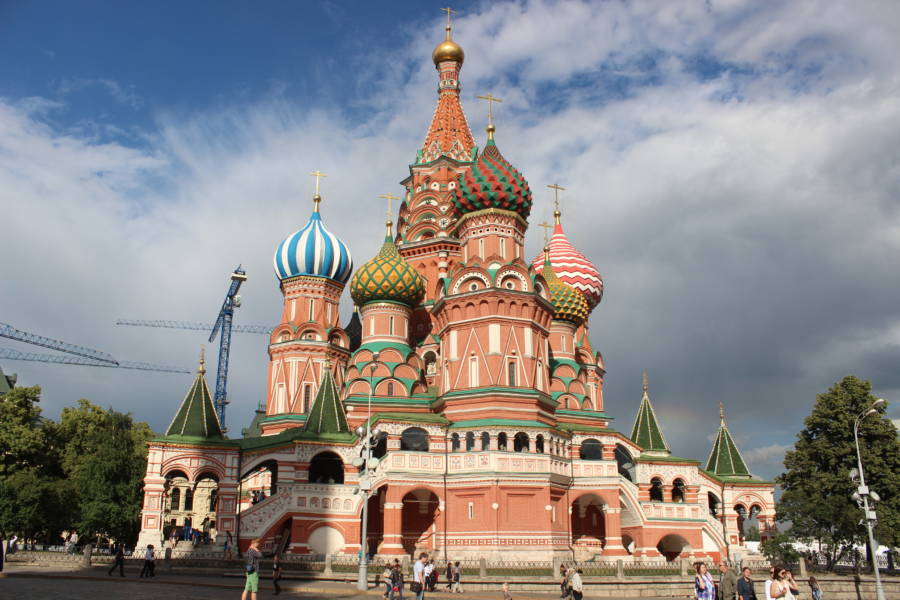 Anita Mishra/Wikimedia CommonsOne of Russia’s most famous sites, St. Basil’s Cathedral would not exist without Ivan the Terrible.

Despite his deservedly brutal reputation, Ivan the Terrible was also a dedicated supporter of the arts and contemporary culture. He even used his power to commission the construction of the Moscow Print Yard, which introduced the first printing press to the country in 1553.

The print yard initially focused on religious texts, then broadened its scope to include historical manuals. Setbacks occurred when the press was burned to the ground by a group of angry scribes who felt their livelihoods were being jeopardized. But before long, things got back on track and the Moscow Print Yard became a fully functioning printing house once again.

Ivan the Terrible was also responsible for some of Moscow’s most iconic architecture. He commissioned the beautiful St. Basil’s Cathedral, one of the most recognizable and beloved architectural sites in Moscow.

According to legend, Ivan was so impressed with his architect’s work on St. Basil’s Cathedral that he had the architect and all of his workers blinded, so they could never create anything as beautiful ever again.

Fortunately, historians have mostly decided that this story is apocryphal, especially since Ivan appears to have hired the same man to construct further architectural wonders after the famous cathedral.

Interestingly enough, Ivan himself also dabbled in the arts. He was a poet and a remarkably talented composer, as evidenced by his Orthodox liturgical hymn “Stichiron No. 1 in Honor of St. Peter.”

It seems that even in the midst of tearing things down during his reign, he also wanted to build some things up. But this would not last forever.

The Decline And Death Of Ivan The Terrible 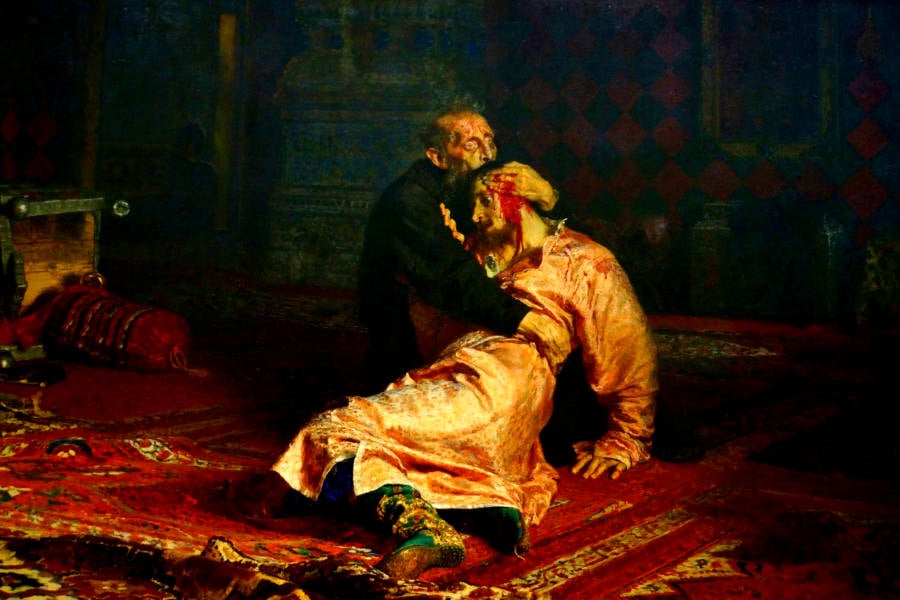 Wikimedia CommonsIlya Repin’s 1885 depiction of Ivan the Terrible’s murder of his son.

For the remaining 12 years of his reign, Ivan the Terrible seemed intent on terrorizing all 1.5 million square miles of his territory.

He led a war, on top of another war that he was already fighting, against the lingering Khanates, breaking the Tartars for good. He reorganized the church, making himself the head. And he broke the bureaucracy and rebuilt it to his liking, all while increasingly lapsing into violent rages.

During one such rage, Ivan beat his pregnant daughter-in-law hard enough to cause a miscarriage, all because he didn’t like the way she was dressed.

Ivan’s aggrieved son, who was also named Ivan, decided to confront his father. During the ensuing argument, Ivan (the father) either grabbed Ivan (the son) and threw him against a wall or struck him in the head with a scepter. Either way, the blow was hard enough to kill him.

Young Ivan’s death has been a controversial subject in recent years as some Russian nationalists have sought to cast Ivan the Terrible in a gentler light and revise his violent history. But it’s hard to dispute the evidence that Ivan was truly terrible — perhaps even more so than his name suggested.

Continuing his infamous rages until the very end of his life, Ivan the Terrible died of a stroke — which was possibly rage-induced — during a friendly chess game in 1584. Seeing as how he had killed his heir two years earlier, the crown was passed to Ivan’s mentally disabled son Feodor.

Feodor presided over the general decline of his father’s empire and died in 1598. The period that followed Feodor’s death is known as “The Time of Troubles” — ushering in yet another turbulent chapter for the country.

After learning about Ivan the Terrible, check out these stunning color photos of Imperial Russia. Then, read about Russia’s “mad monk,” Rasputin.