Archaeologists say that the vandals' metal detectors may have been triggered by pyrite, otherwise known as fool's gold. 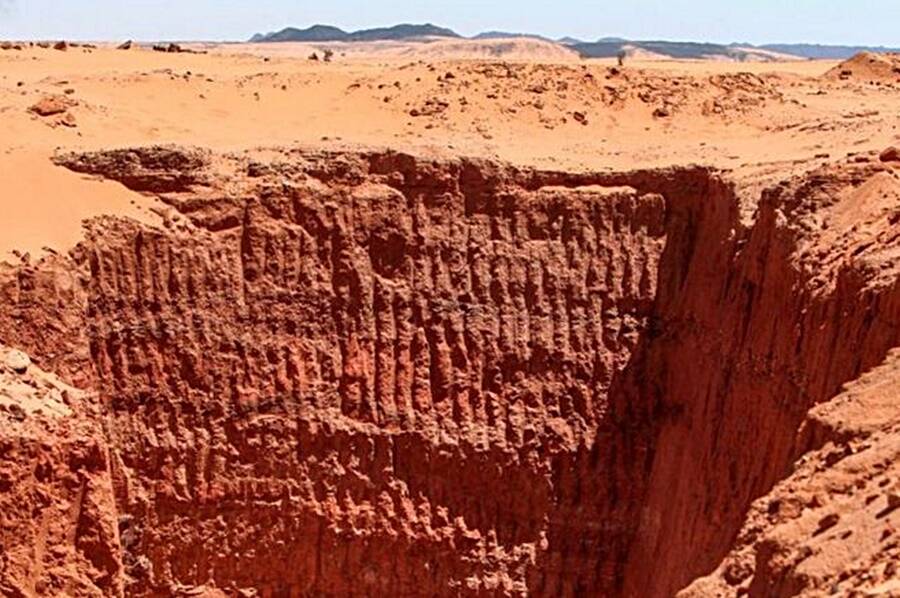 AFPIllegal miners excavated a trench that was 55 feet deep and 65 feet long at the site of a 2,000-year-old settlement.

In the the eastern Sahara desert lies the ancient remains of Jabal Maragha, which was once a small settlement in the ancient Nubian Kingdom of Kush. Recently, however, this 2,000-year-old historic site was destroyed by a gang of illegal treasure hunters who dug a massive trench there in search of gold.

According to Africa News, the gang of gold diggers used a pair of machines to dig out a giant hole that measured 55 feet deep and 65 feet long. Officials from Sudan’s Antiquities and Museums Department said that the historical site was rendered unrecognizable.

“We worked on this site for a month,” said archaeologist Habab Idriss Ahmed, who first excavated Jabal Maragha’s ruins in 1999. “At the time, it was a quiet and beautiful site, never touched by anyone. But today, when I came here, I was shocked by the way it has been destroyed.”

According to Hatem al-Nour, Sudan’s director of antiquities and museums, the treasure hunters had so thoroughly destroyed the site because the ground there is composed of layers of metallic sandstone and pyrite, which must have triggered their metal detectors. 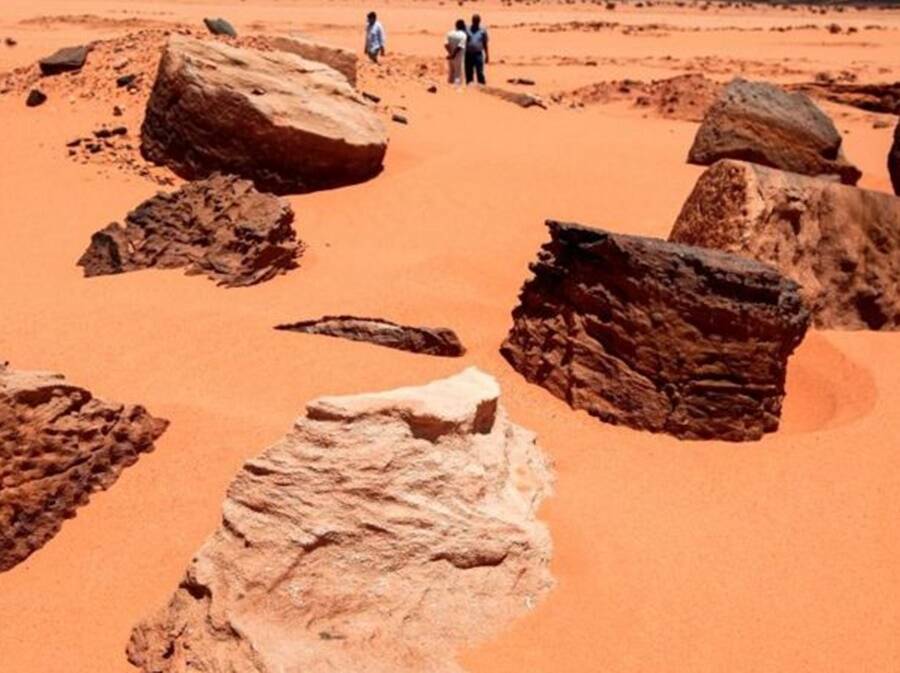 The Kingdom of Kush ruled the lands south of Egypt from 2500 B.C. to 300 A.D., during which time Jabal Maragha was in use as a checkpoint, likely between 350 B.C. and 350 A.D. Meanwhile, the kingdom’s capital of Meroë served as a robust center for culture and commerce which thrived for centuries.

Although at one point it was a colony of Egypt, the Kingdom of Kush maintained some independence due to its wealth of natural iron and gold mines nearby as well as its distance from Egypt. While Egypt suffered from the invasions of the Greeks, Persians, and Assyrians, the Kingdom of Kush was left untouched.

Around 730 B.C., the Nubian king Piye invaded and conquered Egypt, becoming the first pharaoh of Egypt’s 25th dynasty which lasted for 75 years. 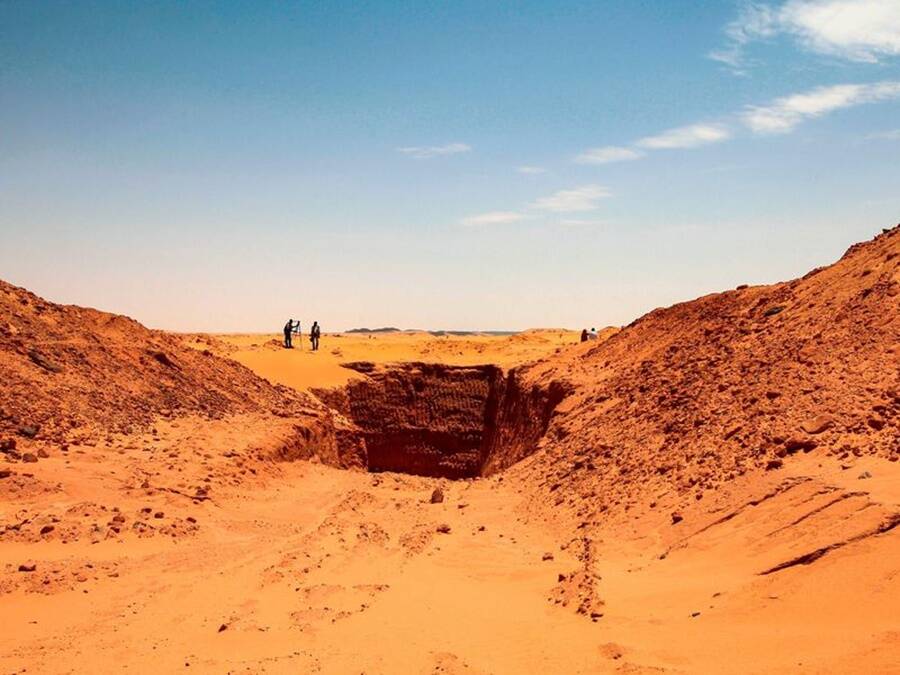 Ebrahim Hamid/AFP via Getty ImagesJabal Maragha is just the latest historical site to be vandalized by illegal gold miners in Sudan.

As a historical site, the Kingdom of Kush holds much importance. Even though the Egyptians are most known for their pyramids, the Kushites actually built more pyramids than they did. Over 200 ancient pyramids are estimated to still exist across Sudan today.

“While they are not as old or as large as the pyramids in Egypt, they are unique in that they are steeper, and they were not all dedicated to royals,” journalist Isma’il Kushkush noted.

Given the territory’s rich history and wealth of natural resources, it is no surprise that the ancient site has become a target for illegal gold miners. Indeed, this incident is not the first. At least 100 out of 1,000 well-known archaeological sites around Sudan have already been destroyed so far, especially through the use of heavy, gold-digging machinery.

“There are a lot of attempts to attack archaeological sites,” explained Hatem al-Nour. “This attack is a strong coup because this site is a rare site that contained a lot of useful information for research on the history of Sudan.” 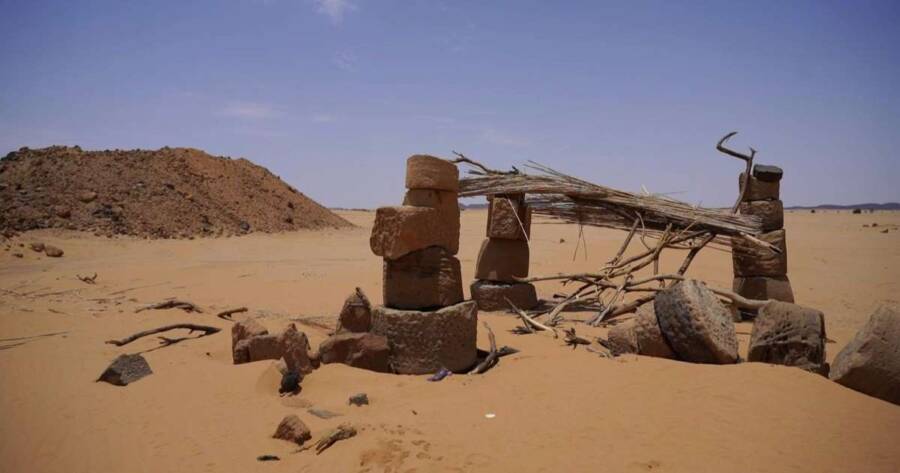 YouTubeJabal Maragha is one among many ancient sites across Sudan in danger of careless treasure hunters.

The rampant vandalism of Sudan’s ancient sites has in part been facilitated by a lack of resources to properly protect them. But it is also fueled by corruption among officials and rich benefactors who are able to fund illegal treasure hunters without consequence. In fact, according to the archaeologists, it’s not uncommon for captured bandits to be set free by authorities within hours of their arrest.

This is exactly what happened in the case of Jabal Maragha. Authorities failed to press charges, which meant that the vandals could retrieve their equipment and leave without issue.

“They should have been put in jail and their machines confiscated,” Mahmoud al-Tayeb, an expert formerly associated with Sudan’s antiquities department, reported. “There are laws.” Al-Nour added that there is one policeman for 30 sites and that he has no communication equipment or adequate means of transport.

These illegal digs have cost the Sudanese more than the price of gold. These treasure hunters have little appreciation for the ancient sites that they plunder, and as a result they have erased parts of Sudanese history that may never be recovered.

Next, read about how overweight tourists are crippling the donkeys in Santorini. Then, read about how a mining company blew up an ancient Aboriginal site — and it was totally legal.