Did James Earl Ray Really Assassinate Martin Luther King Jr. — Or Was He Set Up?

Though James Earl Ray was found guilty of murdering Martin Luther King Jr., not everyone believes that he was responsible — or that he worked alone. 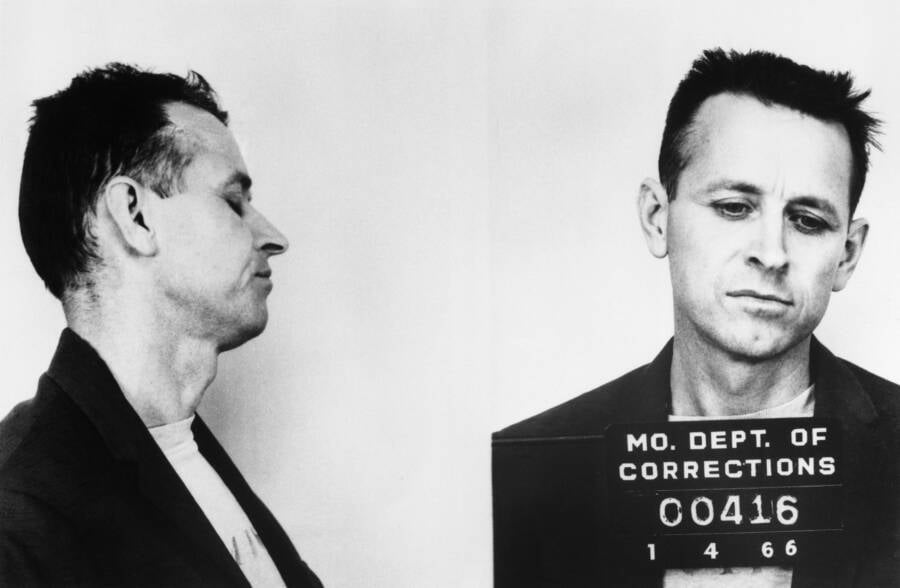 When Martin Luther King Jr. was assassinated on April 4, 1968, in Memphis, Tennessee, the United States erupted into chaos — and countless activists demanded to know who had killed the iconic civil rights leader. Soon, they seemed to have their answer. Investigators announced that James Earl Ray, an escaped prisoner, had fatally shot King.

Indeed, compelling evidence — including Ray’s fingerprints on the rifle that was later determined to be the murder weapon — seemed to point to him. And Ray even pled guilty to murdering King after he was arrested.

But Ray backed away from his confession just days later and insisted on his innocence in the decades that followed. Since then, many members of King’s family and some of his closest supporters have come to believe Ray’s story — and that a larger conspiracy had actually killed King.

So who is James Earl Ray, the man charged with assassinating Martin Luther King Jr.? And what actually happened on that terrible day in Memphis?

Born on March 10, 1928, in Alton, Illinois, James Earl Ray came from a long line of criminals. According to the New York Times, his uncle went to prison on the day Ray was born, his father was a known convict, and his great-grandfather was likely Ned Ray, a gambler and Wild West outlaw.

Indeed, Ray seemed to struggle from the start. Though intelligent, he was quick to anger. And teachers at his school — where Ray often showed up barefoot and in ragged clothes — noted that he “violated” all regulations.

His home life was no better. In 1933, Ray suffered his first real tragedy when his four-year-old sister died after playing with matches and setting herself on fire. Two years later, his father abruptly decided to move the family from Alton to Ewing, Missouri, after he was caught passing a bad check.

Ray dropped out of school around the age of 12 but had trouble making anything stick. He got a job back in Illinois at the International Shoe Company but was laid off in 1945. He enlisted in the U.S. Army but was discharged for “ineptness and lack of adaptability to military service” in 1948. 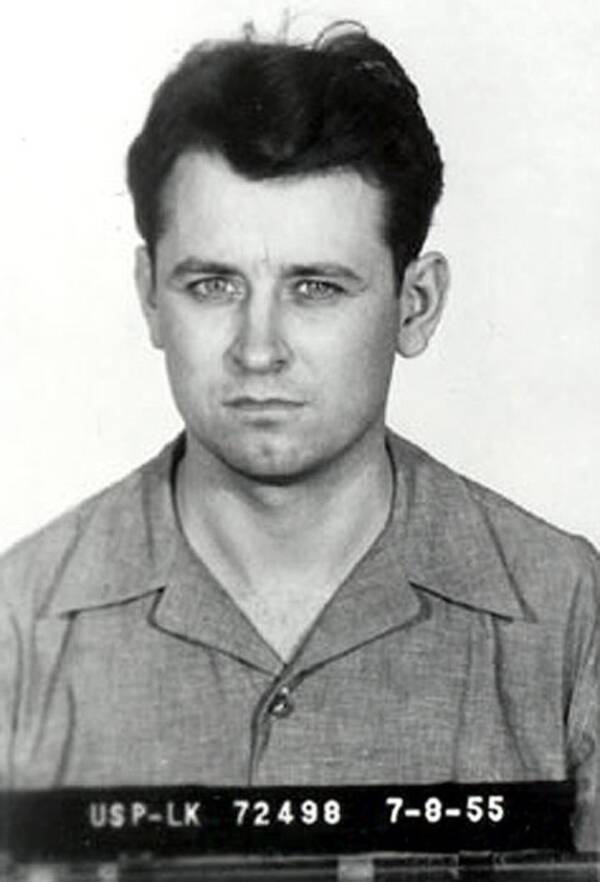 Public DomainJames Earl Ray’s mugshot from 1955. He pursued a life of crime but seemed to have been a clumsy criminal.

Eventually, Ray drifted west to Los Angeles. While there, he started a new life of crime. But Ray soon proved to be an inept criminal.

The first time he tried to steal from someone, he left behind his identification. And after he returned to Illinois and robbed a taxi driver at gunpoint for $11, police easily arrested him in a dead-end alleyway.

Despite a stint in prison, Ray continued on this path into the 1950s. He drifted around the Midwest, committing more crimes. In 1959, he was sentenced to 20 years for holding up a grocery store in St. Louis.

But while at the Missouri State Penitentiary, Ray took a fateful step. He escaped in 1967. And after passing through Canada, Alabama, Mexico, and Los Angeles, he eventually made his way to Memphis, Tennessee in April 1968. There, James Earl Ray would cross paths with Martin Luther King Jr.

By April 1968, Martin Luther King Jr. had become the face of the civil rights movement. The pastor-turned-activist had orchestrated boycotts, led historic marches, and spoken to hundreds of thousands of people in Washington, D.C. about his “dream” of a more equal country.

James Earl Ray hated him. His friends in prison remember Ray flying into a rage whenever King appeared on TV, sneering, “Somebody’s got to get him. If I ever get to the streets, I am going to kill him.”

Both Ray and King arrived in Memphis in early April. King and his associates came to town on April 3 and checked into the Lorraine Motel. The next day, Ray checked into a room in a boarding house just across the street from where King was staying, according to the Washington Post. 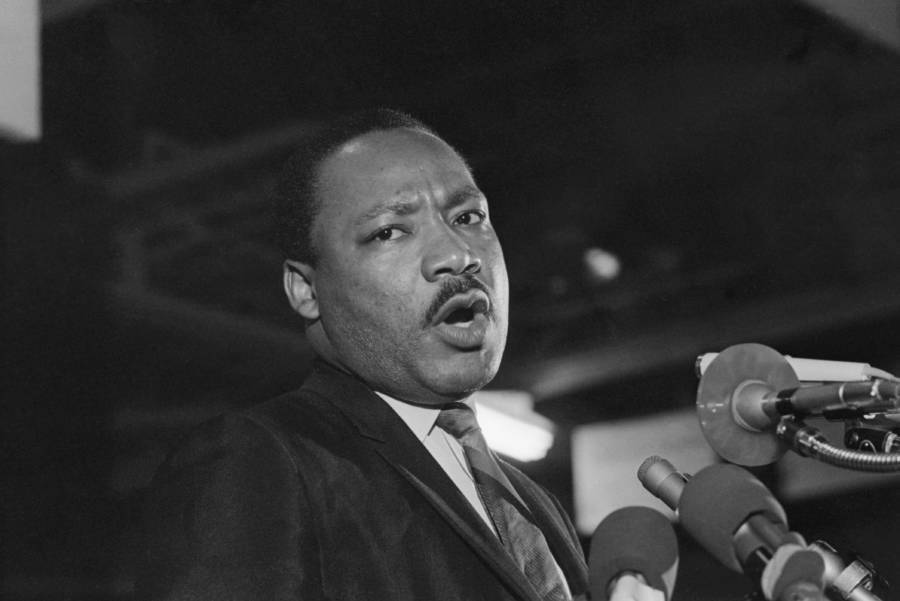 Bettmann/Contributor via Getty ImagesMartin Luther King Jr. giving his last speech, “I’ve Been To The Mountaintop,” on April 3, 1968.

As the official story goes, Ray followed through with the threat he made in prison. Authorities say that when King stood on the balcony of the Lorraine around 6 p.m., Ray spotted him from a window at his boarding house, aimed a Remington .30-06 hunting rifle toward King, and fired a shot.

The bullet whizzed through the night and hit King in the jaw, causing him to collapse. As King’s horrified associates shouted and pointed to where they thought the bullet had come from, Ray wrapped his gun in a blanket, dumped it in a doorway of a nearby building, and fled the scene.

King died about an hour later. By then, Ray was long gone. En route to America’s northern border, he would soon escape to Canada on April 6th.

The Manhunt For James Earl Ray

It didn’t take long for investigators to determine a suspect. They quickly found the rifle with Ray’s fingerprints on it. What’s more, investigators determined that a white Mustang spotted leaving the scene was registered to a Mr. Eric Galt and the gun had been purchased by a Mr. Harvey Lowmyer.

Both were aliases used by James Earl Ray.

But despite having a suspect in mind, it took investigators much longer to actually track him down. The authorities didn’t catch up to Ray until June 1968, when they found him in London trying to board a plane to Belgium.

According to The History Channel, Ray had two fake Canadian passports and an apparent plan to settle in Rhodesia, an unrecognized state ruled by a white minority in modern-day Zimbabwe. Since fleeing Memphis, he’d gone to Canada, then London, then Portugal, before returning to the U.K. 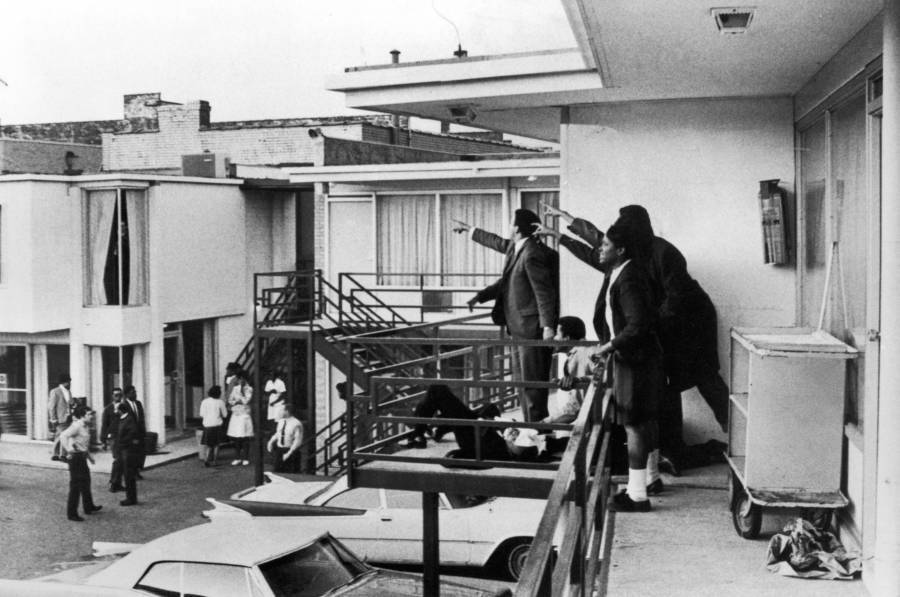 Joseph Louw/The LIFE Images Collection/Getty ImagesKing’s horrified associates point to the direction where they think the bullet came from as King lay dying at their feet.

Finally, Americans anguished over the assassination of Martin Luther King Jr. had the “who.” But what about the “why?”

To people who’d known Ray, the answer seemed obvious. His brother said that Ray admired Hitler and that Ray had said that “he would make the U.S. an all-white country, no Jews or Negroes.” Ray was also known to have been a supporter of George Wallace, the segregationist governor of Alabama running for president, according to the Los Angeles Times.

Indeed, the House Select Committee on Assassinations later speculated that Ray had killed King in order to collect a $50,000 bounty offered by Wallace supporters in St. Louis who wanted the civil rights leader dead.

But Ray offered no motive himself. He pled guilty to shooting King on March 10, 1969, to avoid the death penalty, and was sentenced to 99 years in prison.

A Recanted Confession And A Conspiracy Theory

For 72 hours after his guilty plea, James Earl Ray stayed quiet. But then, he filed a motion to withdraw his plea. And he began to tell an unsettling story.

He claimed that, as a fugitive, he had met a blond Cuban named “Raoul” or “Raul.” Ray said he worked for Raoul in a gun-running enterprise, and he bought a .30-06 hunting rifle for him in Birmingham, Alabama.

“I went to Memphis to deliver a rifle to this man called Raoul,” Ray explained to a journalist from The Tennessean. “I had met with him twice while in Memphis at Jim’s Grill, which was near the boarding house. On the night of the shooting, I had left the rifle with Raoul.”

What’s more, Ray claimed that he only pled guilty to the assassination because his lawyer and the FBI had pressed him to do so. 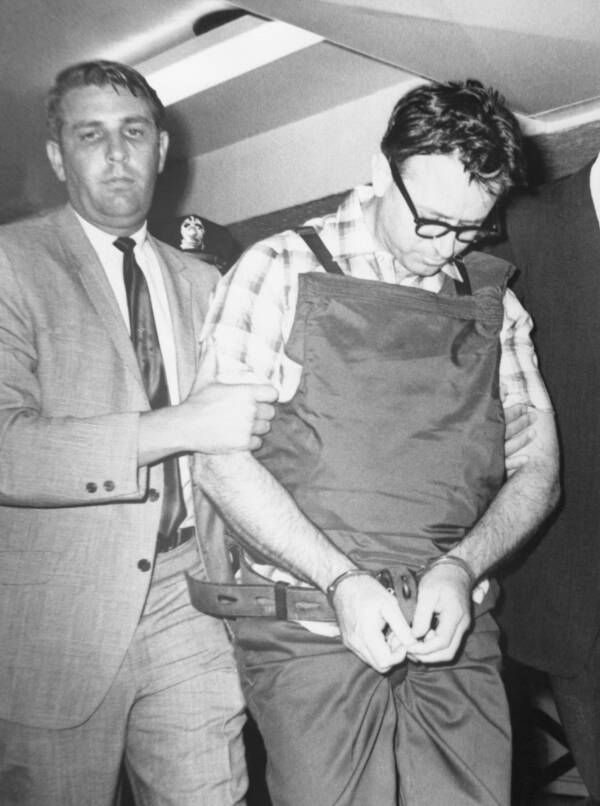 Bettmann/Getty ImagesJames Earl Ray on July 19, 1968, shortly after he was arrested for killing MLK.

The story may seem outlandish — and no one has ever definitively found “Raoul” — but King’s family and some of his most ardent supporters have come to see Ray’s story as the truth. Pointing to the FBI’s deep hatred of King, they suggest that his assassination was part of a larger conspiracy.

“There is abundant evidence of a major high-level conspiracy in the assassination of my husband,” said Coretta Scott King, King’s widow, in 1999.

Representative John Lewis, a civil rights activist who later became a U.S. congressman and served 17 terms before his death in 2020, agreed. “I think there was a major conspiracy to remove Dr. King from the American scene,” Lewis said. “I don’t know what happened, but the truth of what happened to Dr. King should be made available for history’s sake.”

Over the decades, the story twisted and turned. At one point, the owner of the bar beneath the boarding house where Ray stayed, Loyd Jowers, claimed that he had participated in a conspiracy to assassinate King. He said that a Memphis police officer was the one who had actually killed King and that Jowers had stashed the gun. Then, “Raoul” threw it in the Mississippi River.

Surprisingly, it is indeed possible that officials recovered the wrong gun at the scene. The rifle with Ray’s fingerprints didn’t create tell-tale grooves on bullets, which ballistic tests usually use to match a gun to a bullet.

But officials don’t believe Jowers’s story. They said he lacked credibility and seemed largely motivated by financial gain. And, indeed, despite Ray’s persistent denials of his guilt, his conviction has withstood multiple inquiries.

“James Earl Ray did it, case closed! Whether anybody helped him indirectly has yet to be determined. James Earl Ray was a racist.” 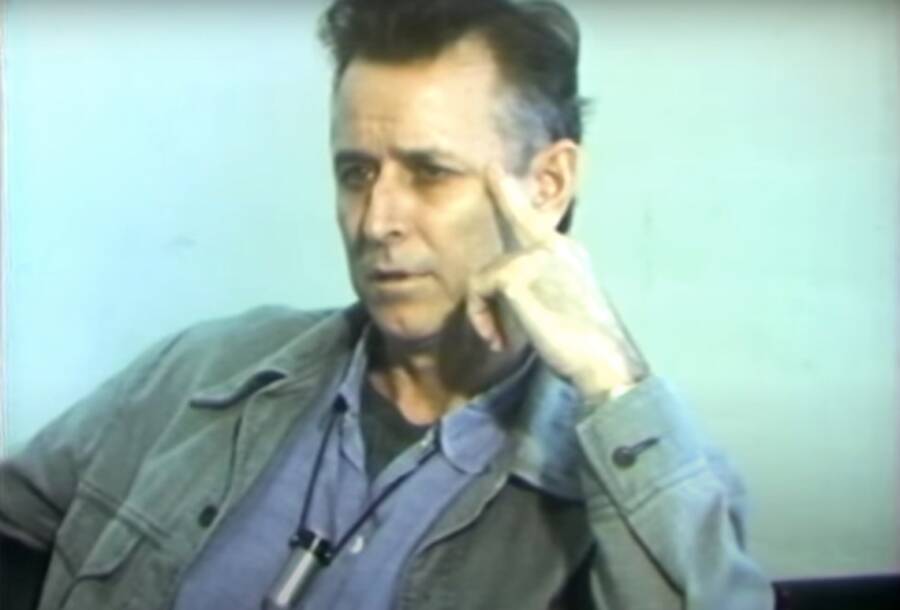 YouTubeJames Earl Ray in 1977. He maintained that he was innocent of killing MLK until his own death in 1998.

Whether he was guilty or innocent, James Earl Ray led an eventful life from behind bars. He briefly escaped from prison in 1977 and survived a murder attempt in 1981. But until the day he died of liver disease and kidney failure on April 23, 1998, he never again admitted to killing Martin Luther King Jr.

He even upheld his claims to the King family. When King’s son, Dexter, visited Ray in prison, Dexter asked Ray point-blank: “Did you kill my father?”

For now, James Earl Ray’s legacy depends on who you believe. He’s either the man who brutally assassinated Martin Luther King Jr. or a patsy who took the fall for a larger conspiracy sheathed in the shadows.