James Stern, Black Activist, Becomes President Of Neo-Nazi Group In Order To Dismantle It From The Inside

James Stern has thus far managed to convince the group's former leader to retire swastikas and other over Nazi iconography — and also to make him the group's new president and director. 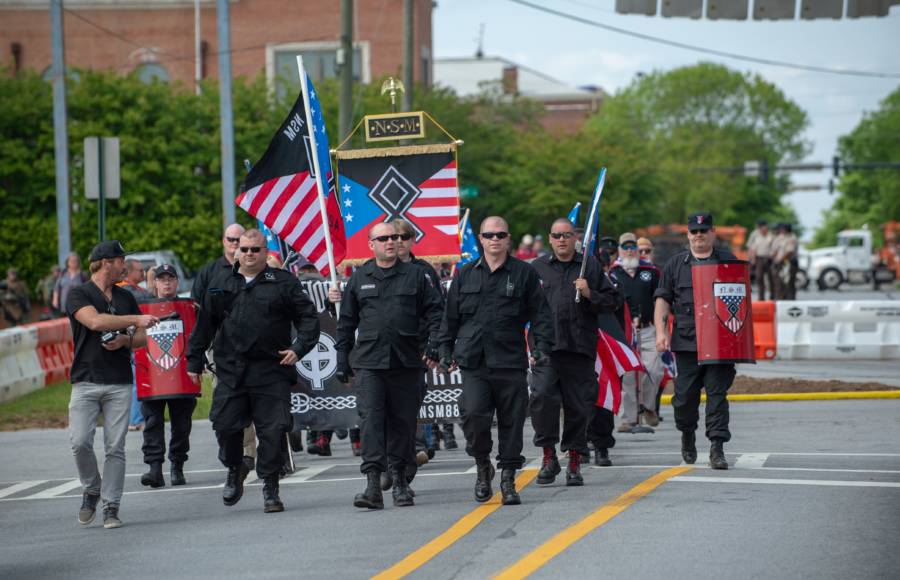 On the heels of Spike Lee’s latest film, BlacKkKlansman — a historical reimagining of a black man who infiltrates the Ku Klux Klan from within — comes a shockingly similar real-life story in Detroit. In January of this past year, the Nationalist Socialist Movement (NSM) of Detroit replaced its director and president, Jeff Schoep, with a man named James Stern — a black activist.

James Stern recently told the Detroit Free Press that he took over “for the purposes of obliterating it, getting rid of it…They are going to be destroyed.”

According to CBS News, Stern who now leads the group plans on crippling it from the inside by destroying its defense against a hefty 2017 lawsuit.

The NSM was one among numerous white supremacist groups that were sued for inciting violence at a white nationalist rally in Charlottesville, Virginia in 2017. As the new president of its Detroit faction, Stern has asked that a Virginia federal court issue a statement against the group before one of these lawsuits goes to trial in a strategic effort to weaken the group’s defenses.

Little is known about how James Stern infiltrated the group, except that he once served a prison sentence for mail fraud alongside cellmate and one-time Ku Klux Klan Grand Wizard Edgar Ray Killen. Killen had been convicted for the killings of three civil rights workers in 1964. Stern reported that he managed to convince Killen to grant him power of attorney over his estate, though those on behalf of Killen who died in 2018, deny this.

Stern says though that he managed through this connection to both dissolve a KKK group Killen once led and to become acquainted with NSM founder and president Jeff Schoep around 2014. By this time, the membership in Schoep’s organization was dwindling. Schoep started the group in 1994. The NSM would attend rallies and protests in full Nazi regalia — including the 2005 march in Toledo, Ohio which resulted in a full-fledged riot.

Through this relationship, Stern hoped he could change Jeff Schoep’s racist attitudes.

“From Day One, I always told him: ‘I don’t agree with you. I don’t like you.’ I talked to him because I wanted to hope to change him,” Stern reported. While he may not have been able to change Schoep’s character, Stern did manage to convince Schoep to dilute some of his practices within the NSM.

At the same time, the politics within the group were strained anyway, and Schoep was feeling overwhelmed with the group’s direction. Schoep had apparently been attempting to rebrand the group by removing the blatant swastikas, for instance, for a smoother, more easily digestible form of racism. Schoep had been adamant that the NSM needed to make some ideological changes while some members “essentially want it to remain a politically impotent white supremacist gang.”

An AP segment on James Stern and his mission to end the NSM.

Indeed, leading white nationalist figure and former NSM community outreach director, Matthew Heimbach, explained that Schoep and his Neo-Nazi devotees hadn’t seen eye to eye over the direction of the group in quite some time.

Stern likely realized there was no better time to become the NSM’s leader than a time of infighting between members. He posted a message on his website stating that he was meeting Schoep in February 2017 “to sign a proclamation acknowledging the NSM denouncing being a white supremacist group.”

“I have personally targeted eradicating the (Ku Klux Klan) and the National Socialist Movement, which are two organizations here in this country which have all too long been given privileges they don’t deserve,” said Stern in a video on his site.

Schoep reported that Stern ultimately convinced him to hand over leadership to the organization as having him at the helm would protect it from a lawsuit.

“Now I don’t believe any of this was true,” Schoep added, “He [Stern] has openly said that he manipulated me. What he is trying to do is put me in a lot of danger.”

Though Jeff Schoep is no longer legally affiliated with the organization, he remains involved in the Charlottesville lawsuit because he is listed as a defendant.

“It’s definitely not good for him, and it shouldn’t be good for him,” Stern said of this. “You spend 25 years terrorizing people, you can’t rebrand overnight. It doesn’t work like that.”

On Feb. 27, 2019, the lawyers suing the white supremacist groups involved in the Charlottesville violence demanded that the court sanction Jeff Schoep. The previous president had thus far ignored his obligations to turn over access to his electronic devices, social media accounts, and was withholding informative documents.
Schoep also fired his attorney seemingly in an effort to stall further proceedings. 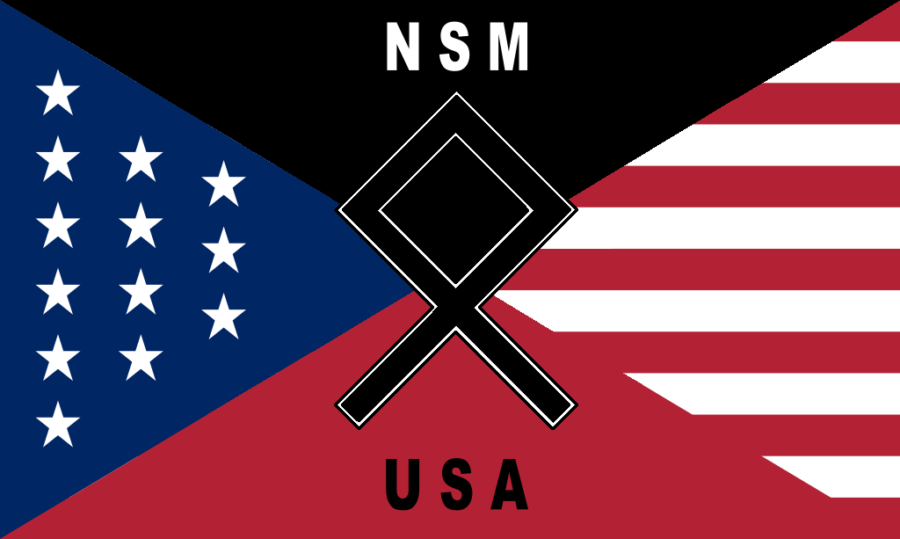 Wikimedia CommonsThe NSM flag with the Germanic Othala rune at the center.

Unfortunately, because Stern is not a licensed attorney, a federal magistrate judge in Charlottesville ruled that he cannot represent the NSM in court. Nonetheless, Stern has asked the federal court to issue a statement against the NSM and denounce it as a white supremacist group responsible for its actions.

“It is the definition of the Nationalist Socialist Movement to plead liable to all causes of actions listed in the complaint against it,” Stern wrote.

Meanwhile, members of the NSM claim James Stern is merely the group’s president on paper and that the realities on the ground are much different.

“He has not taken over the group,” said Burt Colucci, who claimed he was the new commander of the NSM. “He’s a paper tiger…He definitely needs to be removed from the organization.”

Colucci also explained that there was “no bigger enemy than Communism,” and that he plans on bringing overt Nazi iconography back into the NSM fold foregoing Schoep’s previous decision to become a more subtle group of white supremacists.

Colucci added that he had no idea Stern and Schoep had communicated about the group at all. Colucci is likely also unaware that the Schoep’s decision to stop using the swastika, for instance, was Stern’s idea from the beginning, as he likely convinced Schoep that it would help, legally, in the long-run.

Heimbach believes that Jeff Schoep’s exit from the group as well as James Stern’s installation as its leader likely meant the end of the Detroit faction. Unlike most citizens of the United States, the former community outreach director finds this very unfortunate.

“I think it’s kind of a sad obit for one of the longest-running white nationalist organizations,” said Heimbach, who said the Detroit NSM had 40 active dues-paying members in 2018. 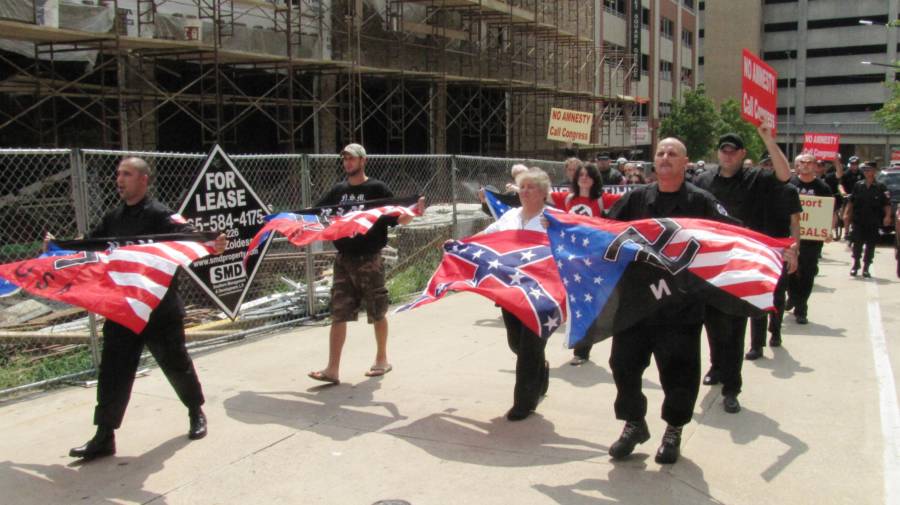 “This is a group that’s been teaching separatism, saying that blacks and whites can’t live together, can’t mate together,” James Stern concluded. “The racist belief itself is just why the group has got to go, the hate, the violence. My message is that there’s only one race, and that’s the human race.”

After this look at James Stern, the black activist who infiltrated Jeff Schoep’s Nationalist Socialist Movement in Detroit, read about Ron Stallworth, the black cop who infiltrated the KKK. Then, learn about William Walker and how he invaded Nicaragua and became its President.