Meet Mera: The Stray Dog Who Joined A Group Of Hikers On Their Grueling Himalayan Mountain Ascent

The 45-pound cross between a Tibetan mastiff and a Himalayan sheepdog managed to ascend some of the world's most challenging terrain — and is perhaps the first of her kind to do so. 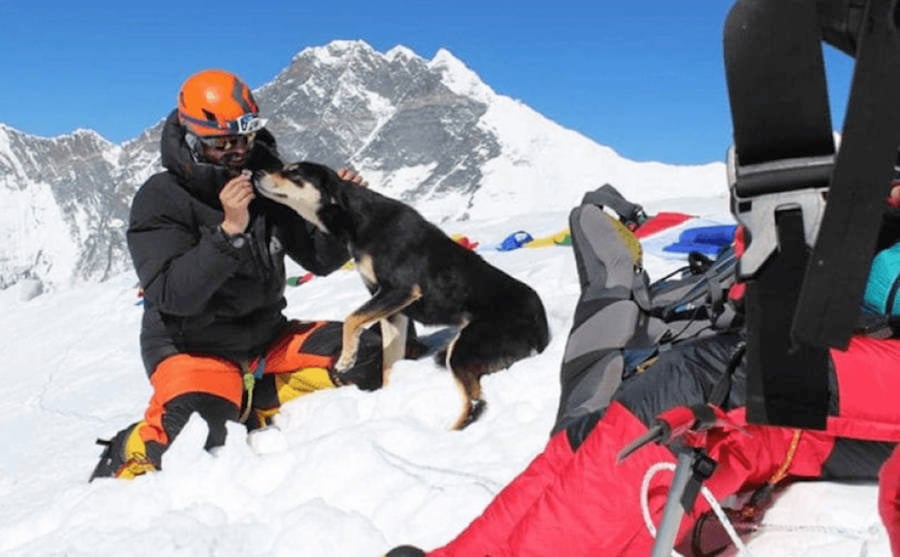 Don Wargowsky has been an experienced climber and expedition leader for years — in a sense, he’s seen it all. But when a stray dog approached his group of climbers at 17,000 feet during a challenging ascent up the Baruntse peak in the Himalayas, even for him, this was a first.

The Himalayan mountain range in Asia is home to some of the biggest peaks in the world, including Mount Everest at 29,029 feet. While Wargowsky’s expedition on the Baruntse was significantly shorter than that ascent at 23,389 feet, nobody had ever seen a dog accompany climbers this high.

According to The Independent, Mera, as the climbers named her, is believed to have become the first of her species in the world to ascend a mountain this high.

The 45-pound cross between a Tibetan mastiff and a Himalayan sheepdog joined the group of experienced climbers in November this past year as they descended from the Mera Peak summit — from which the fearless canine got her nickname.

Mera ran past every single climber and headed straight for Wargowsky. Over the course of the next three weeks, the expedition leader shared his tent with her and gave her a sleeping pad and jacket to use as a makeshift bed.

Since rabies is quite common among dogs in Nepal, people are rightfully hesitant to befriend or approach strays when they encounter them. In Mera’s case, however, her enthusiasm at following the climbers in their footsteps and making a gleeful effort to stick with them won them over immediately.

“They’d never seen anything like this happen,” said Wargowsky. “They said she was a special dog, that she brought luck to the expedition. Some even thought she was blessed.”

“One morning we got wind so bad it ripped the anchors off the tent, picked it up, and moved it a few feet. She just woke up, looked at me, and went back to sleep.” https://t.co/nyccXfm1bC

Mera did get stuck on a glacier with treacherous winds at one point and had to spend two days and nights by herself. It was at this juncture that Wargowsky was convinced she wouldn’t survive her time on the mountain.

Two sherpas had a little more faith, however, and doubled back to attempt encouraging the dog to keep trying. Fortunately, Mera complied — and crossed the challenging section with ease, falling back into the group’s fold and continuing to follow along on their trek.

During a slightly more dangerous phase of the ascent which required trekking along a ridge with “vertical snow” and drops thousands of feet deep on either side, Wargowsky tied Mera up at base camp. It was for her own safety, but the eager dog chewed through the rope and successfully caught up with the group in under an hour.

At the following base camp, Wargowsky and Mera once again shared a tent and even rationed meals Wargowsky had packed with careful planning.

When the expedition left the final base camp to set out for the mountain’s peak at 2 a.m., Wargowsky left Mera asleep in his tent. The dog rested until morning and upon waking, traveled across terrain that took the climbers seven hours in a mere two.

Once again, the group was whole, united with this unexpected stray that had become a totem of their luck, success, and fortitude. Mera ran ahead of everyone when they reached their final ridge, even while the climbers were weakened by the thin air and -4F degree temperatures.

“It was the coldest my feet have ever been,” Wargowsky commented. But there was Mera, trotting along, and sometimes even running.

“I’d never been on top of something like that with a dog,” said Wargowsy of this rare expedition. “She was leaning up against me and wanting to be petted. It was pretty surreal.”

In the end, Wargowsky tried to take Mera with him but wasn’t allowed to fly the animal out of Nepal. “Back on the trail, walking toward home, it dawned on me: we’d have to go back to Lukla and leave Mera on the street,” Wargowsky recalled. “I was sick about it. I told Kaji it was breaking my heart to think of leaving her. He said, ‘No way, she’s special. She’s coming with me.'”

Because Mera couldn’t fly, the team’s base camp manager, Kaji, paid someone $100 to walk three days to Lukla the mountain airport to deliver Mera. Kaji has since renamed Mera Baru, for the Baruntse. Baru likely continues her jolly journeys of joining random groups of climbers up the mountains.

Next up, watch the moment hikers discovered George Mallory’s body on Mount Everest. Then, learn the Everest survival story of Beck Weathers. Finally, learn about Balto, the dog hero who saved an Alaskan town.