How Did Joan Of Arc Die? Inside Her Grisly Demise While Being Burned At The Stake

After leading France from the brink of defeat during the Hundred Years' War, Joan of Arc was captured and put on trial for heresy by the English — then burned at the stake. 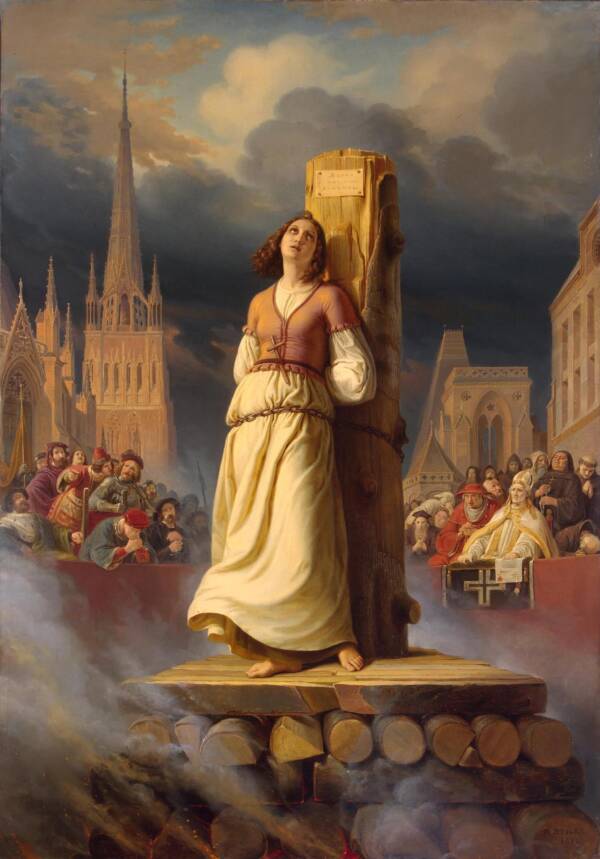 Joan of Arc didn’t set out to become a martyr. But as the teenage French warrior faced death at the hands of her persecutors in the English-occupied town of Rouen, France on May 30, 1431, she surely came to accept that unenviable honor.

A sympathetic English soldier, moved by her plight, had promised to kill her by strangulation — a strange mercy, but one far preferable to burning to death. But Bishop Pierre Cauchon, head of the absurd show trial, would have none of it: Joan of Arc’s death was to be as terrific as her tormentors could manage.

To this day, the story of how Joan of Arc died remains as horrific as it is tragic. From the story of why she was burned at the stake to why she was put to death in the first place, Joan of Arc’s death is a harrowing moment in history that has lost none of its terror even after some 600 years.

Joan Of Arc’s Heroics As A Teenage Warrior

Aspects of the triumphs and trials of Joan of Arc resonate to modern ears as pure myth. Unlike the lives of many saints, however, the Maid of Orléans boasts a voluminous legal transcript as proof of not only her existence — but her remarkable short life.

By Joan’s account, she was frightened when, as the 13-year-old daughter of a peasant farmer, she first she encountered Saint Michael. Later on, she would be visited by Saints Margaret, Catherine, and Gabriel.

She did not question their reality, nor their authority, even as their commands and prophesies became more and more incredible. First they told her to go to church often. Then they told her that she’d one day raise the siege of Orléans. 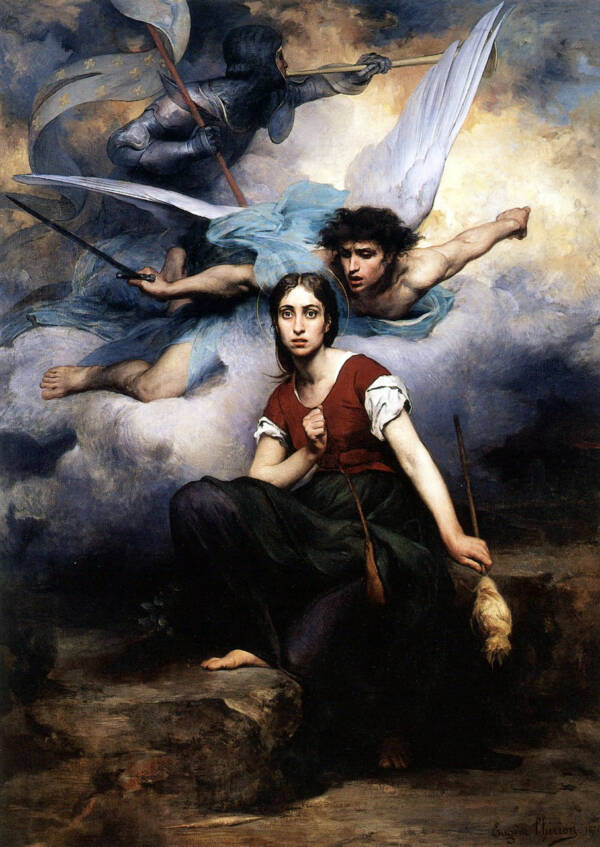 Women did not fight in battle in 15th-century France, but Joan would indeed come to command an army to restore the rightful king.

The Hundred Years’ War, a contest for control of France, had already been grinding on for generations. The English and their allies from Burgundy held the north, including Paris. Charles, France’s claimant to the throne, held court in exile at Chinon, a village 160 miles southwest of Paris.

A teenager, Joan began her campaign by petitioning a local knight, Robert de Baudricourt, in the province of Lorraine, to accompany her to meet with the heir apparent. After an initial refusal, she won their support and arrived in Chinon in 1429 at age 17 to declare her intentions to Charles.

He consulted with advisors, who ultimately agreed that Joan could be the very woman prophesied to liberate France.

The English and Burgundians were besieging the city of Orléans. Joan, given armor and soldier’s attire, accompanied the French army on April 27, 1429 as they went to rescue the city. 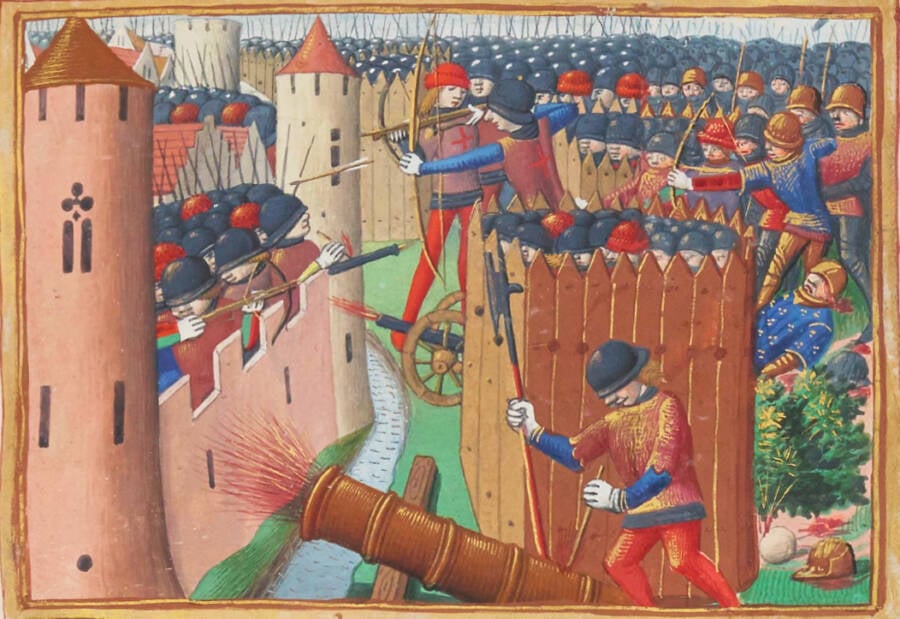 The commanding officers considered the aggressive offense Joan called for too risky. But she won them over and led a bold assault on the enemy, enduring multiple injuries.

Under Joan’s leadership, the French liberated Orléans by May 8, and she became a heroine. A succession of victories followed as Joan cleared the way for the Dauphin’s coronation as Charles VII at the ancestral capital of Reims.

The newly crowned monarch wanted to flip Burgundy to his side, but Joan was impatient to take the fight to Paris. Charles reluctantly granted her one day of battle and Joan took up the challenge, but here the Anglo-Burgundians soundly beat back the Dauphin’s forces.

Joan did lead one successful campaign that fall. But the following May, while she defended the town of Compiègne, the Burgundians took her prisoner. 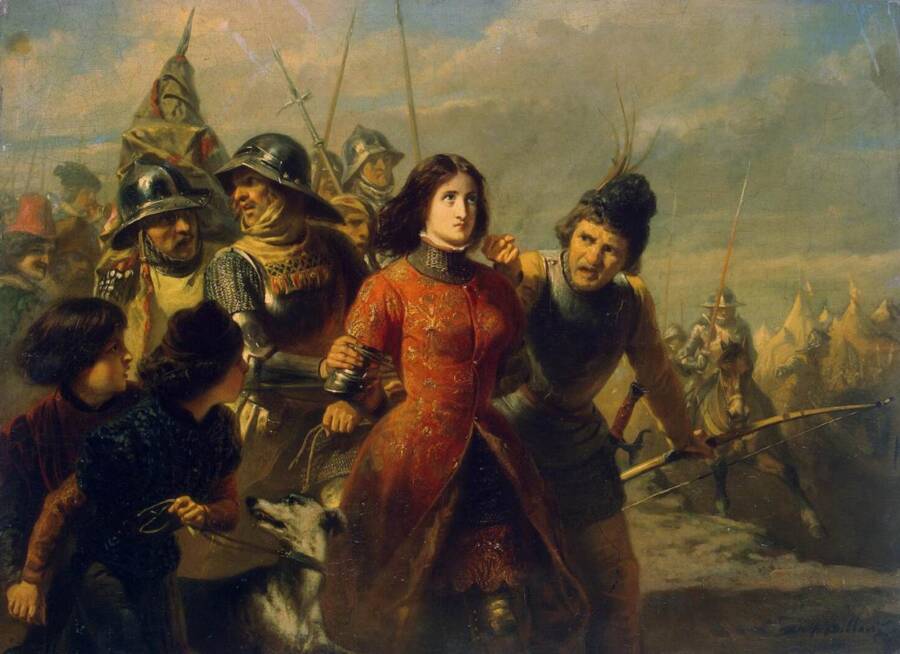 The Sham Trial That Preceded Joan Of Arc’s Death

Burgundy sold Joan of Arc to their allies, the English, who put her before a religious court in the town of Rouen, hoping to kill her once and for all.

Contrary to church law, which stipulated that she should have been held by ecclesiastical authorities under the guard of nuns, the teenaged Joan was kept in a civil jail, watched by men whom she had good reason to fear.

The trial began in February 1431, and the only question was how long it would take the prejudiced tribunal to find an excuse for execution. 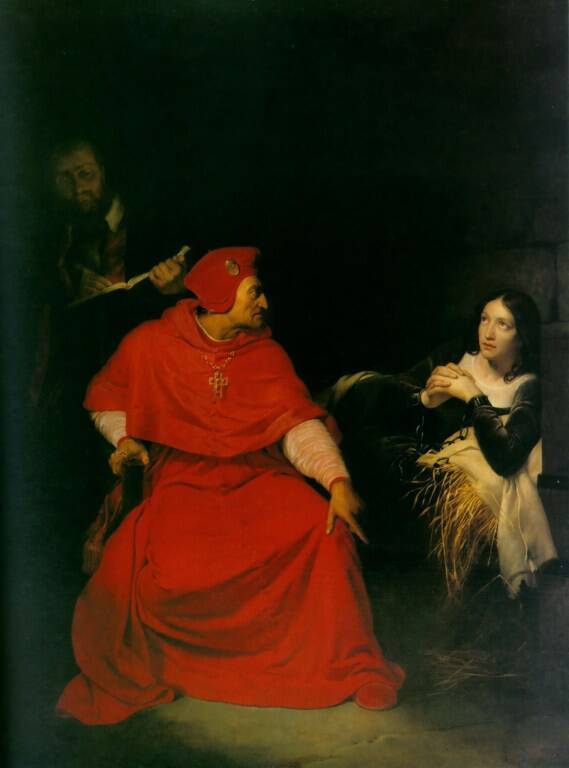 Public Domain/Wikimedia CommonsJoan of Arc is interrogated by the cardinal of Winchester in her prison, by Paul Delaroche. French, 1824. Musée des Beaux-Arts de Rouen.

England could not let Joan go; if her claims of being guided by the word of God were legitimate, then so was Charles VII. The list of charges included the wearing of men’s clothes, heresy, and witchcraft.

Before any proceedings, nuns were sent to examine the woman who called herself La Pucelle — The Maid — for physical evidence that could contradict her claim of virginity. To the court’s frustration, her examiners declared her intact.

To the surprise of the magistrates, Joan put up an eloquent defense. In one famous exchange, the judges asked Joan if she believed she had the grace of God. This was a trick: if she said she did not, it was an admission of guilt. To answer in the affirmative, however, was to presume — blasphemously — to know the mind of God.

Her inquisitors were stupefied that an illiterate peasant outmaneuvered them.

They asked her about the charge of wearing men’s clothes. She averred that she did, and that it was proper: “While I have been in prison, the English have molested me when I was dressed as a woman….I have done this to defend my modesty.”

Concerned that Joan’s compelling testimony might sway public opinion in her favor, the magistrates moved the proceedings to Joan’s cell.

How Did Joan Of Arc Die And Why Was She Burned At The Stake?

Unable to move Joan to recant any of her testimony — which by all accounts was evidence of her extreme piety — on May 24, officials took her to the square where her execution would take place.

Faced with the immediacy of the punishment, Joan relented and, although illiterate, signed a confession with assistance. 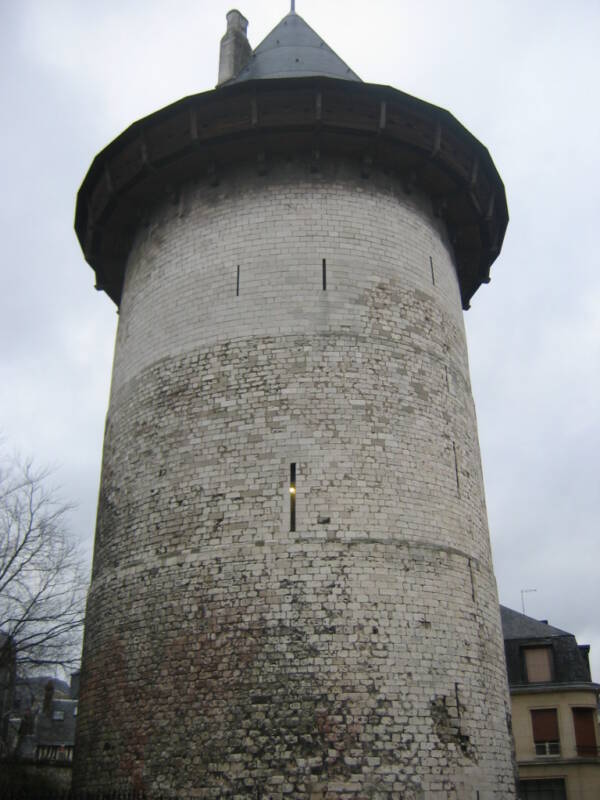 Wikimedia CommonsThe keep of Rouen Castle, called Tour Jeanne d’Arc, was the site of one of Joan’s interrogations. She was imprisoned in a nearby building that’s since been demolished.

Her sentence was commuted to life in prison, but Joan was again faced with the threat of sexual assault as soon as she returned to captivity. Refusing to submit, Joan returned to wearing men’s clothing, and this relapse to supposed heresy provided the excuse for a death sentence.

On May 30, 1431, wearing a small wooden cross and with her eyes fixed upon a large crucifix held aloft by her defender, The Maid of Orléans prayed a simple prayer. She uttered the name of Jesus Christ as the flames scorched her flesh.

One person in the crowd moved to throw additional kindling onto the fire, but was stopped where he stood and collapsed, only later to understand his error.

At last Joan of Arc was silenced into death by the smoke in her lungs, but Cauchon would not be satisfied merely to kill the target of his enmity.

He ordered a second fire to burn her corpse. And still, it’s said, within her charred remains, her heart lay intact, and so the inquisitor called for a third fire to obliterate any traces.

After that third fire, Joan’s ashes were thrown into the Seine, so that no rebel could hold onto any piece as a relic. 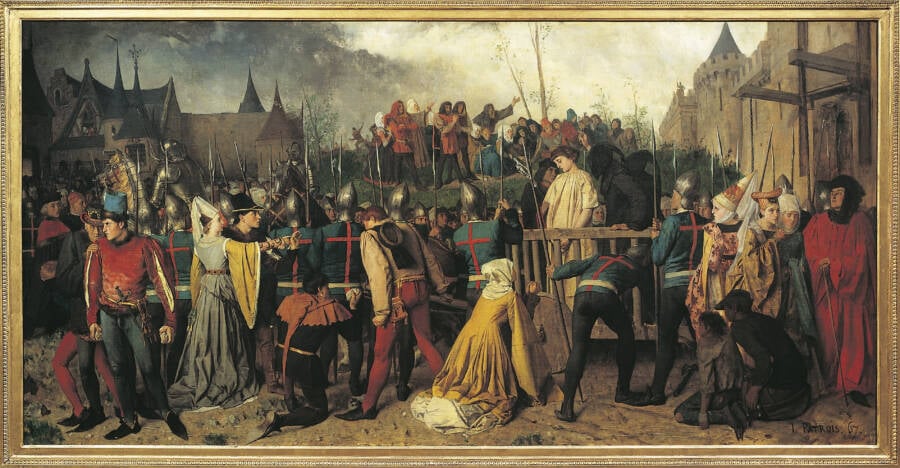 The Legacy Of Joan Of Arc’s Death To This Day

If Charles VII had made any attempts to rescue the 19-year-old mystic who had enabled his coronation, as he would later claim, they were not successful. He did, however, arrange for Joan of Arc’s posthumous exoneration through an exhaustive retrial in 1450.

He had much to thank her for, after all. The accession of Charles VII, through the intercession of Joan of Arc, marked the turning point in the Hundred Years’ War. In time, Burgundy would abandon the English to ally with France, and, save the port of Calais, the English lost all possessions on the continent.

Even during Joan’s brief public life, her fame spread around Europe, and in the minds of her supporters she was already a holy personage upon her martyrdom. 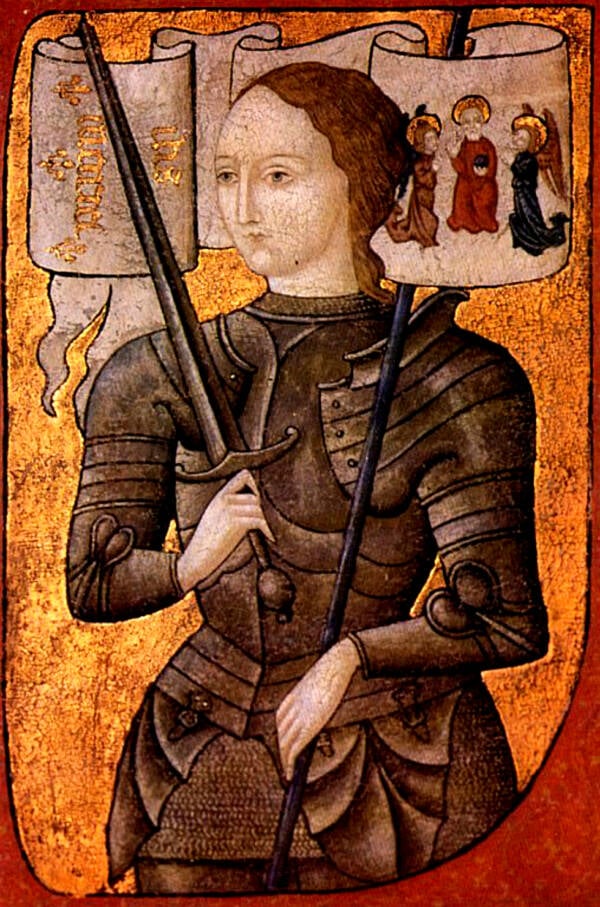 French writer Christine de Pizan composed a narrative poem about the woman warrior in 1429 that captured the public’s admiration of her, before her imprisonment.

Incredible stories had it that Joan of Arc had somehow escaped execution, and in the years following her death an impostor claimed to perform miracles in a theatrical act. Witnesses at Rouen were said to have successfully absconded with her remains.

In the 19th century, interest in the legacy of Joan of Arc came to the fore upon the discovery of a box said to contain these remains. Testing in 2006, however, came up with a date inconsistent with the claim.

French, English, Americans, Catholics, Anglicans, and people of diverse and contrary ideologies all came to revere the anomalous peasant girl canonized in 1920 as Saint Jeanne d’Arc.

To this day, Joan of Arc’s inspiring legacy is a testament to the power of courage, resolve, and unimaginable strength in the face of relentless pressure.

After reading about Joan of Arc’s death and the sham trial that preceded it, take a look at 11 women warriors of the ancient world. Then learn all about the life of Charles-Henri Sanson, the royal executioner of 18th-century France.