Who Was JonBenét Ramsey’s Father And Why Was He Once A Suspect In Her Murder?

On the day after Christmas in 1997, John Ramsey found his six-year-old daughter JonBenét dead in the family basement with duct tape across her mouth and a garrote around her neck, mere hours after reporting her missing. 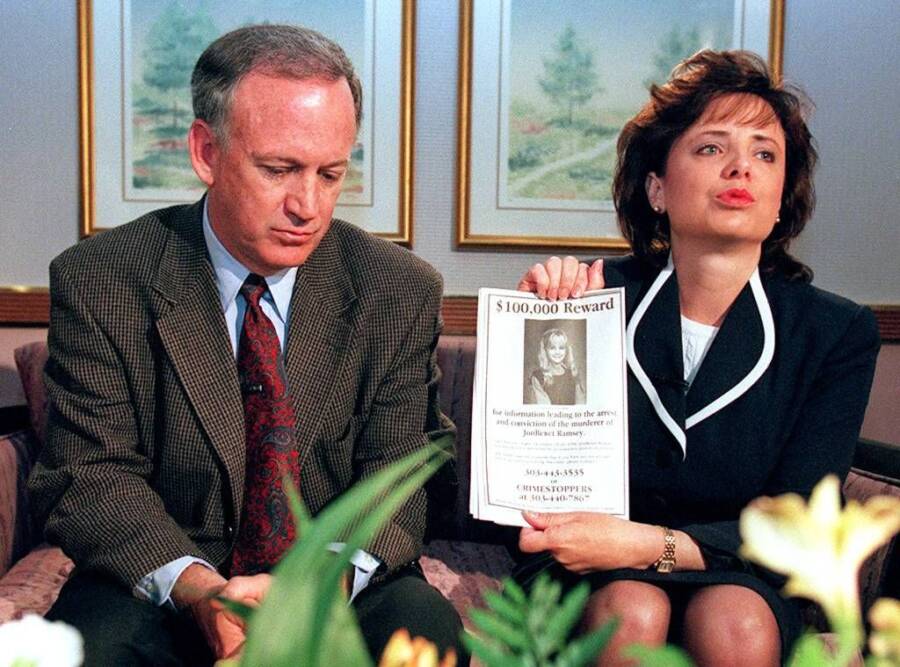 Pinterest John Bennett Ramsey sits next to his wife, Patsy, as they plead for information about their daughter, JonBenét Rmasey’s, death.

When John Bennett Ramsey and his wife, Patsy, had their daughter in 1990, they decided to name her after John — JonBenét. But JonBenét’s life was tragically cut short in 1996 when the child pageant star was found strangled in her parents’ basement.

From that moment on, John and Patsy’s life became a whirlwind of nosy tabloid reporters, suspicious cops, and overwhelming grief. Until Patsy’s death in 2006, the parents spent their days batting against accusations that they’d killed their child.

So who is John Ramsey? And why did Colorado police suspect for so long that he was involved in his daughter’s death?

John Ramsey’s Life Before The Murder

Born on Dec. 7, 1943, John Bennett Ramsey lived most of his life far from the spotlight that would later consume his family.

He spent his early years in Nebraska but moved to Michigan in the sixth grade. There, he attended Michigan State University, where he studied electrical engineering and met his first wife, Lucinda Lou Pasch.

The next few years of his life revolved around Naval service and his growing family. He and Lucinda had three children, Elizabeth, Melinda, and John Andrew, before divorcing in 1978.

And, from there, Ramsey’s life began to change dramatically. In 1980, when he was 36, he married 23-year-old Patsy, and he started to grow a business out of his garage known as Advanced Product Group.

As Ramsey’s company grew, so did his family. He merged Advanced Product Group with two other companies to form Access Graphics, which he sold to Lockheed Martin for millions. At the same time, he and Patsy welcomed both a son, Burke, in 1987, and a daughter, JonBenét, in 1990. 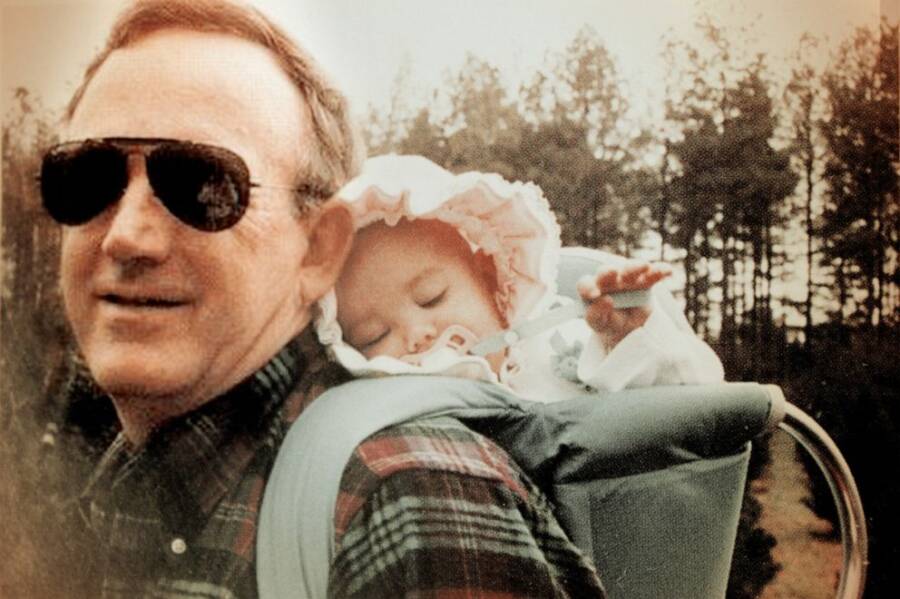 John RamseyJohn Ramsey with JonBenét Ramsey shortly after her birth in August 1990.

By the end of 1996, life seemed good for John Ramsey and his family. “Dear Friends and family, It’s been another busy year at the Ramsey household,” Patsy wrote in the family’s Christmas card.

She shared how Burke “shone” at math and spelling and how pageant star JonBenét was named “America’s Royale Tiny Miss … and is Colorado’s Little Miss Christmas.”

But on the day after Christmas, John Ramsey’s life — and the lives of Patsy and Burke — would change forever. That day, the family allegedly woke up to find a ransom note and their daughter missing from her bed.

The Death Of JonBenét Ramsey 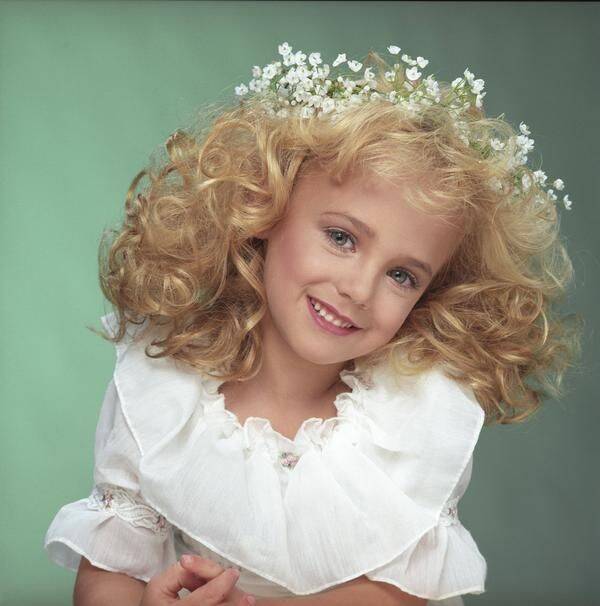 FacebookJonBenét Ramsey was a six-year-old child pageant star when she was murdered in December 1996.

The night before JonBenét Ramsey’s murder, the entire Ramsey family attended a Christmas Day party at a friend’s house.

“JonBenét was asleep when we arrived home,” Ramsey later told Barbara Walters. “We took her to bed, got Burke to bed, set the alarm, and went to sleep.”

Deep in the night, something horrible — and horribly unknowable — happened to JonBenét. When Patsy got up early the next morning, around 5:30 am, she reportedly came across a chilling ransom note left on the staircase.

“Mr. Ramsey, Listen carefully!” the note, which went on for pages, read in part. “At this time we have your daughter in our possession. She is safe and unharmed and if you want her to see 1997, you must follow our instructions to the letter. You will withdraw $118,000.00 from your account.”

The note also instructed the Ramseys to await a call “tomorrow” between 8 a.m. and 10 a.m. 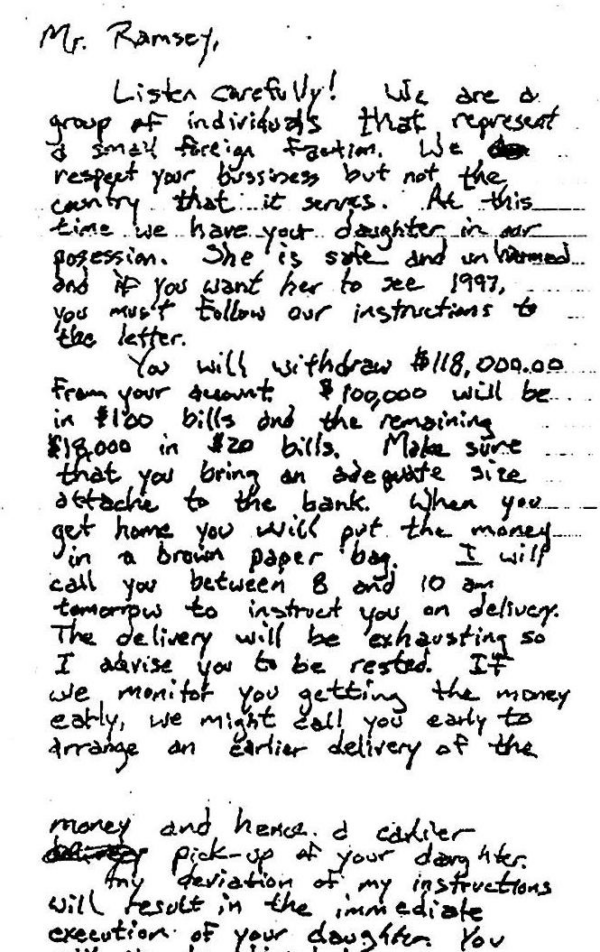 Wikimedia CommonsThe ransom note demanded a specific sum of $118,000 dollars, which happened to be John Ramsey’s bonus that year.

The Ramseys called the police to report the kidnapping and notified some family friends. Both parties converged on the house to offer their help. But there was no sign of the missing girl.

“It was awful,” John Ramsey said. “First of all, we didn’t know whether the kidnapper was going to call that day because the note said, ‘I will call you tomorrow. Get plenty of rest.’ I was deathly afraid that tomorrow was, in fact, the 27th.”

By 10 a.m., most people had left the house. And the call still hadn’t come. Detective Linda Arndt, who’d stayed behind, thought it was odd that neither John nor Patsy reacted to the lack of communication. She suggested John Ramsey take another look around the house.

He went to the basement — and that’s when he found JonBenét. Her arms were bound and pulled over her head; she had duct tape over her mouth and a garrote around her throat.

“I immediately knelt down over her, felt her cheek, took the tape immediately off her mouth,” John Ramsey recalled. “I tried to untie the cord that was around her arms and I couldn’t get the knot untied.”

John carried his daughter upstairs in hopes that she was still alive. But when Arndt saw him with the little girl in his arms, she had a sudden, chilling, epiphany. John Ramsey, she thought, had killed his daughter. 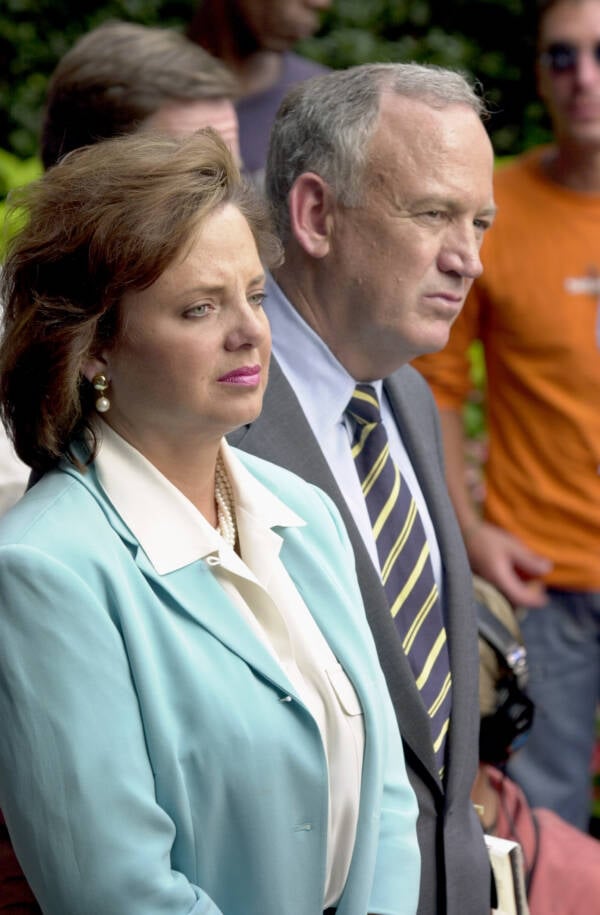 Erik S. Lesser/LiaisonJohn and Patsy Ramsey in 2000, after speaking to the Boulder police.

Over the next days, weeks, months, and years, much of the suspicion regarding JonBenét’s murder fell onto Patsy and John Ramsey. The garrote around JonBenét’s neck, the paper from the ransom note, and even the pen that the “kidnapper” used all came from within the Ramsey house.

What’s more, the note had demanded a specific sum — $118,000, which happened to be John Ramsey’s bonus that year. Police began to suspect that they’d killed JonBenét by accident and then staged the scene.

“The police drew a conclusion immediately that day, and then tried to find the evidence to prove it,” Ramsey later said. “And the evidence they were finding was, unfortunately for them, contradictory to their conclusion.”

But as he and his family tried to establish their innocence, they also faced a reckoning in the court of public opinion. Many harshly criticized JonBenét’s involvements in child pageants and photos of her soon flooded tabloids across the country. 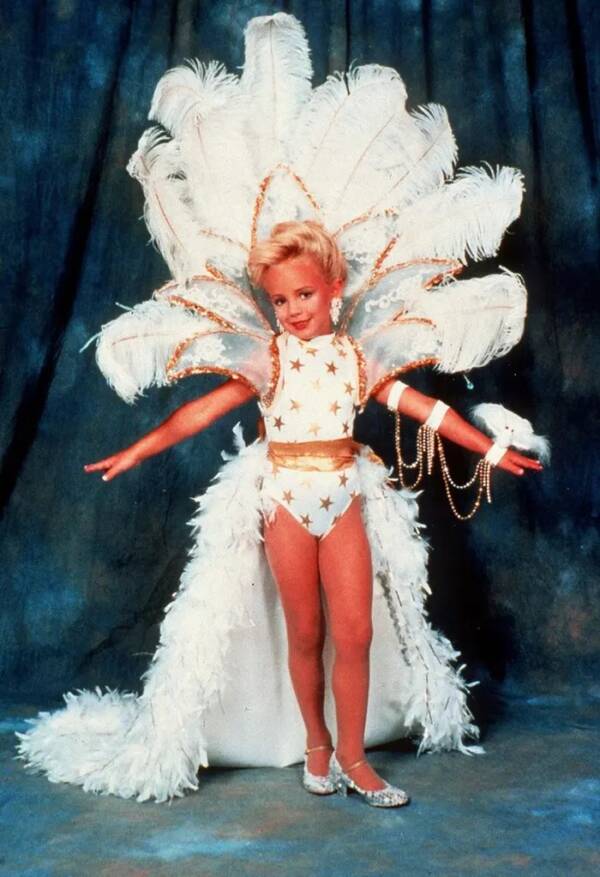 TwitterJonBenét competed successfully in numerous pageants, leading to allegations that her parents had over-sexualized her.

“[Patsy and JonBenét] just did it for fun,” Ramsey later said. “I used to always tell [JonBonét] that it’s your talent that counts, don’t worry if you’re not always the prettiest.”

As the tide against them turned, the Ramseys publicly and vehemently professed their innocence.

“I did not kill my daughter,” John Ramsey proclaimed in 1997. “I will miss her dearly for the rest of my life.”

Patsy echoed his statement, saying, “I did not kill JonBenét. I did not have anything to do with it. I loved that child with the whole of my heart and soul.”

Though the Boulder police considered the Ramseys to be the most likely suspects, the couple was granted some reprieve when retired detective Lou Smit began investigating the case. But though he initially agreed with police that the Ramseys were guilty, he soon changed his mind.

“It seemed as though the parents were probably involved,” Smit recorded in a video diary. “I thought this was [going to] be a fairly easy case. I thought it would be a slam dunk.” 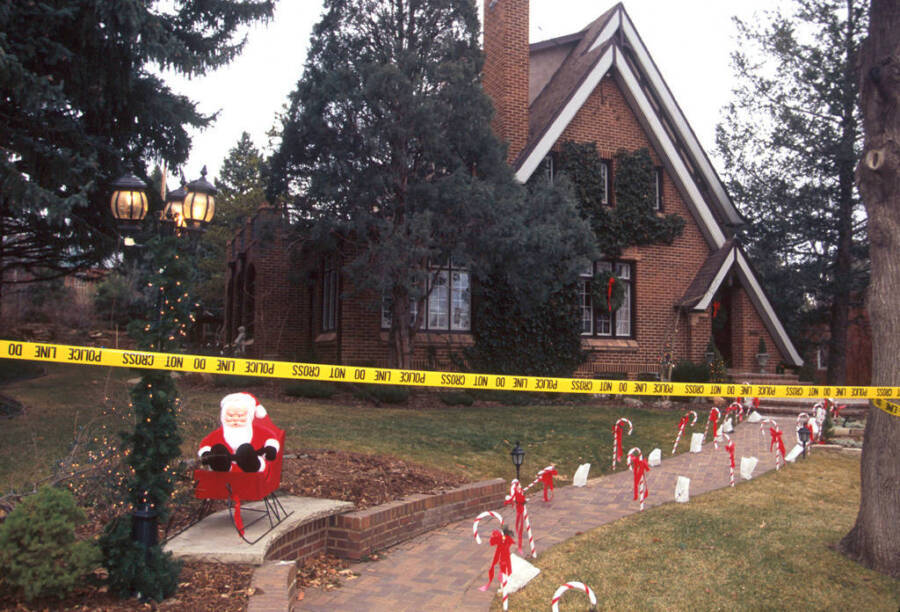 PinterestThe Ramsey home still had Christmas decorations up when it became the nexus of a murder investigation.

But Smit noticed a number of clues that suggested an intruder had killed JonBenét. There was an open window in the basement, an unexplained Hi-Tec footprint near JonBenét’s body, and physical evidence that suggested someone had used a stun gun on her.

“I’m not saying parents don’t kill their kids … parents do kill their children,” Smit continued. “But … [the Ramseys] didn’t do it.”

In 2008, two years after Patsy died of ovarian cancer, Smit seemed to be proven right. DNA testing revealed that DNA found in JonBenét’s underwear did not belong to any member of the Ramsey family.

“To the extent that we may have contributed in any way to the public perception that you might have been involved in this crime, I am deeply sorry,” then-Boulder County District Attorney Mary Lacy wrote to John.

In the years since, however, other investigators have accused Lacy of “overreaching” when she exonerated the Ramseys. And, indeed, the DNA may be a composite of multiple people, and therefore worthless as evidence.

What’s more, a grand jury voted to indict Patsy and John Ramsey in 1999 for child abuse, accusing them of “unlawfully, knowingly, recklessly and feloniously [permitting] a child to be unreasonably placed in a situation which posed a threat of injury to the child’s life or health.”

However, the prosecutor did not believe that the evidence was compelling enough to bring their case to trial.

But if the Ramseys didn’t kill JonBenét, then who did? Though possible suspects have emerged over time, no one has been charged.

There’s Gary Oliver, a local sex offender who allegedly told a friend he’d “hurt a little girl”; the Ramsey’s housekeeper, Linda Hoffman-Pugh, who’d asked the family for a large loan; and even JonBenét’s brother, Burke, whom some have speculated killed his little sister by accident over a bowl of pineapple.

A teacher based in Thailand at the time named John Mark Karr even offered a bizarre confession that they’d killed JonBenét. But the police ultimately decided that it wasn’t credible.

All the while, John Ramsey has waited for justice. But justice has never come.

“The death of JonBenét took away my desire to live for a while,” John Ramsey said in 2021. “[T]he actions of the police took away my ability to live normally and that, to some extent, continued for a long time in the way we were treated and assaulted.”

Where Is John Bennett Ramsey Today?

Today, John Ramsey’s life is very different from how it was before JonBenét’s murder. He lost his fortune — though he settled a defamation suit worth $80 million with the Boulder police department — many of his family, friends, and his reputation. In 2006, he lost Patsy.

Since then, Ramsey has moved back to Michigan. He’s married to his third wife, Jan Rousseaux, and keeps out of the spotlight as much as he can.

But John Bennett Ramsey has never given up on finding JonBenét’s killer. “I think we will have two ways that will happen,” he said in 2015. “It will either be a DNA match or someone who knows something will become angry or bitter against this person and will tell.”

As for finding JonBenét’s killer and finally clearing his name, John Ramsey said: “That is the sole mission for the rest of my life.”

After reading about John Bennett Ramsey, look through these chilling unsolved murder cases. Or, read about some of history’s most infamous female serial killers.