John Lennon’s death shocked the world. On December 8, 1980, the former Beatle was fatally shot outside of his Manhattan apartment building, The Dakota. Within minutes, one of the most iconic rock stars was gone forever.

Lennon’s intense personality and lyrical genius left a profound impact on the world after his death — as fans quickly gathered outside his apartment to mourn the tremendous loss. As for Mark David Chapman, the crazed Beatles fan who murdered John Lennon, he was promptly arrested at the scene and remains behind bars to this day. 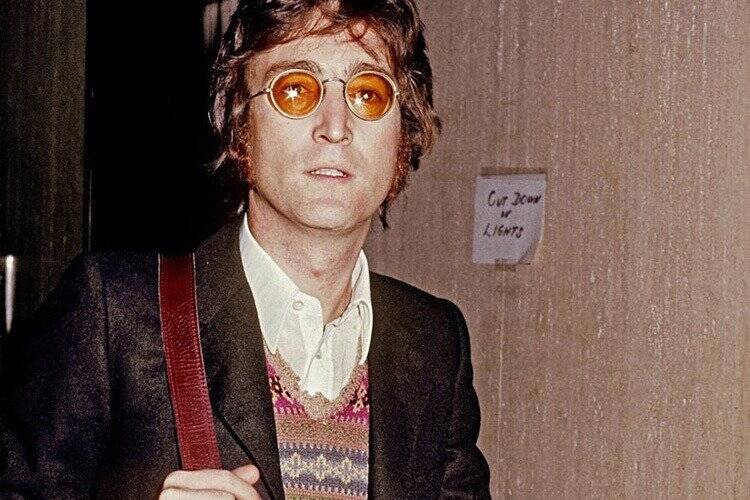 RV1864/FlickrJohn Lennon’s death in 1980 is still regarded as a huge loss for the music industry. Fans were especially devastated when they learned how John Lennon died.

But what happened at The Dakota on that infamous December night? How did John Lennon die? And why did Mark David Chapman decide to kill a man he once idolized?

The Hours Before John Lennon’s Death

On December 8, 1980, John Lennon had a pretty normal start to the day — for a rock star, that is. After taking a break from music, Lennon — and his wife, Yoko Ono — had just released a new album called Double Fantasy. Lennon spent that morning promoting the album.

First, he and Ono had an appointment with Annie Leibovitz. The famous photographer had come to get a picture for Rolling Stone. After some debate, Lennon decided he would pose nude — and his wife would remain clothed. Leibovitz snapped what would become one of the most famous images of the couple. Both Ono and Lennon were thrilled with the photo. 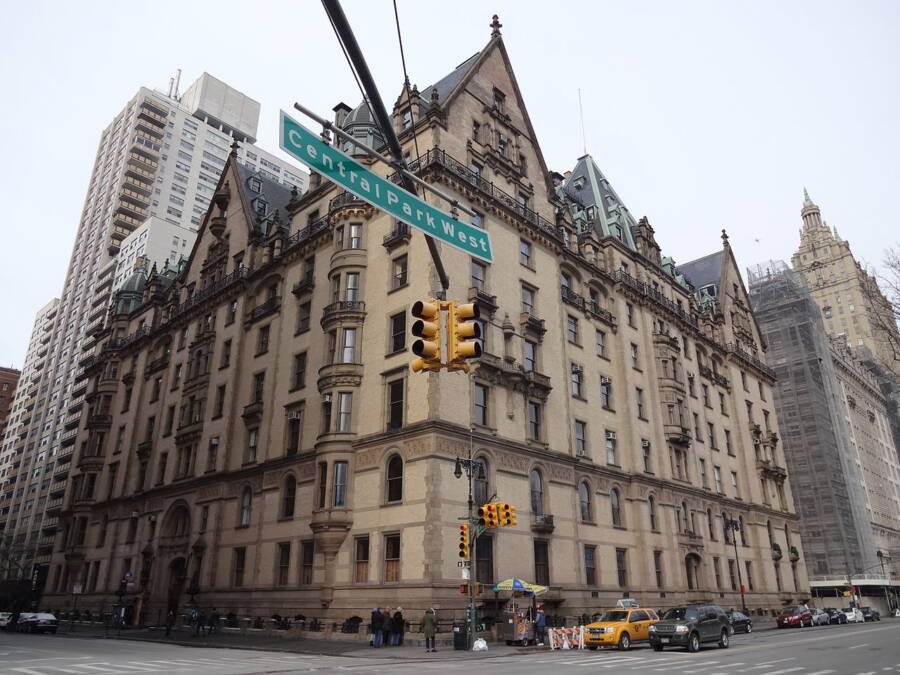 Wikimedia CommonsThe Dakota in 2013. John Lennon lived in this building and died just outside of it.

“This is it,” Lennon said to Leibovitz when she showed him the Polaroid. “This is our relationship.”

A short while later, a crew from RKO Radio arrived at The Dakota to tape what would be Lennon’s final interview. At one point during the conversation, Lennon mused about getting older.

“When we were kids, 30 was death, right?” he said. “I’m 40 now and I feel just… I feel better than before.” During the interview, Lennon also reflected upon his extensive body of work: “I consider that my work won’t be finished until I’m dead and buried and I hope that’s a long, long time.” 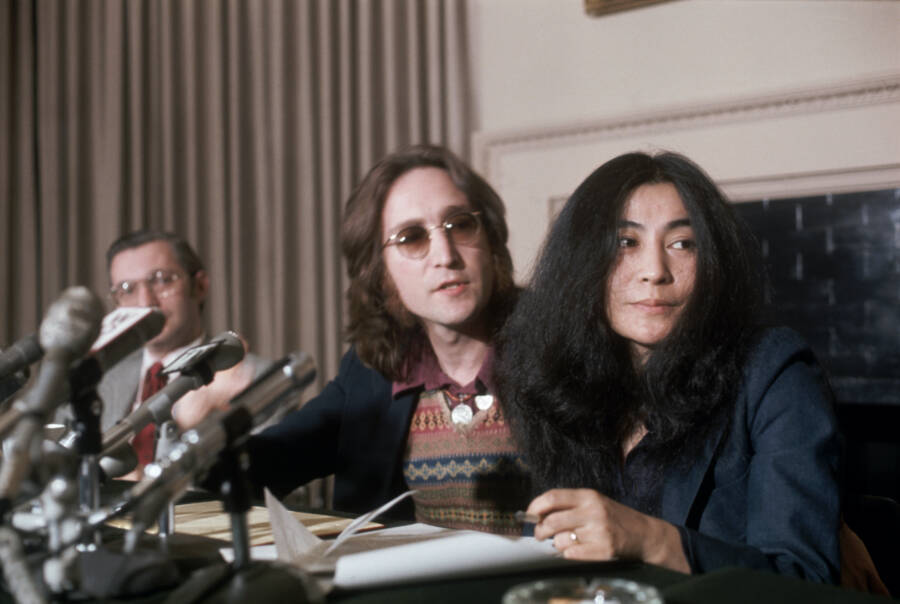 When Lennon and Ono left The Dakota a few hours later, they briefly met the man who would kill Lennon later that day. Waiting outside the apartment building, Mark David Chapman held a copy of Double Fantasy in his hands. 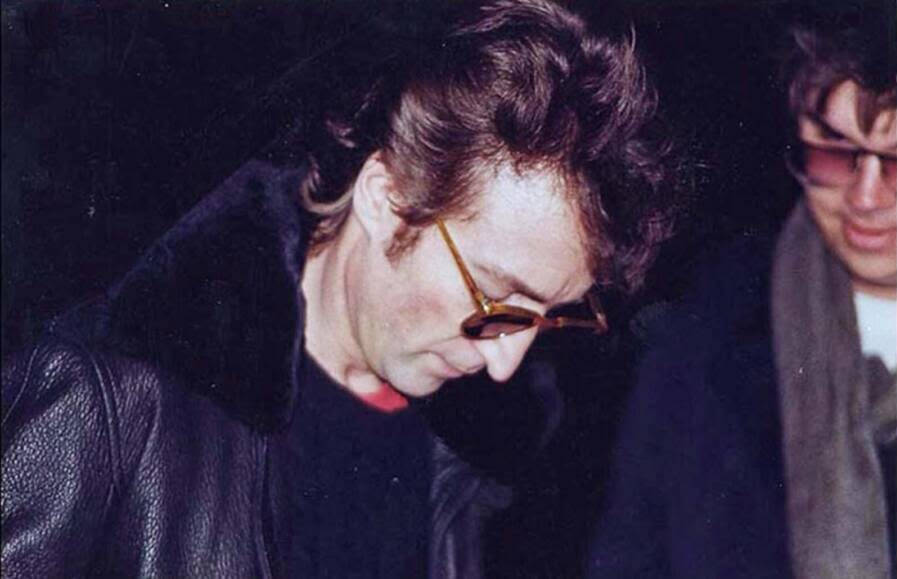 Ron Hummel, a producer who was with Lennon and Ono, remembers the moment well. He recalls that Chapman silently held out his copy of Double Fantasy, which Lennon signed. “[Chapman] was silent,” Hummel said. “John asked, “Is this all you want?’ and again, Chapman said nothing.”

“He was very kind to me,” Chapman said of Lennon. “Ironically, very kind and was very patient with me. The limousine was waiting… and he took his time with me and he got the pen going and he signed my album. He asked me if I needed anything else. I said, ‘No. No sir.’ And he walked away. Very cordial and decent man.”

But Lennon’s kindness to Chapman didn’t change anything. The 25-year-old, who was living in Hawaii at the time, had specifically flown to New York to murder John Lennon.

Although he had considered other celebrity murders — including John Lennon’s former bandmate, Paul McCartney — Chapman had developed a specific hatred toward Lennon. Chapman’s animosity toward the former Beatle started when Lennon infamously declared that his group was “more popular than Jesus.” As time went on, Chapman began to see Lennon as a “poser.”

On his last day of work as a security guard in Hawaii, Chapman signed out of his shift as usual — but he wrote “John Lennon” instead of his real name. He then prepared to fly to New York City.

But before killing John Lennon, Chapman apparently wanted an autograph first. After Lennon obliged, Chapman slunk back into the shadows near the apartment. He watched as Lennon and Ono got into their limousine and drove away. Then, he waited.

How Did John Lennon Die? 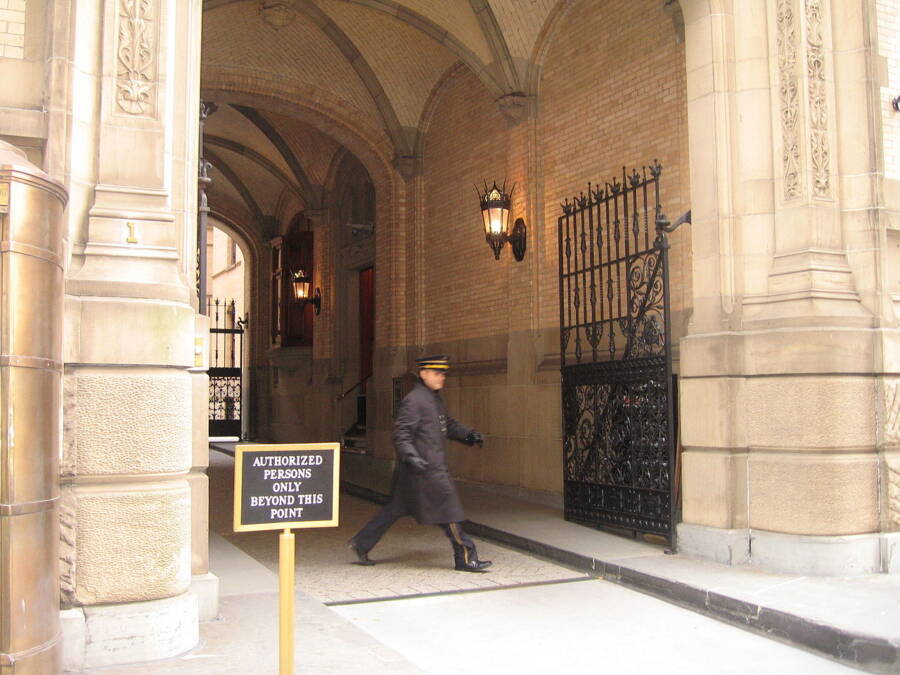 Wikimedia CommonsThe archway of The Dakota, where John Lennon was shot.

At 10:50 PM on December 8, 1980, John Lennon and Yoko Ono returned home to The Dakota. Chapman later said, “John came out, and he looked at me, and I think he recognized… here’s the fellow that I signed the album earlier, and he walked past me.”

As Lennon walked toward his home, Chapman raised his weapon. He fired his gun five times — and four of the bullets hit Lennon in the back. Lennon staggered into the building, crying, “I’m shot!” Ono, who, according to Chapman, ducked for cover when she heard the shots, rushed to hold her husband after she realized he had been attacked.

“I stood there with the gun hanging limply down at my right side,” Chapman recounted in a later interview. “Jose the doorman came over and he’s crying, and he’s grabbing and he’s shaking my arm and he shook the gun right out of my hand, which was a very brave thing to do to an armed person. And he kicked the gun across the pavement.”

Chapman stood patiently and waited to be arrested, reading The Catcher in the Rye, a novel that he was obsessed with. He would later be sentenced to 20 years to life for the murder of John Lennon. 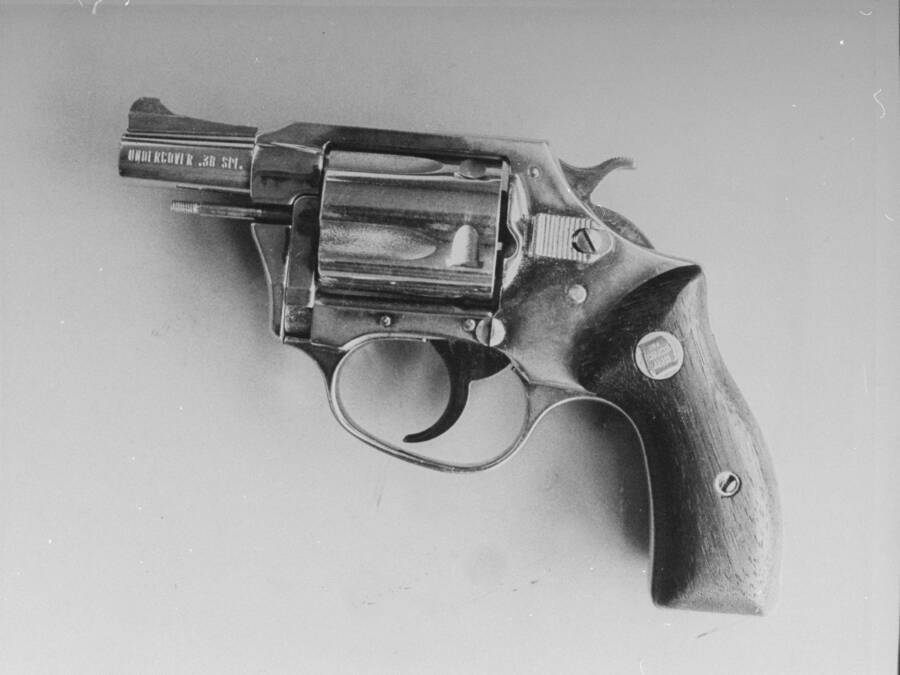 According to reports, John Lennon died almost instantly after being shot. Bleeding profusely and too injured to wait for an ambulance, Lennon was placed in a police car and sped to Roosevelt Hospital. But it was too late.

Lennon was pronounced dead on arrival — and news of the shooting had already spread like wildfire. Stephen Lynn, the doctor who emerged to speak to the press, made the official declaration that Lennon was gone.

“Extensive resuscitative efforts were made,” Lynn said. “But in spite of transfusions and many procedures, he could not be resuscitated.”

Doctors officially pronounced Lennon dead at 11:07 p.m. on December 8, 1980. And as Lynn told the crowd, John Lennon’s cause of death was likely a severe wound from the gunshots.

“There was a significant injury of the major vessels inside the chest, which caused a massive amount of blood loss, which probably resulted in his death,” Lynn said. “I’m certain that he was dead at the moment that the first shots hit his body.” 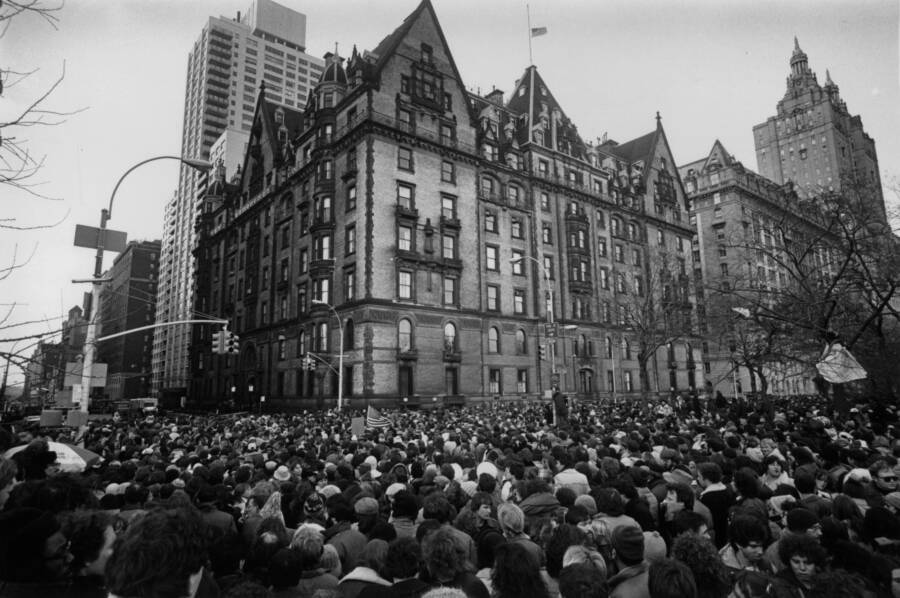 Keystone/Getty Images
Mourners gather at The Dakota, where John Lennon was shot.

Millions mourned the murder of John Lennon. But no one — aside from Ono — had known him as well as the other former Beatles: Paul McCartney, Ringo Starr, and George Harrison. So how did they react to John Lennon’s death?

McCartney, cornered outside of a studio, was infamously quoted as saying, “It’s a drag.” Heavily criticized for this comment, McCartney later clarified his remarks: “There was a reporter, and as we were driving away, he just stuck the microphone in the window and shouted, ‘What do you think about John’s death?’ I had just finished a whole day in shock and I said, ‘It’s a drag.’ I meant drag in the heaviest sense of the word.”

As for Starr, he was in the Bahamas at the time. When he heard that Lennon had been killed, Starr flew to New York City and went straight to The Dakota and asked Ono how he could help. She told him he could keep Sean Lennon — her son with John — occupied. “And that’s what we did,” said Starr.

In 2019, Starr admitted to getting emotional whenever he thinks about how John Lennon died: “I still well up that some bastard shot him.”

As for Harrison, he provided this statement to the press:

“After all we went through together, I had and still have great love and respect for him. I am shocked and stunned. To rob a life is the ultimate robbery in life. The perpetual encroachment on other people’s space is taken to the limit with the use of a gun. It is an outrage that people can take other people’s lives when they obviously haven’t got their own lives in order.”

The Legacy Of John Lennon Today 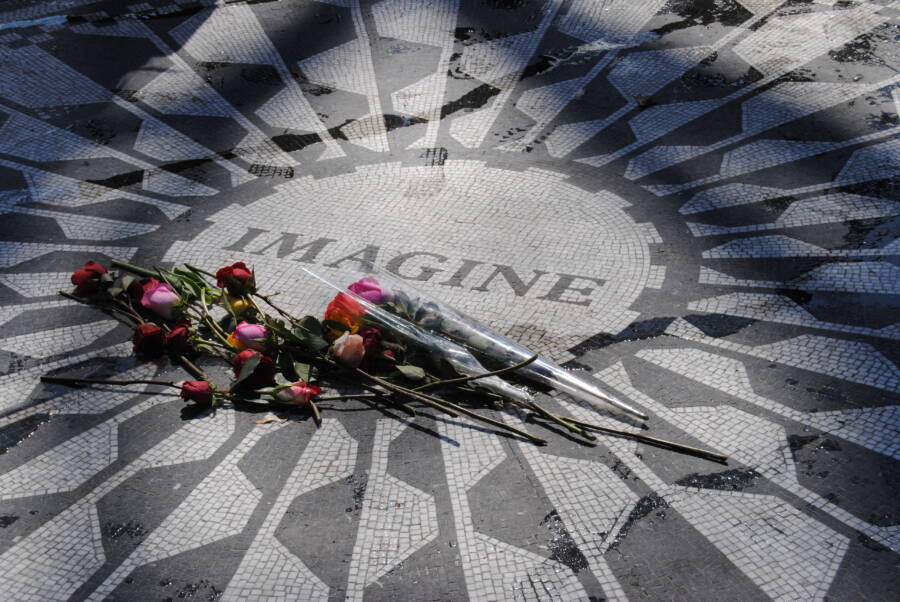 In the days that followed John Lennon’s death, the world mourned with his wife and former bandmates. Crowds gathered outside The Dakota, where Lennon was shot. Radio stations played old Beatles hits. Candlelight vigils took place all over the world.

Sadly, some fans found the news of John Lennon’s death so devastating that they took their own lives.

Ono, with help from New York City officials, created a fitting tribute to her late husband. A few months after Lennon’s death, the city named a small section of Central Park “Strawberry Fields” after one of the most iconic Beatles songs.

In the years since, this stretch of the park has become a memorial for John Lennon. Among the 2.5 acres of Strawberry Fields is a circular black-and-white marble mosaic, impressed with the word “Imagine” at its center — a nod to one of Lennon’s most famous songs.

“During his career with the Beatles and in his solo work, John’s music gave hope and inspiration to people around the world,” Ono later said. “His campaign for peace lives on, symbolized here at Strawberry Fields.”

John Lennon lives on in more ways than Strawberry Fields. His music continues to delight and enchant generations. And “Imagine” — Lennon’s iconic song about imagining a peaceful world — is considered by some to be the greatest song of all time.

As for Lennon’s killer, Mark David Chapman, he remains behind bars to this day. His parole has been denied 11 times. For every hearing, Yoko Ono has sent a personal letter urging the board to keep him in prison. 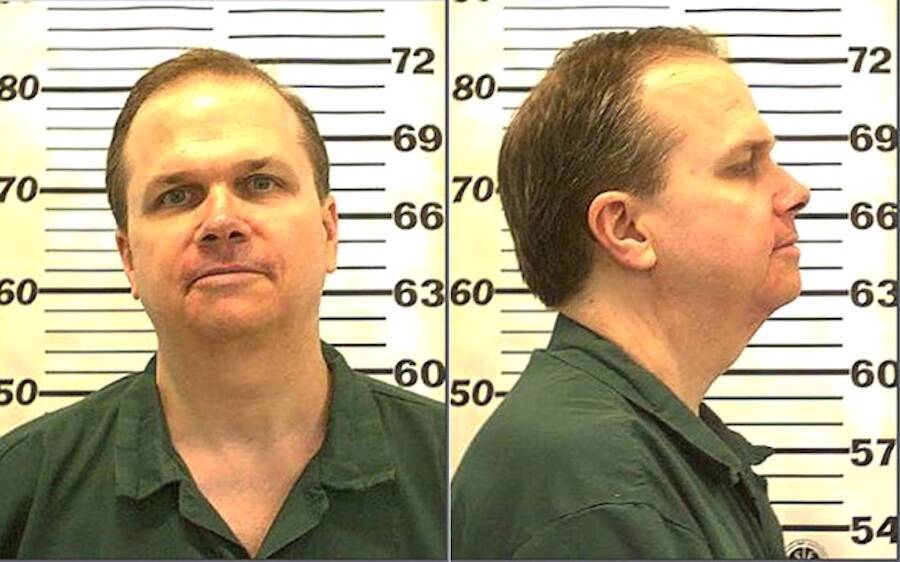 Chapman previously claimed that he murdered Lennon for notoriety. In 2010, he said, “I felt that by killing John Lennon I would become somebody, and instead of that I became a murderer, and murderers are not somebodies.” In 2014 he said, “I am sorry for being such an idiot and choosing the wrong way for glory,” and that Jesus “has forgiven me.”

He has since described his actions as “premeditated, selfish, and evil.” And it’s safe to say that countless people agree.