John Wayne's legacy as the white, conservative Western hero of the 1950s included stances inherent to those attributes: racial superiority, homophobia, and revulsion at the changing landscape. 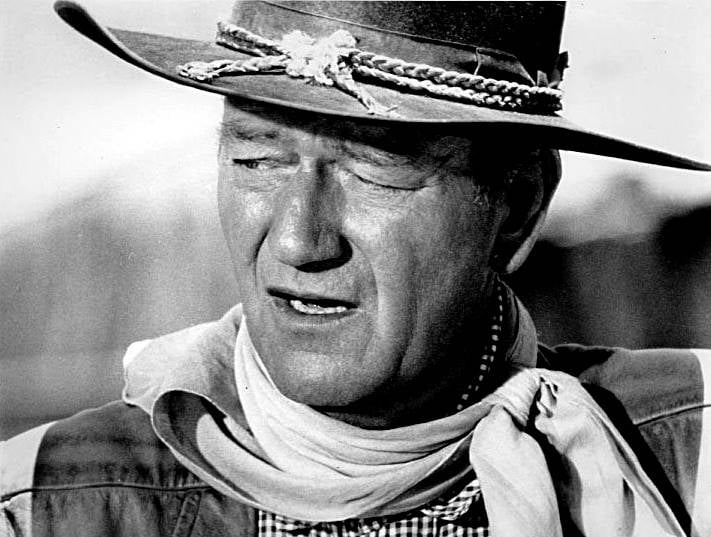 Wikimedia CommonsJohn Wayne in The Comancheros (1961).

A 1971 Playboy interview with Hollywood legend John Wayne has made the rounds this week, with unsuspecting readers on social media learning of the Western icon’s casual racism, homophobia, and public support of white supremacy.

Conducted in the latter part of his career — eight years before his death and long after Wayne’s peak as a star — the interviewer managed to get the actor to expand on his stances on diversity, American history, and social justice, with reasoning that has shocked readers of today.

In addition to expressing his disgust at homosexual love or desire depicted on screen, Wayne defended the American genocide of Native Americans by arguing it was a matter of survival, and said reparations for the families of former slaves wouldn’t be fair to people like him, The Guardian reported.

He also explained that he supported equality of opportunity for the country’s African American population only when they’ve reached a certain level of intellect and skill.

“With a lot of blacks, there’s quite a bit of resentment along with their dissent, and possibly rightfully so,” he said. “But we can’t all of a sudden get down on our knees and turn everything over to the leadership of the blacks. I believe in white supremacy until the blacks are educated to a point of responsibility.”

“I don’t believe in giving authority and positions of leadership and judgment to irresponsible people,” he added.

When asked if Wayne himself was the right person to judge at what point the country’s African American population had, indeed, been educated enough to garner those privileges, the actor pivoted.

Wayne reasserted his notion that black Americans hadn’t yet reached the same level of intellect as their white counterparts, and pointed toward unspecified academic tests that supposedly supported his position.

“It’s not my judgement,” said Wayne. “The academic community has developed certain tests that determine whether the blacks are sufficiently equipped scholastically. But some blacks have tried to force the issue and enter college when they haven’t passed the tests and don’t have the requisite background.” 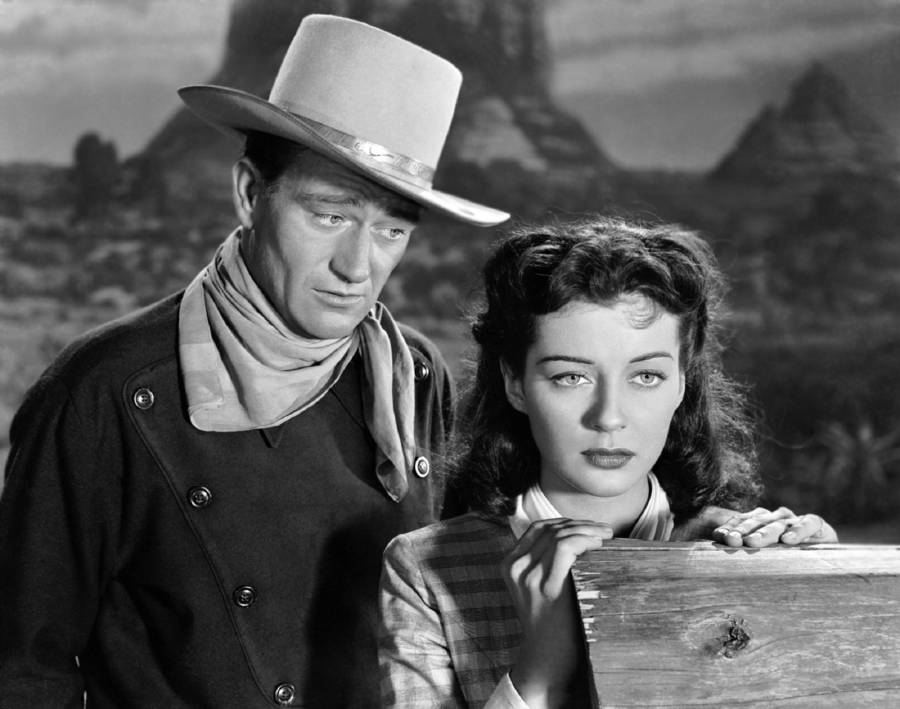 PixabayJohn Wayne and Gail Russell in Angel And The Badman (1946).

Regarding diversity in Hollywood, the actor wavered on having any amount of responsibility as a Hollywood star to include people of color in his pictures. He claimed that it was “just as hard for a white man to get a card in the Hollywood craft unions” as it was for black people.

“I think the Hollywood studios are carrying their tokenism a little too far,” he said. “There’s no doubt that 10 percent of the population is black, or colored, or whatever they want to call themselves; they certainly aren’t caucasian.”

“I’ve directed two pictures and I gave the blacks their proper position,” he said. “I had a black slave in The Alamo, and I had a correct number of blacks in The Green Berets. If it’s supposed to be a black character, naturally I use a black actor. But I don’t go so far as to hunting for positions for them.”

Wayne then explained that it would only be right to mirror society’s diversity in population on screen, but argued that most black people haven’t had the proper training to functionally serve the cast or crew.

Unfortunately, the interviewer never asked the actor to expand on his prideful casting of a black person as a slave, nor his comment regarding the “correct number of blacks.” The discussion moved on to an equally stupefying stance on America’s indigenous populations — and Wayne’s nonchalant depiction of their alleged inferiority in his films. 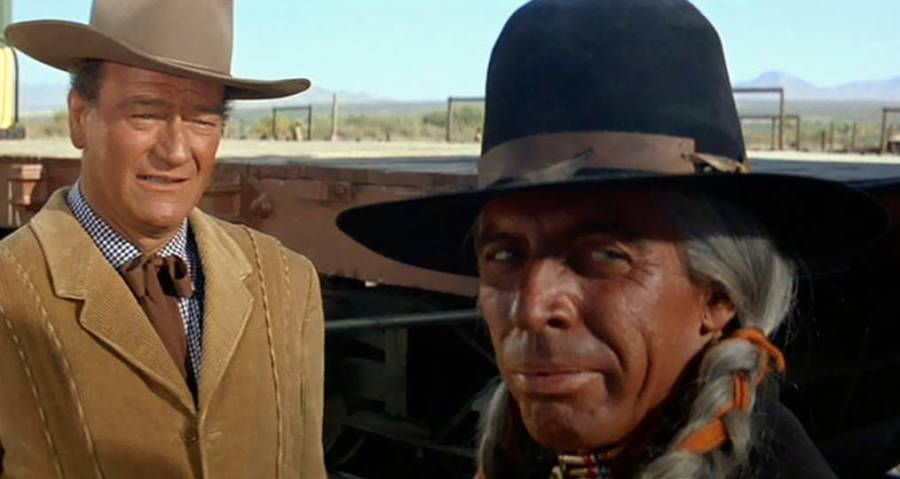 Wikimedia CommonsJohn Wayne and a Native American character in McLintock! (1963).

“I don’t feel we did wrong in taking this great country away from them, If that’s what you’re asking,” said Wayne, seemingly unaware that he admits to the forceful removal while rejecting blame. “Our so-called stealing of this country from them was just a matter of survival.”

“There were great numbers of people who needed new land, and the Indians were selfishly trying to keep it for themselves,” he said.

The topic of discussion then switched to the actor’s predilection for the kinds of conservative, heteronormative standards on the silver screen he had been such an effective figurehead for throughout the 1950s and 60s.

When asked, specifically, what films he deemed too perverted to deserve being distributed to cinemas across the country, Wayne’s choices pointed toward staunch disagreement with the era’s counter-culture — and increasing social support for homosexuals.

“Oh, Easy Rider, Midnight Cowboy — that kind of thing,” he said. “Wouldn’t you say that the wonderful love of those two men in Midnight Cowboy, a story about two fags, qualifies (as perverted)?”

“But don’t get me wrong,” he said. “As far as a man and a woman is concerned, I’m awfully happy there’s a thing called sex. It’s an extra something God gave us. I see no reason why it shouldn’t be in pictures. Healthy, lusty sex is wonderful.”

Ultimately, John Wayne’s legacy was built during a period of American history where comments like these went largely unchallenged, and the nonchalant dismissal of minority groups pervaded every industry in the country.

He became a hero to Americans like him — white, male, and unflinching in his readiness to defend past atrocities if it meant safeguarding those privileges for a little while longer.

After reading about John Wayne’s unsettling remarks from the newly resurfaced 1971 Playboy interview, read about the theories that John Wilkes Booth was a sex-crazed playboy. Then, learn about Stalin’s plot to kill John Wayne.