From Newsweek To Now: Journalism, Sexism And Social Media

To some, if an article challenges one's beliefs or offends them, it must have been written by a woman. Here's why that matters.

Female journalists in France united this May against sexism they receive from French lawmakers and PR staffers by penning an article denouncing misogynist politicians in Liberation, one of France’s most popular newspapers.

Columnist Jef Rouner recently “broke the internet” with a controversial piece titled “No, It’s Not Your Opinion. You’re Just Wrong.” In it, Rouner explores and ultimately tears down the notion that opinions are inherently valid–and valuable. The piece spread far and wide across the web with both positive and negative feedback, but a significant portion of disapproval came from conservative audiences who rejected his ideas on systemic racism and climate change.

More interesting than the original article was Rouner’s follow-up piece, It’s Weird How People Correct Me When They Think I’m A Woman, which he published a week later. There, Rouner points out that many readers of the original piece incorrectly assumed he was a woman. Rouner notes that these readers employed a condescending, gendered tone in their responses.

As importantly, Rouner highlights that this tone was not present from readers who correctly identified him as a male, and criticized his work:

Here is one such response from a person who misgenders the author, and the author’s response.

While these condescending remarks must have been upsetting for Rouner to receive, the author got a mere taste of what female journalists experience on a day-to-day basis. Women are disproportionately the victims of abuse, online bullying and harassment, and female journalists frequently experience name-calling, crude jokes, sexual comments, and hostile racist/sexist insults, especially if their work covers a controversial topic or criticizes popular ideas in mainstream culture.

A study by the British cross-party think tank Demos analyzed over two million tweets that were sent to a selection of the most prominent and widely-followed public figures on Twitter, including celebrities, politicians, journalists and musicians – all of which were specifically chosen to ensure that an equal number – roughly one million tweets – were aimed at each gender, according to the study release.

The study concluded that well-known or famous men receive more offensive and negative messages than their female counterparts, in all but one category: journalists. According to their results, female journalists and TV news presenters receive roughly three times as much abuse as their male counterparts (for more information on what Demos considers “offensive,” check the press release).

This information is hardly surprising when you look at the female journalists who come forward about their negative experiences in the field, which range anywhere from sexual advances and remarks to death threats and doxing.

Jessica Misener, a former music journalist, detailed one such experience in a Buzzfeed interview, stating:

“…the most blatant ad hominem attack I got was when I published an article on Jack White’s view of women on The Atlantic. I got a few informed critiques of my argument, which I welcomed and appreciated. But most of the comments section quickly devolved into a scathing bashing of the headshot of me that ran with my byline: “By the looks of you, you should be writing about Maroon 5 instead,” and predictable comments about how I was both a “feminazi” and a “cold bitch who just needs to get laid.”

Of course, everyone knows not to take the internet peanut gallery too seriously. But still, even for a bit more seasoned writer like me, those anti-women remarks were hard to stomach. I’d imagine they’d be staggeringly discouraging for a female writer who’s just getting started in the business.” 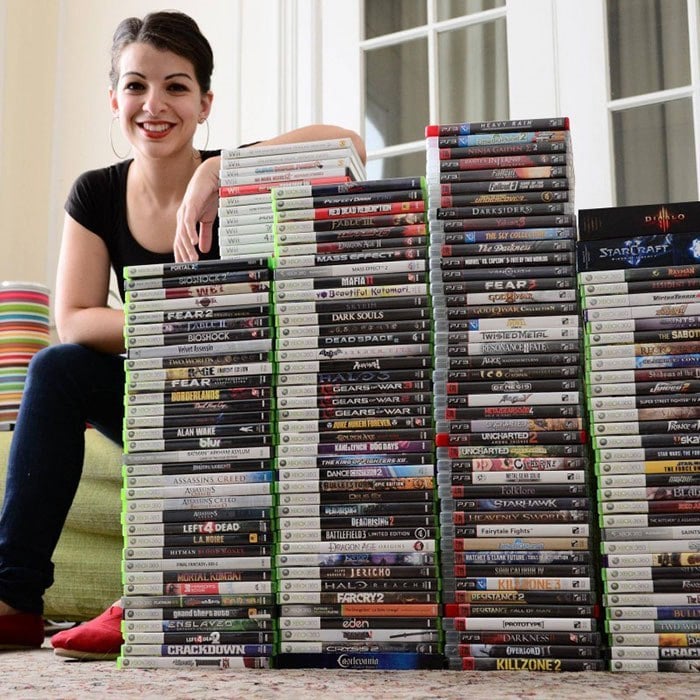 A photo of Anita Sarkeesian of Feminist Frequency. Source: The New Statesman

Unfortunately, some comments from “the peanut gallery” can’t be as easily dismissed, as they can devolve into death threats and personal information leaks. Anita Sarkeesian, a feminist who looks at critical representations of women in television, film, and video games, published an article earlier this year where she visually documented every hateful Twitter message she received for one week in January. In the article, Sarkeesian says,

“Ever since I began my Tropes vs Women in Video Games project, two and a half years ago, I’ve been harassed on a daily basis by irate gamers angry at my critiques of sexism in video games. It can sometimes be difficult to effectively communicate just how bad this sustained intimidation campaign really is. So I’ve taken the liberty of collecting a week’s worth of hateful messages sent to me on Twitter. The following tweets were directed at my @femfreq account between 1/20/15 and 1/26/15.” 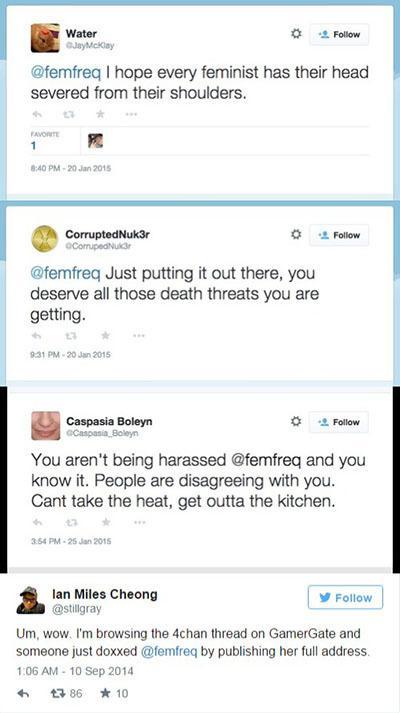 These are the least upsetting of the tweets Sarkeesian received. Source: Feminist Frequency

Threats like this can’t always be ignored, especially when they have the potential to be physically carried out.

In some cases, these internet abusers may escalate the encounter to maintain control of the situation, confronting the victim in person. So really, for Sarkeesian, this negative feedback could result in a dangerous physical encounter.

Unfortunately, legal protections for this kind of online abuse are rare, and some women who have tried to prosecute their naysayers have been told by the courts to simply “get offline.” But is this an actual solution to the web’s frequently abusive response to women in journalism? 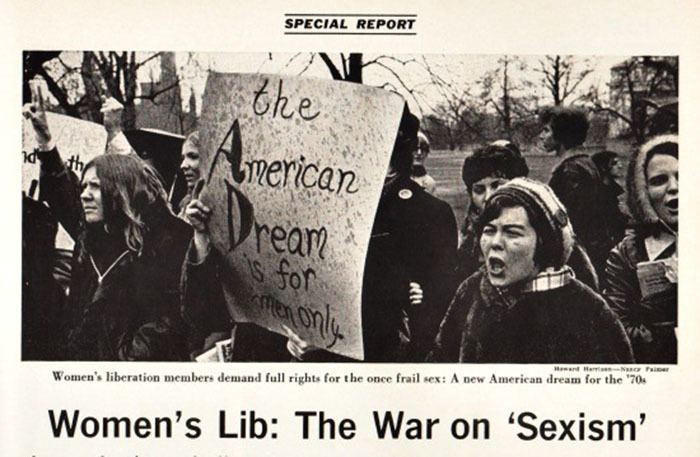 Before the Civil Rights Act of 1964 took effect, sex discrimination was legal, meaning that women with journalistic ambitions were hired almost exclusively for the mail desk or as fact checkers, and were rarely promoted. Men by and large ran the newsroom, and it was these voices that, with few exceptions, decided which stories were worth telling and reported them to the world.

With the help of attorney Eleanor Holmes Norton, a group of 46 women who worked for Newsweek magazine successfully changed this industry-wide practice, in part by organizing and becoming the first women in the media to sue on the grounds of sex discrimination, symbolically taking off their “white gloves” and fighting for their right to write. By 1973–three years after the Newsweek employees teamed up with Norton–the magazine had finally accepted goals and timetables for hiring women.

In spite of these gains, women are still underrepresented in journalism. Washington Post editor Amy Joyce wrote that, according to the American Society of News Editors’ annual census, “the employment of men and women by job category has remained about the same for years — newsrooms remain about two-thirds male. In 2013, the percentage of male supervisors is 65.4 versus 34.6 percent for females.”

For reporters, “62.2 percent [are] male versus 37.8 female. Copy editors/layout editors/online producers (all one category) are divided 60.1 percent male and 39.9 female, while photographers/videographers make up the largest gender gap: 75.1 percent male versus 24.9 percent female.” In all, Joyce notes, “men have 63.7 percent of the gigs, while women have 36.3 percent.”

With that in mind, the suggestion that women simply “get offline” as a response to sexism in journalism is not an effective means of combating journalistic sexism–especially when female journalists have worked so hard to get “online” in the first place.

Jef Rouner might have summed up the entire issue when he chose not to combat the issue of institutional sexism, as our culture is saturated with it. But when a significant number of readers decide to make the author of a personally and politically challenging text a woman, that speaks volumes.