Mom Who Murdered Daughter With Crucifix During Exorcism To Face Sentencing

Geneva Gomez was beaten, stabbed, and choked beyond recognition by her mom, Juanita Gomez. 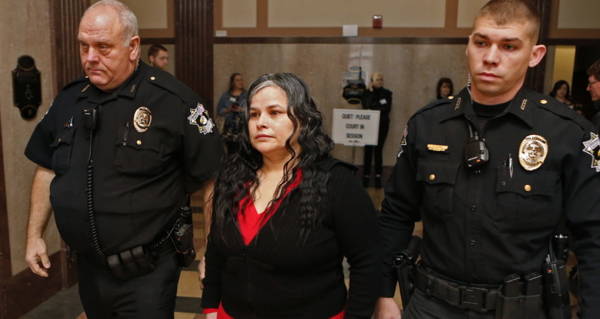 So said the prosecutor at the outset of the murder trial of Juanita Gomez that began earlier this week in Oklahoma City, according to The Oklahoman.

In August 2016, police arrested Gomez for the murder of her 33-year-old daughter, Geneva, whose body had been found on the floor of her mother’s home. The young woman had been stabbed and brutally beaten beyond recognition about the face and head.

Merlos found the body after Juanita Gomez invited him into her home, apparently making little attempt to conceal the crime. Indeed, Gomez soon confessed to police, telling them that she’d forced a crucifix as well as a religious medallion down her daughter’s throat. Afterward, she laid her daughter’s body out on the floor in the style of a crucifixion and left the crucifix itself on the corpse.

Gomez did all of this, according to her statements to police and Merlos’ testimony, because she believed her daughter had been possessed by the devil.

According to Merlos, when he first found the body, Gomez kept mumbling about the devil. Later, she told police that her daughter had been speaking in tongues in a demonic voice.

Given such details, Gomez’s lawyers had intended to use an insanity defense at trial, but have since changed course. A psychological evaluation found that she was competent to stand trial and “was grossly feigning memory problems to appear incompetent.”

With Juanita Gomez fit to stand trial, the proceedings have now moved swiftly, with jury deliberations expected to begin on Thursday.

Gomez will soon become the second American mother to face justice after attempting to rid her daughter of the devil using horrifying methods. In June 2017, police in Humboldt County, California arrested Kimberly Felder after she was seen beating, biting, and choking her 11-year-old daughter on a local beach in an attempted exorcism. Fortunately, in the Felder case, the victim survived.

Next, read up on Anneliese Michel, the young woman who was killed after her parents put her through a year of grisly exorcism rites. Then, learn the story of Roland Doe, the boy whose case inspired The Exorcist.