The True Story Of Karl May, The Adventure Writer Who Became Hitler’s Favorite Author

In the 19th century, a German author named Karl May wrote a series of novels set in the American West — which later influenced the worldview of Adolf Hitler. 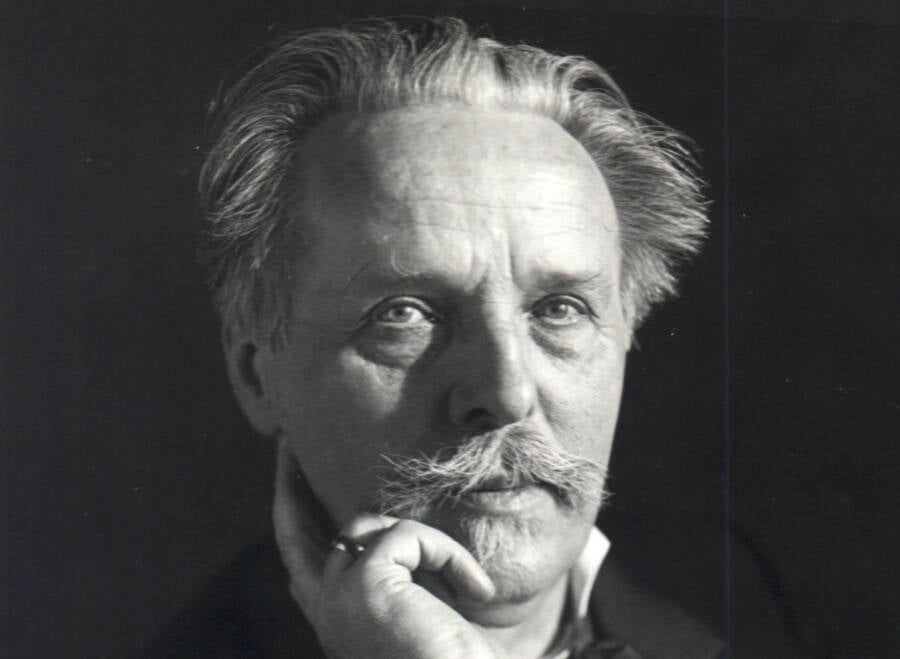 Wikimedia CommonsWith more than 200 million book sales to his name, Karl May is one of the most successful German authors of all time.

Karl May (pronounced like “my”) lived many lives. A child of a large family, he would become a scholar, a thief, a prisoner and a bestselling author. Many of his readers likely remember him as a gun-toting, rough-and-tumble frontiersman of the American West who told tales of his experiences through storytelling. However, in that respect, May was largely a fraud.

The adventure novelist had never been to the American West. He never interacted with cowboys or Native populations. In fact, the closest he may have ever gotten was a seat at one of the international shows put on by Buffalo Bill.

But readers were too swept up in his adventures to believe May was telling anything but the truth. One Austrian-born German reader in particular escaped the harsh realities of life through the travels of May’s characters during his childhood — none other than Adolf Hitler. He reportedly spent so much time consuming May’s novels that it began to affect his schoolwork. And as Hitler grew to become the leader of the Nazi regime, he would still look to May’s popular characters Winnetou and Old Shatterhand to shape his worldview.

Karl May Creates His Own Character 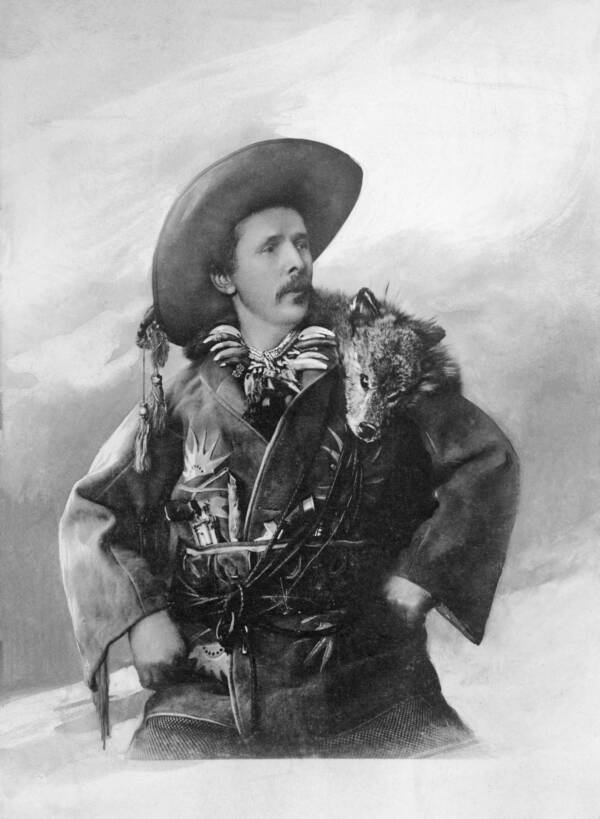 Wikimedia CommonsKarl May in costume as his character, Old Shatterhand.

Karl May was born in Saxony in 1842 to a very poor family, the fifth of 14 children. At the time, children had the choice of work or school, and May decided he wanted to be a teacher.

However, he was soon kicked out for stealing candle scraps he claimed were for his sister’s Christmas gift. Later, he was accused of stealing a pocket watch and lost his teaching license. To make ends meet, he became a grifter, impersonating an investigator checking for counterfeit money door-to-door, or as an executive that would order fine furs and pawn them under assumed names.

Eventually, May found his place as a writer, working as a freelancer before penning his novels. His most popular characters were Winnetou, an Apache chief, and Old Shatterhand, a cowboy.

Several of those novels were read countless times by Adolf Hitler during his childhood as a way to escape the drudgery of life. The escapism that the American West adventures of the pair provided a blueprint — first of exploration, but soon of something far more sinister. 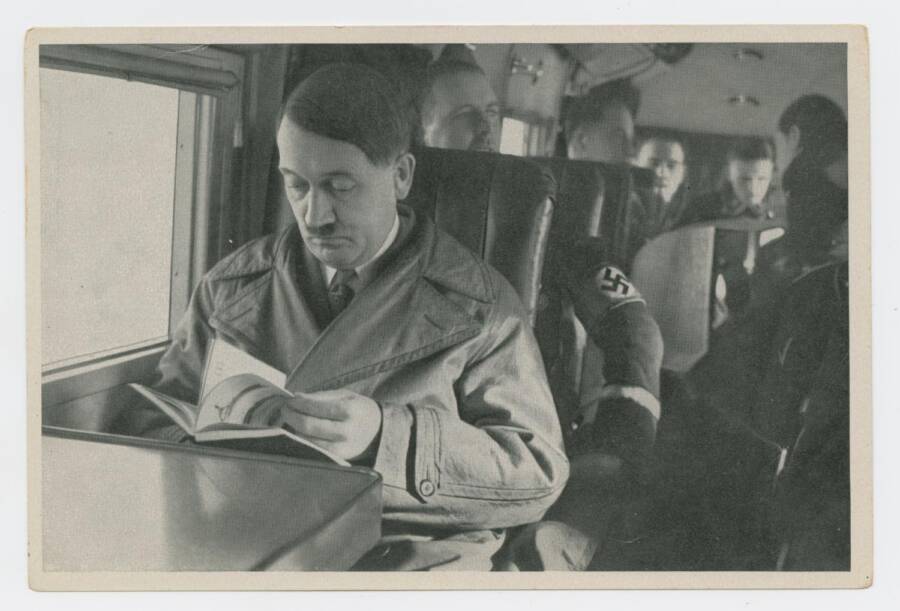 Scholars of the Third Reich note that Hitler’s creation of Polish ghettos as Germany invaded the country mirrored the way the Native people in May’s stories — and in real life — were forced onto reservations. Hitler also was said to admire the way white Americans had “gunned down” Native communities, reducing Indigenous populations from the millions to a few hundred thousands.

After a Nazi plane carrying battle plans went down in Belgium in 1939, Hitler fired many officers because of their carelessness, insisting that if they had read more May the mistake wouldn’t have been made. He also sent copies of May’s books to troops as they fought for control of Russia. Hitler believed Winnetou provided an example of tactical finesse and prudence.

It’s also been suggested that Hitler’s demand for advanced technology in German weapons stems from Old Shatterhand having the equivalent of an assault rifle to combat the “evils” of the West that used simpler weapons.

Albert Speer, a close ally of Hitler’s, said that during times of hopelessness, Hitler continued to reach for the novels for comfort.

Unsurprisingly, May’s Wild West stories were rooted in racism and power. Winnetou and the other Native people were written as incompetent and in need of white salvation. In fact, Winnetou willingly converted to Christianity before his death in the final novel.

Winnetou and Old Shatterhand only encounter Germans during their travels, and Hitler may have read this as “proof” that if Germans could maintain control, the world would be saved. Some of those close to Hitler claim that he spoke frequently about Karl May, often talking about how indebted to May he was. 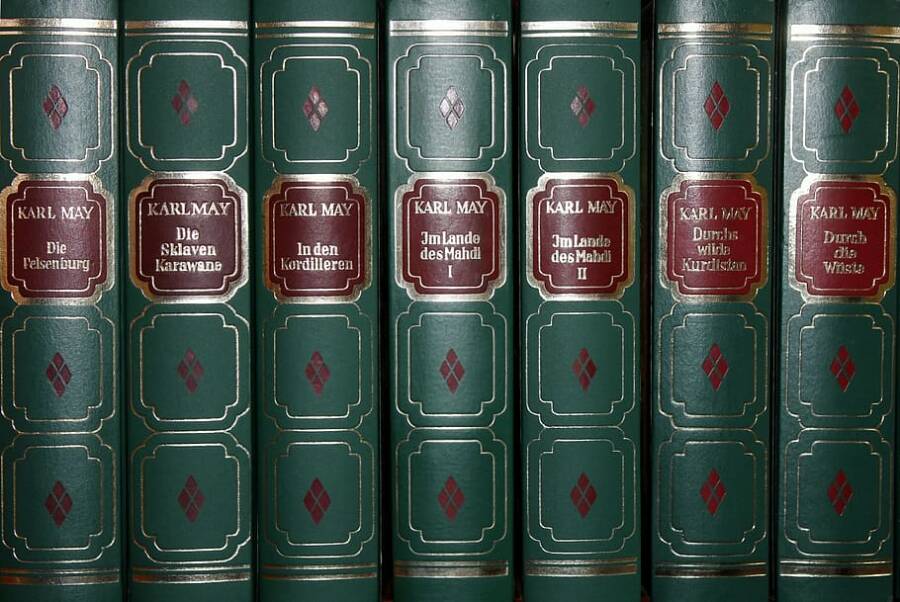 PxfuelA collection of Karl May’s novels, in the original German.

At the height of his career, May was one of the best-regarded popular fiction writers of his time. With the fortune he made from his stories, he built Villa Shatterhand in which to live out the rest of his life. In 1899, his earliest works were published without his permission, many of which skewed toward erotica. Worried his fans would no longer read his works, he sued for defamation of character.

But the case proved to be his demise, and his early life was soon discovered. He had told elaborate lies about being a frontiersman during the years he was really in jail for theft. In 1910, he wrote an autobiography to try to clear his name, and died two years later.

Though May’s reputation was tarnished, his stories remain popular. In the 1960s, Winnetou and Old Shatterhand made their way to the big screen as May’s books were turned into films.

Now, his works and life are celebrated at countless festivals throughout Germany. Though attendees recognize there are problems with May’s depictions of the West and of Native people and culture, the stories have become cult classics throughout Germany and across generations.

Still, it’s hard to forget the effect May had on the leader of Germany’s darkest hour.

After this look at Karl May, learn more about the Native American genocide. Then, discover the most astounding facts about Adolf Hitler.