Karla Homolka, The Sadistic Murderess Who Raped And Killed Teenage Girls — Including Her Own Sister

In the early 1990s, Karla Homolka and Paul Bernardo were known as the "Ken And Barbie Killers." Today, she volunteers with elementary school children. 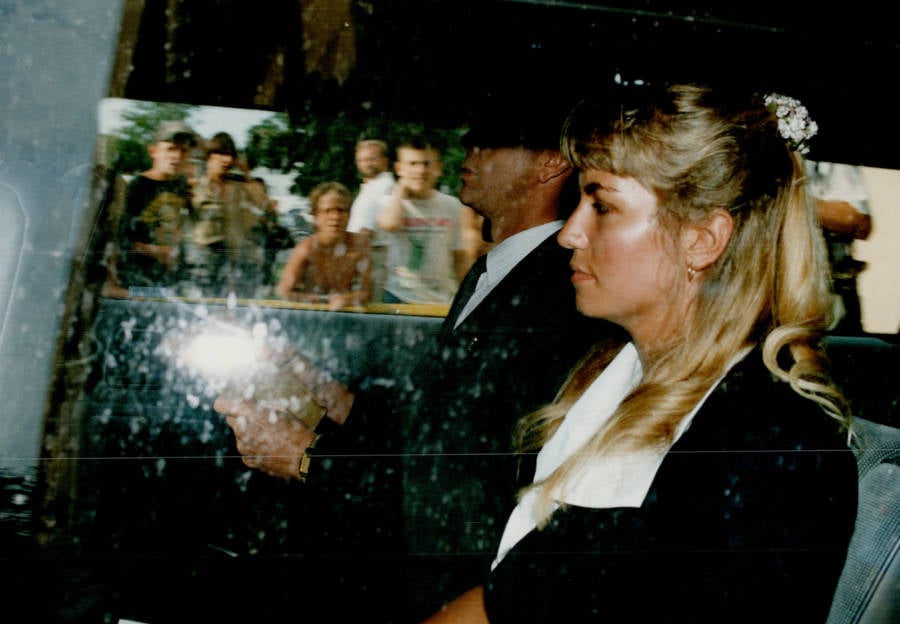 In December of 1990, veterinary technician Karla Homolka stole a vial of sedatives from the office where she worked. One night, as her family hosted a dinner party, she drugged her 15-year-old sister, carried her to the basement, and presented her to her boyfriend Paul Bernardo as a virgin sacrifice – literally.

From there, the sadistic acts between Homolka and Bernardo spiraled. They began a torture spree that lasted years and resulted in the deaths of several teen girls — including Homolka’s sister.

Together they were known as the Ken and Barbie killers. Separately, Bernardo became known the Scarborough Rapist.

But 30 years on, Karla Homolka today lives a completely different life. She settled comfortably in Quebec where she is a part of a quiet community and volunteers at a local elementary school.

It seems she’s come a long way from those days as one-half of the Ken and Barbie killers.

The Toxic Relationship Of Karla Homolka And Paul Bernardo 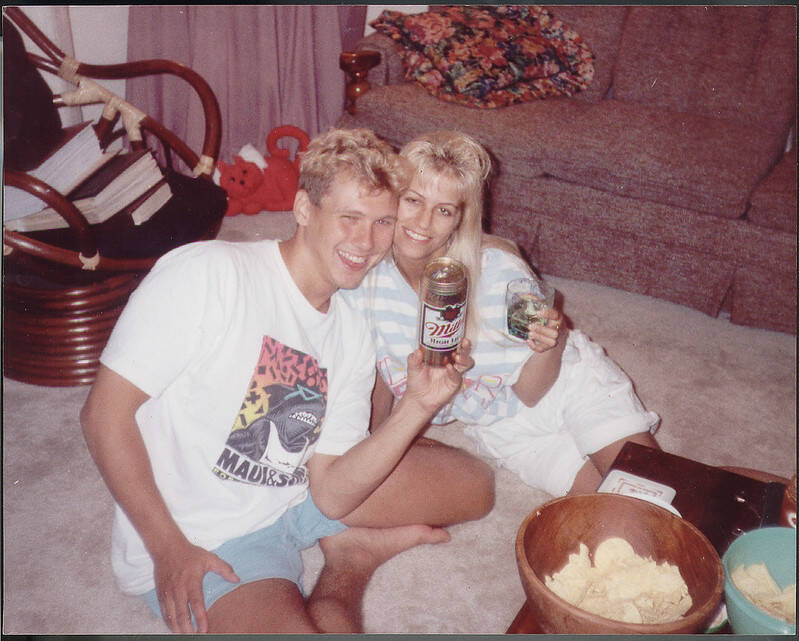 FacebookBernardo and Homolka met in 1987.

Many experts believe that Karla Homolka always had sociopathic tendencies. Those experts assert that it wasn’t until her late teens that Homolka’s dangerous tendencies revealed themselves.

In her early life, Homolka was, for all intents and purposes, a normal kid. Born May 4, 1970, she grew up in Ontario, Canada in a well-adjusted family of five as the oldest of the three daughters.

Her friends from school remember her as smart, attractive, popular, and an animal lover. Indeed, following her high school graduation, she began working at a local veterinary clinic.

But then, on a fateful mid-summer trip for work to a veterinary convention in Toronto in 1987, 17-year-old Homolka met 23-year-old Paul Bernardo.

The two connected instantly and became inseparable. Karla Homolka and Paul Bernardo also developed a shared taste for sadomasochism with Bernardo as the master and Homolka as the slave.

Some believed that Homolka had been coerced by Bernardo to commit the heinous crimes that later landed her in prison. It has been asserted that Homolka was merely yet another one of Bernardo’s victims.

But still others believe that Homolka entered into the relationship willingly and was every bit a sadistic criminal mastermind as he was. 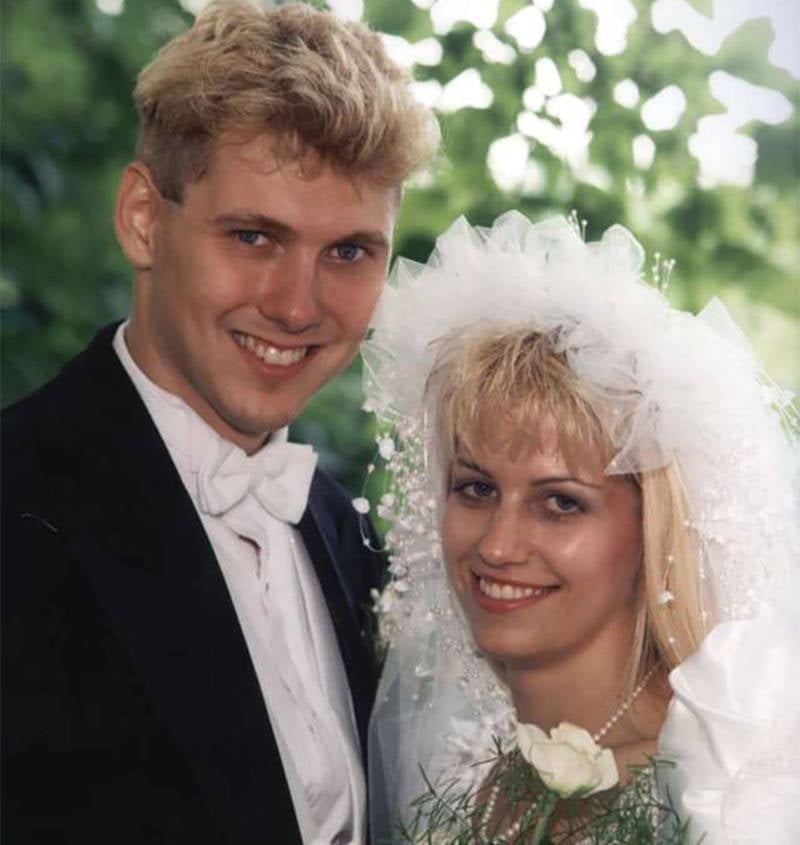 PostmediaKen and Barbie killers Paul Bernardo and his then-wife Karla Homolka on their wedding day.

What can’t be denied is that Karla Homolka willingly offered up her own sister to Bernardo. Bernardo had apparently been upset by the fact that Homolka had not been a virgin when they met. In order to make up for this, he allegedly ordered that Homolka bring him a girl who was a virgin — and Homolka decided upon her own sister Tammy.

On Dec. 23, 1990, Homolka’s family hosted a holiday party. Earlier that morning, Homolka had stolen vials of sedatives from the veterinary office where she worked. That night, she spiked her sister’s eggnog with Halcion and brought her downstairs to the bedroom where Bernardo was waiting.

However, this wasn’t the first time that Homolka had brought her sister to Bernardo. In July, she and Bernardo spiked the teenager’s spaghetti dinner with valium, but Bernardo had raped the younger sister for only a minute before she began to wake up.

The Ken and Barbie killers were thus more careful this second time around, and Bernardo held a rag coated in halothane up to Tammy’s face when she was brought into the bedroom that holiday night — and raped her while she was unconscious.

Likely due to the drugs, Tammy vomited whilst unconscious and then choked to death. In a panic, Bernardo and Homolka cleaned and clothed her body, laid her on the bed, and claimed that she had vomited in her sleep. Her death was consequently ruled an accident.

Sadistic Crimes Of The Ken And Barbie Killers 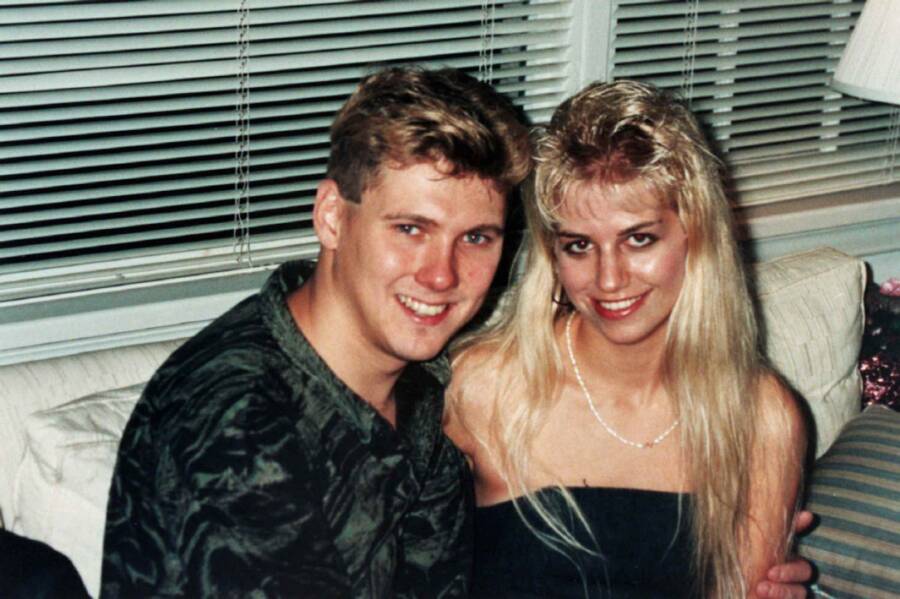 PinterestBernardo was obsessed with the 1991 Bret Easton Ellis novel, American Psycho and reportedly “read it as his Bible.”

Despite her family tragedy, Homolka and Bernardo were wed six months later in a lavish ceremony near Niagara Falls. Bernardo allegedly insisted that Homolka vow to “love, honor, and obey” him.

Karla Homolka also agreed to provide Bernardo with young victims. Homolka gifted her husband with another 15-year-old girl, a pet shop worker whom Homolka had met through her veterinary work.

On June 7, 1991, shortly after their wedding, Homolka invited the girl — known only as Jane Doe — to a “girls night out.” As the couple had done with Tammy, Homolka spiked the young girl’s drink and delivered her to Bernardo at the couple’s new home.

This time, however, Homolka raped the girl herself before Bernardo. Fortunately, the young woman survived the ordeal, though due to the drugs she didn’t know what had happened to her until later.

A week after the rape of Jane Doe, Paul Bernardo and Karla Homolka found their penultimate victim, a 14-year-old girl named Leslie Mahaffy. Mahaffy had been walking home after dark one night when Bernardo noticed her from his car and pulled over. When Mahaffy stopped him to ask for a cigarette, he dragged her into his car and drove the couple’s house.

There, he and Homolka proceeded to repeatedly rape and torture Mahaffy while videotaping the entire ordeal. Bob Marley and David Bowie played in the background. The videotape was deemed too graphic and disturbing to show at the eventual trial, but the audio was allowed.

On it, Bernardo can be heard instructing Mahaffy to submit to him while she cried out in pain.

At one point, Mahaffy can be heard commenting that the blindfold Homolka had placed over her eyes was slipping and that she might be able to see them and later identify them. Unwilling to let that happen, Bernardo and Homolka committed their first intentional murder. 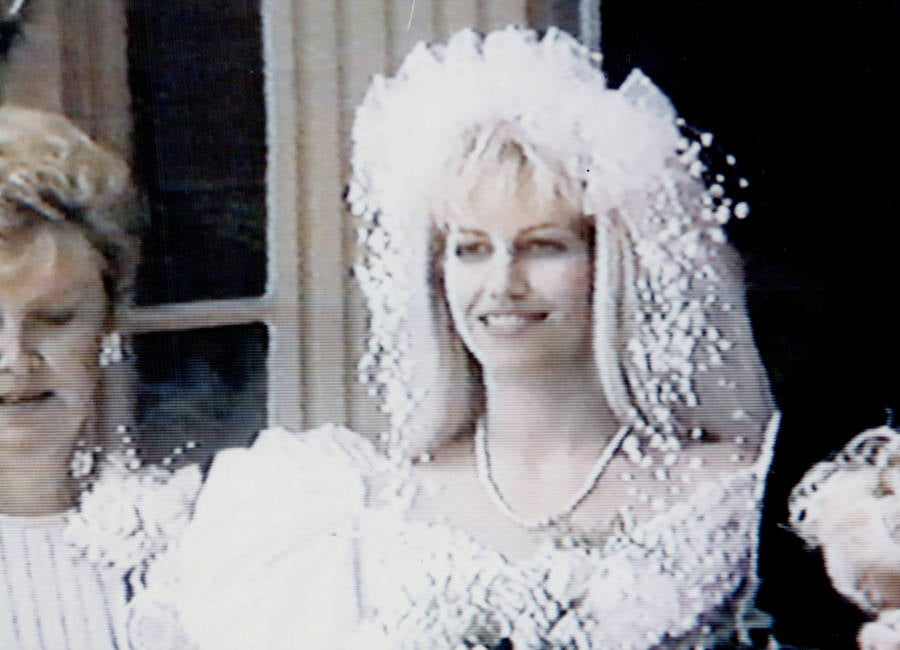 Dick Loek/Toronto Star via Getty ImagesKarla Homolka today may have a different view on this wedding ceremony.

Homolka drugged the girl as she had done in the past, but this time administered a lethal dose. Bernardo went to the local hardware store and purchased several bags of cement which the couple used to encase the dismembered parts of Leslie Mahaffy’s body.

Then, they dumped the body-filled blocks into a local lake. Later, one of these blocks would wash up on the lakeshore and reveal an orthodontic implant, which would identify Mahaffy as the couple’s third murder victim.

However, before that could happen, one more teenaged girl would fall victim to the murderous duo in 1992: a 15-year-old named Kristin French.

As they had done with Leslie Mahaffy, the couple filmed themselves raping and torturing her and forced her to consume alcohol and submit not only to Bernardo’s sexual deviances but to Homolka’s as well. This time, however, it appeared that the couple intended to murder their victim from the get-go as French was never blindfolded.

Kristin French’s body was found in April of 1992. She was naked with her hair cut in a roadside ditch. Homolka later admitted that the hair had not been cut as a trophy, but in the hopes that it would make it harder for the police to identify her.

Despite her hand in the rape and torture of four young girls and the murder of three, Karla Homolka was never actually arrested for her crimes. Instead, she turned herself in.

In December of 1992, Paul Bernardo beat Homolka with a metal flashlight, severely bruising and landing her in the hospital. She was released after insisting that she had been in an automobile accident, but suspicious friends of hers alerted her aunt and uncle that foul play may have been involved. 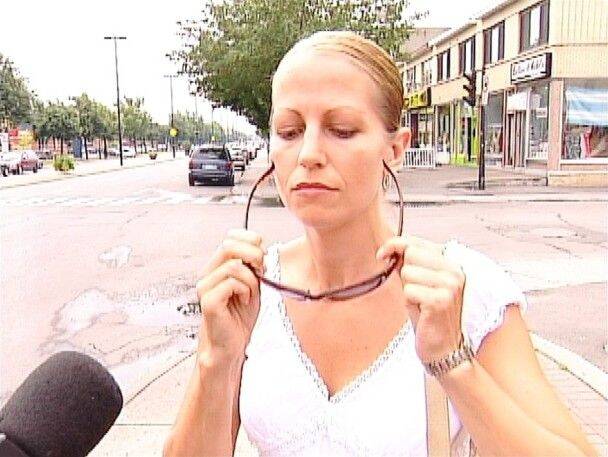 Global TVHomolka in a 2006 interview.

Meanwhile, Canadian authorities were in search of the so-called Scarborough Rapist and felt confident they had found their criminal in Paul Bernardo. He was subsequently swabbed for DNA and fingerprinted, as was Homolka.

During that period of questioning, Homolka learned the Bernardo had been identified as the rapist, and to protect herself, Homolka admitted to her uncle that Bernardo had abused her, that he was the Scarborough Rapist – and that she had been involved in several of his crimes.

Horrified, Homolka’s family insisted she go to the police, which she ultimately did. Immediately, Homolka began filling the police in on Bernardo’s crimes, including ones he had committed before they met that he had boasted about to her.

While their house was being searched, Bernardo’s lawyer wandered in and retrieved some 100 audio tapes from behind a light fixture on which the couple had recorded their heinous crimes. The lawyer kept those tapes hidden.

In court, Homolka painted herself as an unwilling and abused pawn in Bernardo’s horrific schemes. Homolka divorced Bernardo during this time and many jurors were inclined to believe that Homolka was indeed nothing more than a victim.

She reached a plea bargain in 1993 and was sentenced to 12 years in prison with eligibility for parole after three years of good behavior. Canadian press deemed this choice on behalf of the court a “Deal with the Devil.”

Karla Homolka now continues to receive backlash for what many have dubbed “the worst plea deal in Canadian history.” 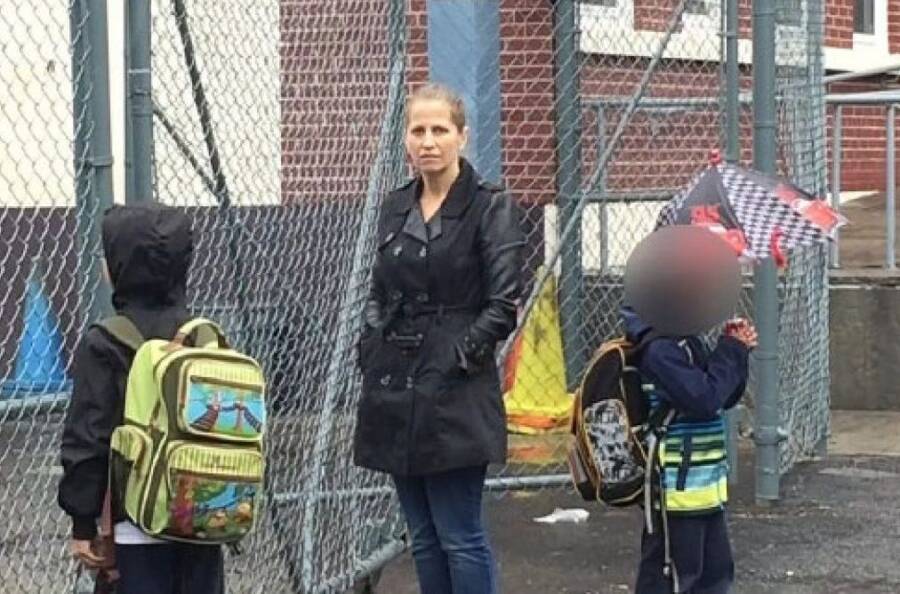 Karla Homolka filmed outside of the school her children attend.

Paul Bernardo was convicted on almost 30 counts of rape and murder and received a life sentence on Sept. 1, 1995. In February 2018, he was denied parole.

Homolka was released in 2005 to outrage from the public, much of which had been ongoing since her short sentence was announced. After her release, she remarried and settled into a small community in Quebec.

Karla Homolka now has, in some respect, become a victim to this community. Neighbors began a Facebook page titled “Watching Karla Homolka” in an effort to track her whereabouts out of fear and anger of her freedom. She has since changed her name to Leanne Teale.

She spent some time in Antilles and Guadalupe under the name Leanne Bordelais with her new husband, but as of 2014, had returned to the Canadian province where she spends time evading the press, hanging out with her family of three children, and volunteering on her children’s field trips.

Karla Homolka now seems far from those torturous days of the Ken and Barbie killers, though one can only hope that is so.

For more macabre after this look at Ken and Barbie killers Paul Bernardo and Karla Homolka now, check out some of the best serial killer documentaries that you can find on Netflix. Then, read about Sally Horner, whose kidnap and rape inspired “Lolita.”