Inside The Extraterrestrial Tale Of The 1955 Kelly-Hopkinsville Encounter

On August 21, 1955, the Kelly-Hopkinsville UFO incident terrified the people of western Kentucky and introduced the world to "little green men."

Around 11 PM one August night in 1955, eight people showed up at the Hopkinsville, Kentucky police station in a state of panic. “We need help,” one gasped. “We’ve been fighting them for nearly four hours.”

Fighting who? Apparently, little silver men. To some, the Kelly-Hopkinsville encounter provides compelling evidence of alien contact. Others see it as an overreaction ⏤ perhaps fueled by moonshine ⏤ to an owl attack. 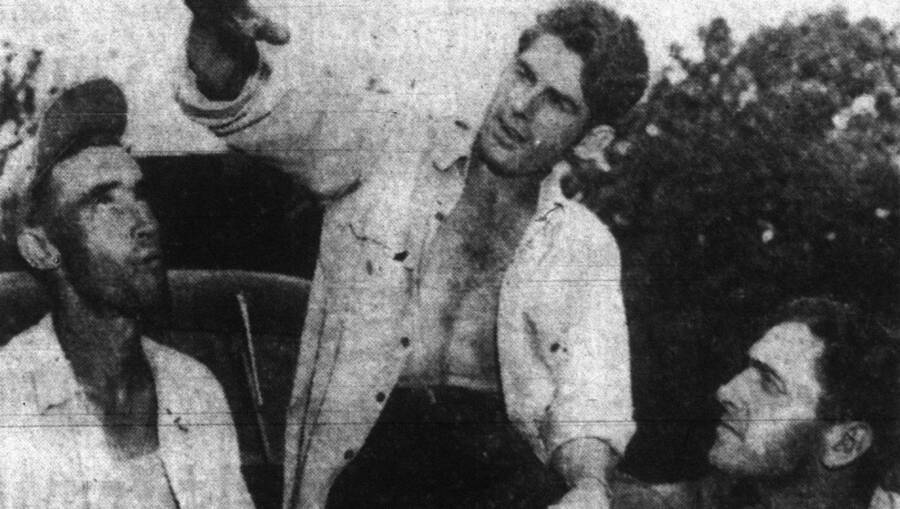 What’s certain is that the intrigue around the event has lingered. Today, the 300-odd citizens of nearby Kelly, Kentucky throw an annual “Little Green Men” Days Festival every August. The trope of aliens as “little green men” comes from the incident. And even Steven Spielberg drew inspiration from the encounter as he made E.T.

So, what exactly happened on that 1955 summer night in Kentucky? 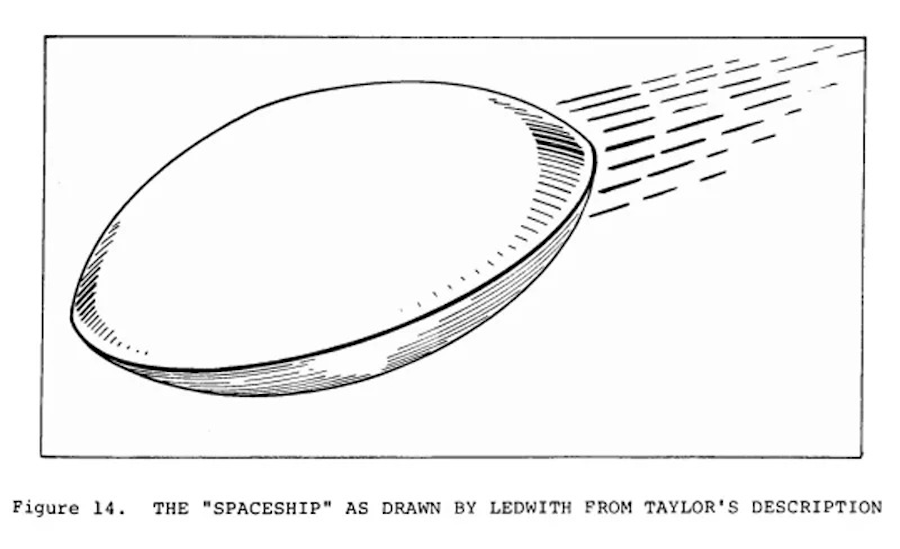 The tale of the Kelly-Hopkinsville incident starts innocently enough.

While visiting a friend named Elmer “Lucky” Sutton at his farmhouse in the tiny town of Kelly on August 21, 1955, Billy Ray Taylor of Pennsylvania went outside to the well to collect some water. Then, something streaking across the sky caught his attention.

Taylor later described the silvery object as “real bright, with an exhaust all the colors of the rainbow.” Panicked, he fled indoors and told the others, which included his wife and the Sutton family, that he’d just seen a UFO.

Taylor also recalled that he hadn’t heard an explosion, just a hissing noise as the object landed somewhere behind the farmhouse. But no one took Taylor seriously ⏤ until the dogs began to bark. Someone, or something, was approaching the house.

The terrified group later described to police what they saw in vivid, frightening terms. The invaders had round “oversized” heads and long arms with talons that nearly touched the ground.

Everything about them seemed to shimmer and glow in the darkness: their eyes had “yellowish light” and their bodies glinted like they were made of “silver metal.”

And they were getting closer.

But those gathered at the Sutton farmhouse weren’t going to go down without a fight. Sutton and Taylor grabbed guns. When one of the creatures pressed its face against the window, they started to fire. 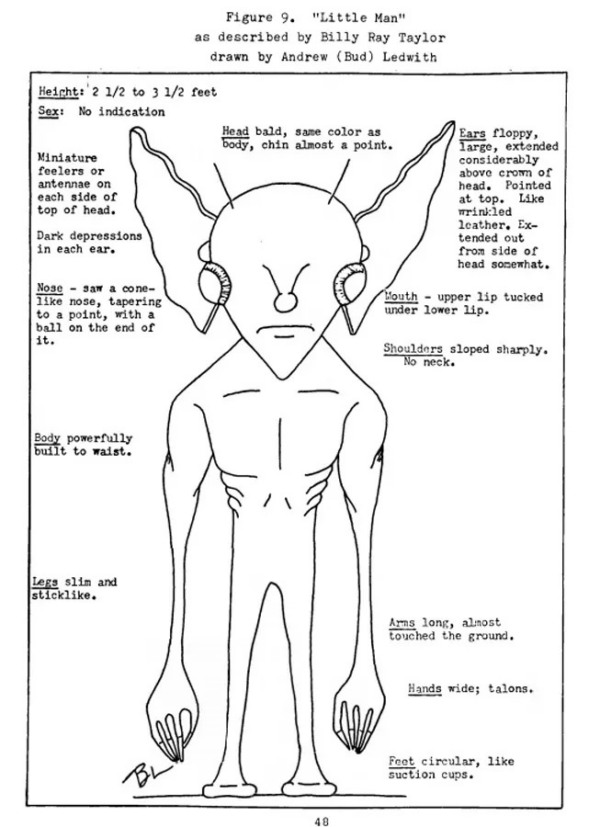 Over the next few hours, the aliens drew close and then retreated. They flipped up into the trees when the humans tried to shoot them. One reached down and grabbed Taylor’s hair. Finally, when all seemed quiet, several people piled into a car and fled into town to beg the police for help.

Four city police, including the chief of police, Russell Greenwell, drove out to the Sutton farmhouse to see what had happened. Aliens or not, the crowd at the police station had seemed genuinely terrified: one man had a pulse of 140 beats per minute. “These aren’t the kind of people who normally run to the police for help,” Greenwell noted.

As noted in the Kentucky New Era the next day, nothing stirred during the investigation. Besides one of the officers accidentally stepping on a cat’s tail in the darkness outside the house, no further excitement ensued.

However, at least one Kentucky police officer believed Taylor and Sutton’s story. Seargent Frank Dudas was not among the officers who visited the Sutton farmhouse, but he’d had his own alien encounters. The summer before, Dudas and another officer reported seeing three flying saucers.

“I think the whole story is entirely plausible,” Dudas told the Kentucky New Era. “I know I saw [the saucers]. If I saw them, the Kelly story could certainly be true.”

According to that same article, other officers were “reluctant” to give their opinions.

So, what could possibly explain what Taylor, Sutton, and the others had seen?

Theories About The Incident 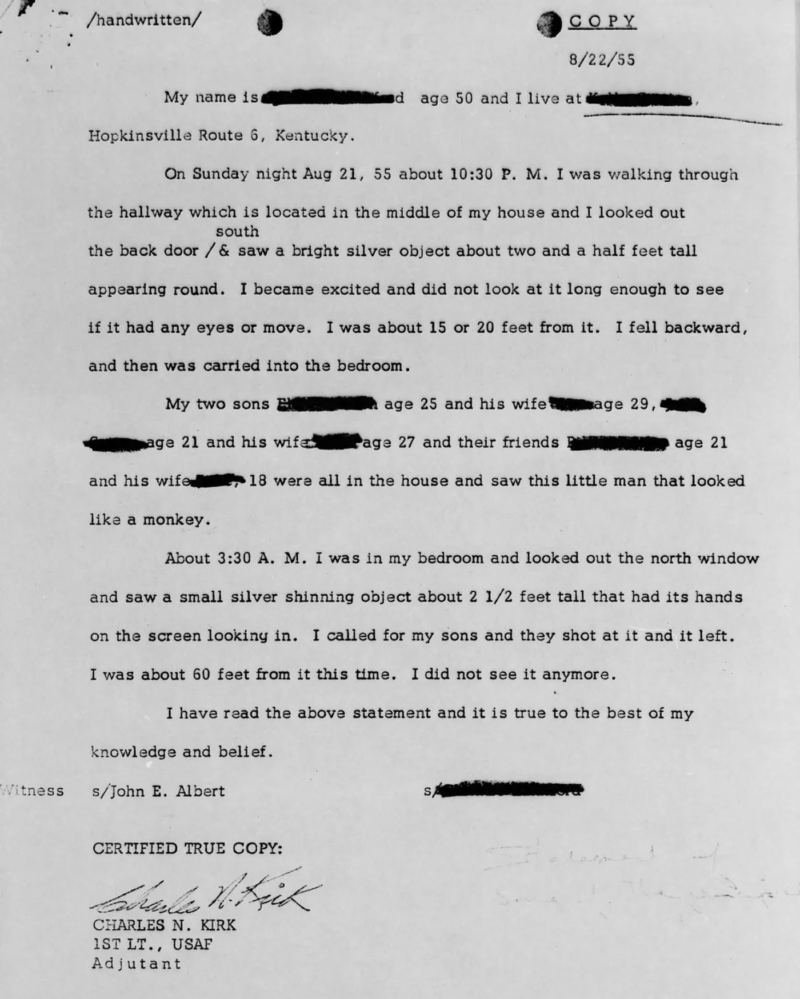 The validity of the Kelly-Hopkinsville encounter was questioned immediately. Some people doubted the honesty of the Suttons, and neighbors dismissed the whole affair as a drunken debacle and the result of too much moonshine.

“The lies they told about us,” lamented Glennie Lankford, Sutton’s mother, who was also present during the incident.

“[They] said we were drinking,” but Lankford knew what she had seen. “[The aliens] looked like a five-gallon gasoline can with a head on top and small legs,” she insisted. “It was a shimmering bright metal like on my refrigerator.”

Even police who responded to the scene agreed that it didn’t appear that anyone had been drinking.

But when the Sutton family tried to profit off interest in the story by charging admission to their farmhouse, any remaining goodwill toward them vanished. Neighbors grew cold and threatening. Ten days later, the Suttons left Kelly for good.

So, if it wasn’t aliens or alcohol, what had happened during the Kelly-Hopkinsville incident? 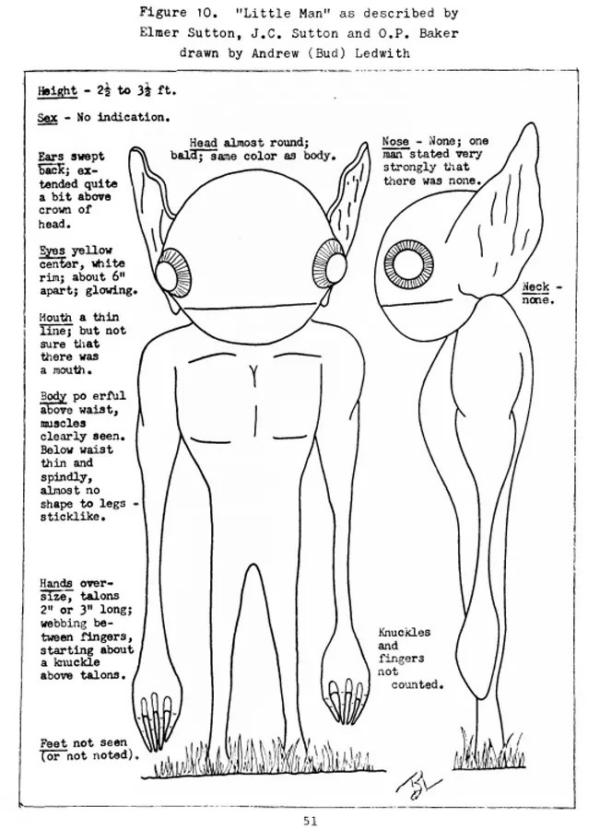 One explanation does involve a creature from the sky: an owl. Great Horned Owls have long wings, glowing eyes, and round heads. Could the people at the Sutton farmhouse have mistaken this owl for an alien in the darkness?

Another theory also involves an animal. Arthur “Hoss” Cansler, a sheriff from a nearby town, joined other policemen at the Sutton farmhouse on Aug. 21, 1955, for the investigation.

In his telling, everyone was drunk and some were tossing a cat onto a screen door to scare the people inside. “When I saw [the Suttons’ daughter] reach up and pull that cat off the screen, and the cat scream, I knew then that that was the Martian,” he told the Kentucky New Era on July 12, 2003.

This theory relies, again, on the fact that the witnesses were inebriated. Joann Smithey, a current Kelly resident who helps put on the annual “Little Green Men” Days Festival doesn’t think that this theory has any validity.

“We all laugh at [the idea they were drunk],” Smithey said. “Because [Glennie Lankford] didn’t allow alcohol, or even cursing, on her property. [The Suttons] were a very quiet, trustworthy family.”

More than 50 years after the Kelly-Hopkinsville encounter, the truth about what happened is more elusive than ever. But that hasn’t stopped people from wondering ⏤ and celebrating ⏤ what might have happened on that hot August night.

The Legacy Of The Kelly-Hopkinsville Encounter 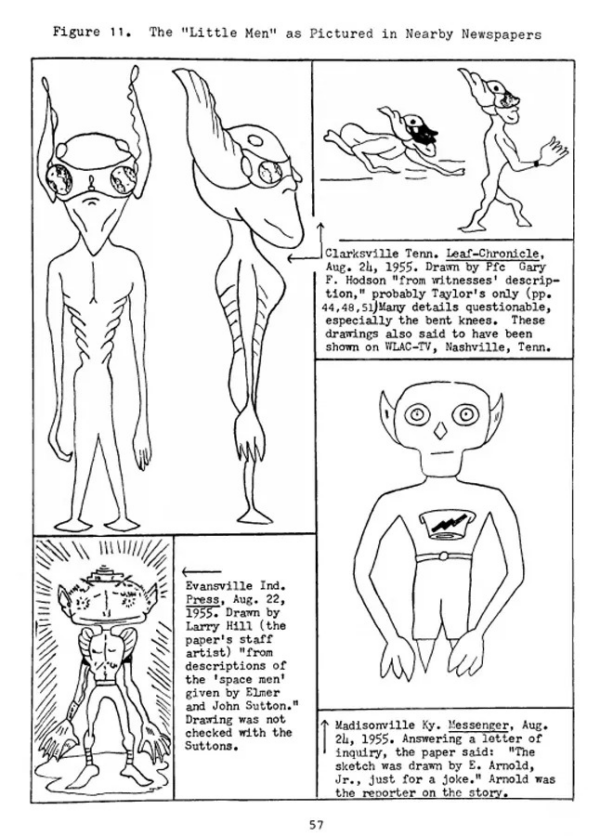 The incident, and its ensuing coverage, helped to solidify the idea of aliens as “little green men” in popular culture. Although Taylor and the Suttons described the aliens as “little silver men,” newspapers ran with “little green men” instead. That may be because the idea of green aliens had been around since the 1920s, with the birth of science-fiction.

There are those who still don’t think the incident was science-fiction, however. “There are millions of stars and planets in [the] universe,” said Geraldine Sutton Stith, the daughter of Lucky Sutton. “I can’t possibly believe ours is the only planet with life.”

Today, Stith is determined that the world hears her family’s side of the story. The remaining survivors of the encounter refuse to talk about the incident, so Stith does it for them. In addition to her books on the encounter, Alien Legacy (2007) and The Kelly Green Men: Alien Legacy Revisited (2015), she speaks at Kelly’s “Little Green Men” Days Festival every year.

The annual festival draws a few thousand people, and the story remains enticing to producers looking for next big thing. For example, Steven Spielberg’s classic film, E.T., supposedly has its origins in the encounter.

Other films, including Close Encounters of the Third Kind, Signs, Gremlins, Critters, and Poltergeist were also inspired by it. An episode of The History Channel’s Project Blue Book focused on the incident, and there’s a new movie titled The Visitants, which is set to start filming later in 2021 about the encounter.

And where is The Visitants filming? None other than Hopkinsville, Kentucky. Perhaps they’re hoping for another extraterrestrial visit.

After learning about the Kelly-Hopkinsville encounter, read about nine of the most convincing alien abductions. Then, learn about the unexplained disappearance of Frederick Valentich.