"Skokholm is producing some amazing prehistoric finds. It seems we may have an early Bronze Age burial mound built over a middle Stone Age hunter-gatherer site." 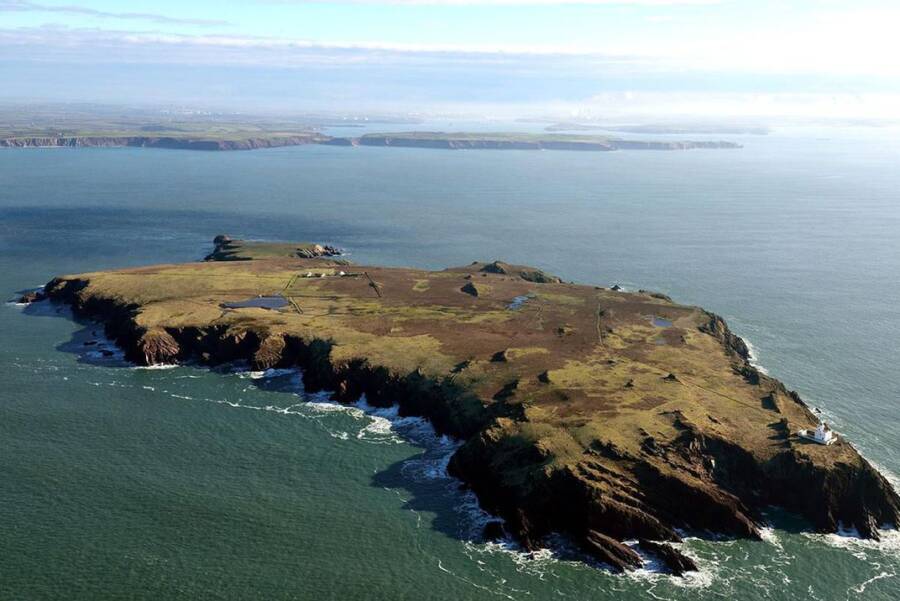 Crown Cherish ProjectSkokholm Island typically allows a select number of visitors to spend the night, but COVID-19 lockdowns have reduced its population to only two wardens — and a bunch of rabbits.

In a first-of-its-kind discovery this month, a herd of rabbits accidentally found a cache of 9,000-year-old Stone and Bronze Age artifacts buried on the remote Welsh island of Skokholm.

Skokholm Island sits in the Celtic Sea to the west of mainland Wales and is two miles off the Pembrokeshire coast. It is currently only inhabited by two wardens, seabird experts Richard Brown and Giselle Eagle, who made the startling discoveries.

According to The Guardian, Brown and Eagle were making their usual patrol of the area when they discovered an artifact at the entrance of a rabbit burrow right by the island’s cottage. 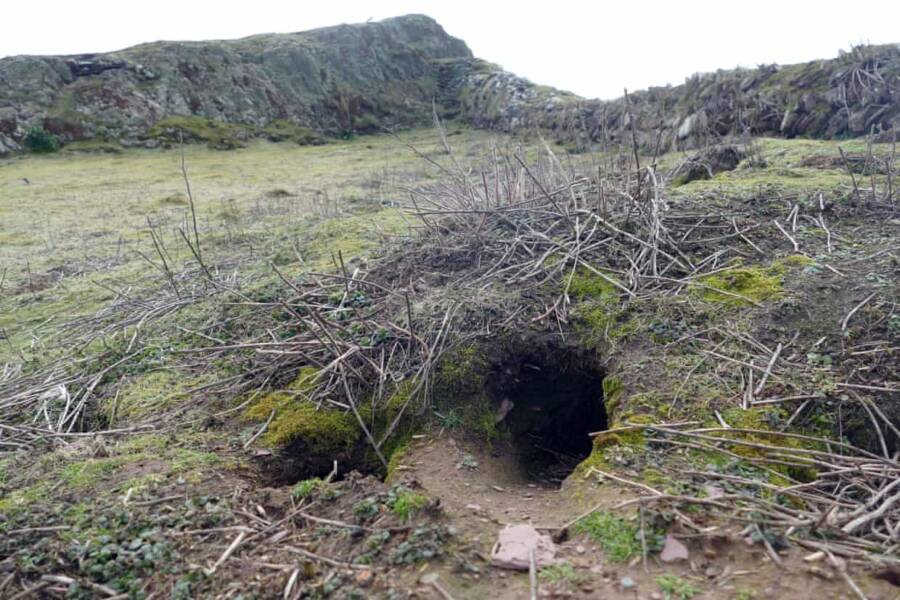 Richard Brown and Giselle Eagle/WTSWWThe discoveries were made at the same rabbit burrow which was apparently dug into an ancient hunter-gatherer site.

The wardens sent pictures of the piece to experts on the mainland, who identified it as a Mesolithic tool.

The tool was what researchers call a “beveled pebble,” and has since been estimated to be around 6,000 to 9,000 years old. Experts believe it was used by Stone Age hunter-gatherers to craft boats out of seal hides as well as to prepare foods like shellfish.

According to Andrew David, an expert who examined the prehistoric tool virtually, similar items have been found at coastal sites nearby, including Pembrokeshire and Cornwall, but this is a historic first for Skokholm Island.

However, the discoveries didn’t stop there. 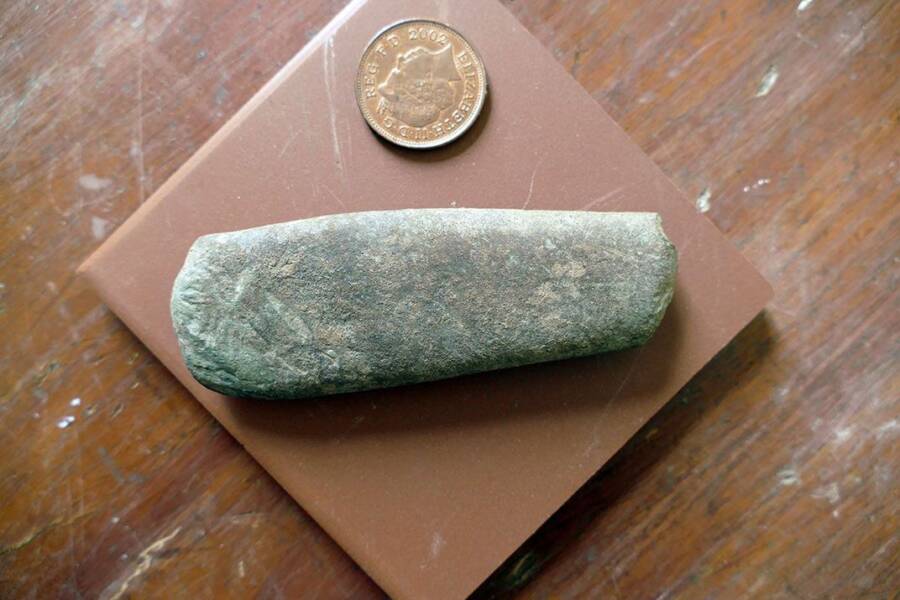 Richard Brown and Giselle Eagle/WTSWWThis particular tool is believed to have been used to prepare shellfish and bolster ancient watercrafts with animal skin.

Indeed, just a day later, Brown and Eagle spotted a second round of items at the entrance to the same rabbit burrow which included yet another Mesolithic-era stone tool and sizable pieces of pottery.

The wardens sent photos of these to the curator of prehistoric archaeology at the National Museum of Wales, Jody Deacon. She identified the pottery pieces as relics from a 3,750-year-old burial urn from the Early Bronze Age.

One particularly large fragment was found to have come from a rather thick pot. It was decorated with lined incisions, leading Deacon to conclude that it was likely used for cremation rituals.

For Toby Driver, an archaeologist at the Royal Commission of Wales, the discoveries ultimately suggest that the island’s cottage was built atop an ancient burial site which itself was built on top of an even older site.

“Skokholm is producing some amazing prehistoric finds,” he said. “It seems we may have an early Bronze Age burial mound built over a middle Stone Age hunter-gatherer site. It’s a sheltered spot, where the island’s cottage now stands and has clearly been settled for millennia.” 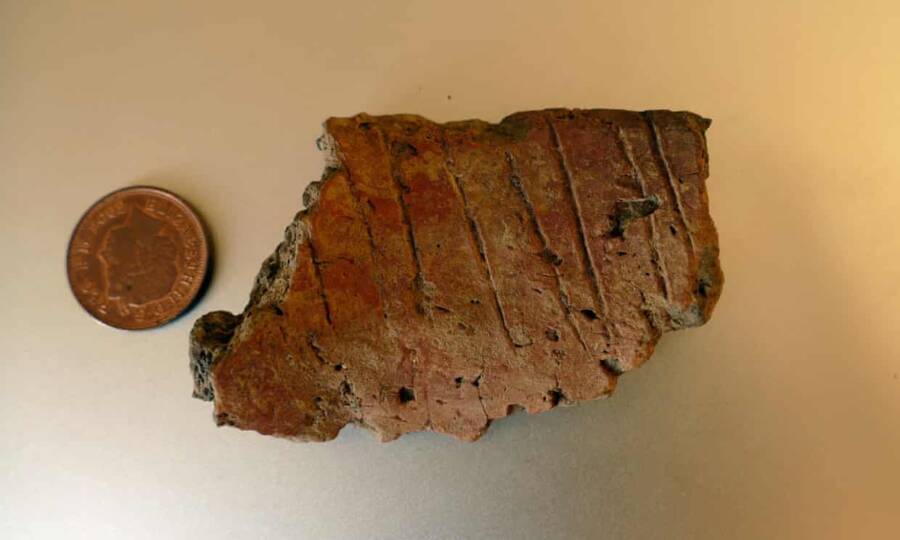 Richard Brown and Giselle Eagle/WTSWWExperts believe this pottery fragment belonged to a funerary urn, an artifact never before found on Skokholm Island.

Finding prehistoric burial urns in Wales isn’t all that unusual. Discovering them on Skokholm, meanwhile — or on any of the western Pembrokeshire islands — is unprecedented.

Brown and Eagle, who moved to Skokholm Island in 2013, are helping to uncover more about the island’s ancient past.

While it’s barely a mile long and half a mile across, Skokholm Island has a fascinating history. The name itself is Norse, given by the Vikings who settled there in the late 10th or early 11th century. Then, Skokholm became a rabbit farm around the 15th century.

In 2006, the Wildlife Trust of South and West Wales purchased the isle in order to conserve it as a national nature reserve. While it’s typically open for a restricted number of visitors to spend the night, the coronavirus pandemic has left Brown and Eagle on their lonesome and documenting their observations on a blog.

These miraculous discoveries might lend some credence to the age-old superstition that rabbit’s feet bring luck. Experts are eager to find out for themselves, with a fresh, exhaustive survey of Skokholm Island later this year. However, they will have to wait until pandemic lockdowns are lifted.

After reading about how a bunch of Welsh rabbits accidentally unearthed Stone and Bronze Age artifacts on a remote island, learn about a new discovery indicating that Stonehenge originated in Wales. Then, read about Okunoshima, Japan’s “Rabbit Island.”