Okunoshima was once used as a top-secret location for chemical weapons testing. All that remains today are thousands of feral rabbits, whose lives may still be in grave danger. 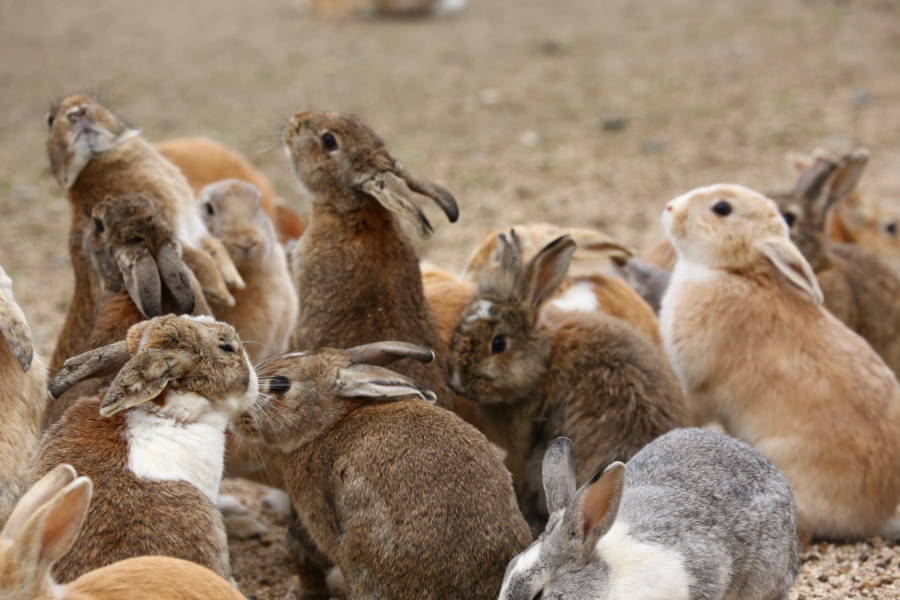 Okunoshima the small island about two miles off the coast of Takehara in Hiroshima Prefecture, allows rabbits to roam freely. Also known as Usagi Jima, or Rabbit Island, Okunoshima attracts animal lovers from all over the world to spend some quality cuddle time with its large population of feral rabbits.

But the island of Okunoshima also harbors a dark, imperial secret from World War II.

Rabbit Island is accessible by a 15-minute ferry ride from Japan’s mainland. Once there, tourists can interact with the rabbits, feed them, and pet them. Current estimates put the number of rabbits at over 1,000. 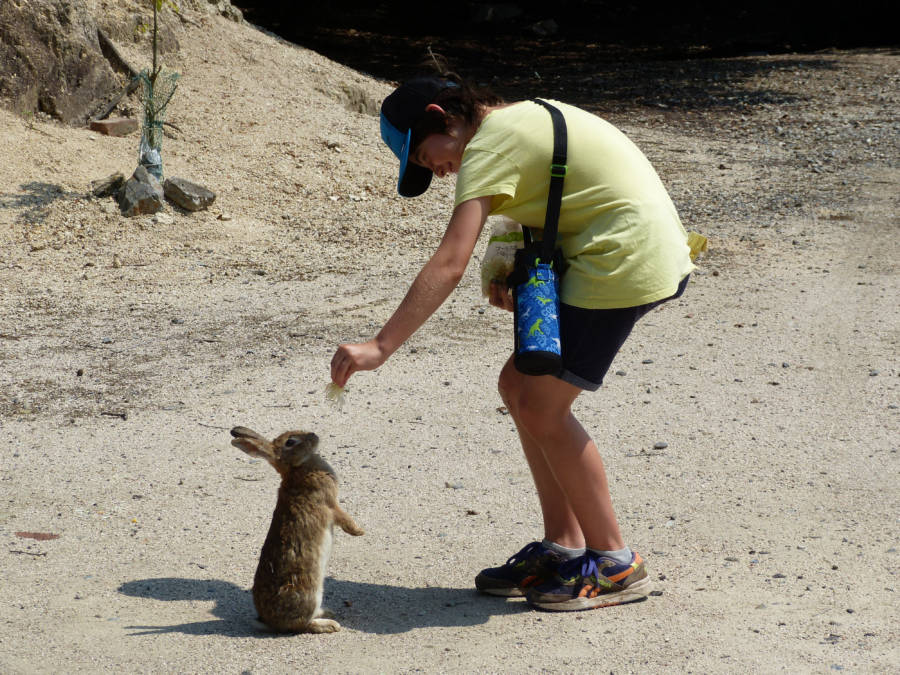 jj-walsh/Flickr.comA tourist feeds a rabbit on Rabbit Island in September 2016.

The locals on the island encourage tourists to interact with the rabbits as much as possible. There are tons of videos about the place, including one such viral video from 2014 of a horde of rabbits following a woman with a bag of food.

The bunny love is unceasing as there are no predators on Okunoshima. The constant influx of tourists willing to spoil the rabbits has precipitated an unsustainable population boom of rabbits. There are no cages and the rabbits aren’t kept as pets, in fact, officials on the island warn people not to pick up or hold the rabbits, as they often will struggle to break free.

Okunoshima isn’t exactly a rustic wildlife refuge, either. Rabbit Island has roads, buildings, and a hotel. It’s a part of Japan’s National Park Resort system in the middle of the Seto Inland Sea of Japan.

While Rabbit Island now is mostly a place of fluffy joy, it harbors an unfortunate history, and tourists have a chance to explore that while on the small island.

How exactly the European rabbits came to the island in the first place is a bit of a mystery. However, most historians believe that the Japanese government brought rabbits to the island starting around 1929 for chemical weapons testing. Okunoshima served as a testing facility for poison gas namely mustard gas, and produced more than six kilotons of the stuff during WWII— which was all tested on the rabbits. 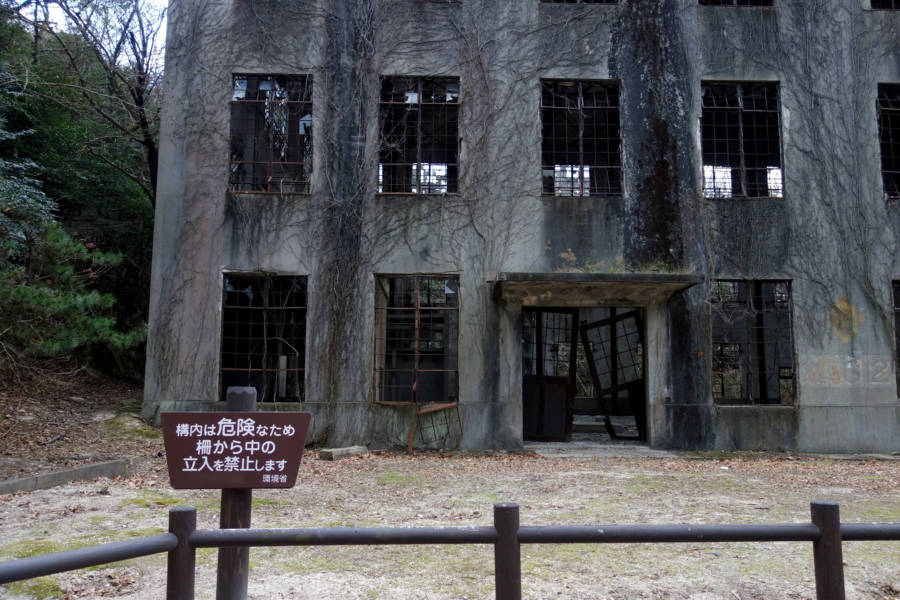 Workers on the island were sworn to secrecy. The government even erased the island from official maps to keep the project under wraps. Historians estimate that the poison gas manufactured on the once-dubbed “Poison Gas Island” killed as many as 80,000 people during Japan’s invasion of China in the 1930s.

Then during the occupation after World War II, the American military euthanized some 200 rabbits still kept there. The Japanese government never fully decontaminated the island, though. The local water supply may have traces of poison gas in it that could kill the rabbits or even affect humans. 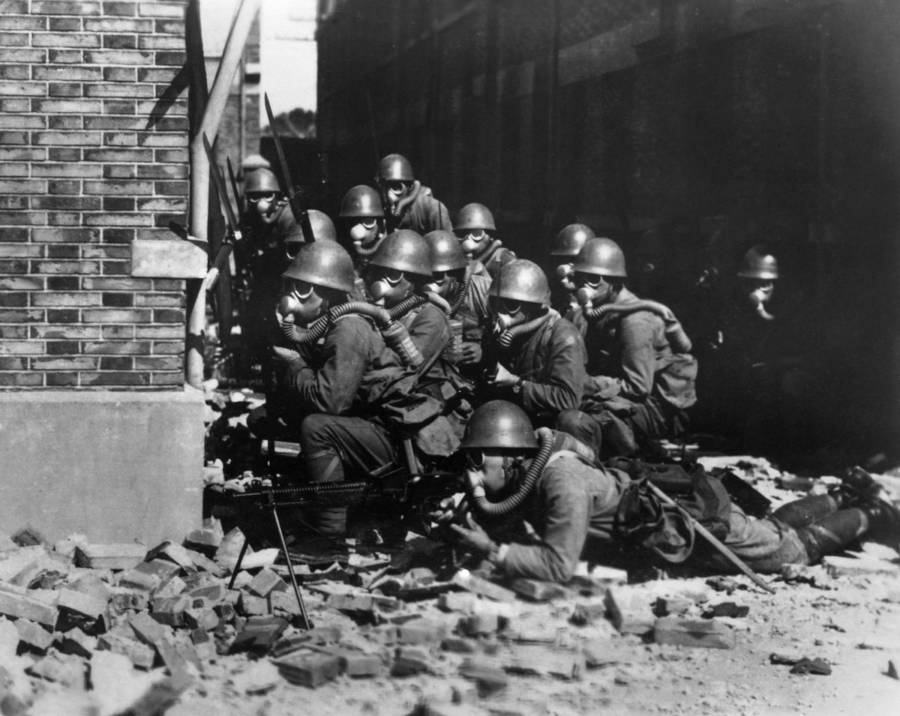 Wikimedia Commons Japanese Special Naval Forces at the Battle of Shanghai in 1937.

But a group of school kids who released eight rabbits onto the island in 1971 may have contributed to its rebirth and flourishing of bunny populations. By 2007, experts believed that there were 300 rabbits living on the island. The population continued to grow as the government banned new animals on the island as well as hunting.

The Future Of Rabbit Island Is Dark, Too

But the booming population of the rabbits also poses a danger to their future. There is not enough vegetation left on the island to sustain such a large — and growing— population of rabbits that roam the island.

The rabbits also depend deeply on human visitors for food, which is often in erratic supply. People bring cabbage, which isn’t the best food for rabbits because they require a lot of fiber. Rabbits also need to eat every day. On warm days, the rabbits may see an overabundance of food. On cold days, there may be nothing at all if no one comes to the island. 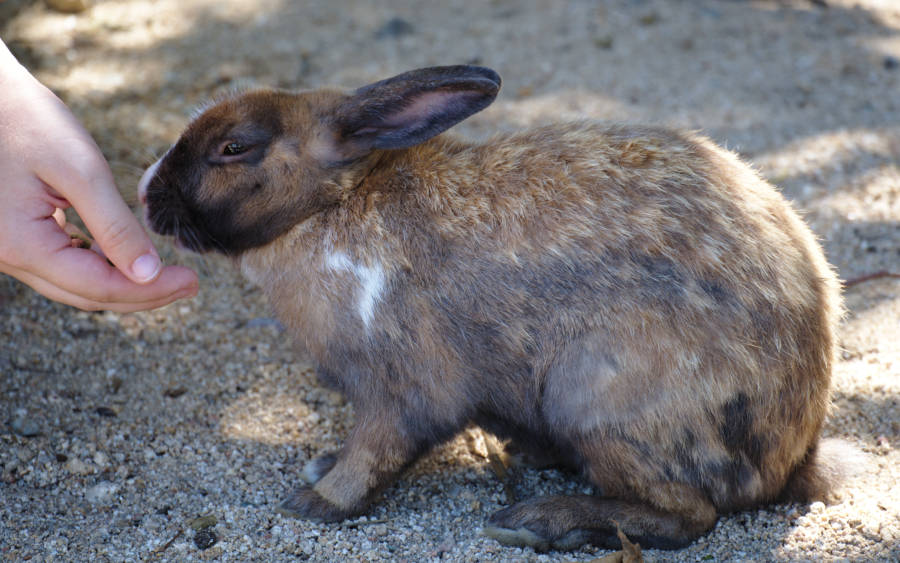 It’s feast or famine for the rabbits of Rabbit Island unless something can be done. While normal life expectancy for the animals is around 10 years in domestic life, these bunnies only live two years.

Despite viral videos of the soft creatures mobbing tourists, that type of action isn’t necessarily for fun and games. Those rabbits are hungry and thirsty, and they clamor for as much food as tourists can give them.

“We continue to wrestle aiming at the coexistence of the wild animal with organizations,” Takashi Seki at the Ministry of the Environment reported. “Excessive artificial intervention is undesirable.”

Indeed, in the case of a brighter future for these rabbits, here’s to “hopping.”

Check out Japan’s abandoned Hashima Island for more dark secrets from the country’s industrial past or see how abandoned pet bunnies are taking over Las Vegas.