Abandoned Bunnies Are Multiplying And Taking Over Las Vegas

The biggest problem facing Sin City may not be what you think it is.

Las Vegas haters have always had a laundry list of problems to point at in making their case — but the city’s bunny problem may be one of the strangest of them all.

Overwhelmed owners are dumping their pet bunnies in the yards and parks of Sin City, and because they multiply quickly, they’re not only evading capture but also wreaking havoc on the properties they now inhabit.

While an abundance of rabbits may initially sound like a relatively insignificant issue for city officials to contend with, the reality is anything but. Much like the monster goldfish that have taken over Australia’s Vasse River, the wild, feral bunnies were once pets — or the descendants of pets — whose owners released them into the wild.

Usually dumped in city parks, golf courses, and parking lots, a few bunnies have quickly turned into a few thousand, and are now considered an invasive species.

Experts believe that the bunny boom is the result of their easy acquisition as pets and their tendency to mate, well, like rabbits. At many pet stores across the country, anyone can purchase their very own bunny for around $35, a small price to pay for a cute and furry little thing to love and call your own.

However, bunny care can make for an intensive project, requiring constant litter changes, cleaning, and bunny-proofing of the living areas should you decide to allow your little one to roam and hop around your abode. As their abundance in the wild shows, this maintenance can be a bit much for bunny owners.

Once released into the wild — and surrounded by potential mates — it takes just 30 days for a pregnant rabbit to complete her pregnancy and give birth to up to 14 kits, or babies. Almost immediately after, the female can become pregnant again.

Free to roam as they please, this biological trait makes for a logistical nightmare, as the now-feral offspring multiply in droves. The scarcity of food often leads to aggressive territorial behavior, and bunnies are often forced to fight against each other for food or starve to death.

Their sheer abundance has also drawn predators such as coyotes into the city, which has resulted in the deaths of additional house pets such as cats and dogs. 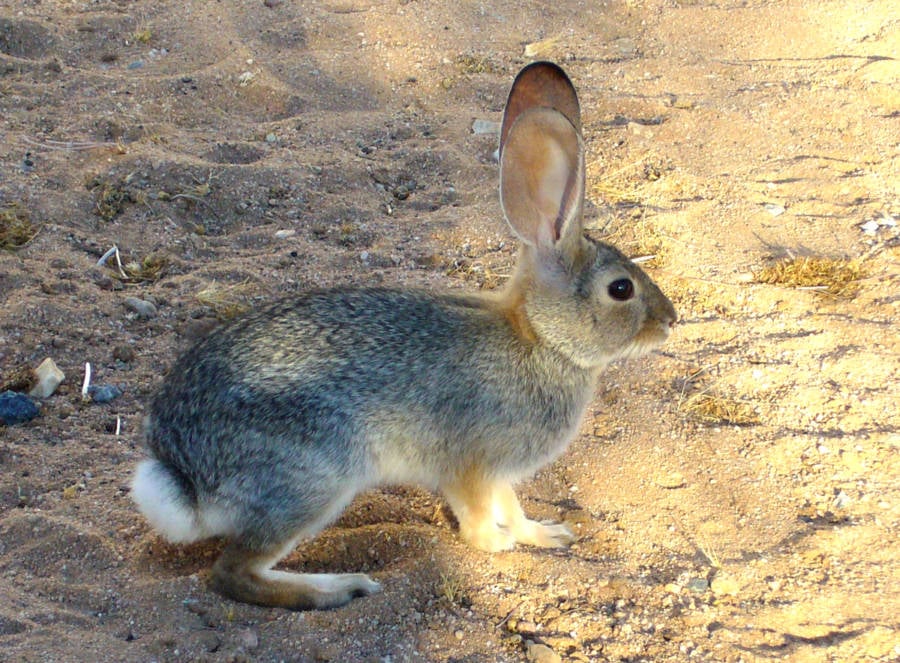 In addition to the long-term ecological changes that the now-feral bunnies have exacted on Las Vegas, they are making constant work for the rescue groups which volunteer their time and resources to keep them healthy.

At a state mental health facility, a woman named Stacey Taylor, who runs the Facebook group “Bunnies Matter in Vegas Too,” makes regular rounds at various feeding sites around the complex, offering hay, lettuce, carrots, and other bunny-friendly veggies to the one thousand or so bunnies that call the property home. “I might not ever solve the problem, but I’m not going to quit,” Taylor said in an interview with the Las Vegas Review-Journal. “It’s our fault, the humans’ fault, that they’re here.”

Caretakers agree that state government needs to provide money and appropriate legislation to curb the growing problem. Taking a cue from the many “trap, neuter, and release” programs across the country, which are dedicated to keep stray and feral cat populations under control, bunny advocates are hoping to add the program to meet their needs in Las Vegas, but the costs of operation are simply too high to manage without help.

In the meantime, volunteers are doing their best to remain in good health, to educate the community about the dangers of releasing domesticated house pets into the wild, and to encourage anyone looking to add a bunny to their home to adopt one in need, not shop from a pet store.

Next, see what Australia is doing to combat its own bunny problem. Then, from killer fish to man-eating snakes, check out nine invasive species that are overrunning America.