MMA fighter Kirill Tereshin thought injecting his upper body with petroleum jelly might give him an edge. Instead, it destroyed his muscle tissue and has caused serious health problems. 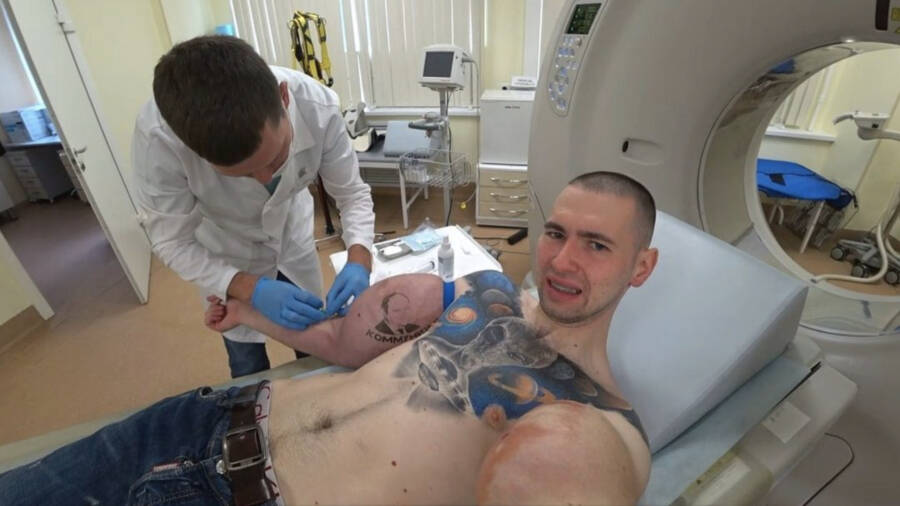 ruki_bazuki_official/InstagramKirill Tereshin could face amputation or even death death if the hardened petroleum jelly he injected into his biceps isn’t removed.

Petroleum jelly is typically found in products like Vaseline and helps to heal dry skin. However, bodybuilders like Kirill Tereshin have found alternate uses — like injecting it to cosmetically enlarge muscles. But Tereshin, dubbed the real-life Russian “Popeye,” now faces life-threatening health complications as a result.

Tereshin began injecting himself with petroleum jelly five years ago when he was 20 years old. With a fledgling career as an MMA fighter and hundreds of thousands of followers on Instagram, where he goes by “Bazooka Hands,” the former soldier became a worldwide curiosity.

Two years ago, however, he received dire warnings to remove the substance. According to doctors, he had injected each arm with three liters of Synthol oil, which then solidified and was actively cutting off blood supply to his muscles, parts of which were already rotting under his skin.

Doctors advised Tereshin to undergo at least three surgeries to remove it or face amputation and possible death. The first two surgeries went well and removed about 25 percent of the scar tissue and dead muscle and jelly, but the COVID-19 pandemic is dangerously delaying more. 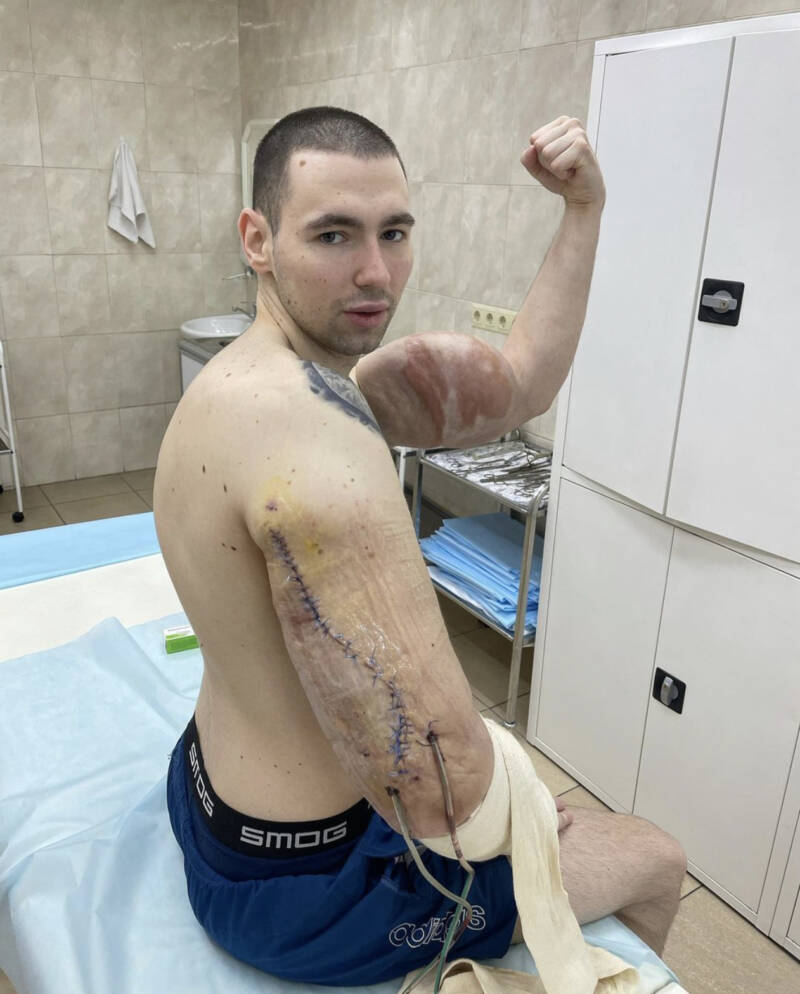 ruki_bazuki_official/InstagramKirill Tereshin has already had two surgeries, each of which went smoothly.

“Soon I will have a very complicated, hard third surgery,” said Tereshin. “I don’t know how it’ll end up. I bulked up my arms when I was 20 due to my own stupidity. I did not think about the consequences. I am very lucky that there are doctors who took me on. God forbid something happens to this nerve and I cannot move my arm.”

Kirill Tereshin initially got everything he had hoped for from the injections. Suddenly, the 20-year-old was wielding arms that measured 24 inches at the biceps.

While the bodybuilder and MMA fighter hoped these injections would give him an edge during his military service, Synthoil oil is merely cosmetic, and injecting it doesn’t strengthen the muscles. Instead, its mixture of oil, benzyl alcohol, and lidocaine causes them to weaken by destroying the tissue.

Bodybuilders like Tereshin most commonly employ the substance on their triceps, biceps, deltoids, and calf muscles. The side effects are anything but slight and include blockage of the pulmonary artery, myocardial infarction of the heart, stroke, nerve cell damage, and infections. For Dr. Melnikov, Tereshin was lucky. 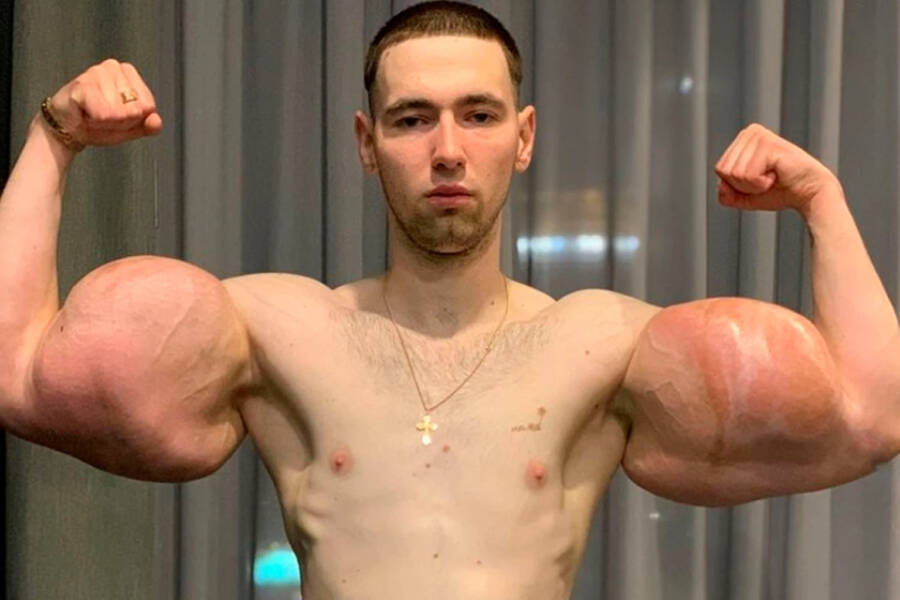 ruki_bazuki_official/InstagramKirill Tereshin hoped injecting the petroleum jelly would help him during his time in the military.

“It saturated the muscle tissue, blocked blood flow,” he said after the first surgery in 2019. “As a result, the tissue dies and gets replaced with a scar which is as tough as a tree. We have seen petroleum jelly injected into breasts, buttocks and others parts of the female body. We are warning that it is extremely dangerous.”

Kirill Tereshin had been desperate for help, yet paying for the complicated series of surgeries proved a serious hurdle. Only after 32-year-old plastic surgery activist Alana Mamaeva helped him raise funding at 23 years of age could the first surgery at Sechenov Moscow State Medical University begin.

Dr. Melnikov explained that about 25 percent of the damaged “scar tissue with fragments of muscles” was removed during that time. According to The Sun, the second round only occurred earlier this year since the global pandemic delayed operations — which is proving to be an ongoing problem for Tereshin.

“I’m only 24, and my immune system is so far coping with this inflammation, but I really do not know what will happen next,” he said at the time. “That is why I started the surgeries to get rid of this nightmare.” 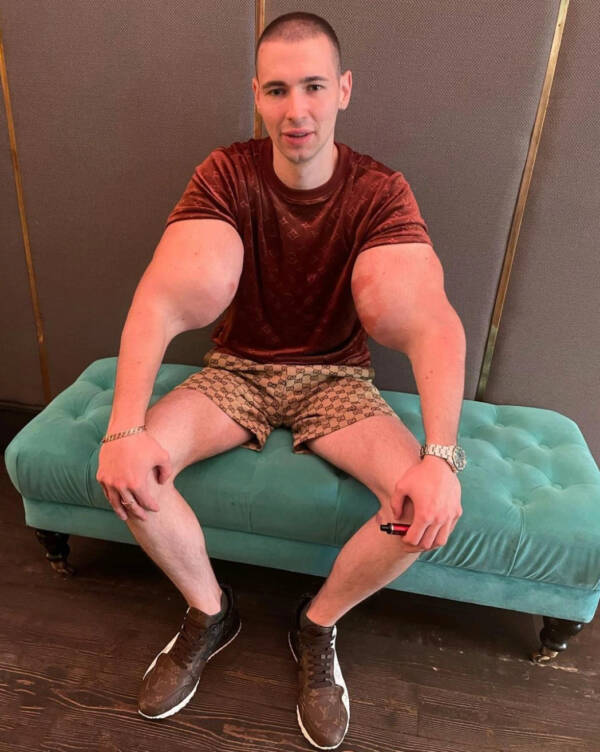 ruki_bazuki_official/InstagramAt age 25, Kirill Tereshin regrets injecting himself and is thankful to have found doctors willing to help him.

At this juncture, Tereshin hopes that the third and final operation on his biceps will go smoothly. Dr. Melnikov will have to carefully avoid damaging the veins and nerves so Tereshin can retain the function of his limbs.

“The hardest surgery will be on my biceps,” said Tereshin. “The nerve responsible for the arms’ sensitivity is inside. God forbid something happens to this nerve and I cannot move my arm… I should have thought about this earlier, I know. I blame myself, I know I’m guilty.”

After reading about the Russian “Popeye” who injected petroleum jelly into his muscles, learn about the man who had surgery to reduce his 11-pound testicles and three-foot penis. Then, take a look at 24 before-and-after photos from the early days of plastic surgery.