After stabbing everyone he could, 24-year-old Kyota Hattori set fire to a train car in a disturbing attack that injured 17 people in total. 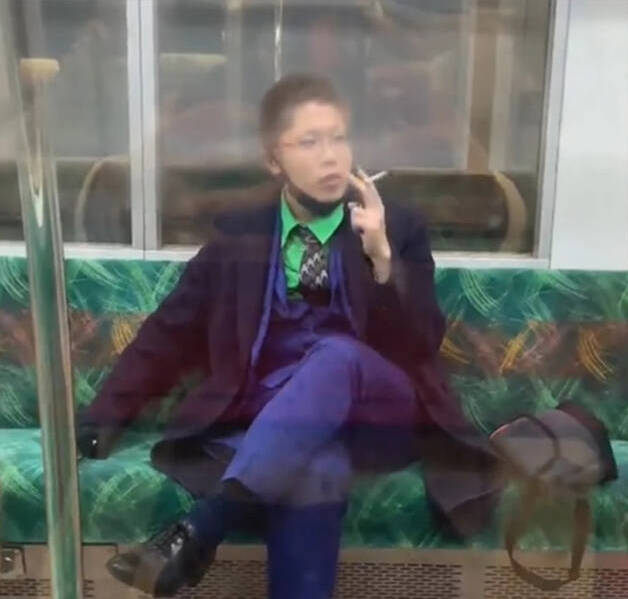 @NewsForAllUK/TwitterKyota Hattori said he went on the rampage because he wanted to get the death penalty.

Though primarily celebrated in the United States, Halloween has become a global tradition. While most trick or treaters around the world came home with candy last night, 17 subway passengers in Tokyo, Japan came home with injuries — after a knife-wielding man dressed as the Joker terrorized them right in the middle of their commute.

According to The New York Post, the incident began at 8 p.m. and occurred on an express train headed for Shinjuku Station. Dressed in a green shirt, a blue suit, and a purple coat, an attacker now identified as Kyota Hattori brandished a 12-inch knife and stabbed a 72-year-old commuter seated next to him in the chest. He then turned the blade against several others.

Most passengers thought nothing of it when Hattori pulled out his blade. According to the BBC, one witness said: “I thought it was a Halloween stunt. Then, I saw a man walking this way, slowly waving a long knife.” 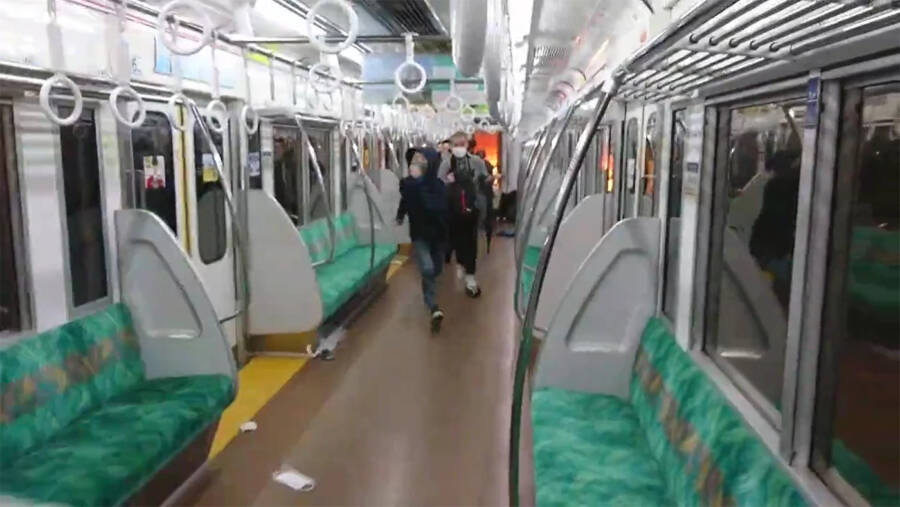 @SIZ33/TwitterThree people were seriously injured, one of whom is in critical condition. The other 14 injured passengers had severe smoke inhalation.

Footage captured by passengers like Shunsuke Kimura showed people running between train carriages. Kimura climbed out of a window and fell onto the platform and hurt his shoulder.

“Train doors were closed and we had no idea what was happening, and we jumped from the windows,” he said. “It was horrifying.”

Footage also showed Hattori smoking inside the train with his legs crossed as authorities responded to the scene. According to The New York Post, firefighters extinguished the blaze as police arrested Hattori, who said he had wanted to murder somebody since June because his social life had fallen apart and he regretted quitting his job.

The Tokyo Metropolitan Police Department announced today that he’s still being investigated on suspicion of attempted murder, with the elderly stabbing victim currently in critical condition with a severely pierced lung. 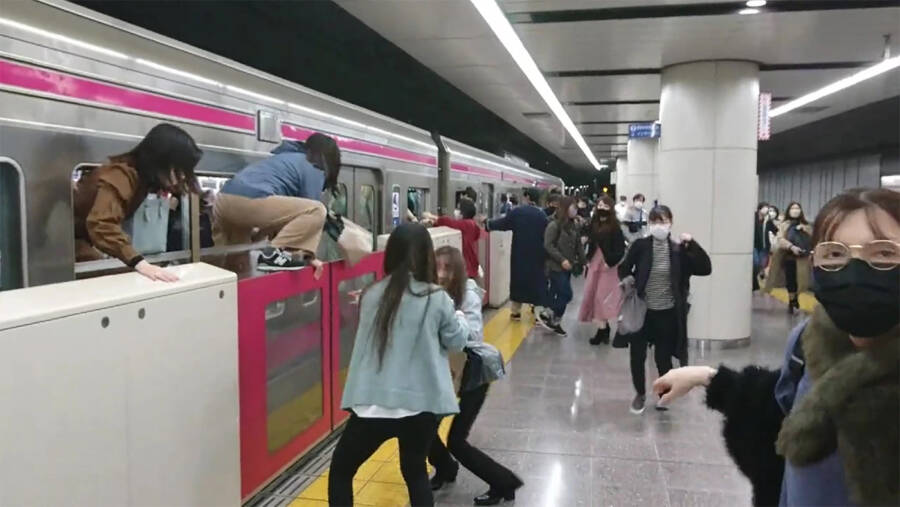 @SIZ33/TwitterPeople were forced to climb out of windows as the doors had been locked after the emergency stop.

The Tokyo Fire Department confirmed that three of the injured passengers suffered serious wounds, while the rest largely endured severe smoke inhalation. According to NPR, police arrived to arrest the attacker, who said he wanted to kill people in order to get the death penalty.

Sunday’s incident was the second knife attack to occur on a Tokyo train in the last three months. The day before the closing ceremony of the Tokyo Olympics in August, a 36-year-old man stabbed 10 people on a train and set a fire with cooking oil. Hattori said he was inspired to reenact that event, and that he used lighter fluid because it spread better than the cooking oil used in August’s attack.

“Looking at the Odakyu Line train case in August, I targeted an express train which would have more passengers and used cigarette lighter fluid,” he said. “I wanted to die. I messed up at work around June and wasn’t getting along with friends.”

“I thought that if I killed two or more people, I would get the death penalty. It didn’t matter who they were.”

It remains unclear if Hattori was directly inspired by the 2019 film Joker, though the parallels are clearer than Hattori’s costume choice. One scene in the film has the comic book villain, as portrayed by Joaquin Phoenix, murder numerous men on a train in a symbolic transformation of his character into the clown prince of crime.

Hattori’s rampage is one in a disturbingly substantial series of knife attacks plaguing Japan in recent years. In 2019, a man used two knives to attack several schoolgirls at a bus stop outside of Tokyo. He killed two people and injured 17 others before killing himself. In 2018, a man knifed a bullet train passenger to death.

In 2016, a former employee at a disabled home killed 19 people with a knife — and injured more than 20 others before being detained. Ultimately, with the amount of footage and number witnesses, it appears rather likely that Hattori will be charged with attempted murder. Whether he’ll get his wish remains to be seen.

After reading about the man dressed as the Joker stabbing Tokyo subway passengers, learn about the haunted house actor who accidentally stabbed a guest. Then, read about cannibal serial killer Issei Sagawa.