The Incredible Story Of Lachhiman Gurung, The One-Handed Hero Of World War II

A Nepalese Gurkha soldier who fought for Britain, Lachhiman Gurung fended off 200 Japanese soldiers in May 1945 — after losing his right hand to a grenade blast. 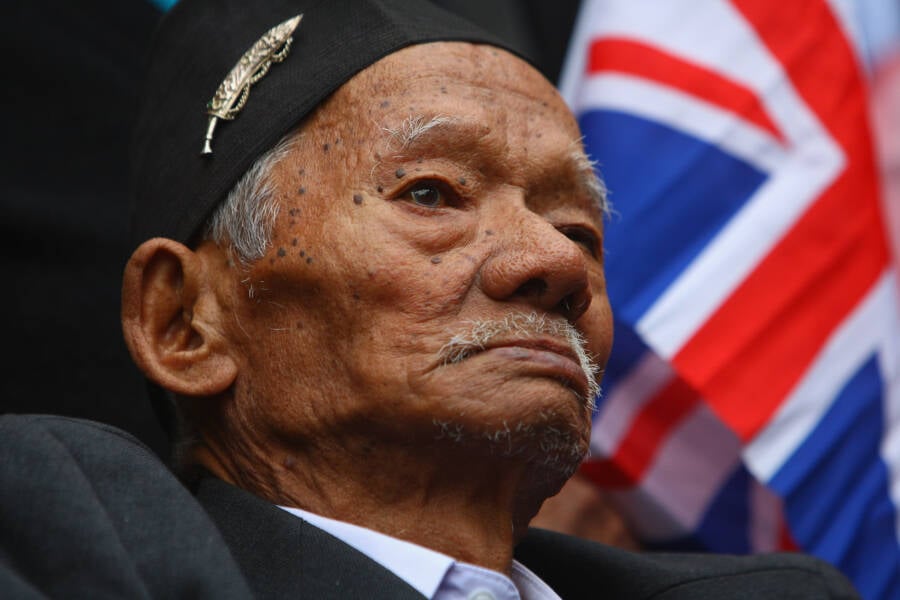 Lachhiman Gurung was a Gurkha warrior from Nepal who fought for the British during World War II. Known for their tenacity in battle, Gurkhas were highly coveted soldiers throughout history. Gurung proved the legends true when, in 1945, he continued to battle his Japanese enemies — even after losing his fingers and an eye.

He would later become one of 13 Gurkhas to be awarded the prestigious Victoria Cross for his heroics during the war. This is his incredible story. 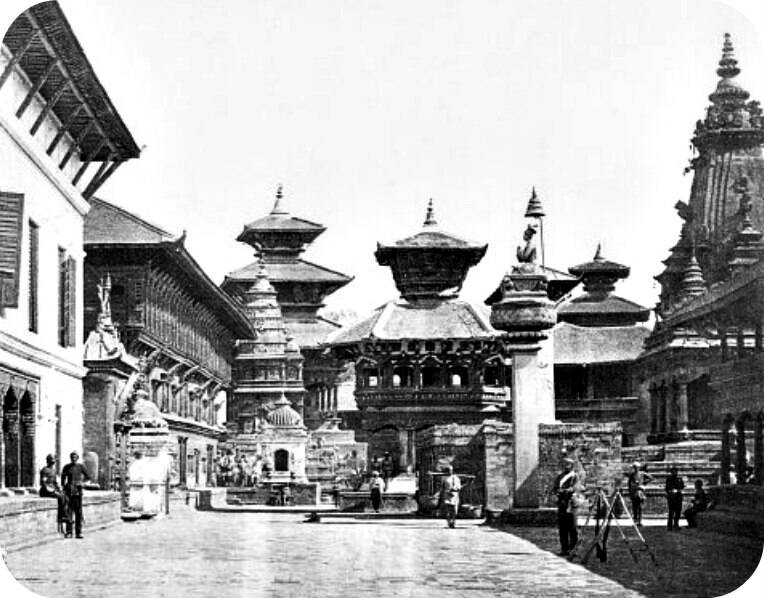 Instagram/MS1940MCCALLThe Kingdom of Nepal, circa 1940.

Lachhiman Gurung was born in a small village in Nepal in December 1917. An apocryphal story tells of Gurung’s father sending the young man out to get cigarettes at the village store one day in 1940. He never got the cigarettes. According to the story, Gurung eventually returned — five years later, blind in one eye and missing his right hand.

Allegedly, Gurung had met a friend in the village who told Gurung that he was enlisting in the British army. The British were urgently recruiting, preparing for the coming war. In one year, Pearl Harbor would be attacked and the Japanese would rapidly advance through Asia.

There was a required height of five feet to join the army, and Gurung was slightly below that. Normally, he likely would have been rejected as a candidate, but with war in the East imminent, the British command accepted him into the Gurkha Rifles unit. 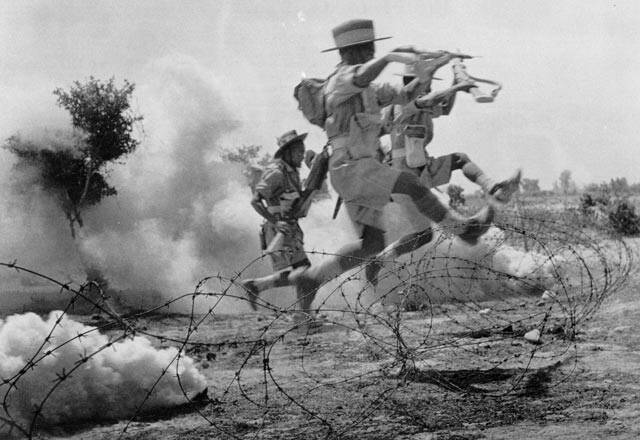 Burma was targeted strategically by the Japanese Empire for two reasons. One was to cut off a major Allied military supply route to China. The other was based in ambition by the Japanese to reach the border of India and provoke a rebellion against the British Raj.

Japanese forces swept through most of Burma in 1942. The British and their colonial allies attempted a counterattack but were repulsed. While over the next few years, Allied forces were strengthened, particularly with increased air power, it remained a stalemate.

Heavy fighting continued into 1945 throughout the thick jungles of Burma. There were attacks and counterattacks by each side. Slowly, the British advanced into Burmese territory, but at a heavy cost. In some regions, every inch of territory was fought over.

Toward the end of April 1945, the 89th Indian brigade, under General Sir William Slim, was ordered to intercept and destroy a withdrawing Japanese force. Some of the units were detached and told to swing around to block the Japanese retreat. And that’s where Lachhiman Gurung’s 8th Gurkha Rifles were sent.

Gurung’s regiment made contact near the Burmese village of Taungdaw — but instead of blocking the retreating enemy, the Gurkha platoon found themselves surrounded and cut off from the main British force by hundreds of Japanese troops.

A Japanese victory at this point would be a major setback for the British, so Gurung’s unit steeled themselves for a fight.

Gurung was put at the most forward position of his platoon on a small hill, with two other men. It was night when they were attacked by up to 200 Japanese infantry in a surprise assault.

A grenade landed near Gurung, but he managed to throw it back before it exploded. When another fell in the trench by his foot, he thrust it back. Then a third landed. Gurung went for it, but the device exploded. His comrades were severely injured. Gurung was also badly wounded in the attack, bleeding, blinded in one eye, with a shattered arm and severed fingers. He was also left all alone.

While many would have given up at this point, Lachhiman Gurung fought on. With his good hand destroyed, he fired and reloaded the bolt-action rifle with his left hand. Wave after wave of Japanese attacks were turned back as Gurung shouted, “Come and fight a Gurkha!” The battle with Gurung went on for four more hours.

The Japanese attacks continued on the isolated Gurkha unit for two more days. It’s unclear how Gurung survived the continuous fighting. But his bravery against overwhelming odds emboldened the rest of the platoon until reinforcements finally arrived. 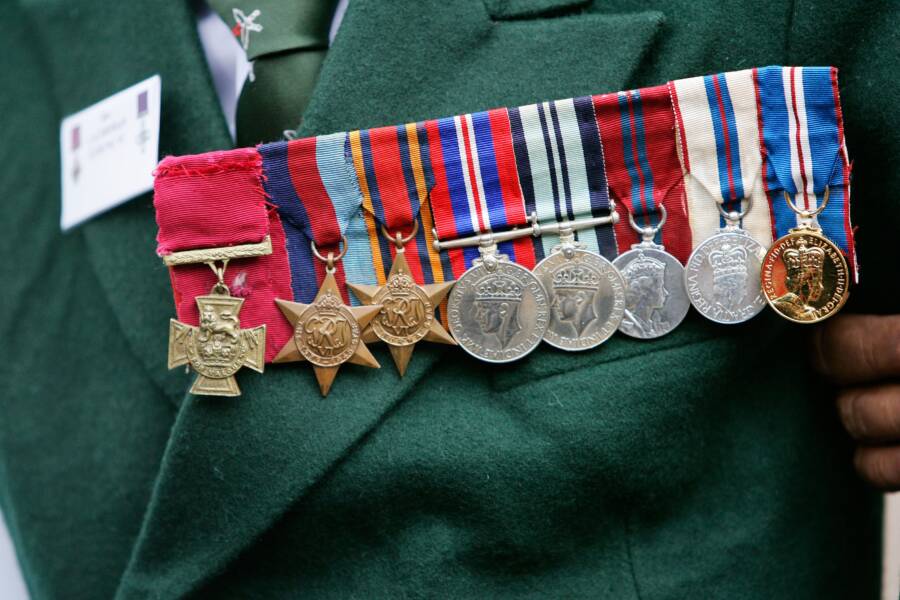 Tim Graham/Getty ImagesLachhiman Gurung wears his VC and other medals while attending ‘A Service of Thanksgiving for Gallantry and Valour’ at Westminster Abbey in 2006.

Not only did Gurung survive the battle — he mowed down dozens, one-handed. Of the 87 Japanese who died in the battle, Lachhiman Gurung had personally killed 31 of them. Thanks to him, the Japanese attack failed.

Wounded, Gurung was taken to hospital. He lost an eye and use of his hand, though his damaged arm recovered. In December 1945, Gurung received the Victoria Cross in a ceremony in India. It is the highest decoration given for valor and bravery in the British armed forces. Gurung was one of 13 other Gurkhas to receive the honor.

Most soldiers would happily retire to civilian life after such an ordeal. Gurung, instead, stayed in the British army until India shook the yoke of British rule in 1947. He transferred to the Indian army where he served a short time before retiring from military life. Then, Gurung came home. He married twice and continued to farm his father’s plot of land in Nepal.

Gurung remained poor for most of his life. His village was isolated and collecting his monthly veteran’s pension was challenging. There were long distances to travel, but British aid organizations built a new house for him in the 1990s.

What Happened To Gurung After His Military Service?

For the rest of his life, Lachhiman Gurung advocated for Gurkha veterans. He often traveled to Britain on behalf of veteran causes, always wearing his Victoria Cross proudly to public meetings.

One of Gurung’s causes was for the right of Gurkha military veterans and their families to settle in Britain. The campaign eventually succeeded. In 2008 Gurung himself moved to London where he lived until his death in 2010 at age 93.

The Burma campaign has been called “the forgotten war.” Although it was fought bitterly over four years in harsh environmental conditions, it was never considered decisive to the outcome of World War II. Like the Burma campaign, Gurung was one whose story was mostly forgotten. Yet, he singlehandedly performed one of the most heroic actions in all of World War II.

“I had to fight because there was no other way,” Gurung would later say. “I felt I was going to die anyway, so I might as well have died standing on my feet. All I knew was that I had to go on and hold them back.”

After reading the remarkable story of Lachhiman Gurung, learn about Min Bahadur Sherchan, the former Gurkha who scaled Mt. Everest. Then, discover some of history’s biggest badasses.